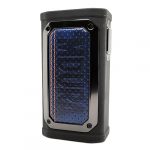 The Wotofo MDura Pro is a new box mod from popular manufacturer Wotofo. Wotofo is a company that is typically known for producing rebuildable tanks. In fact, they’ve produced what are arguably some of the best RDA, RTA, and RDTA’s on the market; the Profile 1.5 RDA, the Profile Unity RTA, and the Profile RDTA are just a few of their many excellent rebuildables.

Lately, Wotofo has been dipping their toes into the wider reaches of the vaping market. They offer a sub ohm tank with their NexMESH Pro tank (widely considered the best sub ohm tank on the market), and they even have a few interesting pod vapes out too, like the Manik Mini and SMRT Pod Kit. The one product that was missing was a regulated box mod (yes, they offer the Dyadic, but that’s a squonk mod).

The MDura Pro’s specifications look really good for being Wotofo’s first regulated mod. It’s a dual 18650 battery mod that is IP67 rated to be water, dust, and shock resistant. It has a large full color screen and it can fire up to 230W. The MDura has 3 wattage modes, as well as Temperature Control modes with adjustable TCR. It also has a memory mode.

This device was sent to me by Wotofo for this review.

This may be Wotofo’s first regulated box mod but you would never know that from the design and build. The build quality is excellent. The MDura Pro is made from a combination of zinc alloy for the frame, buttons, and trim, rubber for the shell, and leather for the back panel. The whole mod is precisely assembled and feels very solid to hold.

For a dual 18650 battery box mod, the MDura Pro is large and a little bulky but this probably has to do with the shock resistance. It’s 47.4mm tall wide, 88.1mm tall, and 33.1mm deep and it weighs a hefty 195 grams. Despite the size and weight, it is comfortable to hold and feels like it can take a few drops. Again, it just feels like a solid mod.

The rubber shell that surrounds most of the MDura Pro is very firm and doesn’t squish or have a lot of give to it. Unfortunately, this rubber shell also picks up a lot of lint so it’s hard to keep it clean. The zinc alloy for the trim and buttons is a shiny gunmetal. This is the same no matter which color of Mdura Pro that you get. The trim creates a frame that surrounds the screen and the leather back panel.

The back panel says MDURA and features dual line accent stitching that runs vertically. The leather pad is perforated and overall it looks and feels good. This panel does have a fair amount of squish to it. I’m almost sure that it isn’t real leather but it looks the part enough that I don’t mind if it isn’t.

The MDURA Pro comes in 5 colors that, for some reason, are mostly prefixed with “King Kong”: King Kong Black, King Kong Blue, King Kong Red, King Kong Orange, and Retro Red. I’m not sure what King Kong has to do with anything but I like the colors. The only thing that changes between the colors is the color of the back panel and the accent stitching. The exception to this is the Retro Red which also gets you a red rubber shell.

Up top on the Mdura Pro is a rather wide 510 plate. This mod can take atomizers up to 31.5mm without overhang; good news for those of you that like using massive tanks. The 510 connector features a spring loaded pin and atomizers thread smoothly in or out of the mod.

The MDura Pro has one of the nicest, clearest screens that I’ve seen on a vape mod. It’s a 1.2” TFT screen that is full color and sports a high pixel density. The layout of the UI is well done. You can change the color of the UI by pressing the fire button and down button simultaneously.

Underneath the screen are 3 buttons. One is the menu button and the other two are adjustment buttons. These buttons are the same gunmetal color as the screen. The fire button is a large rectangle shape and it’s located on the side of the MDura Pro. The location and size of the button makes either index or thumb firing feel natural. All of the buttons feel good and give an audible click when pressed.

The battery door for the MDura Pro is spring loaded. The latch that holds the door closed is quite sturdy, as are the door hinges themselves. It doesn’t feel like these are going to break easily. There is no battery rattle when batteries are inserted.

The battery door also has venting holes that are sealed by two rubber holes on the inside, to retain the waterproofing. These rubber holes are spring loaded though and will open up to let the gas escape in the unfortunate event that your batteries vent. Each battery slot is clearly marked with positive and negative, something that I love to see.

I’m super impressed with the design and build of the MDura Pro. The mod is a little chunky and heavy but it’s an excellent looking mod that has been built to exacting standards. Not one component feels cheap or out of place and there are no build quality flaws to speak of. If this keeps up for the performance then this could be a top-notch box mod.

The main feature of the MDura Pro is that it is IP67 rated to be waterproof and dustproof. This means that it’s completely sealed against dust and can be submerged in up to 1 meter of water for up to 30 minutes. The MDura Pro is also shockproof and can withstand being dropped and still keep on functioning.

The UI is really clean and clear. It has individual battery indicators with battery life in percentage, a useful feature. The wattage is displayed in large numbers and takes up a decent portion of the screen. Under the wattage is the current mode, followed by the output voltage, resistance, a puff counter, and puff time. You can change the color of the UI by pressing the fire button and down button simultaneously.

The MDura Pro takes dual 18650 batteries and can fire up to 230W in either power or TC mode. It comes with 3 power modes, standard, power, and power+. It also comes with 3 TC modes:

Clicking the menu button once will turn on or off the screen. This is useful if you’re in a dark room or if you’re trying to be stealthy (although it’s going to be hard to go unnoticed with this big box mod).

A useful mode is the Memory mode. Here you can set 9 preset wattage modes that you can easily switch between by pressing the adjustment buttons. This is useful if you tend to vape at only certain wattages because you use the same types of coils in your rebuildables.

For a mod like the MDura Pro, I’m surprised to see that it doesn’t have variable voltage mode, nor bypass modes. I would also expect there to be some sort of menu where you can change things like the brightness of the screen but there’s no such menu. 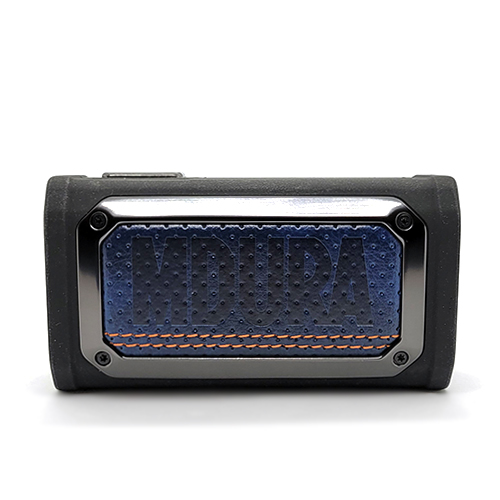 First up are the water and drop resistance tests. I started with the water resistance test first. I have a bucket that I use for washing my car so I filled it up with fresh water all the way up to the top. This bucket is about 30 inches tall — more than tall enough to fully submerge the MDura Pro. I removed the tank, left the batteries in, and left the mod on, and dropped it right into the bucket. I left it there for about 20 minutes before taking it out.

When I first dropped it in the water I saw some bubbles coming out from the bottom of the mod and that concerned me. I pressed all of the buttons while it was underwater and air bubbles came out from the fire button too. When I took it out, I dried it off and looked inside the battery compartment — completely dry.

Some water did enter into the battery door through the venting holes, but none of it made it into the actual mod because the inside of the door is sealed with rubber. No water made it into the device at all. The leather backing was moist for a bit afterwards but the device was unharmed. I made sure to thoroughly dry the 510 connector and reattached my tank and it vaped just like normal. Nice.

For the drop test I dropped the MDura onto the ground outside a couple of times. While the device did get scuffed up a bit on the rubber shell and plastic that covers the screen, it survived all of the drops and still functioned as if it never happened.

As for the vaping performance of the MDura Pro, I’ll start with the power mode performance. I used the standard power mode the most. There’s no description on Wotofo’s website or elsewhere about what the other two power modes do, but it seems like they preheat and boost the wattage slightly. Power and Power+ modes hit a bit harder than standard wattage, but I kept it in standard for the most part because it felt like it accurately output the set wattage.

The MDura Pro fires the instant that I press the fire button and delivers consistent power until I let off of the button. Even with very low resistance builds and wattage set north of 110W, it hits hard and consistently.

Even Temperature Control mode is good on this mod. I wouldn’t say that it’s as good or accurate as a DNA chip mod but it’s not far off. The temperature output is consistent, as is the power delivery. When the wick is drying up, it cuts/reduces power accordingly. I did not have a dry hit or even anything close to one when using the TC modes on the MDura Pro, and it also didn’t seem to cut power too early either. Solid TC performance that is a step up from most of the rest of the competition in the box mod space.

Wotofo’s MDura Pro is an awesome dual battery box mod. It has the looks, the build quality, and the performance to back it all up. The only real cons with this device are that it’s a little chunky and heavy, but that’s the tradeoff for the water and shock resistance. The performance in power mode and TC mode is exactly what you would want from a box mod: fast firing, consistent power, and accurate output. There’s not much more you can ask for from a box mod.

Do I recommend the MDura Pro? It’s going to be a yes from me. If you’re on the hunt for a new box mod definitely check this one out.