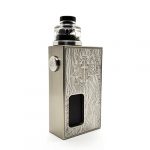 Vandy Vape is undoubtedly one of the biggest and most well known Chinese vape companies around. They have produced pretty much anything and everything imaginable in the vape industry that you can think of, from rebuildable atomizers to vape mods and everything in between.

Squonking has been a relatively quiet part of the vape scene for the past couple of years; Vandy Vape was arguably responsible for the boom during 2016/17.

Their release of the original Pulse Squonk mod associated with Tony B was the first mass produced, affordable squonk mod. This series still has new releases to this day, and has been offered in both mech and regulated formats. Recently there has been the odd squonk mod here and there, but for the most part, they have been kept firmly in the realm of expensive high-end devices, with a couple of exceptions.

Enter Vandy Vape and vape reviewer El Mono Vapeador with the Requiem Kit. The Requiem RDA was a 22ml RDA released at the start of this year, a single coiler aimed at the squonk market. The Requiem is an RDA I never reviewed, and it has been a minute since I have used a mech squonk mod, too, so this should be fun!

Please note: Battery safety and a knowledge of Ohm’s law are essential before attempting to use a mechanical device.

Let us take a look… 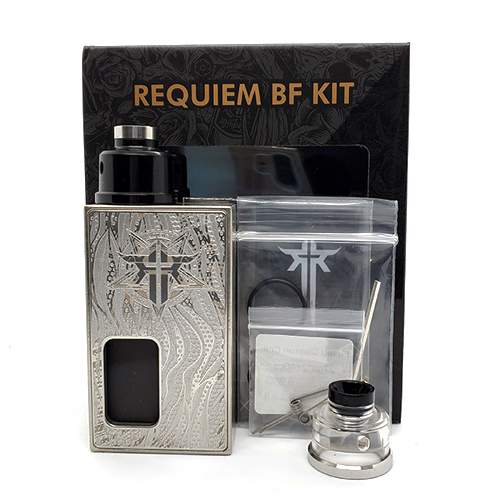 As I said in the intro, it’s been a while since I have used a mechanical squonk mod; however, it was at one time my favorite way to vape, so I have been looking forward to this one.

I must admit I did not expect to be as impressed as I have been with the build quality. The Requiem kit is heavy, feels super solid in your hand and has some intricate and well-engraved details on the door.

It all slots together very nicely; the door can be a little tough to remove due to its thickness and the fact that it has a little rubber seal around it. But there is no rattle on the door at all, and the magnets are strong, so I will take that.

Inside, the device is immaculate and straightforward; the machining throughout is again very nice. My only gripe would be that there is no easy way to remove your battery! This is potentially a big con for some; I had to give the mod a whack on my hand to remove it, and being as solid as it is… it really hurt! This is going to be a con for me.

If you need that battery out quickly for safety reasons or just to change it, you will struggle, unfortunately. It would have been straightforward to put a battery removal tab in there or a slot on the other side to push it back out. I love that they included battery wraps, but this may just be because they are confident that yours will end up ruined during the removal? Either way, this could have been better.

The Requiem RDA is new to me, I didn’t get the chance to own or use the previous incarnation, but I had heard good things about it.

It’s a very simple single coil RDA and very easy to build on. Your coil sits right down the centre with large , flat head post screws to secure it in. Airflow is a side hitting affair; the biggest coil I would suggest is a 2.5mm ID. Any bigger, and you are struggling for space/airflow.

Again the build quality is excellent, not sure that I’m a fan of the plastic caps and they will be a tough fit to begin with, but either way, they do the job and the RDA looks aesthetically pleasing with the inclusion of the beauty ring. 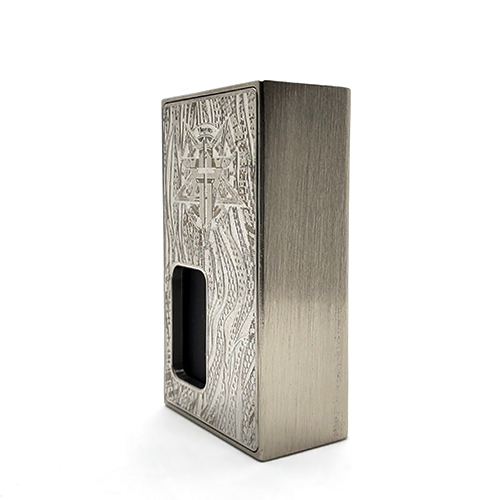 Inside the mech is as simple as you would expect; the 510 is not spring-loaded, so depending on the RDA you are using, you may have to adjust the 510 up or down to make contact with the pin; this sounds a little more complicated than it actually is though. Adjustments are very easily made by turning the silver adjuster with your thumb.

Also, housed around the 510 is a manual locking switch that prevents the device from firing when in your pocket or bag. Again, it’s really simple to just swivel it around and prevent the fire button from making contact.

As for the RDA wicking, it really couldn’t be any easier! Just trim to the edge of the deck and it will be perfect. Adjusting the airflow is tough to begin with — those o-ring tolerances are tight. But after a while, they will loosen. 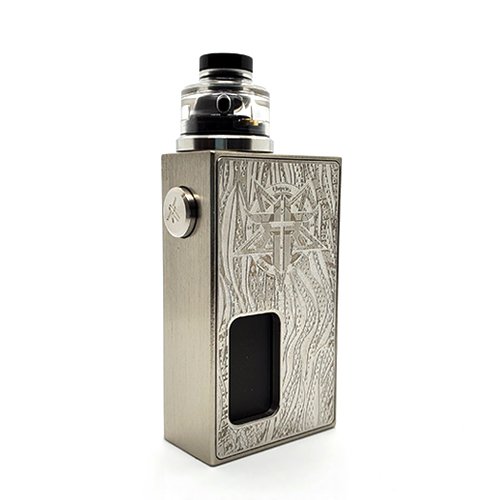 This Requiem kit has impressed me! I’m just going to put that out there; it has reminded me of all the things that I really loved about squonking and using a mech squonker; it’s not without its faults though…

I did find the airflow on the RDA to be a little turbulent and it definitely has a whistle. This did improve with some placement adjusting but I think there are better RDA’s out there. However, the flavor from this thing hits the spot. The coil is so close to your mouth that there’s nowhere else for it to go. I didn’t really have any issues with spit back and if I did, it was firmly a case of my own fault for over squonking; once you hit your stride with this RDA though, it’s lovely.

The mod itself does everything that it should; the throw on the button is a little spongy, but this is part and parcel of a small mech squonk mod and I don’t have a problem with that. I vaped the included coils and both turned out at a 0.3ohm build (always build on a tab or regulated device, please!) My Sony VTC 5A’s held up brilliantly for this build. It’s a warm, dense and enjoyable vape, so there’s really no need to go any lower… Remember people… SAFETY FIRST!

I love the fact that the squonk bottles are square! This makes for a nice flat surface up against the doors that looks really lovely, and the bottle tolerances are perfect. You only need a slight squeeze to fill the little RDA juice well (it’s only around 1ml deep) so go easy on it.

There are three methods of filling the bottle; there is a rather handy rubber bung on the side of the bottle top. You can fill straight down the tube or via the traditional method, filling by removing the cap. I found removing the cap easiest by far but experiment for yourself. I may just be a dinosaur and stuck in my ways.

As previously stated, I did find the airflow on the Requiem to be a little turbulent and had a whistle. I was able to troubleshoot this and reduce it, but it still didn’t blow me away. Of course, this is all relative to the size, but you will get more than you expect, that’s for sure. Cutting the airflow down is a challenge and I found it again created a whistle.

Don’t be fooled by the small airflow holes; this RDA is quite airy when fully open. Full open is how I enjoyed it the most, but this is subjective.

For such a small kit, you can’t help but to be impressed by the cloud production here; it’s a very satisfying vape.

You see, it’s been a long time since anything like this hit the mass market — a kit for the hobbyist, for the enthusiast, and an absolute blast from the past. Thank you, Vandy Vape and El Mono Vapeador, for releasing a kit that reminded me of all the reasons I fell in love with vaping in the first place.

There’s only a couple of cons to this kit and, on the whole, I really enjoyed it. All in all, I feel as though this kit has taken me back somewhat to earlier, simpler times. Times before flavour bans and vaping being a target, and for that, I am really grateful.