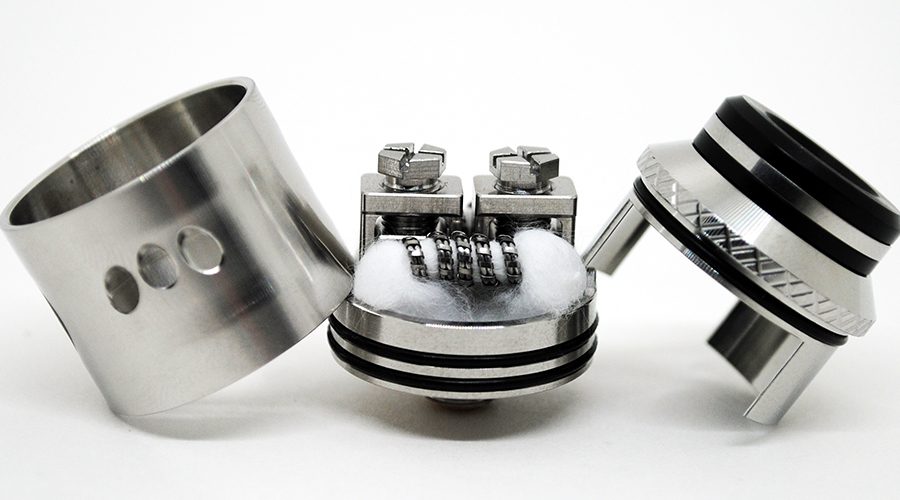 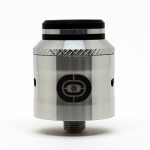 The Occula RDA is a joint collaboration between Augvape and well-known coil builder Twisted Messes. Twisted Messes makes some of the largest and most complex coil builds, so it should come as no surprise that this RDA is specifically meant to cater to those who like using oversized, exotic builds.

The Occula features a spacious build deck with clamp style-posts that will fit even the largest coils. It’s a dual coil RDA and comes squonk ready with a 510 BF pin. It’s also got an interesting airflow configuration that can be adjusted in a multitude of ways.

The design of this RDA had me interested from the first time that I laid my eyes on it and it’s proven to be a great RDA in the time that I’ve been using it. This RDA was sent to me for this review, directly from Augvape. Let’s jump right into it. 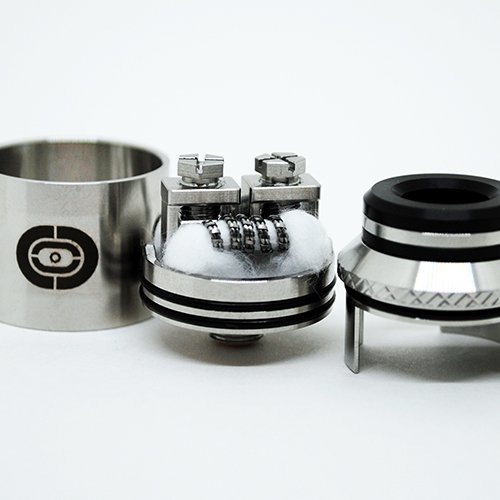 The Occula is a pretty simple looking RDA on the outside. It’s nothing too fancy and I like that about the design. However, the body of the Occula is slightly curved in the center and this gives it a subtle but cool look. There’s a single “Occula” logo on the body of the RDA and it reminds me of an ancient, hieroglyphic-like eye. I think that this is where they got the name from, deriving it from the word “ocular”, but I can’t say for sure.

I got the silver color sent to me for this review and I think that I prefer it over the black (the only other available color). It matches my Druga Foxy mod (also by Augvape) really nicely and looked right at home atop some of my other silver mods as well. Plus, the silver makes the logo stand out whereas the logo on the black variant is almost impossible to see.

The Occula comes with a single wide bore 810 drip tip. It’s a pretty short drip tip and it’s got a thin metal ring that runs along the center of it. It looks really nice but I would have preferred it to be a little bit taller. Reason being: the Occula got pretty hot during my use because of the high wattages I was pumping through it and my lips were getting uncomfortably close to the scorching hot top cap.

Speaking of the top cap; like most RDAs it’s used on the Occula to adjust the airflow. There’s knurling along the edges of the top cap which makes it easy to turn it and it’s not too tight at all. It’s effortless to adjust and I had no trouble doing so.

There are three holes for airflow on each side of the Occula. They’re oval shaped and the cutouts are slanted downwards to make the airflow hit the coils better. The airflow can be adjusted to close off any number of holes (mirrored on each side), or you can close off just one side for single-coil use.

I think the airflow setup on the Occula is great as it provides a good and open draw with all of the holes open and a noticeably more restricted draw with two holes closed on each side. Plus, the downward slant of the holes means that if you position your coils right, you’re able to have the airflow hit the bottom and then move upwards. This makes for excellent flavor.

Another great thing about the airflow on the Occula is that you’re able to twist and adjust the mid-cap. So no matter how many airflow holes you close off, you can still center the remaining open holes on your coils.

One con I found with the Occula was the O-rings that connect the mid-cap with the build deck. They’re super tight and this makes it hard to secure the mid cap onto the deck without lubing it up first. It’s not a huge issue but these O-rings could’ve been better for sure.

The hallmark feature of the Occula is it’s wide and spacious build deck. This RDA was created specifically to accommodate to large, exotic coil builds and there’s definitely enough room to fit em’ — it’s truly a coil builders dream deck.

There are two posts located in the center of the deck. These are some big and beefy clamp-style posts and they give a tremendous amount of room to fit even the thickest coils.

These clamps are top secured by some of the biggest screws that I’ve ever seen. They’re M3 screws that can be tightened with either a Phillips or Flathead screwdriver and they’re integrated into the clamps. You can’t take these screws out and this is why there are no replacement screws included with the Occula. I would be careful not to strip them (although they’re so thick it will be pretty difficult to do so).

Building on this deck can be a little difficult until you get the hang of how to do it. Because of the clamp-style posts, both coils will be held in place by the same terminals. Coiling rods, or something to hold your coils in place, make it a lot easier to position them properly. I also found that it was a good idea to trim the legs extremely short to make positioning them a bit easier as well.

The clamps hold the coils firmly in place, no matter the size of them. These clamps are large and strong and once your coils are secured they aren’t going to move an inch.

For optimal performance, you’ll want to have your coils raised a bit to align with the airflow holes. Once your coils are clamped down and secured, raising them isn’t difficult at all.

The juice well is a respectable size on the Occula at 5mm deep. This gives you enough room to drip and squonk, however I wouldn’t overdo it. The airflow holes are pretty high-up on the tank but I did have some leaking when I got a little too zealous with my dripping.

Although the deck is meant for large coil builds, regular coil builds still worked well for me. I installed large alien coils, staggered fused claptons and regular round wire builds on this build deck. 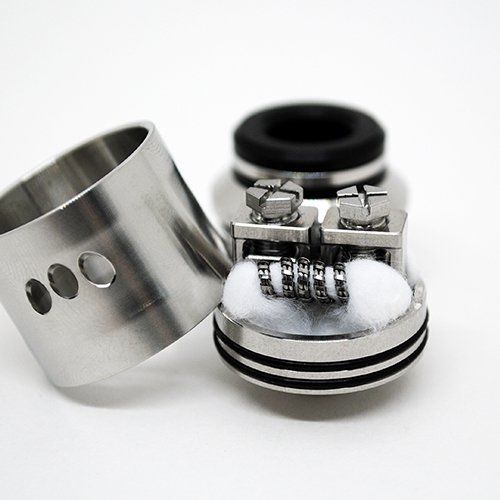 The moment you’ve all been reading for: how does the Occula vape? The flavor is very good with this RDA, definitely comparable to some of the top RDAs out there. However, there’s a catch: this is an RDA that requires large dual coils to get the most out of it, which in turn means that you need to run a lot of power through it as well.

With a pair of alien coils that ohmed out at 0.13 ohms I started it off at 90W. It was producing decent flavor but I could feel that it still needed more power. I then ramped it up to 120W but I still wasn’t getting what I thought it should be delivering.

Only once I pushed it up to 140-150W did the flavor and clouds really start to shine through. At this wattage the flavor was bangin’ and the clouds were humongous. The vapor was very warm, though not too hot, and with the airflow fully open it was what I would consider a perfect vape. This is a lot higher wattage than what I would normally run but it seemed to be necessary to get the most out of this RDA.

With the airflow restricted down to two holes open per side it delivered a noticeably tighter direct to lung draw. I did have to bring the wattage down a tad to prevent it from getting too hot, but I think that those who like a slightly tighter DTL will be happy with the airflow configured in this way.

An important note: this RDA gets super hot. Because of the high wattages I was pumping through it, the Occula became scorching hot; it was to the point that I had to be careful not to burn my lips on the top cap. This was made even more difficult due to the short drip tip.

With a small, regular round wire build it wasn’t bad at all flavor-wise but it was definitely not the same as with the large coils and high wattage. It was a similar story when I used only a single coil. This is an RDA that needs dual exotic coils and high wattages to deliver the best performance.

As for squonking, the Occula is decent but I did have some issues with over-squonking. The juice well is respectable at 5mm deep but if you overdo squeezing your squonk bottle you’re going to have leaking. In my opinion, this is an RDA that’s best used as a dripper. And when you look at its form factor and old-school design, the Occula certainly fits the bill as a pure dripper RDA.

Would I recommend the Occula RDA? It’s both and a yes and no. It’s a definite yes if you’re into building/using large coils and want a dual coil RDA that can handle extremely high wattages. The flavor is excellent when used in this way and the adjustable midcap means that you can find an airflow setting that works just right for you and your style of vaping.

If you tend to use regular coils and/or want something that will perform at lower wattages, I would probably pass. While the Occula isn’t terrible when used at lower wattages and with single simple coils, there are better options out there.

What do you think about the Occula? Let me know in the comments.