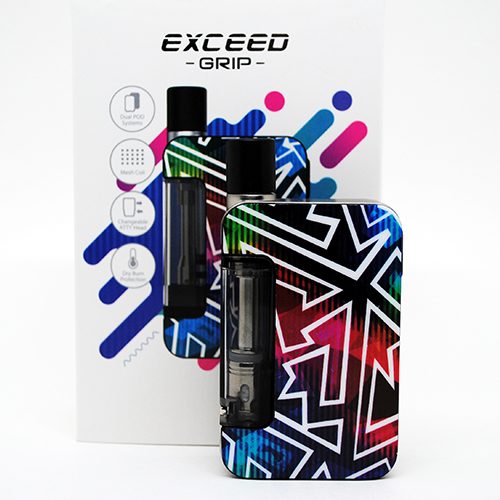 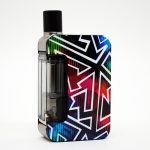 The Exceed Grip is a small pod device from manufacturer Joyetech. It’s boxy design is different from most other pod systems and it features two mis-matched panels that give it a neat look. You can get it in a variety of different designs and patterns where one side has a colorful design and the other has a black and white pattern. There are also more reserved, traditional color options available.

You get two pods with the Exceed Grip and each caters to different draw styles and e-liquids. One is a cartridge that uses replaceable coils meant for use with regular nicotine e-juices and offers a tight DL draw. The other is a traditional pod that uses built-in, non-removable coils that are meant for use with nicotine salts and provides a loose MTL draw.

But the feature that got me the most curious is that the pods are said to have dry burn protection! Joyetech say that this will throttle the temperature to avoid dry hits and this got me super anxious to test it out and see if it worked. 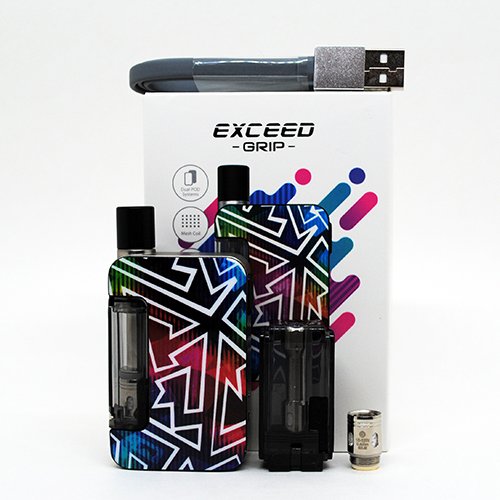 The Exceed Grip is a tiny device at 74mm tall, 40mm wide and 21mm thick. It’s almost like a miniaturized box mod. It fits nicely in between my thumb and index fingers and it’s comfortable to fire from this position.

The overall build quality is good. It’s a well-built device with all of the components feeling very solid. I’ve dropped it a few times onto the floor from standing height and while it’s got a few scratches, nothing is cracked or broken.

I really like the color and design that I received; it’s got a multi-colored panel on one side and a black and white scribble design on the other. It definitely stands out a lot more than other AIO/pod devices and I received numerous compliments on it during my use. If you’re looking for a pod vape as well as a conversation starter then this device is a good choice.

The drip tip is a removable, narrow 510. In theory you can replace this with another 510 but I was happy with the one that comes on the device. The firing button is almost identical to the one on the Atopack Magic. It’s got a nice click to it and isn’t too stiff nor too easy to push.

Two pods come included with the device. The first is a pod cartridge that uses replaceable 0.4ohm mesh coils and provides a tight direct to lung draw. It’s not tight enough to be considered MTL though. This cartridge will hold up to 4.5ml of eliquid and that’s a pretty considerable amount for a pod. The second is a traditional pod that has a 0.8ohm mesh coil built in. This second pod has a much tighter draw than the cartridge but I would consider it a loose MTL. This one will hold slightly less eliquid at 3.5ml.

The pods have a slight tint but it doesn’t affect visibility. You can clearly see the amount of ejuice you have left even when the pod is in the device and that’s always a plus.

Both pods are inserted with a firm push into the side of the device. They fit in nice and snug and once the pods are in they don’t have any wiggle or rattle at all; they won’t be coming out without you intentionally trying to remove them. It takes quite a bit of force to remove them but I like their overall fit and finish.

Both the pod and the cartridge are filled in the same way. There’s a small rubber stopper near the bottom of the pods. Open this stopper to access the fill port. It’s pretty simple to fill either the pod or the cartridge and I had no issues doing so. I also had no leaking from around the stopper so it’s quite a secure port. 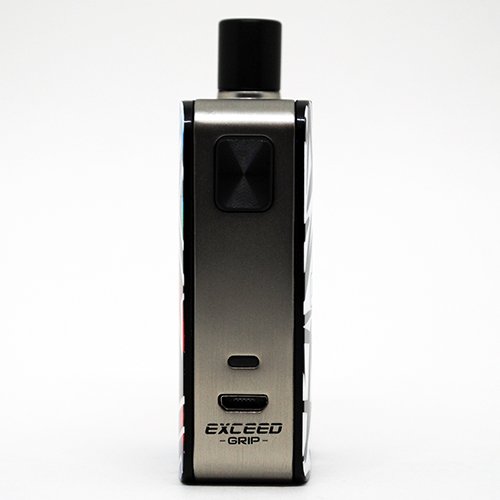 The Exceed Grip has a large battery for such a small device at 1000mAh in size. When you combine this with its low constant output voltage of 5V  you get pretty lengthy usage times without recharging. The Grip fires from 10-13W depending on the pod that you use.

There’s a battery life indicator on the face of the device that indicates your current battery charge level. It will be lit up white if the battery percentage is anywhere from 20-100%. When the battery gets below 20% charge the light will be red.

This battery indicator also serves to indicate when the dry burn protection is activated. This feature only works when using the traditional pod with 0.8ohm mesh coil. If the device senses the wick is too dry the battery indicator will flash red twice before cutting off power.

Charging times could be improved with this device. Although it took me quite a while to get the battery fully drained, it also took quite a while to recharge. I timed just over an hour and a half for a full recharge. 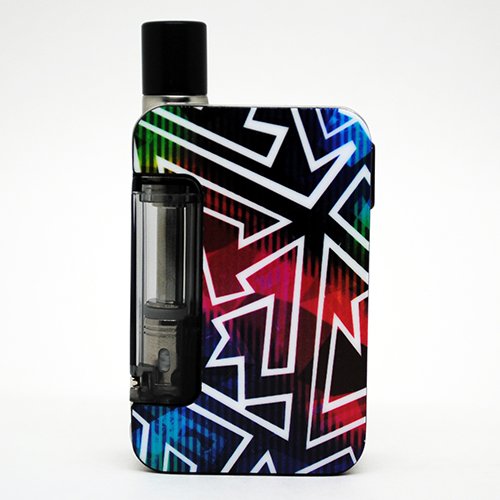 The performance of this device is fully dependent on the pod that you use. I had a great experience with the traditional pod and its dry burn protection. On the other hand, I had mixed performance with the cartridge that takes replaceable coils.

Pod Cartridge: This cartridge uses the replaceable EX-M 0.4ohm mesh coils. I had high expectations for these coils and at first it was okay. I was getting decent flavor and the vapor was warm though not overly so. However, after just a few refills I had a noticeable drop off in flavor which brought these coils to below average. It’s strange that the flavor would drop off so quickly and it happened across both of the included 0.4ohm coils, so it doesn’t seem to be just a bad coil.

The draw on the cartridge is quite loose and I would say it’s a tight direct lung draw. It’s not my cup of tea but it’s nice to have a pod device where you have options for your draw style (if only this pod performed better).

In addition, the wicking wasn’t that great. I started getting what seemed like dry hits after my first two refills and I wasn’t even drawing that long or consistently. I used an 80/20 VG/PG ejuice for my first fill and then 60/40 VG/PG thereafter. It sucks when such a good looking device performs so poorly but I had hopes for better performance with the traditional pod.

Traditional Pod: Thankfully this pod was completely different in its performance. I got above average, good flavor out of the built-in 0.8ohm mesh coil. It’s not quite as flavorful as some other pod systems like the Aspire AVP but it’s certainly good. I’ve gone through 5+ refills with this pod and it’s only slightly less flavorful than when I started using it. These pods have way better longevity than the replaceable coils and they definitely save this device from a failing grade.

The draw on this traditional pod is a loose MTL. It’s not as tight as the draw on the Moti but it’s much tighter than the Smok Nord. I liked the draw a lot and it brought out the flavor much better than the cartridge for sure.

Wicking was great with this pod. It seemed to take anything I filled it with and vaped without a hitch. The dry burn protection also worked surprisingly well. I had to take long, successive hits where I was trying to get it to protect before it kicked in. After the dry hit protection is activated though, I did have to wait a minute or two before the coil resaturated before it could be used again. It should go without saying, but I experienced no dry hits or burning of the coil with this traditional pod. It’s this kits saving grace. 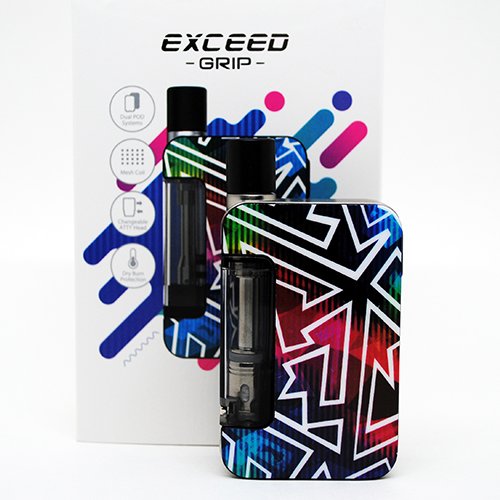 My verdict on this kit isn’t quite as straightforward as a yes or a no. While the traditional pods worked terrific and the dry burn protection works exceedingly well, the cartridge with replaceable pods turned out to be a straight disaster for me. They don’t wick well and they lose flavor quickly. As great as the traditional pods are, a kit that comes with two pods and two coils isn’t worth grabbing if they don’t all perform to an average level.

Until Joyetech improve the coils for the cartridge, I would hold off on getting this kit. I had great experiences with the traditional pod but I don’t think that it’s enough to justify purchasing this device.

What are your thoughts? Let me know down below.