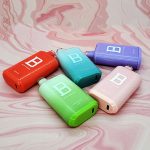 Biffbar 6000 disposables manage to cram a lot of goodness into a small, stylish shell. However, it’s a shell that quickly shows signs of wear, even if you’re careful with it. I do like the design though and the small size makes it easy to carry around two or three of these at once. That’s great if you aren’t happy with vaping on the same flavor day in and day out.

The draw is really smooth for a 50mg disposable so that’s a key point to keep in mind when deciding on if you should purchase these or not. They aren’t going to provide a strong throat hit, but the vapor goes down easily and they still provide the satisfaction that you would expect from a 5% disposable.

It sucks that I didn’t get to try out any of their most unique flavors but the ones that I did try were a pleasure to vape. For a disposable vape that does the job and which looks good doing it, you really can’t go wrong with the Biffbar 6000.

If you haven’t heard of Biffbar yet, they’re a disposable vape brand that, while new, has a fair bit of experience under their belt already. Their parent company is CoilART, who themselves are known for their DIY vape products.

Interestingly, Biffbar is not only a disposable vape brand but, according to their website, also aims to become a vaping fashion brand. As to what this means, your guess is as good as mine, but apparently they conduct research on global fashion trends and apply these findings to product design to make their products more fashionable.

The Biffbar 6000 is one of their latest disposable vapes and in line with their mission statement, it does indeed look fashionable. Each one comes filled with 17ml of ejuice and a rechargeable 650mAh battery which charges with Type-C charging. Each Biffbar 6000 is good for up to 6000 puffs and they are available in fifteen flavors.

Biffbar isn’t lying when they say that they’re trying to make their products fashionable. The Biffbar 6000 is a great looking disposable and it has more style than most disposables that you’ll see. But before I get into the design, let’s talk about the size.

What’s great about the small size is that I can carry a few of these around with me at once and not feel bulked up or weighed down. They’re perfectly pocket-sized and very, very light too.

There are some cons to this clear shell though, one of them being durability. This transparent top layer gets scratched quite easily and it shows quickly. And because the front and back of each device is flat and then curves out, a wear line becomes visible right where the curve starts. 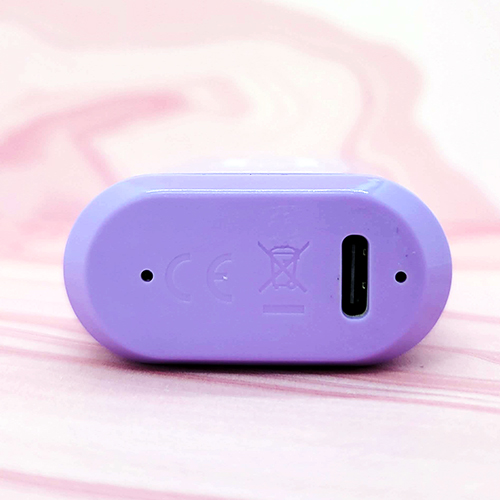 The transparent shell extends up and around the mouthpiece, which is small and nicely slanted. On the bottom of each one there are the airflow holes, an LED light, and a Type-C recharging port.

You have to remove a sticker from the bottom of each one before using it and on most of my devices, it left behind a sticky residue. This doesn’t interfere with the functioning of the device but it does end up picking up dirt and such. A little bit of elbow grease will get the residue off but I think Biffbar needs to tone down the strength of the stickers that they use; they don’t need to be industrial strength! 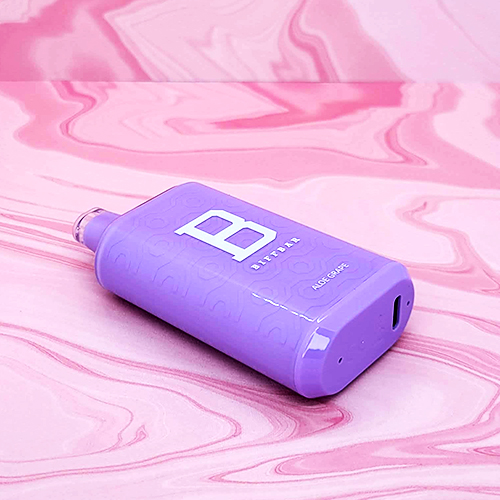 The Biffbar 6000 is small but it comes with a lot of ejuice and a large battery. From the 17ml of ejuice and 650mAh built-in rechargeable battery inside, you can expect 6000 puffs from each one. That’s a lot of puffs from a single device, especially one that is this easy to carry.

These are draw activated disposables and they don’t have any buttons at all on them. That’s the beauty of disposable vapes; they make it as easy as possible to vape. Once you take the Biffbar 6000 out of the packaging you only need to remove the sticker from the bottom of the device and inhale on the mouthpiece to start vaping.

If you’re not an experienced vaper, you might not know what a mouth to lung or direct lung draw is. In that case, I would suggest that you check out our guide to the difference between MTL and DL vaping. These disposables offer a mouth to lung draw, which is a pull that is similar to a cigarette. You don’t have to make yourself lightheaded to pull on them either because they aren’t that tight, but it’s a draw that will remind you of smoking without all of the other nastiness that comes from puffing on an actual cigarette.

A single charge will get you somewhere in the realm of 300-400 puffs, so that could be anywhere from a day or two to a week of vaping depending on your habits. Doing some quick math, this means that you can recharge each device 15+ times before it runs out. 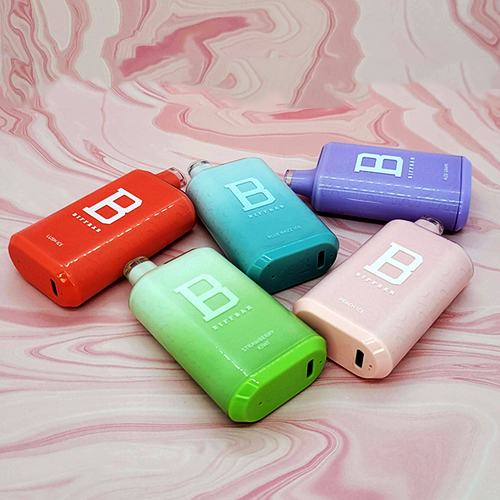 There are a variety of flavors that you can get the Biffbar 6000 in. There are fifteen in total at the time of writing this review and some of these flavor options are decidedly unique. The 15 flavors that they offer are:

I was a bit let down when I received the package though because I did not receive any of the more interesting sounding flavors to try (I got none of the last five flavors on the list above). Those last five are the ones that I was most looking forward to trying out, but maybe in a part two review? We’ll see!

For this review I have Sour Apple, Strawberry Kiwi, Aloe Grape, Peach Ice, and Strawberry Grape that I’ve been using. I’m going to describe how these flavors taste to me and what I think of them. However, keep in mind that just because I like a flavor that does not mean that you will like it. Similarly, if I don’t like a flavor this does not mean that you will not like it. This is solely my subjective opinion.

Apple is a flavor that is all too often forgotten for disposable flavors and I don’t see why — apples are great! This one is appropriately named “sour” apple and you understand why right away when you vape it. The sour taste is strong but I like it, and the apple flavor is that of granny smith apples. Yum!

Strawberry and kiwi is a classic mix and Biffbar have done it well. The fruit flavors mix and mash together and end up giving off a really good vape. It’s sweet but not too much and I think that it has a natural tasting flavor. I can vape on this flavor all day without getting sick of it so that should tell you something about how good it is.

There’s a perfumey taste to Biffbar’s version of aloe grape that I’m not sure if I like. It’s good for a few puffs here and there, but I can’t vape on it consistently without getting a headache. The aloe flavor is also pretty strong, stronger than it should be, with concord grapes nearing the end of the inhale and more there on the exhale.

Strawberry is the majority of the flavor with grape being secondary. But I think that it works well with this flavor and I wouldn’t want the grape flavor to be any stronger. It’s 70% strawberry and 30% grape and as someone who likes strawberry vapes, it’s perfect for me. The grape flavor spices things up a bit on the exhale for a nice twist to what is essentially a strawberry disposable flavor.

A lot of peach and some ice is how I can describe this flavor. The peach flavor is light and sweet and the cooling is there just enough to feel. I think that this is the least unique flavor out of all of the ones that I tried but that doesn’t make it any less tasty. If you like flavors that are tried and true and you like peach flavors, this is one to get. 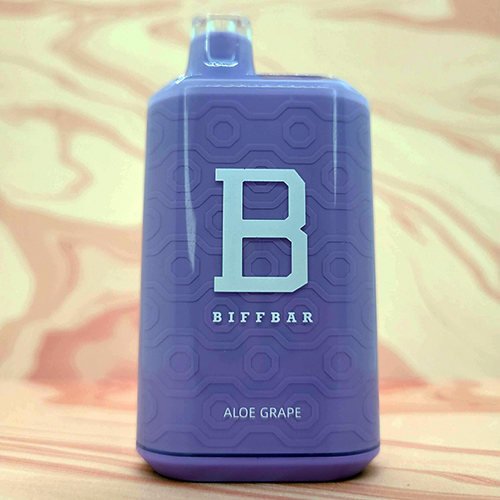 My overall experience with Biffbar’s 6000 disposables has been positive. The flavors that I’ve been using are all very much to my taste and to my liking, so vaping on them as much as I have has felt more like pleasure than work.

You can get these disposable in either 0mg or 50mg strength and I’ve been using the 50mg (5%) version for my review. What I noticed is that they don’t have as strong of a draw as you would expect from a 50mg disposable, instead feeling more like a 30mg or 35mg draw. I still feel like I get the same amount of nicotine as I would from other 5% disposables but the draw is dangerously smooth. You have to be careful not to overdo it or you can end up feeling lightheaded quickly.

This smooth draw can be a good thing or a bad thing depending on what you want out of your vape. If you’re just in it for the nicotine satisfaction then the smooth vapor might be something that you like. If you’re after the throat hit though, I’m not sure that these will give you enough of a hit for you to be satisfied with them.

Generally, these have been trouble-free to use but I did have a bit of an issue with one of my Sour Apple devices. After finishing my draw, it would continue to draw for a second before shutting off.

All of the rest of my Biffbar 6000’s stopped firing immediately when I stopped inhaling, so this was weird and honestly a little scary. But that same oddly functioning disposable is still working as I write this review and it has not gone any further than continuing to fire for a second after I stop drawing.

It seems like it’s just a delayed stop to the firing mechanism and it hasn’t caused any major issues for me thus far so I won’t be too harsh. But in order to be as completely transparent and honest with this review as I can be, I had to mention it.

Biffbar 6000 disposables manage to cram a lot of goodness into a small, stylish shell. However, it’s a shell that quickly shows signs of wear, even if you’re careful with it. I do like the design though and the small size makes it easy to carry around two or three of these at once. That’s great if you aren’t happy with vaping on the same flavor day in and day out.

The draw is really smooth for a 50mg disposable so that’s a key point to keep in mind when deciding on if you should purchase these or not. They aren’t going to provide a strong throat hit, but the vapor goes down easily and they still provide the satisfaction that you would expect from a 5% disposable.

It sucks that I didn’t get to try out any of their most unique flavors but the ones that I did try were a pleasure to vape. For a disposable vape that does the job and which looks good doing it, you really can’t go wrong with the Biffbar 6000.