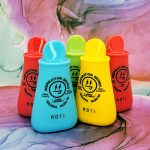 I don’t know what MOTI was thinking with the design of these disposables but it severely detracts from my overall rating of this device. I can’t in any way endorse the toy-like design because it will no doubt be subject to outcry from anti-vaping groups everywhere. I know that they were trying to go for a lab beaker/coffee beaker design, but when this shape is paired with vibrant colors and a smiley face, it really gives the wrong impression.

If we forget the design though, the rest of the Beaker 5000 is great. I’m a fan of the ‘light’ tasting flavors and the draw is very satisfying. Each one will get you up to 5000 puffs from the 12ml of ejuice and rechargeable battery so you can get at least a week of vaping out of each one; and that’s if you’re a heavy vaper.

While I can’t recommend the Beaker due to the design, the performance is far from questionable. It’s without a doubt a good disposable so all I can hope is that they transplant the innards into a new design.

The MOTI Beaker 5000 is a brand-new disposable vape and the design is sure to cause some controversy. It has a strange shape and an odd smiley face on it that just screams for the FDAs attention; it almost looks like a toy and that’s not doing the vaping industry any favors.

Questionable design aside, the MOTI Beaker 5000 is a rechargeable disposable with a 650mAh battery. It comes filled with 12ml of ejuice for up to 5000 puffs, firmly placing it in the category of “high-puff-count” disposables. It uses a 1.1Ω mesh coil and pure organic cotton on the inside and fires at a wattage of 11.7W.

We’ve reviewed a few of MOTI’s products here on Versed Vaper, including the MOTI X Pod Mod, MOTI Play Pod Kit, and MOTI X MINI. This is the first disposable from MOTI that I’m trying and quite honestly, the design has left a bad impression on me from the start.

I’m going to do my best to be as objective as possible with the MOTI Beaker 5000 so that you can decide if the performance is worth the purchase.

These disposables were sent to me directly by MOTI for the purpose of this review.

I’m going to start this off by saying that I don’t think that the Beaker 5000 looks bad, because it doesn’t. The shape is odd for sure and it’s also bulky, but it’s not an ugly device.

But with that being said, I don’t know what MOTI was thinking with this one. The Beaker is just asking for the attention of the FDA because it looks like a toy. The colors are so vibrant and it even has a smiley face of sorts on it; this is the definition of a device that would appeal to kids.

To be completely fair, MOTI’s website says that the design is “beaker-shaped” in reference to a beaker that you would find in a lab, or a beaker of coffee. But this is a good example of a situation where what a product is intended to look like is not always what it ends up being perceived as.

Kid-appeal aside, it’s a “fun” looking device (and I guess that’s part of the problem). All of the colors are vibrant and stand out, and the plastic shell (while not quite soft-touch) feels really nice. These all have a flat finish on the body and a shiny plastic mouthpiece which is a cool contrast.

These are without a doubt some of the largest and most bulky disposables that I’ve used. Each one is a whopping 89mm tall, 47mm wide at the base, and 29mm thick. Since they have a beaker shape they get wider towards the bottom of the device, which is an odd design. I’ve used disposables that come with more ejuice and which have larger batteries and they’ve been much smaller than this. Needless to say, portability is not a strong-point of the Beaker 5000.

The shape does feel nice in the hand though. It’s a really comfortable shape to hold so I can see the benefit in the weird design. I like that you don’t have to scrunch your hand around it to hold it properly.

The front of each one is decorated with a bunch of writing, all printed around a central smiley-face-like icon. On a positive note, the puff count, amount of eliquid, and flavor are all printed on the device so you don’t have to wonder about any of that while you’re using it.

Located on the bottom of the device is a white LED indicator, some airflow intake holes, and the Type-C charging port. Standard stuff. The LED is a little bright in a dark room and unfortunately, you can’t cover it as you will be covering the airflow intake as well.

The mouthpiece is comfortable as it’s very thin and wide. Now, I don’t know if I’m being too critical here, but it reminds me of a pacifier. It could just be that I have this “kid-friendly-design” on the brain, but I don’t think it’s crazy to say that that is what it looks like.

I’m not sure how to rate the design of the MOTI Beaker 5000. It’s definitely going to lose points for the toy-like appearance, but there are some things that I like about it too like how comfortable it is to hold and the two-tone shiny and flat plastic finishes. It’s a tough decision, but I think that a middle of the road score is appropriate. 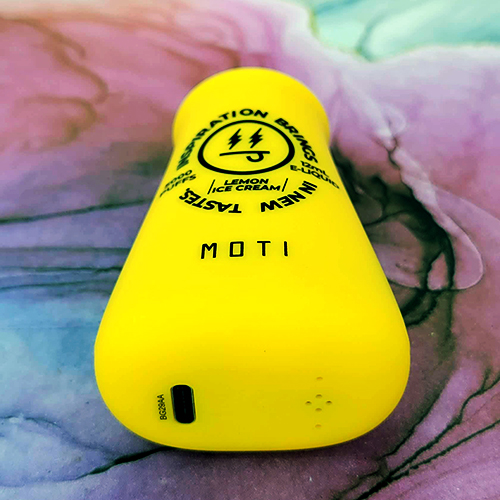 The MOTI Beaker 5000 is a high-puff-count disposable that offers 5000 puffs per device. It comes with 12ml of ejuice and has a 650mAh battery that can be charged with Type-C charging. It’s a draw-activated device, like most disposables, so inhaling on the mouthpiece is all that you need to do in order to start using it.

The Beaker 5000 has a 1.1Ω mesh coil inside that does the heavy lifting of vaporizing the ejuice. It also uses pure organic cotton for the wicking material.

MOTI’s website says that the Beaker 5000 fires at 11.7W, but this is only when it’s fully charged. While using these I could feel the draw getting weaker as the battery died so it’s certainly not a constant wattage output. 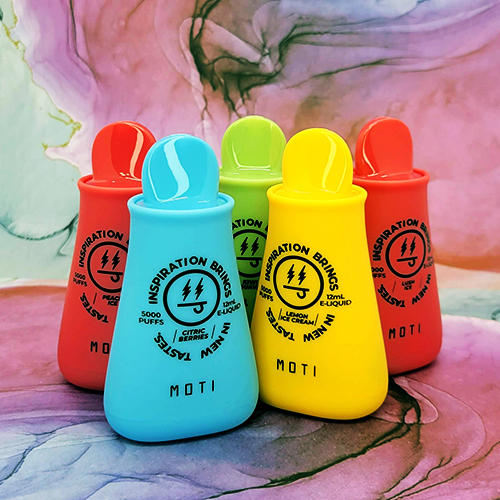 The Beaker 5000 comes in ten different flavors. If you take a look at the list you’ll see that they are all some variation of fruits except for two which are Cola Fizz and Spearmint. Having a majority of your flavors being fruit related is typical for a disposable brand and ten flavors is also a standard number of flavors to offer. The flavor options are:

You’ll notice that there’s a mix of ice and non-ice flavors in there, but the “ice” designation here is deceiving. All of the flavors have some level of cooling to them, even if only a little bit.

The name gives it away but this is a cola drink flavor with some cooling added. The cola flavor is bold and strong and there’s that “fizzy” taste/sensation that I really like from soda flavors. This is easily one of my favorite flavors because it isn’t too sweet but still really flavorful. While I’m not a huge soda drinker myself, I like the flavor and it’s even better because I don’t have to drink a glass of sugary cola!

This is a nice light mix of raspberries and lemon that I can get behind. It’s basically a raspberry lemonade flavor with a dose of cooling in there. It’s not a lot of cooling though so non-menthol vapers might still like this flavor. Like Cola Fizz, it’s mildly sweet but still tastes good.

I can’t say that I’ve tried very many kiwi and guava flavors before so this is new to me but it has a nice taste. I noticed that these MOTI flavors are not too strong and all of them go for a lighter taste that isn’t too sweet or sugary. That’s the case with kiwi guava. Both flavors mix together for the inhale and exhale to create a pleasant tropical flavor. The guava is a tad bit more prominent than the kiwi. Like the other flavors, there’s cooling here too and it’s one of the strongest of the flavors I tried. It’s not “punch you in the face” cooling but it’s strong.

I love this flavor. I find that a lot of ice cream flavored vapes tend to taste somewhere near vomit because they overdo the “ice cream” portion, but thankfully that’s not the case here. It definitely tastes like lemon ice cream but I’m also tasting a sort of lemon dessert. It reminds me of lemon tart flavored ejuices (one in particular) and it’s just a really tasty vape. If you like lemon then do yourself a favor and try this flavor out.

There’s nothing special about this peach flavor but it does taste good. It’s a typical sweet peach vape with some cooling added in. I don’t find it to be different from the hundreds of other peach ice disposables that are out there, so it’s not winning any praise for originality, but it’s a tasty flavor. 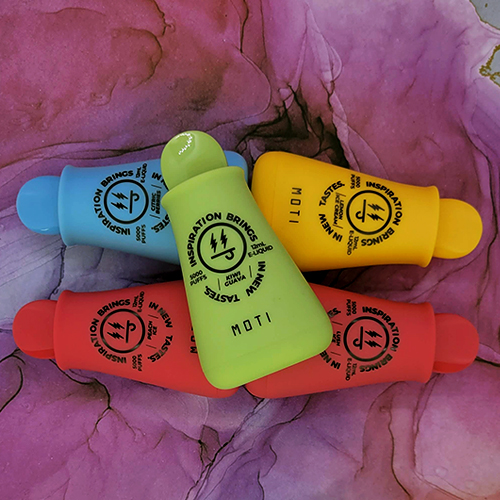 As I mentioned earlier in this review, you can tell when they start to die that the draw is getting weaker. They start off hitting very strong and this slowly gets weaker and weaker until they die. Because of this noticeable drop in performance, I never let these die and charged them when I noticed the draw getting too weak. You might want to do the same.

Even after thousands of puffs and multiple recharges, the flavor is still just as good as when I first opened them. I think it’s safe to say that the flavor will remain good for the entire time that the ejuice lasts, which is going to be at least a week even if you’re vaping very heavily.

I don’t know what MOTI was thinking with the design of these disposables but it severely detracts from my overall rating of this device. I can’t in any way endorse the toy-like design because it will no doubt be subject to outcry from anti-vaping groups everywhere. I know that they were trying to go for a lab beaker/coffee beaker design, but when this shape is paired with vibrant colors and a smiley face, it really gives the wrong impression.

If we forget the design though, the rest of the Beaker 5000 is great. I’m a fan of the ‘light’ tasting flavors and the draw is very satisfying. Each one will get you up to 5000 puffs from the 12ml of ejuice and rechargeable battery so you can get at least a week of vaping out of each one; and that’s if you’re a heavy vaper.

While I can’t recommend the Beaker due to the design, the performance is far from questionable. It’s without a doubt a good disposable so all I can hope is that they transplant the innards into a new design.