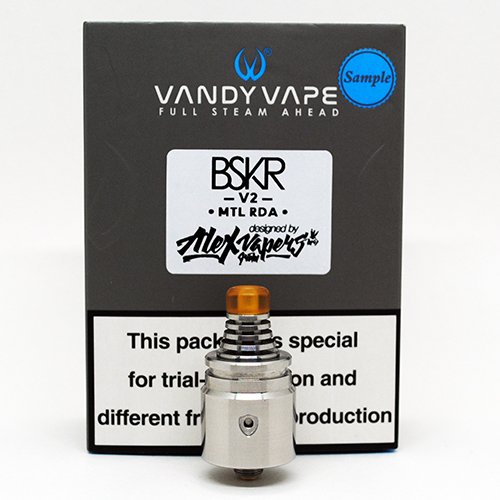 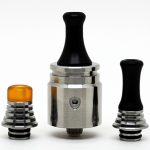 Vandy Vape have teamed up with Alex from VapersMD to create the BSKR V2 MTL RDA. It has a unique airflow design and brings a MTL draw with lots of flavor.

The BSKR V2 is a single coil RDA with a 22mm base diameter. It comes with four inserts that allow you to change the airflow from a MTL draw to a super tight MTL vape. It’s got an easy to use build-deck and a deep 1.5ml juice well. It also comes with a squonk pin and works wonderfully with squonk mods.

Is the BSKR V2 the RDA to buy for MTL vaping and squonking? 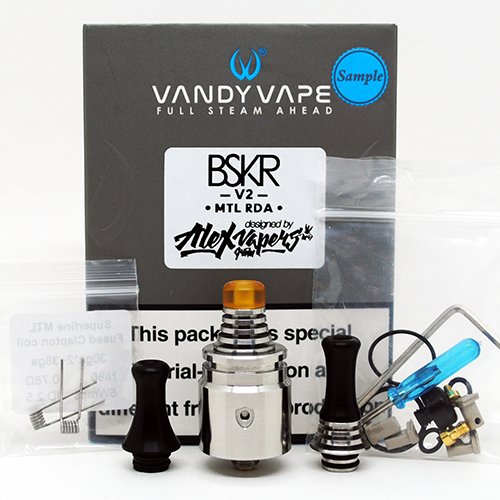 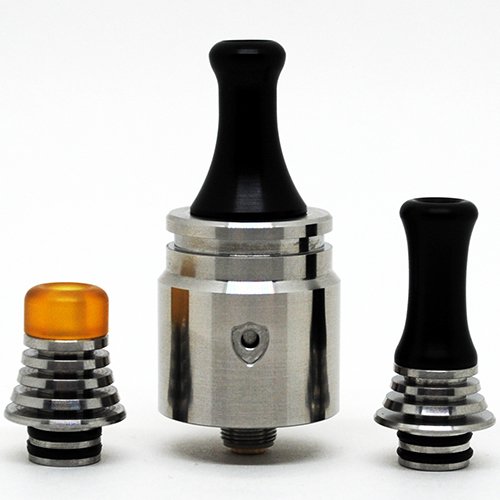 The BSKR V2 is like the Wotofo STNG MTL RDA in that it has no top cap; it’s got a one piece mid-cap with a removable drip tip. In order to access the build deck you have to remove the entire midcap and drip tip assembly. I wish I had known that before I nearly broke my fingers trying to remove what looks like a top cap. Well, at least now you know!

The design isn’t the most attractive but that’s just my opinion. It looks too simple and plain. It tapers near the top with a band cut right below the drip tip that looks like a top cap. It’s not, so don’t try to remove it. The machining is clean and done well.

This is a 22mm base diameter RDA and it’s 24mm tall, not including the drip tip. It ships with a short drip tip with heat sink fins and an ULTEM tip but Vandy Vape also include two other drip tips in the box. One is black and tall with less heat sink fins than the pre-installed drip tip. The other looks the most ‘normal’ and is wide and tall with no heat sink fins. All three are 510 sized so they can be swapped out for another 510. As far as I can tell, they all have the same bore size too so the draw won’t be much different. They are different heights though.

On the side of the body is a single airflow hole. It sits slightly recessed in a cutout that looks somewhat like a badge. When I first saw this I wasn’t sure if I had lost a piece because it looks like something should be where that badge cutout is. It turns out that that’s just how it is.

The body of the BSKR V2 locks onto the deck and doesn’t turn, so how do you adjust the airflow? It’s a strange idea but it works well: airflow inserts.

But that’s not all. There are four airflow inserts included with the BSKR V2 that can be inserted into the side of the build deck. They each have a different hole size: 1mm, 1.4mm, 1.6mm & 2.0mm. Once installed, the airflow hole on the inside of the cap will feed into the insert and direct airflow straight under the coil. It’s an innovative airflow design that really works to enhance the flavor of this tank.

The drawback to these inserts is that it’s not easy to change your airflow on the go. If you’re out and about you’ll have to carry the inserts with you and it’s easy for them to get lost. They also get juiced up from sitting under the coil so it gets messy to change without a napkin or paper towel handy. It’s not exactly a convenient design.

However, once I found the airflow insert that I liked using, I didn’t change it. I was happy with the draw and didn’t find a reason to switch it up. Hopefully this is the case for a lot of you MTL vapers out there.

Using the 1.0mm airflow insert provides the tightest draw for this tank which is a super restricted MTL. The 2.0mm airflow insert is the loosest draw and delivers a more open MTL draw; it’s not a loose MTL though. The 1.4mm and 1.6mm inserts are somewhere in between. I liked the 1.4mm insert the most.

There’s no turbulence and the airflow is smooth but it is loud, just short of whistling. I can hear the airflow rushing into the tank whenever I take a draw. 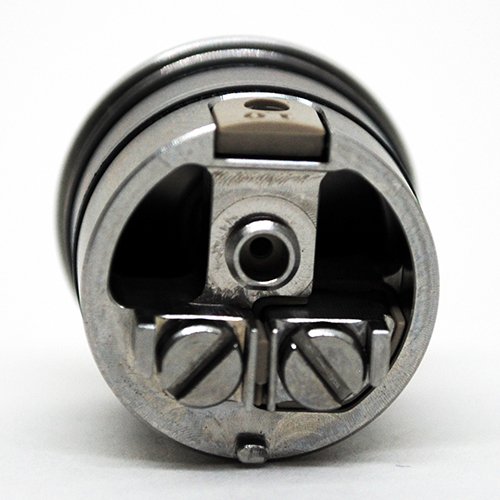 The build deck on the BSKR is tiny but it is a 22mm diameter, single coil RDA after all. It’s easy to build on with the 2.5mm ID coils that Vandy Vape include in the box and could maybe fit 3mm ID. I wouldn’t try anything larger.

On the outer edge of the deck is where you place the airflow insert. It slides into the deck and sits tightly in its spot. You can see the airflow hole in the insert and how it directs air underneath the coil. Vandy Vape and Alex did excellent work with the airflow design.

The juice well on the BSKR V2 is deep — much deeper than I was expecting. It will hold 1.5ml of ejuice and the design of the deck ensures that it won’t leak from the airflow holes. But with a juice well this deep you have to be careful not to tip the tank over. If you do, you will have leaking.

How to Build on the BSKR V2

The BSKR V2 is incredibly easy to build on. Vandy Vape even include coils to make the process even easier.

Loosen the flathead screws on the build deck. Right now is also a good time to insert one of the airflow plugs. My suggestion is to start with the 2.0mm and work your way down to the restriction that you prefer.

Spacing out the included coil is also a good idea. This will ensure that the legs fit around the outside of the screws. Spacing will make the coil glow evenly, too. Use a coiling rod or, if you don’t have a coiling rod, a thin screwdriver to space out your coil wraps.

Insert the coil legs into the outside of the flathead screws and try to keep the coil centered over the airflow hole in the center of the deck. If it’s not perfect, don’t fret. You can tighten down the screws and move the coil around after.

You don’t want your coil touching the deck or it could cause a short. Make sure that the coil is lifted off the deck just enough to prevent it from touching.

Time for the dry burn! Set your mod to a very low wattage like 10-15W and pulse the wattage. The goal is for the coil to be glowing evenly. If you spaced your coil then it should do so right away but if not, take a pair of ceramic tweezers and gently squeeze the coil together. Strumming the coil with your tweezers will also work.

Wicking is next. Thread a piece of cotton through the coil (once it has cooled down, of course!). Because of the depth of the juice well, the best place to cut the cotton is right at the bottom o-ring on the deck. With your cotton cut, fluff it out by running your tweezers through it.

The wick holes on the BSKR V2 are big so it’s easy to get the cotton into the deck. Grab the end of the cotton with tweezers and stuff it into the wicking holes. Make sure it goes all the way down.

Juice up the cotton with your favorite ejuice to get it saturated. Wait a few minutes and it should be ready to vape on. 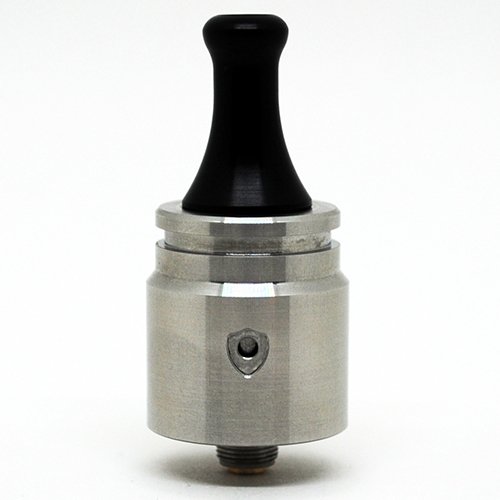 The coil that Vandy Vape included came out to 0.68ohm and it’s what I used to test the BSKR V2. The 1.4mm airflow insert is my favorite because it’s a MTL draw with just the amount of restriction that I like. The airflow inserts are nicely done and I think that they picked the right sizes. There’s an airflow insert for every type of MTL vaper.

Flavor from this tank is excellent. The way the airflow travels through the cap and hits the bottom of the coil leads to really tasty draws. The vapor is too hot at 30 watts but vaping in the 22-27W range is perfect. 25W is the perfect mix of warmth, flavor and vapor.

Removing the drip tip or top cap to drip is a pain so I did away with that idea quickly. It can be used as a dripper but it’s more pain that it’s worth. Squonking is fortunately solid with the BSKR V2 because it distributes the ejuice into the deep well and leaves any excess there to be absorbed later.

Overall, I’m happy with how this tank performs. Vandy Vape and Alex have made the BSKR V2 an RDA that is easy to build on and that MTL vapers will be satisfied to use. The airflow system works like a charm but the next version should work more quietly; it’s noticeably loud. More importantly, the airflow inserts aren’t convenient to carry around, so it’s not practical to change your airflow on the go.

Aside from these negative points, it’s a solid tank. The flavor it delivers is above-average and it squonks well without leaking. The BSKR V2 is a MTL RDA worth picking up.