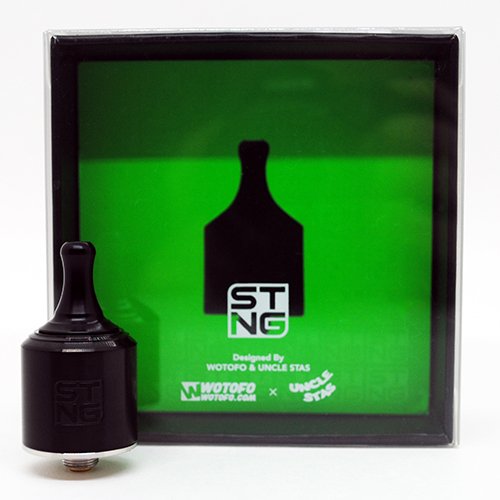 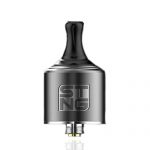 The STNG is a new RDA from Wotofo. It’s made in collaboration with Uncle Stas who I’ve never heard of before but it looks like he runs a Russian YouTube channel called Vapor Place.

The STNG is a small 22mm diameter RDA made for mouth to lung vaping. It comes with a coil for regular nicotine eliquids and a coil for nicotine salts. It’s a single coil RDA with a clamp style build deck and it has got a single airflow hole on the side of the tank. It also comes with two tall drip tips and it’s squonk compatible.

There haven’t been many great MTL RDAs this year but is the STNG different? Read on to find out. 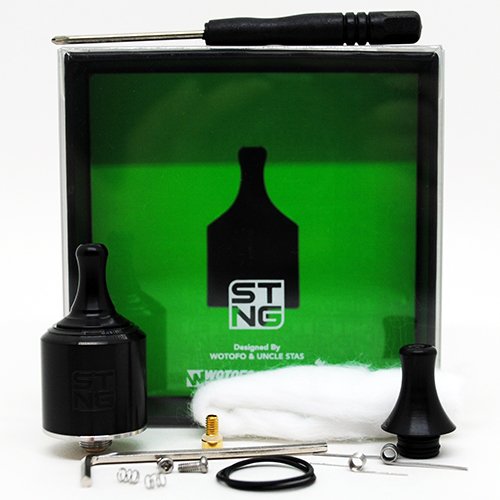 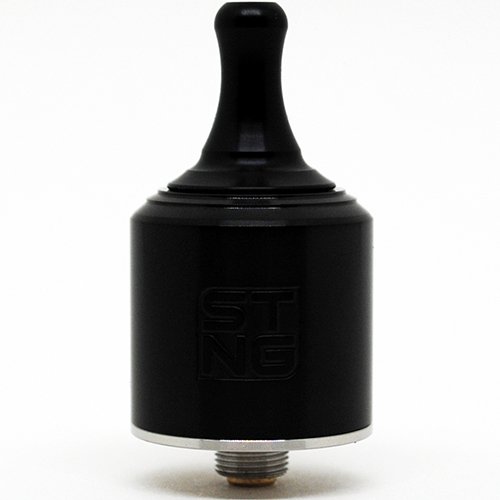 The STNG is a small RDA with a simple design. It’s 22mm in diameter so it’ll fit on 90% of mods without overhang. As for looks, the STNG doesn’t have a lot going on. That’s not to say that it’s an ugly RDA but it’s got a simple appearance. STNG is engraved into the top cap in the same color as the body. I think that the STNG could do with some more styling and design features but it is what it is.

Build quality is solid. The STNG is machined properly and the paint quality is on point. The engraving is nicely done and basically perfect. Wotofo have never had a problem with their build quality and that hasn’t changed with this tank.

Two drip tips come in the box. They’re tall and made of delrin with a 510 compatible size. They both have a 3mm bore diameter so the draw will be the same from either one. However, they each have a different outer diameter so the one you’ll want to use will come down to personal preference. 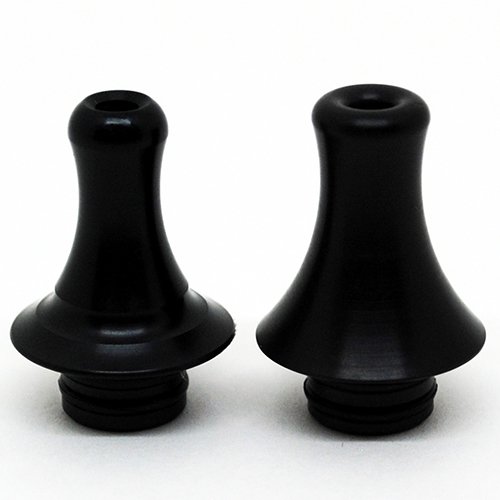 Dripping with this tank is more difficult than with other RDAs for one simple reason: it’s impossible to drip into the 3mm diameter drip tip. You have to remove it to drip which really isn’t that bad, but it’s more work. For this reason, the STNG is better used as a squonking RDA than as a dripper.

There’s a single airflow hole on one side of the STNG. This airflow hole can be adjusted by turning the top cap which is on a stopper. The top cap is smooth and easy to turn. The cutout to adjust the airflow is a “droplet shaped air control design” as Wotofo calls it. It’s basically shaped like a sideways teardrop that cuts down the airflow.

The STNG is marketed as a MTL RDA so not surprisingly, a MTL draw is what it delivers. Leaving the airflow wide open gives a loose MTL draw, but it’s definitely still mouth to lung. For someone who doesn’t like tight MTL vapes, the open airflow will be perfect.

Closing the airflow down makes the draw increasingly tighter. Half-way closed is a restricted MTL draw that isn’t too tight. But with the airflow just barely open it’s a very restricted, tight mouth to lung that I absolutely love. Fans of very restricted draws will love this for sure.

The airflow is also silky smooth with no turbulence or whistling to speak of. It makes a little bit of noise but it’s still not loud. 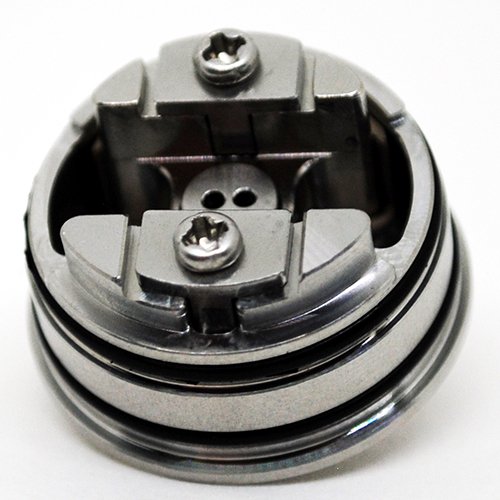 The build deck on the STNG is like its design; simple yet practical. It’s a single coil, dual post build deck that uses clamps to secure the coil. There’s one clamp on each side of the deck so in order to be installed, the coil has to have its legs facing opposite directions.

The deck uses two Phillips Head screws that are easy to work with and also good quality. The screws tighten the clamps well and hold the coil firmly in place.

In the middle of the deck are two holes that funnel air from the single airflow hole on the side of the tank. When you inhale, air hits the coil from underneath. This design is great because no matter how much you restrict the airflow hole, the coil will still get air. This definitely benefits the flavor production of this tank and ensures that the vapor doesn’t get too hot either. 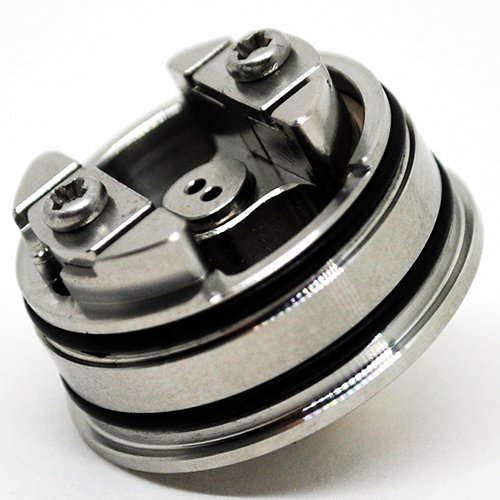 This isn’t a large build deck but there’s enough room for builds up to 3mm ID. The STNG comes with two coils that are sized perfectly: a Ni80 dual core fused clapton coil with 6 wraps and a Ni80 simple round wire coil with 9 wraps.

The dual core fused clapton came out to 0.65ohms for me and is supposed to be used for ‘regular’ nicotine ejuices. The round wire coil came out to 1.1ohms and is meant for nicotine salts.

There’s room to place your wicks on the side of the build deck but it’s not very deep. Wicking isn’t an issue with this RDA but the STNG has a shallow juice well. In combination with the drip tip, this is another reason to squonk with the STNG over dripping.

Building on the STNG RDA 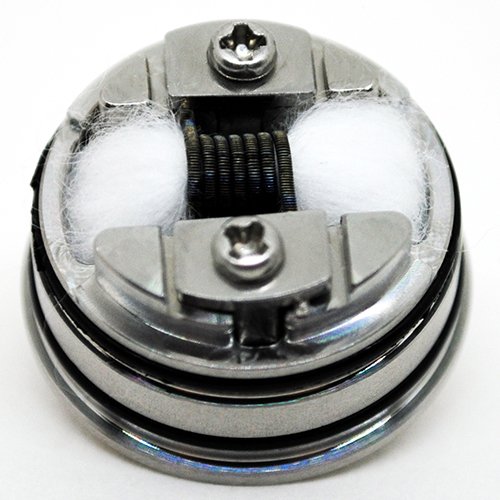 This is a great RDA for beginners. This deck is so easy to build on that even a complete newbie to rebuildables will be able to manage. Wotofo also include everything needed to build like the coils and cotton so it’s a prime choice for a beginner RDA.

Start by loosening the screws on the clamps. You don’t need to loosen them too much, just enough to be able to fit your coil legs under the clamps.

Position the coil so that it’s directly above the holes in the center of the build deck. This will ensure optimal flavor and performance. With the coil in position, secure the clamps down.

Trim off the excess legs from the coil. At this point, it’s a good idea to dry burn the coil at very low wattage to make sure that it glows evenly. Don’t go higher than 10-15W or you’ll scorch the coil. Just pulse it for a second or so at a time to get the coil glowing evenly.

When the coil is heating properly it’s time to move on to wicking. RDAs are generally easy to wick and the STNG is no exception. I used around a third of the cotton strip that Wotofo included and it was the perfect amount of cotton.

Thread the cotton through the coil and trim the cotton to the edge of the build deck. Tuck the cotton into the wicking holes on the sides of the deck and it’s time to prime. Coat the cotton with a generous amount of ejuice to get it saturated and wait a minute or two before vaping. Finito! 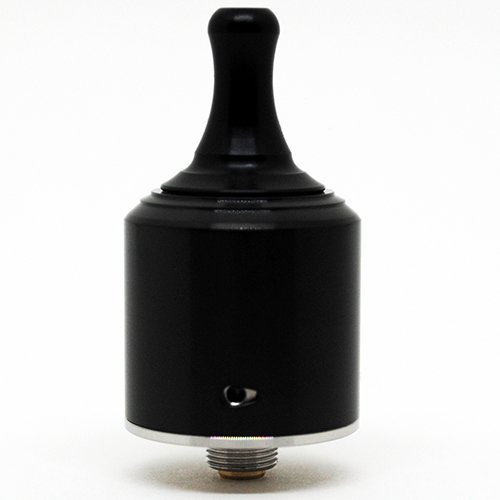 It’s hard to find a good MTL tank but the STNG has been good to me in the week that I’ve been using it. I’ve got a lot of good things to say and not much that is bad.

This is for sure in the top 5 MTL tanks ever and definitely the best of this year. Flavor is solid and accurate. The airflow leading into the deck also gives warm airflow that isn’t too hot, even with the hole close to completely closed.

I used both coils but the dual core fused clapton is the clear winner. The simple round wire coil is decent but it’s nothing compared to the clapton coil. 25-27W is the best for a balanced mix of flavor, warmth, and clouds. This is a really great coil and it makes using this tank even better.

I’ve mentioned this already but the STNG isn’t meant for dripping, at least not to me. Squonking with this tank works so well that I would call it a tank made exclusively for squonking with. Anyone looking for a MTL tank that can squonk well — this should be your pick. It’s a great squonk RDA.

The STNG is a MTL RDA that I really enjoy using. The lack of good MTL tanks had me hoping that this would be good and I wasn’t disappointed. The only real issue with this tank is that it doesn’t work well for dripping but squonking is where it’s really at with the STNG. Highly recommended for MTL vapers seeking a good tank to squonk with.