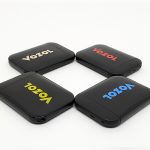 Not too long ago I reviewed Vozol’s D1 disposables and they impressed me. The flavor, draw and throat hit were excellent, especially for a disposable. Today I’m going to be reviewing another disposable that they sell, the Vozol D2, and it looks neat because it has two flavors in one device.

I was sent these devices for review from Vaporl. 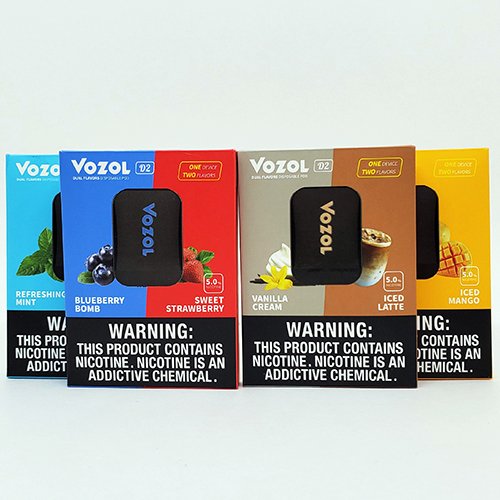 Each Vozol D2 comes in its own box which is two toned depending on the flavor combination. For example, the Cool Melon and Iced Mango D2 is half red and half yellow. Inside the box the D2 is sealed in a plastic package to keep it fresh.

There are silicone plugs in the mouthpiece portions that have to be removed. There’s also a small paper tab that has to be pulled for the device to work.

Much like the Vozol D1 disposables, Vozol’s D2 devices are solid. They’re one-piece, square shaped devices made entirely out of plastic. They aren’t flimsy at all though. I actually tried to take one of them apart and I couldn’t do it; the seam wouldn’t crack open. Seems like they used a good, durable plastic so I’m sure that these things can take a beating.

There’s a hole on each top corner of the D2. One side is one flavor, the other is another. Just draw on the hole to start vaping. There’s no buttons on the D2; it’s a purely draw-activated disposable.

Each D2 comes pre-filled with 2ml of 50mg nicotine salts and there’s 1ml of each flavor. Just like the D1’s 50mg is the only strength that these come in and even for me, that’s a lot of nicotine. Unless you’re a heavy smoker trying to quit, these are gonna be strong.

The D2’s are made out of shiny plastic for the body but they have a matte plastic bottom. The bottom is removable but there’s no point in taking it off. They’re extremely thin and small which I found perfect for slipping into my pocket.

The flavor combinations are easy to tell apart because each one has a different colored Vozol logo on the front. They also have the flavors printed on the back to indicate which side is which flavor.

The airflow holes are on the bottom of the D2 so you have to be careful not to block them. If you do (like I did) you’ll suck juice into your mouth. Not a pleasant experience. These have got a 370mAh battery built into them which should last for 400-500 puffs according to the description. I got an average of 230 puffs per flavor.

I received two of each flavor and it’s a good thing I did because two of the devices only worked with for one flavor. I got a “Merry Berries” D2 where the Blueberry side didn’t work at all and Refreshing Mint wouldn’t work on one of my “The Classic” D2’s. I’m not sure what the quality control is like but it’s clearly not very good if two of the eight devices didn’t fully work. Thumbs down. 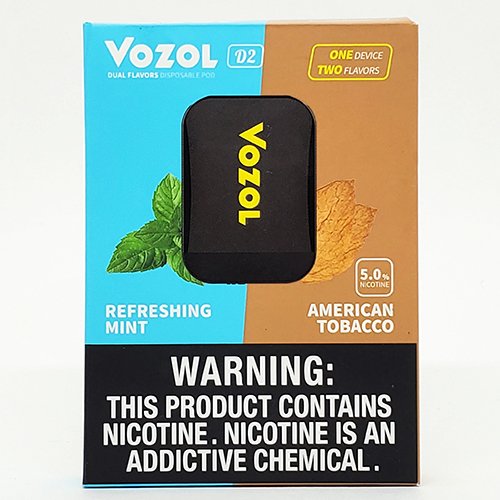 Refreshing Mint: This is a clean tasting mint flavor but it’s so minty that I can feel it in my ears. If you like that sort of thing then power to you. Much too minty for me though. This flavor will wake you up in the morning.

American Tobacco: This one actually tastes like a cigarette. Maybe a bit more like a cigar but it definitely tastes like tobacco. It doesn’t taste artificial like other tobacco flavors and that really sets it apart.

Cool Melon: Watermelon and honeydew are the flavors in this disposable and they go together great. It’s more honeydew than watermelon and I think it tastes great. Like Iced Mango this flavor also has a touch of menthol. Again, I would love this flavor much more without the menthol.

Iced Mango: If you’ve ever had those mango gummy candies that’s exactly what this tastes like. It’s very yummy but there’s a hint of cooling menthol in here. You don’t taste menthol but rather feel the coolness. I would prefer the mango without the menthol but it’s still a tasty vape. 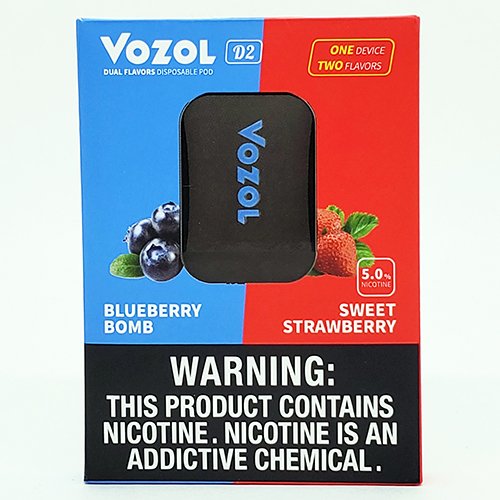 Blueberry Bomb: In the D1 this flavor didn’t taste like blueberries at all but it tastes like they’ve reworked it. It’s not minty anymore and I can definitely taste the blueberries. This went from being the worst flavor to one of the best! Really tasty, natural blueberry flavor.

Sweet Strawberry: This flavor and Blueberry Bomb in one device? This has got to be my favorite D2. Mild strawberry notes that aren’t too sweet are the flavor profile and it’s delicious. It doesn’t taste artificial or overbearing. Yum. 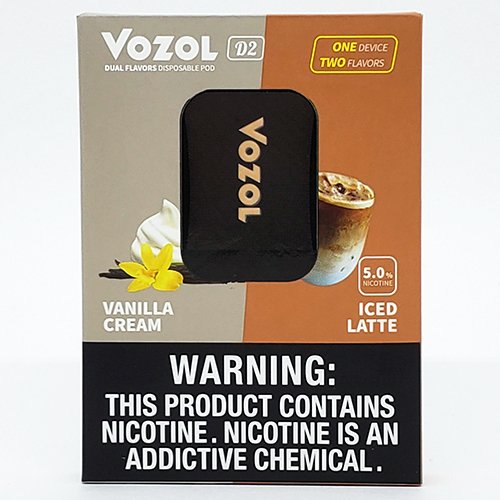 Iced Latte: I’m tasting a cappuccino with this one. Very tasty but it could do without the menthol. I don’t know, maybe it’s because I’m not a menthol fan but I would’ve loved this without it. If you smoked menthols and had a strong coffee in the morning, this is for you.

Vanilla Cream: It’s good but a bit too rich. I can’t vape this for long without starting to feel sick. It’s a tasty vanilla but the cream is too creamy so it’s not a flavor that I can vape all day. 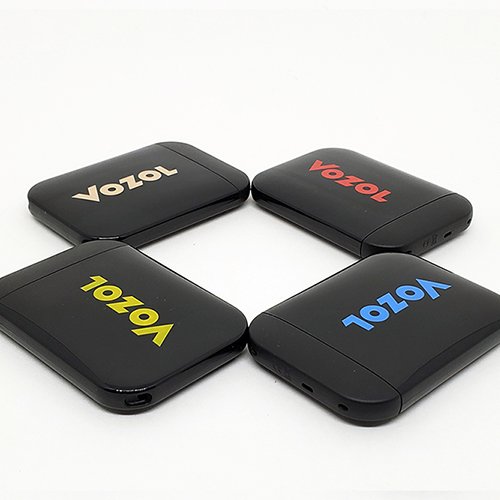 Flavor and vapor are surprisingly good for a disposable device. I think that these are even better than the D1’s and those were impressive to begin with. The throat hit is strong and satisfying enough that heavy smokers should find it appeasing. The vapor is also warm and pleasant with short puffs but taking long draws makes the vapor way too hot. Short puffs are how to use the D2.

The draw is a mouth to lung draw that feels similar to pulling on a cigarette and the draw activation works well. I didn’t have to struggle to get it to activate and even light pulls worked. It’s sensitive but thankfully it never activated on its own.

The flavors are all really good. I had issues with the flavors for the D1’s because they were mostly menthol/mint but the D2 has better flavor variety. Four flavors are the same but the Blueberry Bomb is better with no mint and the three new flavors are good too. I’m sad that there’s no “Green Apple” though! That was my favorite one but it’s sadly missing from the D2’s. Why!

I’m disappointed that two of the devices only worked for a single flavor. They need to be more diligent with their quality control because buying a device that is supposed to work for two flavors and then only getting one that works really defeats the purpose. Not a good look.

Vozol’s D2 disposables are tasty and look good but they need to up their quality control measures. Two of eight devices not working is a 25% failure rate which is way too high for me to be comfortable with. If all of them worked, I would have no problem recommending them as a top-notch disposable.

Have you used the Vozol D2? Leave a comment and let me know your experiences.