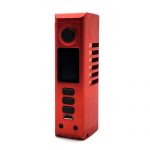 The Dovpo Odin Mini is a collaboration between Dovpo and two of the biggest names in the vaping industry; foul-mouthed YouTuber, Vaping Bogan & popular hardware manufacturer, Vaperz Cloudz.

Vaping Bogan is known for his entertaining, but not-so-family-friendly YouTube vape reviews. He’s no stranger to collaborating on vaping products — the Dovpo Blotto RTA, Blotto Mini RTA, and Bonza V1.5 RDA are just a few of the products that bear his name.

Vaperz Cloudz are a high-end hardware manufacturer that are responsible for a bunch of quality vaping items like the Hammer of God mod, Trilogy RTA, and Asgard RDA.

The Odin Mini is a smaller, single battery version of the Dovpo Odin DNA250C. The Odin Mini takes a single 21700, 20700, or 18650 battery and can fire up to a maximum wattage of 75W. It uses the DNA75C which, just like the DNA250C chip, is known to be efficient, reliable, and extremely customizable through the use of the Escribe suite program.

But the Odin Mini comes at a price. Is it worth the $130+ that it’s selling for? Read on to find out.

This item was sent to me by MyVPro for the purpose of this review. 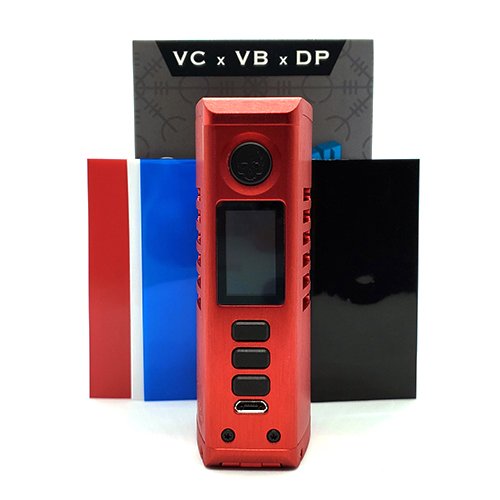 Right off the bat, I have to talk about how gorgeous this mod is. The design is very clean and ultra modern. It just looks so good. All of the edges are rounded off for a more comfortable hand feel and the back of the mod is nicely rounded as well. A neat design element is that there are fins cut out on the sides of the Odin Mini that allow you to see into the battery compartment. This not only looks neat, but in the event of a battery venting it will also help immensely.

Another reason that the Odin Mini looks so good is the paint. All four of the available colors have a brushed metal look that just screams quality.

The Odin Mini is a nice size. It’s about as small as a 21700 compatible mod can be. It feels really good in the hand and it’s quite lightweight as well, though not so light as to feel cheap. The Odin Mini is a good balance between being comfortable to hold and feeling solid.

The top of the Odin Mini is shaped like a trapezoid with rounded corners, as is the 510 plate. The 510 pin is spring-loaded and has a good amount of throw to it. There’s a lot of room on the top of this mod; it can fit up to 30mm atomizers without overhang! Of course, larger atomizers with dual coil builds will require more power than the 75W that the Odin Mini can put out, but it can still fit them!

The battery compartment has an easy to use and secure design. First you slide out the battery door and then it swings open. I’m pretty wary of hinged battery doors as they usually break and give out pretty easily but this isn’t a pure hinge system. I like that the battery door slides into place for a bit more stability and security. So far the battery door has been solid but I’ll update this review if that changes in the coming months.

The battery compartment is snug but not too tight. No matter if it’s a 21700, a 20700, or an 18650 battery with the adapter, there’s no battery rattle. As I mentioned earlier, the fins on the side of the Odin Mini let you see into the battery compartment. These fins also serve as venting slots.

The fire button is round and tactile and it has Vaping Bogan’s skull logo etched into it. The three menu/adjustment buttons are rectangle shaped and similarly clicky and tactile. All of the buttons feel really good, but the fire button does wiggle a bit. Nothing crazy but enough to notice.

Aside from the fire button wiggling a bit, I can’t fault the design or build quality of the Odin Mini. It’s a good looking mod that is exceptionally well built.

If you’ve used a DNA250C mod then the features and functions of the Odin Mini will be familiar. The main difference is that the DNA75C chipset only fires up to 75W, compared to the 200W max on DNA250C mods.

The menu on the Odin Mini is deep with multiple settings that can be changed, along with a ton of modes to choose from. Dovpo have added a custom background of Vaping Bogan’s skull logo onto the Odin Mini, but otherwise the theme is the default DNA75C theme.

You can customize the theme on the Odin Mini by using EVOLV’s Escribe software, which you can download from their website. You can then download a theme from Evolv’s forums and upload it to the Odin Mini. There are hundreds of user-made themes on the forums that will allow you to really make the Odin Mini your own.

In addition to changing the theme, you can further customize almost every aspect of the UI, menu, and modes using Escribe. I would only suggest doing this if you know what you’re doing. But if you do decide to play around and brick your device, Escribe will let you restore it to default settings so there isn’t much to lose by messing around with the software.

The Odin Mini doesn’t turn on or off. Instead, it locks or goes into standby mode. Pressing the fire button five times will lock or unlock the device. If this makes you concerned about the battery draining, don’t be. I’ve left the Odin Mini on all night and the battery didn’t drain a single percent.

Out of the box the Odin Mini has the following modes: Watt Boost, Watts, Replay, TC modes for Kanthal, SS430, SS316, Titanium, and Nickel 200.

Here’s an explanation of the different modes:

Watt Boost: This mode is wattage mode with preheat functionality. This boost allows for faster ramp up times which is awesome to have in power mode. First, set your desired wattage. Then go into the settings menu and into the Atomizer option. Make sure that Boost is set to “On”. Changing the Punch will alter the aggressiveness of the preheat. The Punch can be set from 1-11.

Watts: This is your good old-fashioned wattage mode. You can actually make the default wattage mode use boost if you want to by following the same steps as listed above for Watt Boost mode. However, I prefer to leave the boost off for wattage mode so that I can just switch between the Watt Boost and Watts if I want to turn the boost on or off.

All you have to do is go into Replay mode and select your desired wattage. Then, vape until it gets to a temperature that you like. From here, select save puff. Now the screen will say “Playing” and it will keep your vape at the same temperature that you saved. This takes away having to select the correct material or figuring out what temperature you want to vape at. It’s a simplified and easier to use TC mode that works exceptionally well.

Kanthal, SS430, SS316, Titanium, and Nickel 200: These are your temperature control modes. Select the correct mode for your wire and set your desired wattage and temperature. The chipset will take care of the rest. 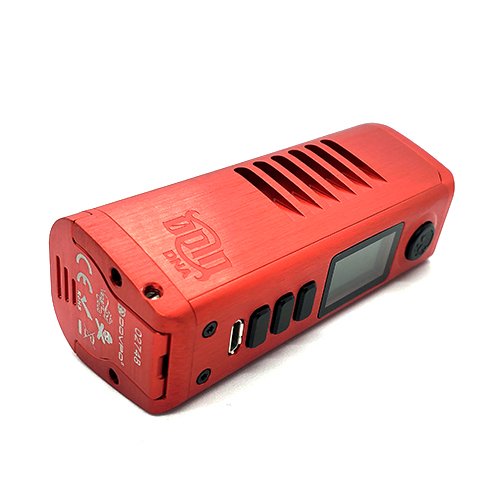 In addition to the modes, the settings menu is rather detailed. Here you’ll find Atomizer, Puff Info, Diagnostics, and System.

Atomizer: This provides info on your coil, like the resistance. You can re-measure the resistance here if you believe that it’s displaying incorrectly. You can also change the wattage and temperature as well as adjust the preheat level and turn it on or off.

Puff Info: This is a log of all of your puffs that you’ve taken. It shows information for each of your puffs with a chart of the wattage, temperature and battery consumption of each puff. Very neat stuff.

Diagnostics: Here you’ll find everything about your build and batteries, even the temperature of the board.

System: In the system menu you can change the brightness of the screen, set the time and date, and change the temperature units from Celsius to Fahrenheit. 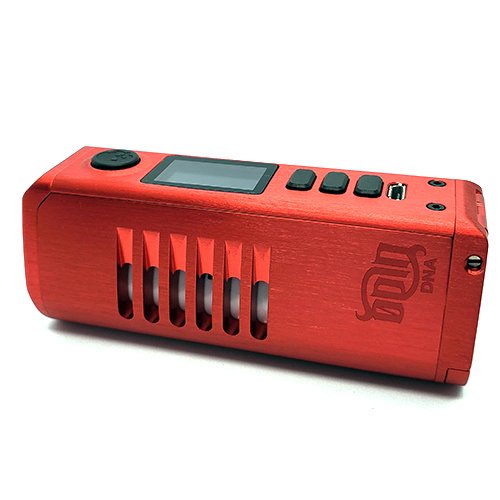 The Odin Mini only fires at up to 75W so it’s not a mod meant for low-ohm dual coil builds. Single coil tanks with mid-resistance builds are really what the Odin Mini is meant for.

Wattage mode vaping is great. The Odin Mini fires instantly and delivers accurate and reliable power. Wattage Boost mode gives noticeably quicker ramp up times which is useful to have. But as good as wattage mode is, I can’t say that it’s really that much different than any other good vape mod.

Where the Odin Mini accels is temperature control mode vaping. I’ve used tons of different mods with all sorts of chips and nothing comes close to TC with a DNA chip. The Odin Mini performs similarly to other DNA mods in that it reaches temperature quickly and accurately, and doesn’t throttle the power too aggressively. It throttles at just the right time to prevent burning and it does this flawlessly.

Another huge plus for the Odin Mini is its compatibility with 21700 batteries. A good 21700 can have a decent amp output and a large capacity which lets you vape for longer than you could with an 18650 battery mod. I definitely enjoyed vaping longer and charging less with the Odin Mini. But if you don’t have a 21700 or 20700, you can still use an 18650 by inserting it into the included adapter. 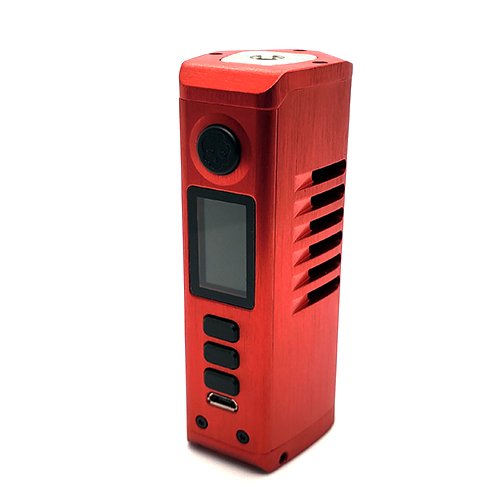 The Odin Mini has really impressed me, so much so that I think it’s one of the best single battery mods of the year. It has stunning good looks, amazing build quality, and last but not least, excellent performance.

Single coil tanks with mid-resistance builds are where the Odin Mini will perform best and it gets even better if you’re using a TC-capable build. And if you’re curious and willing, you can customize the Odin Mini however you like through the Escribe software. You just don’t get customization options like this with non-DNA mods.