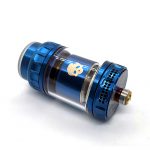 The Blotto Mini RTA is a smaller version of the Blotto RTA. It’s a collaboration between Dovpo and popular Aussie YouTuber, Vaping Bogan. If you haven’t heard of him, Vaping Bogan reviews all sorts of vape gear on his channel and has collaborated on many popular tanks in the past, such as the Vandy Vape Bonza and Bonza V1.5 RDA.

The original Blotto RTA is a great tank, but its large size and 26mm base diameter put some vapers off from getting it. Here’s where the Blotto Mini comes in. It’s a much smaller tank with a 23mm base diameter, but everything else remains exactly the same. It has the same design, the same build deck, and the same 242° airflow setup. 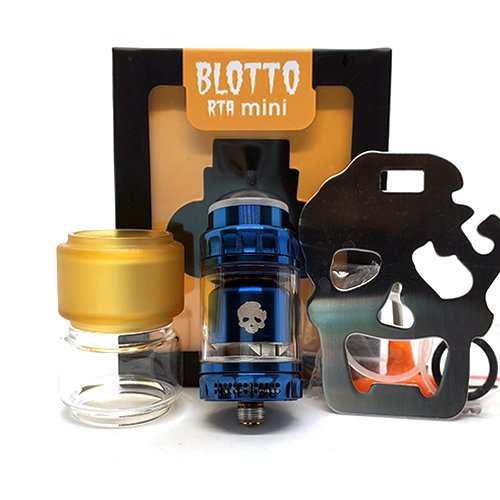 Like the original Blotto, the Blotto Mini has a skull on the chimney inside of the tank. There’s no other visible branding on the tank when it’s attached to a mod. I like this simplicity and the brand free look because it keeps the tank looking clean.

The drip tip for the Blotto Mini is an 810, and it’s the same style as the original; the bottom three-quarters of the drip tip matches the color of the tank, while the top quarter has a semi-transparent frosting.

The first production runs of the original Blotto had issues with the glass being loose when you took the tank apart, but the Blotto Mini doesn’t have this issue. The glass is held in place securely by the o-rings. No trouble here.

The top cap comes off with a quarter turn. It’s a tight fit so it takes a bit of effort to remove; most people will have trouble removing this with one hand. It’s very secure so there’s no chance of it opening in your pocket. The fill ports are the same large, kidney shaped ports as the original Blotto. They’re quite deep and the way they’re shaped ensures that ejuice goes straight down into the tank, instead of collecting on the rim.

The Blotto Mini has the exact same airflow setup as the original Blotto. There are two very wide, honeycomb style airflow holes with 26 holes per side. The airflow control ring is easy to turn but has enough resistance that it will stay wherever it’s set. Because of the small size of the airflow holes it can be difficult to see where the airflow is set to. At least the AFC is on a stopper so you can open it all the way or close it all the way and then adjust it by feel from there.

Just like the design, users of the original Blotto will find this build deck familiar. It’s a postless build deck with four terminals that will work effectively with both single and dual coil builds. But from my personal experience, the Blotto Mini delivers better performance and flavor with a dual coil build.

Blotto describes this deck as providing “242° airflow”. That’s because the deck encircles your coils from 242 degrees, and there are airflow holes everywhere on the deck. There are airflow slots on the base of the deck, and airflow holes all along the walls. When you vape, airflow goes into the honeycomb airflow slots and hits your coils from 242 degrees.

This deck will function best with a single 3mm ID coil, or with two 2.5mm ID coils. Using fancy coils or anything larger than 2.5mm ID will be hard to properly place on the deck. You want your coils to be sitting just under the curved walls in order to get the full effect of the airflow design.

The screws that secure the coils are small flat head screws. They’re really easy to work with and they tighten and untighten with ease. I had no problem with these screws and rather like them on this build deck.

Building on the Blotto Mini RTA 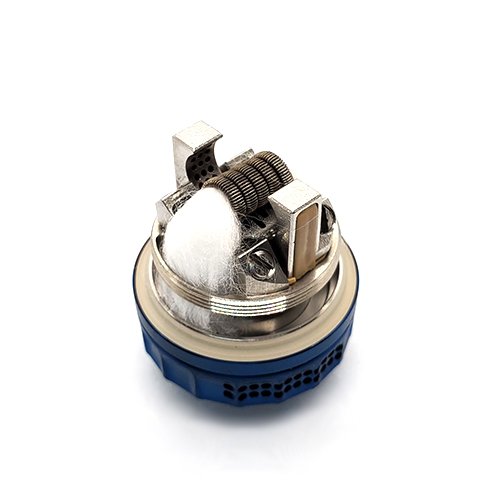 This isn’t the easiest deck to build on for beginners, but it’s still manageable. Advanced users will have no issue building on the Blotto Mini.

As I mentioned in the previous section, you’ll want to use a 3mm ID coil for single coil builds and two 2.5mm ID coils for a dual coil build. Trimming your coil legs down to about 3.5mm is the ideal length. Dovpo includes a skull bottle opener in the packaging that also functions as a coil measuring tool, but the 4mm length still left my coil legs a bit too long.

When installing your coils, you’ll want to position them so that each coil is comfortably under each arch of the build deck. You’ll want to make sure that the coils aren’t touching each other or touching the side walls of the deck. When done correctly, your coils should be nicely under the walls.

With your coils installed and secured by the screws, pulsing them to check for hot spots is a good idea. With your mod set to a low wattage, pulse the coils and check that they glow evenly. If you notice hot spots then use your ceramic tweezers to strum the coils and this should work any hot spots out.

Wicking is simple but there is a trick. Fluffing and combing out your cotton is always a good idea. Once this is done, you’ll want to cut your cotton so that your wicks are just touching the base of the deck when they’re put through the ports. Cutting your cotton a little above the o-rings will be the perfect length.

With your wicking complete, prime your coils with some ejuice and then screw on the glass and tank assembly. Fill up the tank and let it sit. After 5-10 minutes, you’re ready to vape. 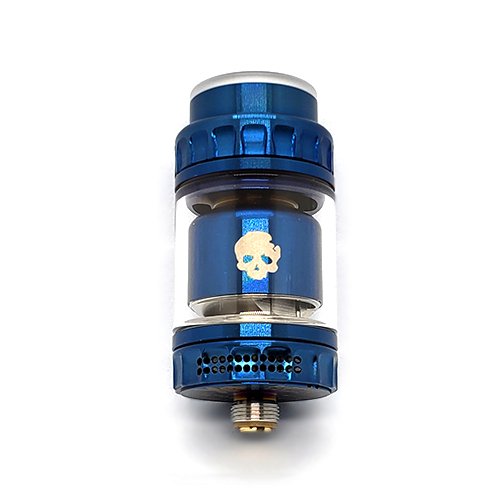 The original Blotto is a very flavorful tank. So much so that it’s one of my favorite RTAs to date. The Blotto Mini delivers flavor that is just as good, possibly even a bit better. This is likely due to the smaller tank size which concentrates the flavor even more than the large space on the Blotto.

For my single coil build I installed the coil right in the middle of the build deck. The build came out to 0.34ohm and I vaped it at 50W. With the airflow open it’s a very airy vape so I closed the airflow down half way for this single coil build. The airflow is smooth and makes very little noise which is surprising for the amount of airflow holes. The flavor is really good, even with just a single coil.

My dual coil build came out to 0.17ohm and I vaped it at 75W. The draw is slightly less airy with the airflow open compared to the single coil build so I closed it down just a quarter of the way for a slightly tighter draw. Not surprisingly, the flavor is even better than the single coil build. Flavor recreation from my ejuices is excellent and I can taste the complex notes and flavors. The small deck size, combined with the 242° airflow heavily concentrates the vapor and flavor.

The Blotto Mini is just as leak resistant as the original. It didn’t leak at all during the time that I used it, and I barely noticed any condensation in the airflow control ring. As long as you build and wick this tank correctly, you won’t have any leaking. If you  do experience leaking, you likely messed up your wicking.

The Blotto Mini is just as good, if not better, than the original Blotto. The smaller tank size makes it look more at home on most mods, but it also concentrates the flavor further.

If you own the original Blotto and you’re happy with the size, the Blotto Mini is only a slight upgrade in flavor and not worth the purchase. However, if you’ve held off on getting the Blotto because it was too big then the Blotto Mini is what you’ve been waiting for.

This isn’t so much an upgrade as it is a slight revision, but it’s worth grabbing if you don’t own the original Blotto.