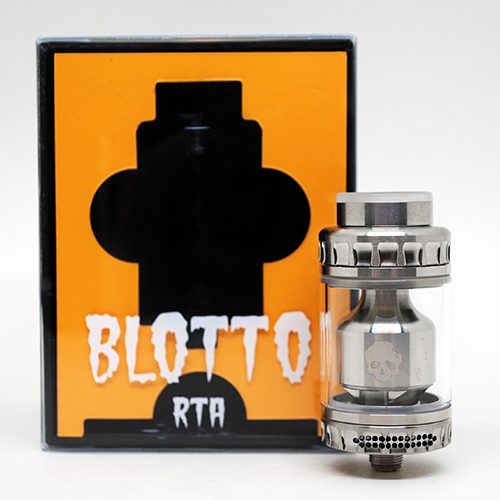 If you haven’t heard of him, Vaping Bogan is a popular Aussie YouTuber. He reviews all sorts of vape gear on his channel and I’ve watched him a bit myself. He’s got a bit of a foul-mouth but he’s honest and knows his stuff. In the past he’s collaborated on some popular tanks like the Vandy Vape Bonza and Bonza V1.5 RDA, both of which were top of the line tanks, and now he’s worked with Dovpo to create the Blotto RTA.

The Blotto is a large 26mm RTA with a 6ml capacity. It’s got two super wide airflow slots and large fill ports too. Everything about this RTA is big! It’s also got a super interesting build deck with a 242 degree airflow configuration that looks like it will pump out some huge clouds. If it delivers on flavor then this could this be Bogans best product yet.

This is a big tank! It’s 26mm in diameter and from the top cap to the base, all of the components are large. The design of the top cap and airflow control ring are modeled after a beer bottle cap and that’s kinda neat. The deep square ridges that surround the top cap and airflow ring make it easy to grip but they’re a bit sharp. They’re not sharp enough to cut you but they could have still been dulled down a little.

Other than these semi-sharp grooves, the machining on this tank is good. The threading that connects the chimney to the build deck is smooth, as is the top cap. All of the components are very well built.

There’s minimal branding on the Blotto. The bottom of the tank has Dovpo, Blotto RTA and Vaping Bogan on it but there’s not much else anywhere on the tank. A single skull on the chimney is all you’ll see when it’s attached to a mod.

The drip tip on the Blotto matches with the color of the tank. I’m using the silver Blotto and the drip tip is mostly silver as well, there’s just a small portion on the tip which is a frosted clear color. It matches really well and looks very clean. It’s short, smooth, and rounded too so it’s also comfortable when vaping. If this drip tip isn’t your style, there are o-rings in the top cap so you can use any other 810 drip tip.

Filling this tank is easy. The top cap comes off with a little less than a half turn and opens to reveal two large kidney ports. No matter what kind of ejuice bottle you have, it will fit in these ports. To prevent leaking, the top cap has a silicone ring on the underside that seals everything in when closed.

You get a total of three glass tanks with the Blotto. A 2ml straight glass section comes pre-installed but you also get a 6ml bubble glass section and a 6ml ULTEM tank section. The Ultem tank honestly looks a bit weird but it’ll come in handy if you break the regular bubble glass.

I’m using the updated production run of the Blotto so even when you take the tank apart, there are o-rings that hold the glass in place. In previous runs the glass was really loose when you took the tank apart. It seems that they’ve fixed this issue and done a really good job, too.

The airflow control ring on this tank consists of two extremely wide slots. There are twenty-six holes per side and they are arranged in a honeycomb pattern. The airflow ring is adjustable and on a stopper. It’s easy to turn and has just the right amount of resistance. It’s not too loose and not too difficult to adjust either. But if you thought this airflow control ring was crazy, just wait until you see how it flows into the build deck.

This is a crazy build deck! It’s like a mash up of a bunch of different style decks combined into one. It’s essentially a postless build deck with four terminals that will accommodate either single or dual coil builds. But from the amount of airflow holes on the deck, it will probably function best with dual coil builds.

On either side of the deck is a wall that rises and does a semi circle around where your coil will sit. There are airflow holes all along this wall, as well in the base of the build deck. When your coils are installed, airflow will hit them from 242 degrees which will deliver absolute monster flavor and clouds.

This deck will work best with 3 to 4 mm inner diameter coils. Anything larger and you’ll have trouble fitting them under the curved walls. Anything smaller and you won’t get the full effect of the airflow. Plus, 3 to 4mm ID is perfect for the amount of cotton that you need to properly wick this deck.

The screws on the deck are small flathead screws that are easy to work with. They unscrew and tighten with ease. They also grip the coil legs properly and hold the coils securely in place.

Building on the Blotto RTA

The trickiest part of using an RTA is getting the build and wicking right and the Blotto is no different. There’s a bit of a learning curve but once you get it down it makes this tank one of the most flavorful RTAs out there, bar none.

You’ll want to start with a 3-4mm ID coil. 3.5mm is going to be the sweet spot; not too big not too small. Your coil legs should be trimmed down to 3.5mm as well. If you have a measuring tool then use that.

Loosen the screws on the build deck and drop your coils in. There should be one coil under each ‘wall’. Make sure that the coils aren’t touching either or touching the side walls of the deck as this could result in a short. You want the coils to be ‘hugged’ by the walls but not touching.

Once the coils are installed and screws are tightened it’s a good idea to pulse the coils at low wattage. Spacing your coils will be the easiest way to ensure that they glow evenly. After a few good pulses and a light strumming with your ceramic tweezers they should glowing evenly and good to wick.

Now comes the most difficult part. Using agleted cotton makes wicking a lot easier so use that if you have it. Make sure your coils are cooled down before you wick! Thread your cotton through the coils and fluff them out a bit to remove any bunched up cotton. You should use the base of the build deck as a measuring point to trim your cotton.

Now push your cotton through the wicking ports while making sure that you don’t leave any gaps. If there’s a gap in your wicking ports then this could lead to leaking. Once you’re done, juice up your wicks and replace the glass and tank assembly. Fill the tank up and let it sit for a minute or two and you’re good to go! 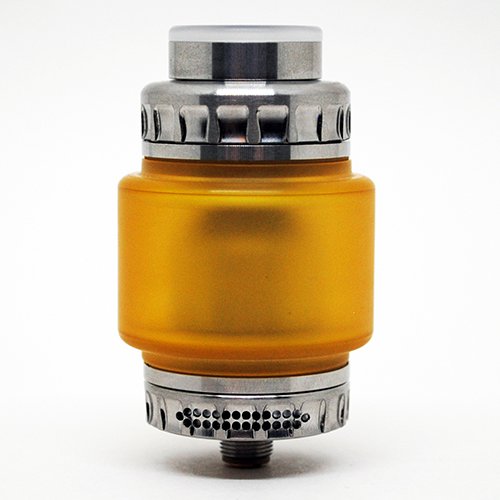 Vaping Bogan has done it again with this one. I knew just from looking at the build deck that this was going to be a cloud and flavor beast and boy was I right. It’s honestly one of the best RTAs I’ve tried! I installed a dual coil clapton build that came in at 0.14ohms and at 85W with the airflow open it’s a dreamy vape. Smooth draw, awesome flavor and lots of clouds.

Even with the airflow fully open this tank has a bit of restriction in the draw. I tended to just leave the airflow open but sometimes I would close it down to three-quarters open for a tighter draw. The airflow is really smooth and quiet too which is surprising for the amount of airflow holes. You get a very nice draw off of this tank and it’s extremely enjoyable to vape on.

Bottom airflow RTAs are known to leak so I was expecting the worst. But in all my time of using the Blotto RTA I didn’t have any leaking, just a little bit of condensation build up. This is of course due to the fact that I wicked the build correctly. If you mess up you can definitely have leaking but that’s just the nature of RTAs. It’s safe to say that I’m very happy with this tank. 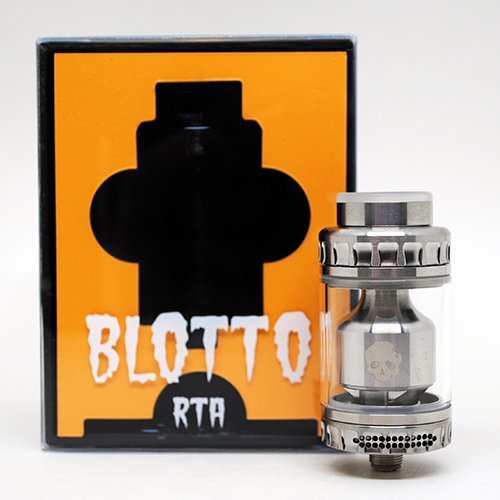 The Blotto might just be the best dual coil RTA out right now. The flavor is on point and definitely what I would call top notch. In addition to the phenomenal flavor it also has a huge tank capacity, a nice design, and a super smooth and slightly restricted direct lung draw from that 242 degree airflow. It might be a little challenging for beginners to build and wick right but it’s worth learning. Bogan got everything right with this RTA and I would highly recommend adding it to your buy list.