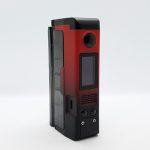 The Topside Lite is the latest squonk mod by Dovpo and Brian from The Vapor Chronicles. The Topside Lite is a single 18650/20700/21700 battery mod like the Topside 90W mod but with a lightweight PCTG and polycarbonate shell. It has the same maximum wattage output of 90W and a 10ml, top-filled squonk bottle.

The big difference is that the squonk section on the Topside Lite can be removed and replaced with a cover that transforms it into a regular box mod. It’s a squonk mod and dedicated box mod all in one device.

The Topside line of squonk mods became popular in 2019 for their top-filled squonk bottles secured with a cap; just unscrew the cap, fill the bottle and you were ready to squonk again. This eliminated the mess of having to remove the squonk bottle to fill and this instantly made the Topside devices a huge hit.

The Topside Lite Kit also comes with the Variant RDA. It’s a four post, dual coil RDA that is sort of like an upgraded Digiflavor Drop RDA (also designed by Brian from TVC).

Is the Topside Lite the squonk mod to get? And if it is, is the Variant RDA worth grabbing the kit for? 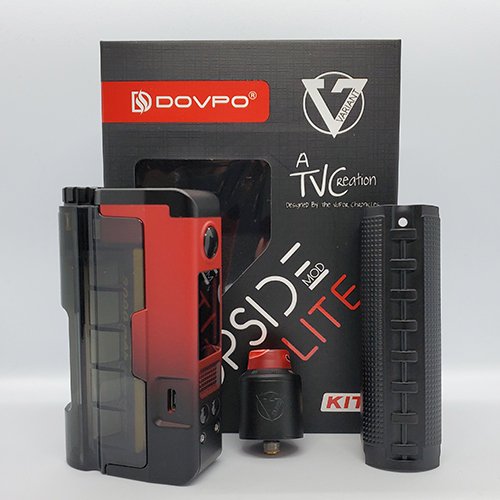 The Topside Lite has the same overall shape as the Topside 90W but it’s just bigger in every way. It’s a little taller, wider, and thicker but not by much. It also feels about the same weight, which isn’t too heavy at all. It’s a really good looking mod and it feels great in the hand.

The two mods look very similar to one another but it’s easy to tell the Topside Lite apart because of its polycarbonate squonk section. This squonk section has a dark tint but I can still see my battery and the squonk bottle inside. It looks good but it scratches quite easily. The rest of the Topside Lite is made of zinc alloy. The one I’m using is painted in a matte red color that fades to black near the bottom.

The squonk section is removable and held in place by a magnet at the bottom of the mod, two magnets at the top and a squonk pin at the top of the mod. When connected the squonk section is very solid and sturdy and doesn’t move at all. The squonk bottle has a huge 10ml capacity and it’s very soft and squishy. It’s very easy to squonk with this mod because you don’t have to struggle.

Like the other mods in the Topside family, the squonk bottle can be refilled by unscrewing the top cap. The threading on the cap is smooth and it’s a lot easier to remove and replace than the other Topside mods. Removing the fill cap reveals two large fill ports that can accomodate any size bottle nozzle.

Removing the squonk section allows you to convert the Topside Lite into a regular, single battery box mod. To do this you also have to unscrew the squonk pin that is on the mod. This pin is small and easy to lose so do your best to hold on to it! Thankfully, Dovpo includes two extra pins in the accessory bag if you do happen to misplace it.

With the squonk pin removed just attach the battery cover door and the Topside Lite becomes a completely different mod. It becomes ultra thin and super compact which is perfect to take out and around. I can even put it in my pocket with ease. The battery door doesn’t wiggle at all as it’s held securely by the same three magnets that hold the squonk section.

I’m impressed by the build quality on the Topside Lite. It’s very well constructed and everything fits together snugly. The way that they made the squonk section removable is daring and innovative but Dovpo implemented it flawlessly. 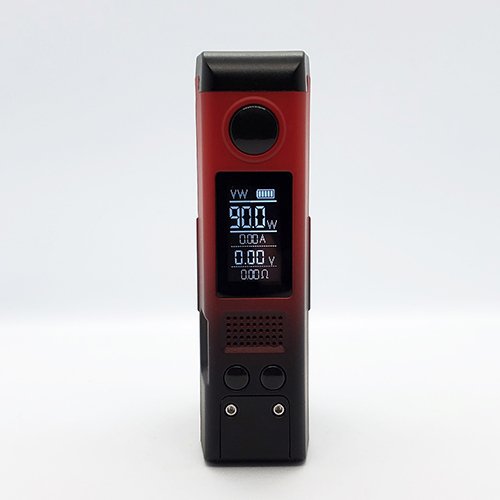 The Topside Lite has Power (wattage) mode, Bypass mode, Temperature Control mode and TCR. In wattage mode it can fire from 5-90W which is standard for a single battery mod. It has support for Temperature Control with nickel, titanium or stainless steel and a temperature range of 200° to 600°F.

The screen displays the current mode, wattage, amperage, voltage and coil resistance. There’s also a battery life indicator in the top right of the screen. The Topside Lite is just as easy to use at its predecessors.

Not much changed from the other Topside mods here so I can’t imagine that the performance will be much different either — and that’s a good thing.

If you purchase the Topside Lite kit then you’ll also get the Variant RDA. It reminds me a lot of the Digiflavor Drop or Drop Solo and there’s a good reason for that; it’s designed by the same person, Brian from TVC.

Looking at the Variant from the airflow side it looks a lot like the Drop Solo with two columns of four airflow holes. It also has the same notches at the base of the deck to hold the mid cap in place.

The airflow options on this RDA are crazy. The top cap has a series of steps in it that, when turned, allows the airflow to be set in almost every way imaginable. This ranges from an airy DL draw to a slightly restricted DL draw.

While the airflow options are a pro, a con for me is how easily the mid cap comes off. It’s not on there snugly enough and the notches at the base of the deck don’t do much to hold it in place either.

The build deck looks just like the one on the Drop. It’s got four raised posts that are angled inwards which allows you to trim your legs after you’ve installed your coils. The posts are secured by flat head screws. There’s a lot of room on this build deck so it can accommodate large coils with ease. The juice well looks quite deep as well.

The center of the build deck has an interesting squonk valve. Instead of having to swap out 510 pins, just loosen the squonk valve with a flathead screwdriver and the Variant is ready to squonk. Ejuice will squonk out of this center valve.

NOTE: If you’re going to be squonking then make sure that you loosen the valve before you build on the Variant. If you don’t then it will be difficult to loosen once your coils are built and wicked.

In the Variant RDA I used a pair of 3mm ID fused clapton coils which came out to 0.20ohm. I used a 70VG, 6mg nicotine ejuice for my testing. After going through a bunch of the airflow options, I ended up closing the bottom four airflow holes and leaving the top four open. This gave the best flavor and a warm draw at 45W.

The draw is a slightly restricted DL and the airflow is smooth. It’s virtually silent with no whistling or turbulence.

Flavor is okay with the Variant and I have to say that the Drop is still the more flavorful tank. The flavor also isn’t as full and true to my ejuice when compared to newer, better RDAs that are out right now. Flavors that are more subtle or complex don’t come through like they should on this RDA.

The Topside Lite has been nothing but reliable in the time that I’ve been using it. It fires instantly and outputs up to 90W without breaking a sweat. One minor annoyance is that when it’s in standby, the screen takes a few presses of the fire button to turn on. This can get frustrating but it’s not a huge deal.

Squonking is a breeze. The squonk attachment and mechanism work flawlessly and with little effort required. Dovpo really perfected the squonk system on this device because I haven’t had a single issue with it.

The Topside Lite performs just as good as a single battery box mod. The small and compact form has led to it replacing my other single battery mods so I’ve been using it quite a lot and I’m going to continue using it for the foreseeable future.

The Topside Lite is another home run for Dovpo and Brian. It retains everything about the Topside series that made them so good while bringing a brand new modular design that they implemented flawlessly. Design and build quality are excellent. The device looks and feels great and everything fits together like it should.

The Variant RDA is an average tank but it’s not bad. If this is going to be your first squonk mod and you don’t have an RDA, the kit isn’t a bad choice. But if you’ve already got a capable squonk RDA, you’re better off just grabbing the mod.