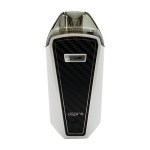 The AVP Pro is the newest pod vape from Aspire. It’s a revamped version of the Aspire AVP and it brings a few noteworthy upgrades to the table like adjustable airflow, replaceable coils Type-C charging, and four wattage levels as opposed to the three wattage levels on the AVP.

The AVP Pro also has a larger 1200mAh battery and a roomier 4ml pod. Aspire has upgraded almost everything from the original AVP so it’s going to be interesting to see how the AVP Pro performs.

The AVP was great but is the AVP Pro even better? Keep reading to find out!

The device used for this review was sent to me free of charge, directly from Aspire Vape Co. 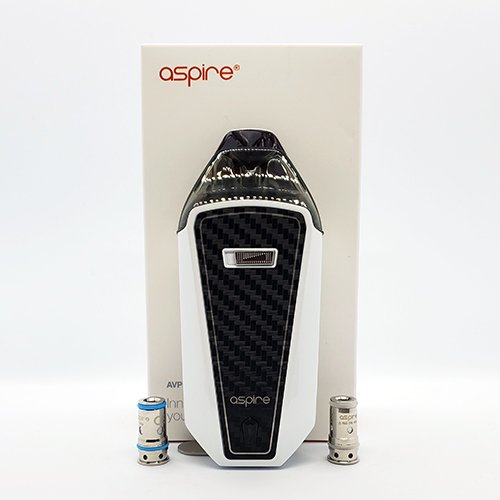 If you’ve seen the AVP then the design of the AVP Pro should be familiar. It’s got the same shape and overall design but it’s much larger and heavier than its predecessor. The AVP Pro looks like the AVP’s big brother who you don’t want to pick a fight with. It’s average sized for a pod device though and while it does have some weight to it, it feels sturdy and premium.

The body is made out of zinc-aluminum alloy and the black unit that I’m using is finished with a rubberized matte coating. It reminds me of the paint on the Vaporesso Gen but only slightly softer; it feels really good. The front and back of the device have high quality carbon fiber panels that feel good and give the AVP Pro a modern and premium look.

On the front of the AVP Pro there’s an airflow control switch and a small power button. This is strictly a draw-activated device so the power button is not a fire button. It’s there to turn the device on or off or switch through the wattage levels when using the 1.15ohm coil.

I found that the AVP Pro performs best with the airflow switch fully open, regardless of which coil I used. Closing off the airflow restricts the draw too much and it’s much, much too tight for my liking.

The switch is also quite small so there isn’t much room to set the airflow anywhere in between. I like the idea of the airflow switch but I wish that there was more room to adjust it.

How to use the AVP Pro

The AVP Pro has four wattage levels as opposed to the three on the AVP. However, the wattage can only be adjusted when using the 1.15ohm coil. When using the 0.65ohm coil the AVP Pro will fire in bypass mode which provides direct voltage to the coil based on remaining battery life. This is anywhere from 10-16W.

The four wattage levels for the 1.15ohm coil are:

To turn the AVP Pro on or off, press the power button five times. This is a draw activated device only so just inhale on the mouthpiece to start vaping.

Another change from the original AVP is that the AVP Pro uses replaceable coils. The pod is bigger too and now holds 4ml of ejuice. Otherwise, the shape and design features of the pod are the same. These pods aren’t interchangeable with the original AVP.

The pod is lightly tinted but it doesn’t obscure the view of ejuice inside. Being able to see my remaining ejuice without having to struggle gets the AVP Pro a big thumbs up.

The pod attaches to the battery magnetically. It sits snug and secure and doesn’t wiggle at all. The magnets are strong and keep the pod from coming out accidentally but it’s not difficult to remove the pod when I need to.

The pod uses a push-to-fill port that I really like. Pushing the nozzle of your ejuice bottle on the port opens up a valve which allows ejuice to flow into the pod. When you stop pushing, the valve closes and prevents any ejuice from leaking out.

This is an extremely secure filling method and I much prefer it over traditional rubber stoppers because it’s easier to fill and less likely to leak. The downside is that dropper bottles can be difficult or impossible to fill this pod. You can always use a refillable, pointy-tip bottle as a solution though.

Two coils come in the package: a 1.15ohm regular round wire coil and a 0.65ohm mesh coil. The 0.65ohm coil has a draw that is a bit less restricted than the 1.15ohm coil but not by much; it’s such a slight difference that I would call the draws virtually identical.

These coils push into the bottom of the pod and click into place. You’ll know that the coil is seated properly when you hear the click.

The AVP Pro has a 1200mAh battery which is a big upgrade over the 700mAh capacity of the AVP. This is an absolute monster battery for a pod device of this size and it lasts through a lot of vaping, even with the 0.65ohm coil firing in bypass mode.

With the 1.15ohm coil I switched between the blue (12W) & green (14W) wattage levels and got through an average of two and a half full pods before having to recharge. That’s somewhere around 10ml+ of ejuice. Impressive stuff.

With the 0.65ohm coil I averaged just shy of two pods from a full charge. That’s not as good as the 1.15ohm coil but still ~7ml of eliquid.

A feature I love is that the AVP Pro uses Type-C charging! It has a 2A charge rate so it doesn’t take too long to replenish the massive battery. I timed an hour and twenty minutes from dead to full. That’s longer than the average of one hour I see with other pod vapes but those are usually well under 1000mAh. For the extra battery capacity, waiting an extra twenty minutes is worth it. 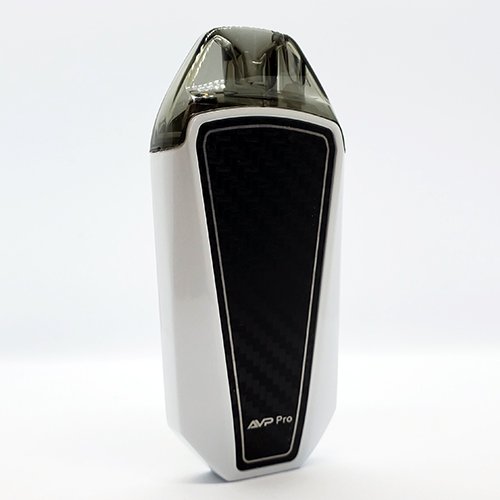 The moment you’ve all been waiting for: how does the AVP Pro perform? Well, I used a 60VG nicotine salt ejuice in 35mg strength to test the two coils and I’m decidedly happy with both of them.

As I mentioned before, the AVP Pro worked best for me with the airflow switch left fully open. Closing the airflow down restricted the draw too much and made using nicotine salts a less pleasant experience.

The 1.15ohm coil is a flavorful coil and the draw is warm and pleasant on the blue or green setting. The white output level was too harsh and felt as if the coil was being overpowered. The restricted MTL draw is very good and my nic salt delivered a very satisfying, noticeable throat hit. Nic salts kick in this device but they aren’t harsh — it’s a super nice throat hit.

Despite being a lower resistance and working in bypass mode only, the 0.65ohm coil is quite similar to the other coil. The mesh makes this coil a bit more flavorful but it’s not a drastic difference. On a full charge the throat hit is stronger than the 1.15ohm coil but it still isn’t too much. A lower nic salt strength like 20-25mg would be perfect for this coil.

The AVP Pro is officially my new favorite Aspire device. After the AVP I was unsure if they could make something better but they’ve proved me wrong. The replaceable coils, tighter draw, larger pod capacity and Type-C charging are valuable upgrades that really make the AVP Pro a top contender for the best pod vape of 2020. It’s also certainly one of the best vapes for nicotine salts that I’ve used and beats out a lot of the competition with its throat hit and flavor.

Have you used the AVP Pro? Are you thinking about getting one? Let me know by leaving a comment. I’d love to hear your thoughts!