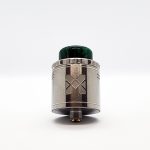 The Mesh V2 is a mesh RDA from Vandy Vape. It’s the version 2 of the original Mesh RDA which was an excellent tank with good flavor and clouds. Vandy Vape makes some of the most popular vaping mods and tanks and we’ve reviewed quite a few of them in the last year such as the Mutant RDA, Kylin M RTA, BSKR V1.5 RTA and Jackaroo mod.

The Mesh V2 is a 25mm mesh RDA with a dual clamp build deck. It has top slotted airflow, a 2ml deep juice well and a spring loaded center block like the Wotofo Profile 1.5 RDA. The Mesh V2 comes with everything needed to build on it, including four different types of mesh strips.

This RDA was sent to me by MyVPro for the purpose of this review. 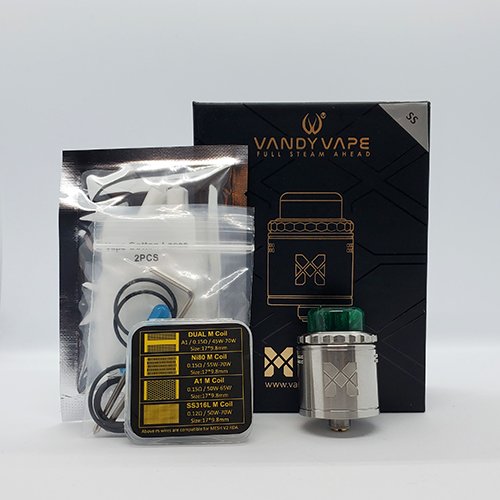 The Mesh V2 is a neat and clean looking RDA. It has a simple look but the few design elements it does have really make it look good. One is the ridges along the top cap. They add some sophistication to the Mesh V2 while also making it easier to adjust the airflow.

I have the stainless steel Mesh V2 and I like it a lot but some of the other colors like the ‘Shiny Blue’ are just stunning. The matte ‘Frosted Grey’ color also looks super good.

There are no imperfections to speak of on the body of this RDA. The logo is the same as the original Mesh RDA and it’s perfectly engraved. The airflow holes are similarly perfect. The top cap was difficult to turn when I first tried it but after lubing it up with some ejuice it now turns smoothly.

The Mesh V2 comes with a single press-fit 810 drip tip. It’s a resin drip tip and it’s beautiful; rounded and thick. If you don’t like this drip tip or have another you want to use, any 810 should fit.

One thing I don’t like about this RDA is switching the standard 510 pin for the squonk pin. Unfortunately, it’s not as simple as removing the 510 pin and replacing it with the 510 squonk pin.

To convert the Mesh V2 for squonking you have to remove the 510 pin and also remove the screw that holds the spring loaded center block on the build deck. This means that if you have a build in the Mesh V2, you won’t be able to switch it out for squonking. So if you want to squonk, make sure you replace the pin before building.

The build deck on the Mesh V2 features dual clamps inside of two blocks so it’s essentially a postless build deck. The clamps are just the right size to fit the included mesh. They’re secured by small Philips head screws. It’s really easy to build and wick this deck, even if you’re a complete beginner to mesh.

In the center of the build deck is a spring loaded block, much like the one on the Profile 1.5 RDA. The problem is that it’s not very strong so it doesn’t have enough strength to actually push up the cotton. Make sure that when you’re building you use thick enough cotton to fully contact the mesh. Don’t rely on this center block.

The juice well is a respectable 2ml capacity so there’s plenty of room to over drip or over squonk. And with the airflow holes at the top of the tank there won’t be any leaking even if you really overdo it. It’s a nice build deck setup.

Airflow on the Mesh V2 is made up of two rows of 10 holes on each side of the tank. It’s positioned near the top of the body so this is a top airflow RDA, but the top cap has slots that angle downwards. Air gets drawn through the holes and directed downward from the slots in the top cap, directly to the coil.

What’s neat about the Mesh V2 is that you can turn the mid cap to position the airflow holes to hit the center of your coil, even if you close them off. The mid cap rotates and locks and this also makes it easy to screw or unscrew the Mesh V2 on a mod.

With the airflow holes open, this RDA delivers an open DL draw. It’s not quite airy but it’s definitely not restricted. Closing down the airflow adds a bit of restriction but not much. In my experience, I found that the Mesh V2 is best used with the airflow completely open or with just one or two lines of holes closed.

I tested the Mesh V2 using all four included mesh strips. This is meant to be a mesh RDA so I didn’t use regular coils; there are better RDAs for that. The four mesh strips I tested are the ones included in the packaging:

While all of the mesh strips have different recommended wattages, they all seemed to work best from 55-70W. The mesh strips are made quite differently from one another, with the SS316L being the finest mesh and the Ni80 being the most spaced out, but they actually perform quite similarly to one another.

I used a 6mg regular nicotine ejuice at 80VG to test out all four strips. Like I said, they’re very close in flavor to one another but I would say that the SS316L provided the best flavor, followed by the Ni80, then the A1, and lastly the Dual M.

If I had to compare this RDA with the Profile 1.5, I would say that the flavor isn’t close. The Profile 1.5 has much truer and more accurate flavor. However, the Mesh V2 isn’t bad at all. In fact, I think it’s a really good mesh RDA, just not as good as the Profile 1.5. Flavor is just a bit muted on the Mesh V2 and isn’t as intense.

I tried to use the Mesh V2 as a dripper but like most mesh RDAs, it works better as a squonker. I had to drip way too often, like after every couple of draws, so squonking is much more convenient. The juice well is deep enough that I never had any flooding or leaking. Not to mention that the mass amounts of cotton absorb the ejuice really quickly.

The Mesh V2 might not be as good as the Profile 1.5 but it’s still a great mesh rda. Vandy Vape have done a really good job with this tank and it’s awesome that they included four different mesh strips. If you’re looking for the best flavor from a mesh RDA, go for the Profile 1.5. But if the absolute best flavor isn’t a huge deal, the Mesh V2 is a respectable tank that will have you blowing huge clouds in style.