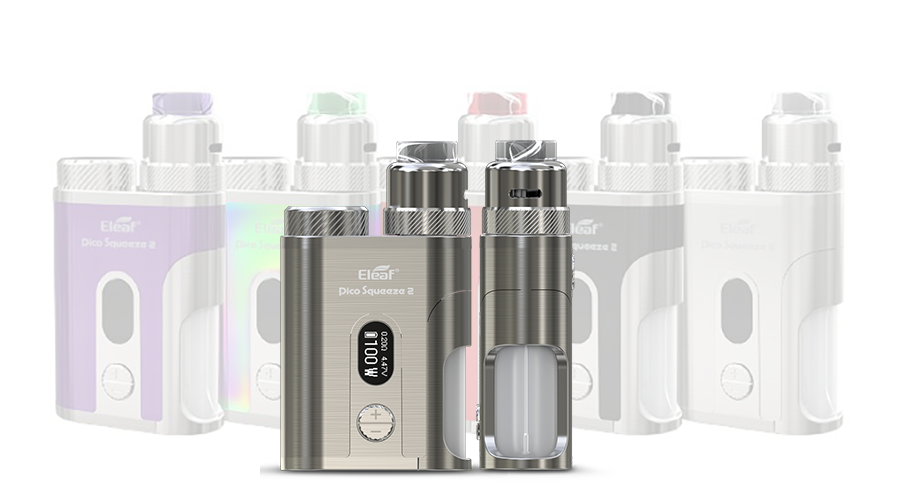 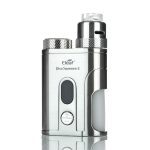 Now, with the release of the Pico Squeeze 2, Eleaf hopes to build upon that success. Featuring a new regulated chipset that can fire at up to 100W, an OLED display, and support for Temperature Control Mode, the Pico Squeeze 2 is larger, more powerful, and more feature filled than its predecessor.

Also included with the kit is the all new Coral 2 RDA, which is designed for use with single-coil builds. The Coral 2 features a single airflow slot, and comes with a solid 510 pin, as well as a bottom feeding squonk pin.

Is this a squonk mod worth purchasing? Keep reading our Eleaf Pico Squeeze 2 review to find out. Let’s get right into it! 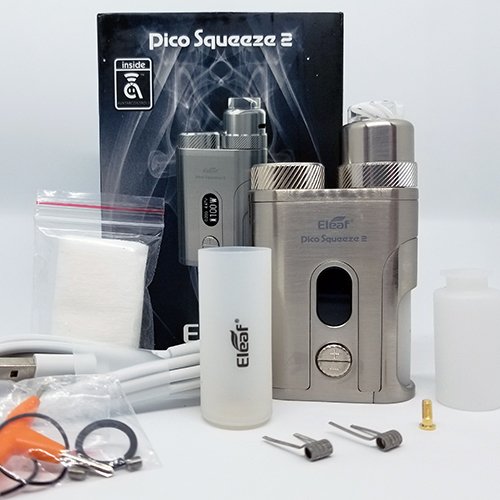 The Pico Squeeze 2 comes in a small box with a sleeve around it. This sleeve has a picture of the device in the same color as the Pico Squeeze 2 in the box. When you open it up you’ll find: 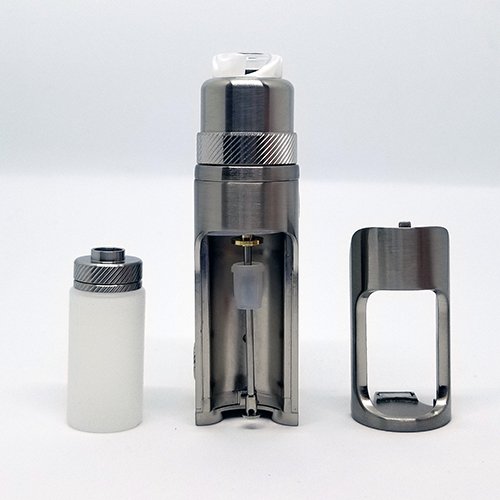 The first thing you’ll notice when you grab the Squeeze 2 out of the box is its weight. It has a solid feel and is pretty heavy, even without a battery. While I like the weight and presence of the Squeeze 2, others might disagree and will find it a bit on the heavy side.

The stainless steel finish that we tested is beautiful, and has held up well without any visible signs of scratching or damage. Even the Eleaf and Pico Squeeze 2 branding, which is positioned on the front of the device, is in perfect condition.

Eleaf has stayed true to the design of the original Pico Squeeze with a similar body shape and a battery cap that is positioned next to the atomizer. The Pico Squeeze 2 is designed for use with a single high amperage 21700 battery. However, it will also function with movement with a 20700 battery. Additionally, you can use an 18650 battery by using the included adapter.

The Pico Squeeze 2 has a simple 3 button layout. A “+” button and a “-” button located on the bottom front of the device, and the fire button located on the back. The adjustment buttons on the front are designed as a single circle, and each button is half of the circle. This leads to some trouble when adjusting the wattage and scrolling through the menus, as the buttons are so close together. I would’ve preferred if they were two seperate buttons spaced a bit farther apart, but not a huge deal.

The OLED display on the Pico Squeeze 2 is rather small at 0.49”, but it displays a ton of info. The font is crisp and clear, and we had no problem with the readouts.

As for the hallmark feature of the Pico Squeeze 2, the squonk bottle and its housing are extremely well done. To access the bottle, gently pull down and away to remove the housing. From here, you can remove the bottle by pulling it down and off of the rod.

The squonk bottle on the Squeeze 2 will hold up to 8ml of ejuice, and is just squishy enough to make it easy to squonk. Now, this is amazing, but it’s not why I love this bottle. The cutout at the top of the bottle is off center, and more towards one side. This is so when you insert the bottle, it will go in perfectly aligned and sit flush in the housing.

Adding a touch of flair to the device, there is a colored LED located behind the squonk bottle. This can illuminate in up to seven different colors, and aids in seeing your juice level. While a bit gimmicky, I found it rather useful.

While I didn’t like the design at first, through use it’s proven to be very easy to use and I haven’t experienced any instances of leaking from around the bottle. That’s rare to find in a squonk mod. Major points to Eleaf here. 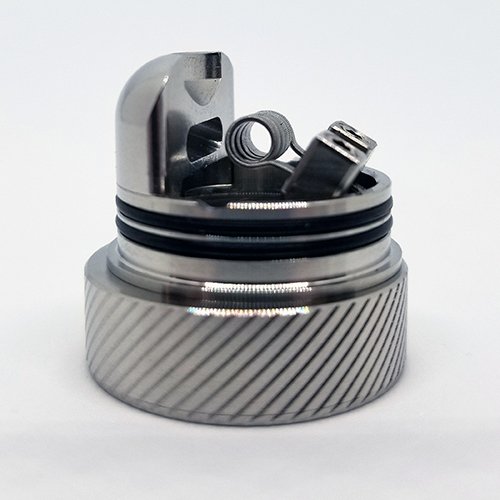 The Coral 2 RDA is 24mm in diameter, and comes with an optional decorative ring that matches the battery cover. This RDA is constructed of stainless steel, and features a two post build deck designed for single coil builds. The Coral 2 RDA has a single airflow slot, and is fully adjustable.

The deck on the Coral 2 is a “two sided” design. One side is fully open around the sides and has the two posts. The other side is enclosed, with only the airflow slot going directly to the coil. 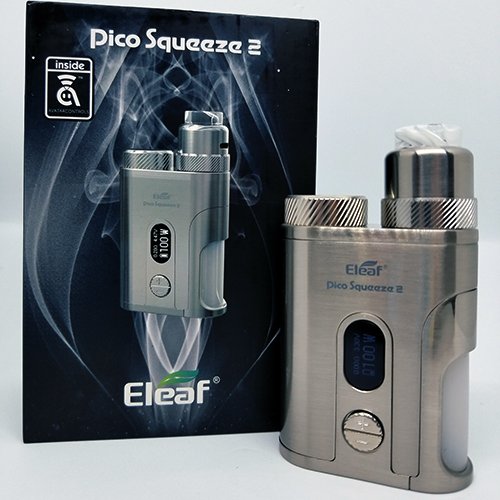 The Eleaf Pico Squeeze 2 is a single battery squonk mod that is powered by the all new “Avatar” chipset. For a relatively unknown chip, the Avatar delivers great performance and reliability. To turn the device on/off, click the fire button five times fast.

To switch between modes, click the fire button three times fast. This will also allow you to set/access your three memory modes for TCR Adjustments.

The 0.49” display will show vaping information such as your current wattage, battery level, and coil resistance, and gives you the option of selecting the last readout. By default, it will show voltage.

To change the readout, you can enter the menu by holding the “+” button and the fire button simultaneously for about 3 seconds. Then hit the + button to go to the next item, and hit the fire button. This will allow you to select between displaying your puff count, total time puffed, or voltage. Pretty neat.

The menu also has a ton of other options. These include:

You can lock adjustment of the Squeeze 2 by holding the + and – buttons together for a few seconds. You’ll see “Key Lock” appear. To unlock, it’s the same thing. Unfortunately, this key lock doesn’t stop the device from firing. The only way to lock the fire button is by shutting the device off with five clicks on the power button. A little annoying, but hopefully this gets fixed in a future firmware update. On the bright side, the Pico Squeeze 2 turns on/off nearly instantly, so at least that lessens the inconvenience by a bit. 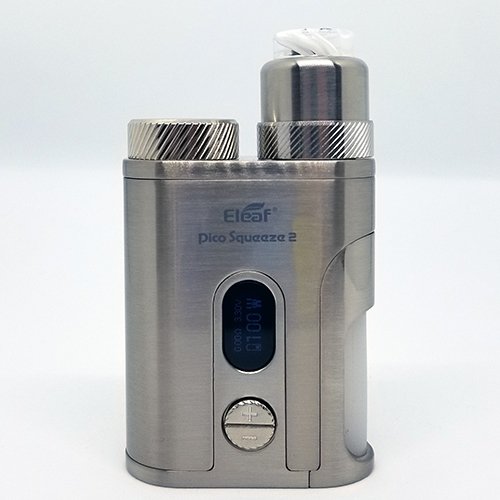 When it comes to performance, I have to say that I’m quite impressed with the Pico Squeeze 2. There simply aren’t that many great regulated squonkers out there, so I was excited to review this device. Fortunately, I wasn’t let down. The device fires near instantly when you hit the button, and was extremely reliable without any malfunctions.

The squonking performance is stellar on the Pico Squeeze 2, and as mentioned earlier, we had no problems with leaking of any sort from the bottle. The design and housing rod are a little strange in the beginning, but once you see how well it works, you’ll be sold. It’s extremely easy to fill and reinsert the bottle, and the chances of making a mess are minimal if you’re careful. The little rubber tip attached to the rod makes a great seal, and overall, the entire squonking mechanism is very well built.

The Squeeze 2 does well with some of the most popular squonk RDAs on the market, and we personally tested it with the Drop RDA, Dead Rabbit RDA & Bonza RDA in addition to the Coral 2 RDA. They all performed great, and we had no problems with squonking.

Talking specifically about the Coral 2 RDA, it definitely isn’t the greatest RDA you can get. However, that doesn’t mean that it doesn’t deliver at all. Rather, the Coral 2 RDA is actually pretty decent flavorwise, but has a few issues that hold me back from using it.

Firstly, I had a few instances of leaking from the airflow hole, as the deck on the Coral 2 isn’t that deep. You have to be very careful not to over squonk, or else it will flood and create a messy disaster.  When it comes to the deck, your leads will have to be precut. Not bad, however securing your coil onto the deck is rather difficult, and it takes a bit of patience to get it in.

Additionally, the Coral 2 RDA gets extremely hot after a bit of chain vaping. I was vaping at around 60W with a 0.2ohm clapton, and it was almost too hot to touch.

What’s the final verdict in our Eleaf Pico Squeeze 2 Review? From myself, it gets a solid recommendation. The Pico Squeeze 2 is a reliable squonk mod that will fire at up to 100W in power mode, and is also capable of bypass, VW, and Temperature Control mode as well. The settings are very adjustable, and the LED is a nice touch. The squonking mechanism works without a hitch, and it’s easy to fill and reattach the bottle. For these reasons and more, the Pico Squeeze 2 makes a great regulated squonk mod and will make a great daily-driver.