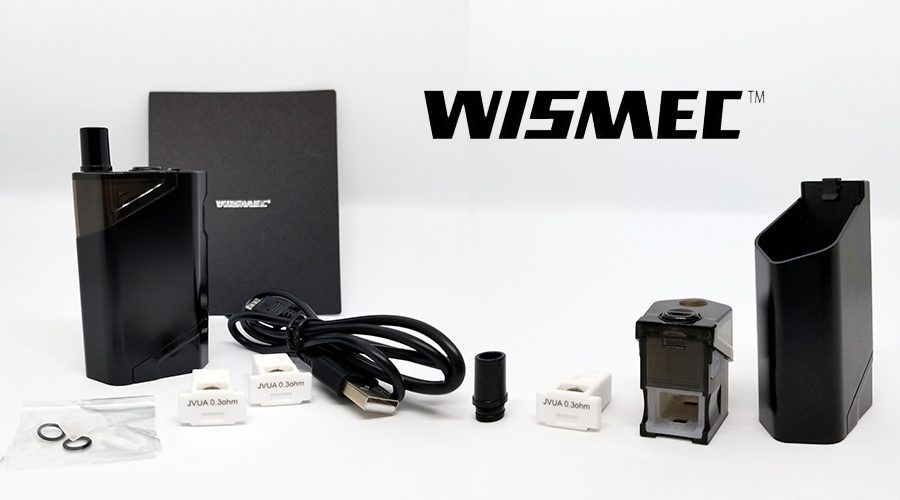 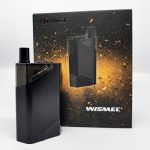 Wismec are a company known for producing great vape mods. If you’ve ever used the RX Mini or RX Gen3, you’ll know what I’m talking about. So when we heard that Wismec had released an all-in-one, pod style mod, we thought we would check it out.

With the Wismec HiFlask, you have no ability to swap the tank or mod itself with another device, and the battery is built in and non-removable. The device itself is small, lightweight, and is marketed as an easy to use starter kit meant for beginner vapers.

In this in-depth Wismec HiFlask review, we’re going to go over everything you need to know about this device. Is the HiFlask worth picking up?  Keep reading to find out!

What’s In the Box 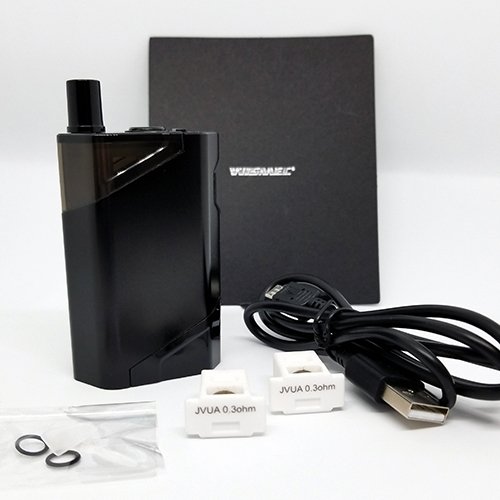 For such a small device, the HiFlask comes in a pretty big box. Remove the sleeve, and inside you’ll find: 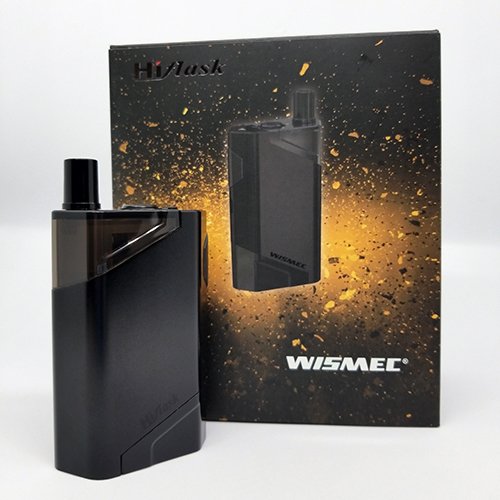 The Wismec HiFlask is a very lightweight and compact device. When I first took it out of the box, I was surprised at how small it was, especially considering the size of the box. However, although it isn’t large or heavy, it still feels quite solid and sturdy to hold in your hand.

The body of the device appears to be metal, while the base and pod are made of plastic. This gives the HiFlask a symmetrical look when viewed from the side. The fire button on the HiFlask is large and works with a satisfying click. To release the pod, there’s a small latch that you pull back.

The pod on the HiFlask is said to hold up to 5.6ml of ejuice, but I found this to be a bit of an overstatement. From my experience, the pod will hold maybe 3ml max. That’s almost half of the stated capacity. Another issue that I had with the Hilflask was being able to see your juice level. The dark tint on the pod makes it nearly impossible to tell how much juice you have in there.

The airflow on the HiFlask is adjustable to some extent, but I found it pretty limited. The airflow is adjusted by a little dial located on the top of the pod. This can be adjusted from min to max. One thing I noticed is that the pod tends to leak a little from the airflow adjustment. I found myself having to carry a cloth to wipe the little bit of ejuice away, but it was nothing major.

The battery on the HiFlask is 2100mAh, and is built-in and non removable. For an all-in-one device, the battery on this baby is on the large side. Thumbs up to Wismec here.

How to Use the Wismec HiFlask 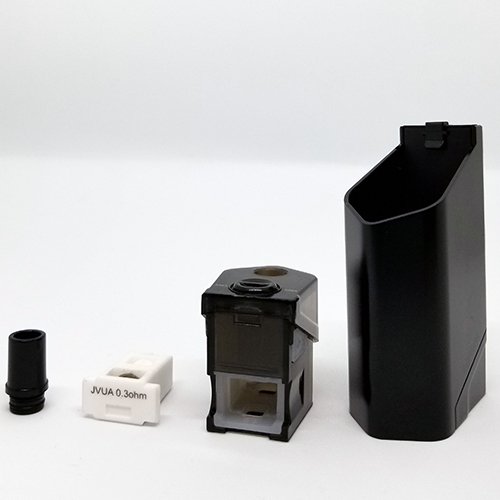 How to Fill the Wismec HiFlask 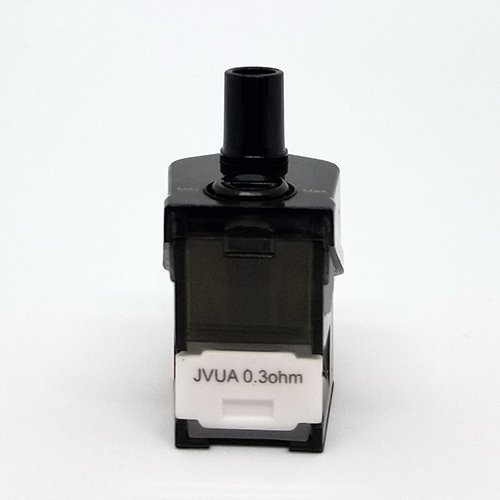 For such a nice device, especially one from Wismec, I was expecting the HiFlask to be amazing. Unfortunately, when it comes to performance, it’s rather average.

Firstly, there’s a bit of a leaking problem with the HiFlask. It isn’t anything major, but I constantly found myself wiping the device down due to small amount of juice on the body. It appears to leak from around the airflow control dial, as well as where the pod housing meets the mod.

Speaking of the airflow, while it is adjustable, it’s always very airy. Even on the min setting, the draw was very airy and provided a MTL vape. On max, there was too much air, and it diluted the flavor immensely.

Sadly, the flavor on the HiFlask using the 0.3ohm coils is rather subpar, and didn’t deliver very much taste. This might make the device better suited to those looking to smoke tobacco flavors, or a vape with very light taste.

When it comes to wicking, the 0.3ohm coils perform best with a 50/50 ejuice. I tried using a 70/30, but found that the coils were struggling to wick — at times, my hits were verging on dry. With a good 50/50 however, the coils seemed to do a fine job. At the time of writing this review, 0.3ohm coils are the only ones available for the HiFlask. However, Wismec could always introduce new coils to rectify this problem, and increase the size of the wicking holes. We hope they do this soon, for the sake of the HiFlask.

Rarely, the device would stop firing as I inhaled and held the button. What I found was that if I held the pod down, the problem disappeared. So I’ve deduced that the pod will lift sometimes as you draw, stopping the connection. Cleaning out the battery seemed to help, as did firmly pressing the Pod Housing down. 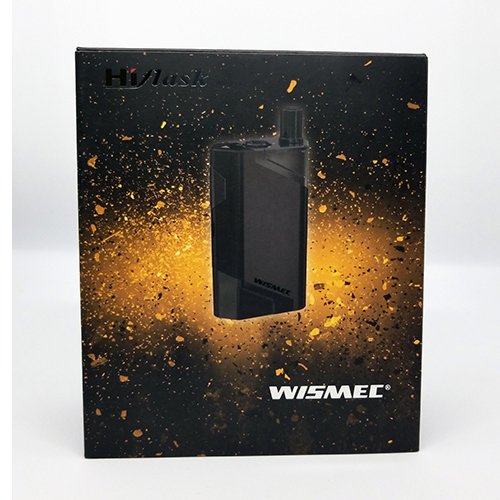 The battery on the HiFlask is solid. When you combine the 2100mAh battery with the 40W max output of the HiFlask when it’s fully charged, you get a device with plenty of vaping time. I vape pretty heavily, and went for 2 days without having to recharge.

To indicate your battery level, there is an LED located behind the fire button. If you have above a 60% charge, the LED will stay lit for a second or two after hitting the fire button. It will slowly flash from 30-59%, flash moderately from 10-29%, and flash rapidly when your charge is under 10%.

As for charging, a separate LED (located above the Micro-USB port) will illuminate red when charging, and turn off when fully charged. 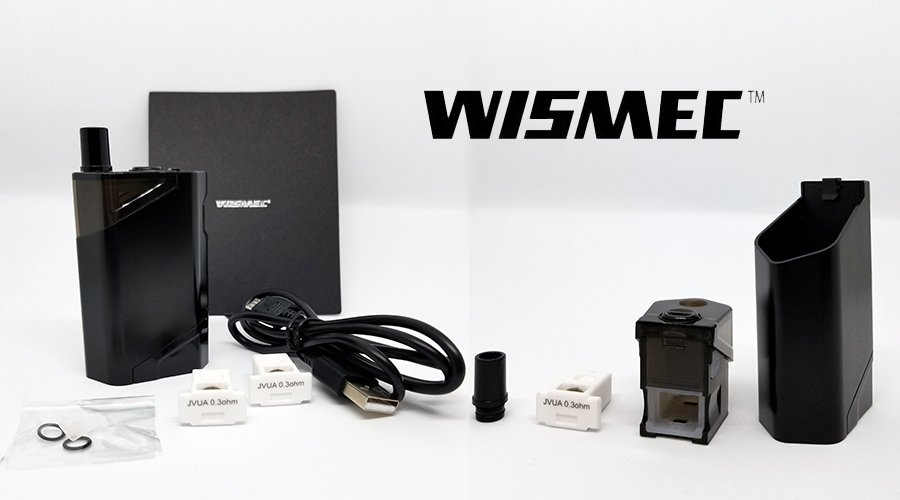 The Wismec HiFlask is affordable, portable, easy to use, and has a battery that will last for days. For these reasons alone, beginners will be attracted to this kit. However, while it may be suitable for someone just getting into vaping, I don’t think it will be very attractive to existing vapers. The MTL draw that the HiFlask provides is very airy, and lacks flavor.

If Wismec release new coils for the HiFlask, it could totally change the way the device vapes. By simply opening the wicking ports and adjusting the airflow control to allow for more restricted hits, the HiFlask could be a much better device.

Overall, the HiFlask is a rather average all-in-one device and there are some better alternatives out there. If you’re willing to shell out a little extra, the Aspire Breeze 2 is a great all-in-one device that is worth checking out. You can read our review here.

This device was sent to us by Vape Sourcing for review. This does not in any way affect our opinion or rating of the device.