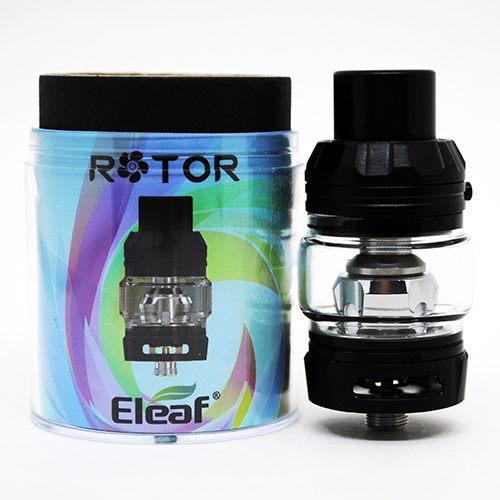 Eleaf Rotor Sub-Ohm Tank Review: These Coils Have a Fan in Them! 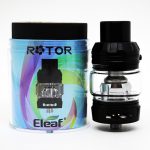 Just when you think that you’ve seen it all, another product comes along that proves you wrong. The tank I’m reviewing today is the Eleaf Rotor and it’s quite literally putting a new spin on sub-ohm coils.

The pre-installed coil on the Rotor has a little fan inside of it that spins. This concept has been seen before on some RDAs but this is the first sub-ohm tank to do the same. This fan is supposed to improve the flavor by more evenly distributing air within the coil. It’s also supposed to eliminate any possibility of spitback. I’m not sure how comfortable I am with a piece of metal rotating around inside the coil but I’m going to test it anyway.

The Eleaf Rotor will hold up to 5.5ml of ejuice and features a top-filled port that is secured by a button. It’s currently available in four different colors.

This tank was sent to me for review free of charge, directly from Eleaf.

Eleaf Rotor Sub-Ohm Tank Review: These Coils Have a Fan in Them! 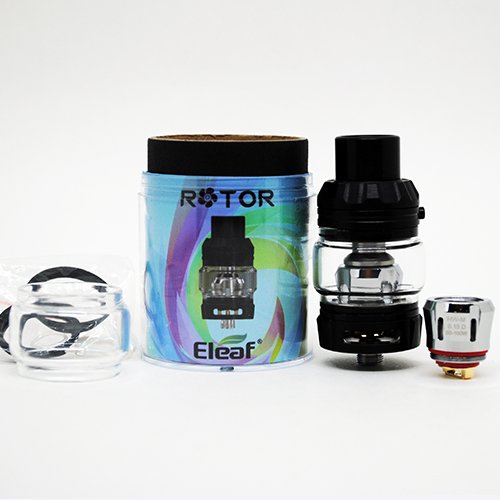 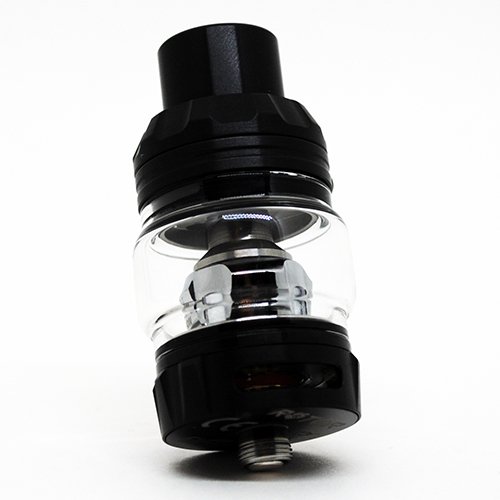 The Rotor is a well designed and good looking tank. I received the tank in black and it looks good paired with black mods. It’s got a 26mm base diameter so it’s an average sized sub-ohm tank that doesn’t overhang on most dual battery mods.

There are shallow, curvy indents along the top cap of the Rotor as well as on the airflow control ring. They make it easier to get a grip and adjust the airflow but they also give the Rotor a bit of visual flair. They’re still very understated on the black version though.

The build quality of the Rotor is good. The individual components are all well-made and assembled properly. The tank feels solid and durable which is about as much as you can ask for.

I really like the fill system on this tank. There’s a button on the top cap that you have to press in order to unlock and slide the top cap. This makes it very unlikely that the top cap will open and spill ejuice from the fill port. Even though the top cap is already pretty rigid, I like the extra layer of security. 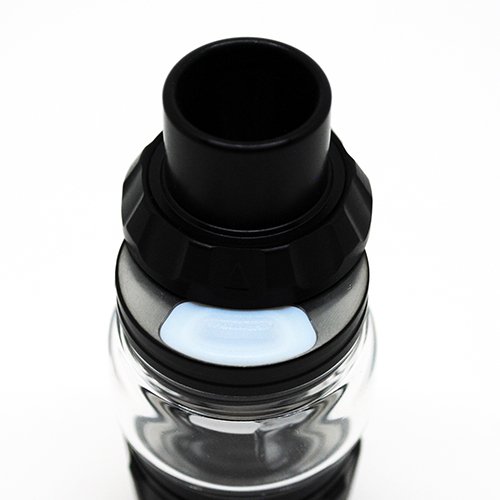 The fill port itself is covered by a silicone guard. There’s a slit in the silicone for you to insert your ejuice bottle nozzle. In combination with the locking top cap, I don’t see how ejuice can possibly escape from this port. Awesome and thoughtful design here by Eleaf.

Tank capacity is another pro. The Rotor will hold up to 5.5ml of ejuice in its bubble glass tank. If you break it, Eleaf have thoughtfully included a spare bubble glass in the package. I practically never use straight glass tanks because of their lower capacity so I’m glad that Eleaf just included two of the bubble glass.

The drip tip on the Rotor is a bit different than others. It’s a wide 810 but you won’t be able to switch it out. Reason being is that the o-rings are on the drip tip itself instead of on the tank so if you try to swap another drip tip in there, it’s just going to float around and fall out. Not sure why they did it like this but I would have liked if they had included a second, shorter drip tip.

In the design and build quality department the Rotor gets a solid score.

The whole reason it’s called the Eleaf Rotor is because of its strange coil. The HW-T coil is a 0.20ohm mesh coil and in the center of it is a small rotating fan. Whenever you take a draw, the fan spins. It’s truly unlike anything that I’ve ever seen on a sub-ohm coil.

According to Eleaf, this rotating fan is supposed to enhance the flavor of your ejuice by evenly distributing the air around the coil. It’s also supposed to reduce spitback by catching any ejuice before it can escape. I’ve never really had spitback with a sub-ohm coil so that’s a bit of a moot pro but the flavor enhancement claims are interesting.

I am a bit iffy about having a small, rotating piece of metal spinning around the center of my coil though. These coils are mass-produced so I would think that the chances of one being loose is a real possibility. I’ve poked and prodded the fan though and it seems pretty solid. It certainly seems well attached but this still doesn’t stop me from being a bit nervous.

You also get an HW-M 0.15ohm mesh coil included in the package and this one is almost the same as the rotor coil, minus the fan in the center. 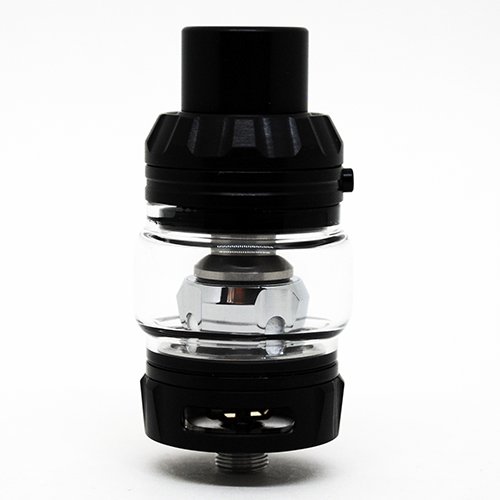 There are two wide airflow slots located at the base of the tank. These are fully adjustable and can be fully closed if you desire. The airflow control ring is not too stiff nor too loose; it’s actually just right. It’s easy to adjust and will stay put wherever you set it.

It’s a smooth, large direct lung hit with the airflow completely open. It’s not too airy though as to impact the flavor. Using the HW-T fan coil it’s a little on the louder side but there’s no whistling or turbulence. Eleaf say that the fan is supposed to smooth out the airflow and while I can’t say if it’s the fan that’s responsible, it is a smooth draw. And if you’re wondering, you can’t hear the fan rotating.

Strictly in regards to the airflow, the HW-M coil (the one without the fan) performs very close to the HW-T. There’s no noticeable difference in the draw or airflow restriction. It was just as smooth but the vapor was a little warmer. Does the fan cool the air a bit more? Maybe but I can’t say for sure. 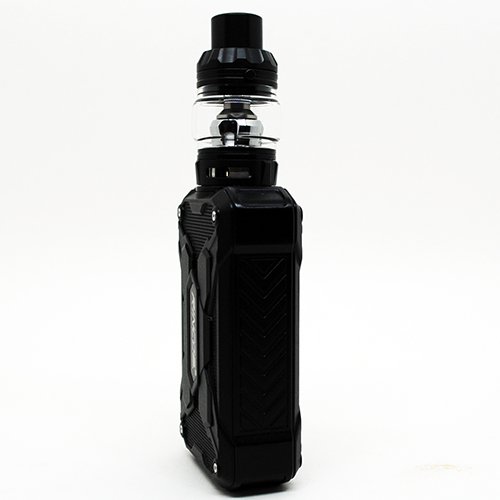 You probably think that the fan is nothing more than a gimmick. How can it possibly produce better flavor? To be honest, these were my thoughts exactly before I vaped on it. But while the rotor coil isn’t anything game-changing or revolutionary, the flavor is actually great and well above average.

The HW-T fan or rotor coil is the one that’s pre-installed when you get the tank so it’s the one that I started off with. It’s rated for 40-90W which is pretty accurate. I went as high as 100W with this coil without a problem but I found that it was best at 85-90W. I used 70vg/30pg ejuice as well as 60/40 ejuice and it wicked well and kept up with chain vaping all the way up to 100W.

I didn’t get any spitback with this coil (not that I really do with sub-ohm tanks) so there’s that. The flavor is great though and it must be because of the fan. I got some flavorful, cloudy draws and I really enjoyed vaping with this coil. It’s not quite on the level of the best sub ohm tanks of this year but it’s respectable.

The HW-M coil is 0.15ohm and it’s rated for 50-100W. This one vaped best at 70-80W. The flavor isn’t as good as the rotor coil though. It’s not all bad but I would place it somewhere in the average range. The major difference between the two coils is the wicking. Although it’s rated for 100W it doesn’t wick well at high wattages, at least for chain vaping. After a few quick, short hits at 100W I got the verge of a dry hit and turned the wattage down. At 80W it wicked without an issue. 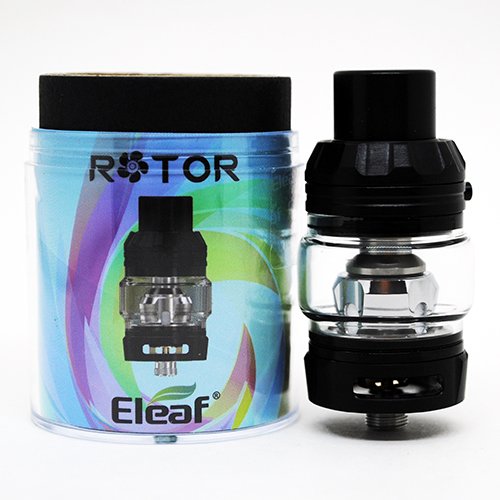 What can I say, I’m impressed. The fan coil turned out to be a lot better than I thought it would be. It puts out some large clouds and the flavor is on-point. No, it’s not the best sub-ohm tank for flavor but it’s still great. The other coil is pretty average though and nothing to go crazy about.

I think the design of this tank is also nice. It’s got a clean aesthetic with some practical features too. The button to unlock the sliding top cap is an excellent design and the silicone guard over the fill port makes it even less likely to leak.

The only real change I’d make would be the o-rings on the drip tip. If they were placed in the top cap instead then that would have been ideal for compatibility with other drip tips.