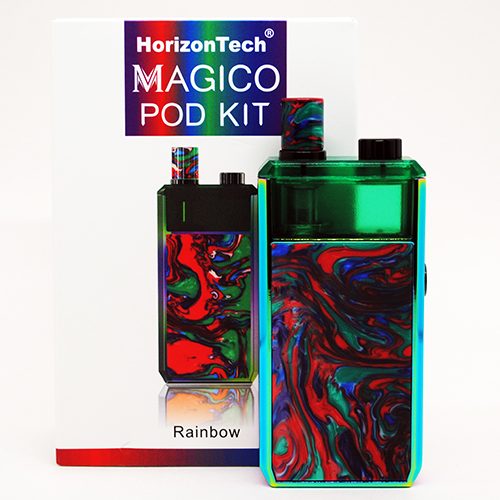 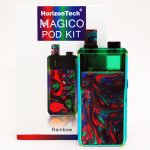 Today I’m going to be reviewing the HorizonTech Magico pod device. HorizonTech have already released a vape pen named the Magico that uses the same coils but this pod device has a few advantages.

First off, the Magico pod vape functions at a constant wattage output so the draw will remain consistent as the battery dies. The pods will hold a massive 6.5ml ejuice which is one of the largest capacities on a pod vape. It’s also got a large 1370mAh battery and an LED battery life indicator with three different colors.

It comes with two replaceable coils: a 0.12ohm coil made for DTL vaping and a 1.8ohm coil meant for MTL vaping. There’s an airflow control ring on the bottom of the pod for adjusting your airflow. The appearance of the Magico is also very nice as it’s got beautiful resin panels and an equally beautiful body design.

The look is gorgeous and the specs are impressive. I’m going to find out how well it vapes.

This tank was sent to me for review free of charge, from Vaporl. 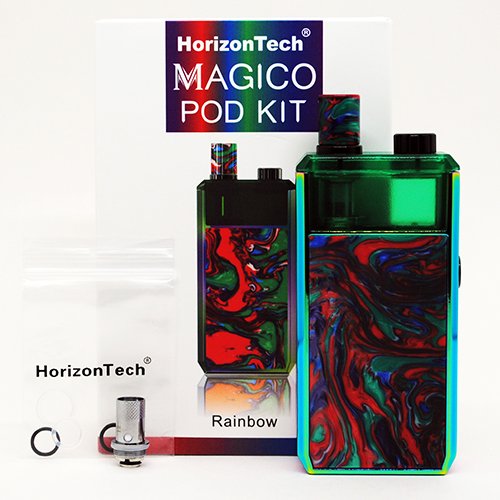 The Magico is hefty pod vape. It’s got a decent amount of weight to it when you hold it, probably due to the 1370mAh battery. It’s also thicker than most pod vapes at 19.6mm. The height and width are more average and comparable to the Lost Vape Orion Q in size. It feels good to hold and fits in your hand comfortably.

The body of the Magico is a shiny, finger-print attracting metal. I was sent the “Rainbow” colored device and it’s got a lot of pink, blue, green and yellow. I like it a lot. You can also get the Magico in blue, green, red, gold or black. The black color has a matte finish to the paint while the others are all shiny metal. The body is resistant to scratching and hasn’t gotten damaged from hanging around in my purse (and I have all sorts of things in there!).

Complimenting the body are gorgeous, real resin panels. They’re nice to the touch and made of very high quality resin. The pattern is eye-catching with swirls of red, green and blue mixing together.

The drip tip on the Magico matches the design of the resin. It’s a nice touch. The drip tip is a standard 510 and it pulls out of the top of the pod. You can replace it with another 510 if you like.

The fire button is the only button on the device. It’s a circular button surrounded by an LED ring that lights up whenever you take a draw. The color of the LED indicates your battery level. The button functions well but you have to depress it all the way in for it to fire. If you don’t put full pressure it will stop. I’ve had this happen a ton while I’ve been using it and it can get frustrating. 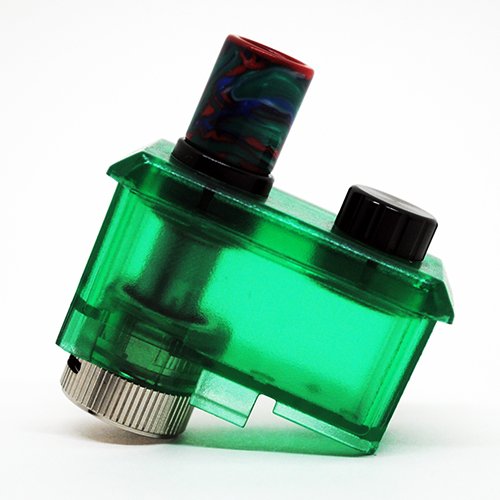 Wow, this pod is huge! It holds 6.5mls of eliquid which is about double the capacity of other pod vapes. You can fill this pod up and vape without having to refill for quite some time. Love it! A big pro for me here!

Depending on the color of the device you get the pod is tinted in different colors. The rainbow color that I received has a green tint to the pod. It looks a little funky but I like that it’s transparent. It’s easy to see how much ejuice is left in the pod without having to hold it up to the light. 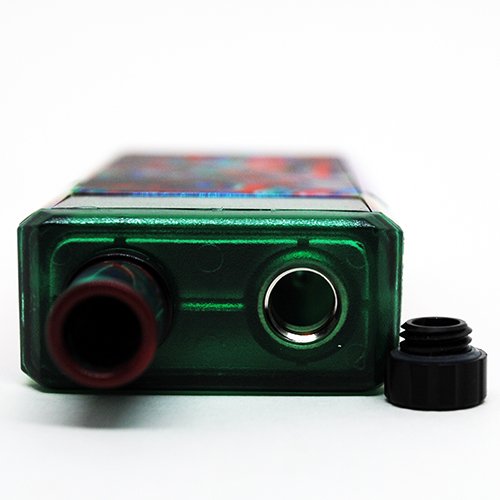 The pod attaches to the device on a track. It’ll only go in one way because of the airflow control ring on the bottom of the pod. It’s secured by a pair of clips and pressure fits into the device. It’s very secure once it’s in and doesn’t wiggle at all. Pulling it out of the device takes some force too.

The fill cap is on the top of the pod, opposite the drip tip. It’s secure when tightened but it unscrews very quickly because there’s very little threading. The fill hole is large so it’s a cinch to fill. Glass droppers fit completely.

You get two pods with the Magico. They use bamboo fibre for wicking material. They’re also the same coils that the Magico vape pen uses:

The 0.12ohm coil is a mesh coil meant for use with regular nicotine ejuices. It’s got a wide opening on the inside of the coil and this is better suited for DTL. The 1.8ohm coil is a regular round wire coil with a smaller airflow channel inside the coil. This makes it better suited to nicotine salts. However, you can adjust the airflow with the airflow control ring to either DTL or MTL so the 1.8ohm coil can still be used for DTL vaping if you want to use nics.

The airflow control ring on the Magico is very similar to the one found on the Eleaf Tance Max. It’s located on the bottom of the pod and can be adjusted for either DTL or MTL vaping. It’s a large circular ring with a ton of ways that you can set it.

For DTL vaping you turn the ring all the way counter-clockwise. This gives you two large airflow airflow slots that you can adjust to your liking. The draw with the slots open isn’t too airy and still  a slightly restricted DTL. With the slots half closed it’s a smooth, more restricted DTL vape.

MTL users will also like the airflow. Turning the airflow ring all the way clockwise reveals a single slot with 5 holes. You can close it all the way down to one hole if you want a very tight MTL.

I love that you can get a great hit with either DTL or MTL. I wouldn’t suggest MTL on the 0.12ohm coil because the vapor can get very hot. But you can definitely DTL the 1.8ohm coil if you’re using nic salts. The airflow versatility on this pod vape is awesome! 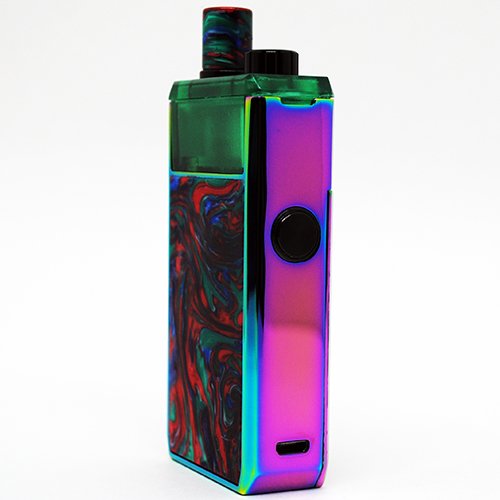 The Magico has a huge 1370mAh built-in battery and it needs it too because it functions on a constant power output. This means that the Magico will deliver consistent wattage even as the battery dies and this uses more battery life. The 0.12ohm coil will fire at a constant 25W while the 1.8ohm coil will output a constant 13W.

WIth the 0.12ohm coil I was getting just over a day and a half of heavy usage. This ended up being just about a full pod of ejuice. 6.5mls is a lot of ejuice to go through in a day but I was vaping heavily. A day and a half of usage isn’t bad but it’s not the best I’ve gotten from a pod vape either.

The 1.8ohm coil is much better on battery life and netted me over three days of use. Evidently, your battery life is going to depend on which coil you use as well as how much you use it. Overall, battery life on the Magico is pretty good.

There’s an LED ring around the firing button that lights up whenever you take a draw. The color of the LED lets you know how much battery life you have left. There are three colors:

Even when you get to the red LED you still have a solid amount of vaping time left. This gives you enough time to find a charger. Once the device is fully dead the LED will blink red 10 times and refuse to fire. 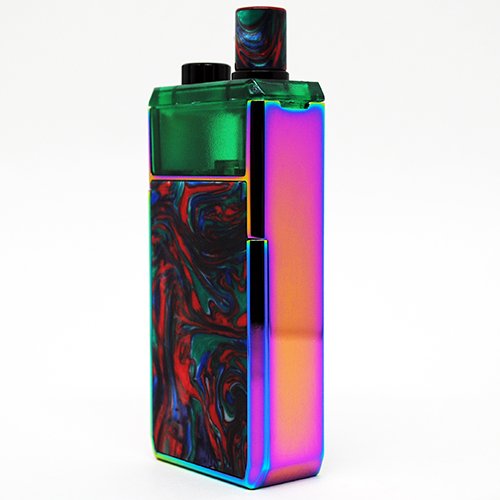 I started off testing the Magico using the 0.12ohm coil. I used Naked100’s Hawaiian POG, a 70vg/30pg ejuice, and it produced excellent flavor and surprisingly large clouds. The draw with the two airflow slots open is super satisfying. It’s a great DTL hit. It took around half of a pod before the flavor starting shining through but once it did, it was accurate and full.

The 1.8ohm coil is just as flavorful of a coil and that surprised me. I thought the 0.12ohm coil would surely be better but they’re both very enjoyable to vape on. I used 35mg nic salts at 70/30 with this coil and it wicked without an issue.

On the MTL 5 hole airflow this coil performs exceedingly well and offers a tight MTL that I really like. Even restricting the airflow down to one hole was a very nice vape. It’s a little warmer but not uncomfortably warm. If you like a very tight MTL then you’ll like this draw for sure.

I did have some leaking issues with this vape which is one of the only drawbacks. It didn’t happen often, but I sometimes had ejuice leaking from the airflow holes. It was never anything major but it’s worth noting. 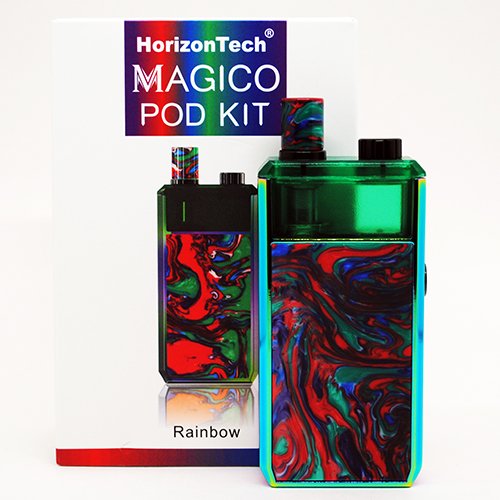 Not only does it look amazing but it performs amazing too. The flavor is top-notch whether using the 0.12ohm coil or the 1.8ohm coil and the airflow control ring allows you a DTL or MTL vape whenever you like. The 6.5ml pod capacity on the Magico is also great. You can fill it up without having to worry about refilling for much longer than with other pod vapes and this is a big plus in my books. I had some minor leaking issues but it was nothing too serious. Otherwise, there isn’t much to complain about. The Magico is a solid pod vape. It’s definitely one worth picking up.