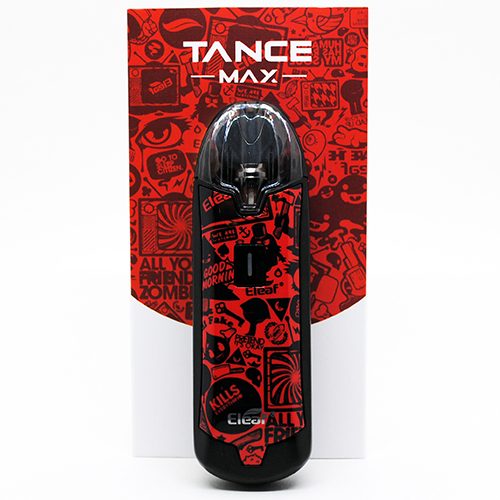 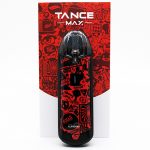 The Tance Max is a new pod vape from Eleaf and it’s unlike any of their previous releases. It comes in six fun and colorful designs, has a robust and comfortable form factor and comes with two different replaceable coils.  It’s marketed as a MTL vape and comes with an adjustable airflow ring to customize your draw. Plus, as an added bonus it uses USB-C charging for extremely quick recharge times.

The pod vape market is already saturated as it is. Is there room for another device? 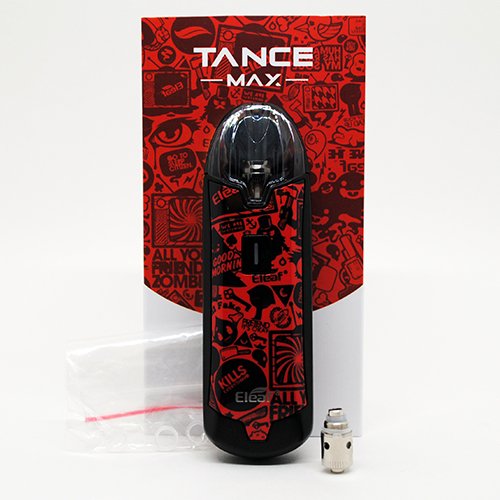 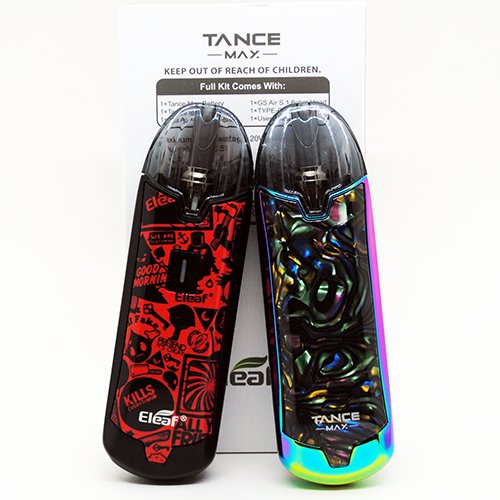 The Tance max has a nice size and shape. It’s 101mm tall, 31mm wide and 20.5mm thick which is average height for a pod vape but also a little bit chunkier. It weighs 87.5 grams which is on the heavy side, however it’s not too heavy by any means.

The size and shape make it comfortable to hold while the weight gives it a solid and well-built feel. It’s also easy to throw the Tance Max in a pocket or bag and this makes it easy to take it around for a day on the town.

The designs and color options are one of the best parts about the Tance Max. It comes in your plain white and black for those of you who are more reserved but it also comes in four out-of-this-world design patterns that are real attention grabbers. 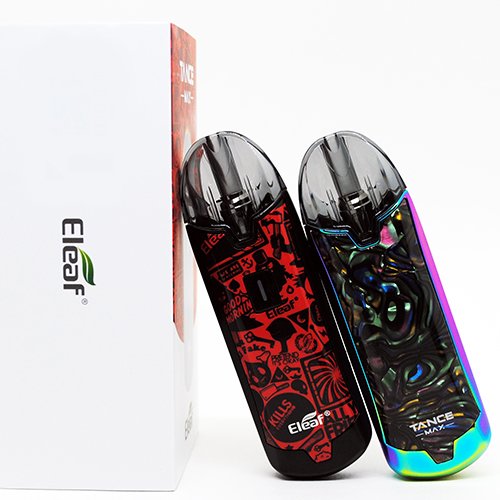 I received the Trick and Seashell patterns and they’re both very nice. Seashell is an opalescent pattern with an almost gemlike lustre while Trick is a mashup of icons and sayings. There’s also SeaBlue and a multi-color Geometry color available that are just as nice.

Unlike it’s little brother the Eleaf Tance, the Tance Max is button activated. The button makes a satisfying click when pressed and it takes just enough pressure to activate. I didn’t have any instances where it accidentally fired while in my pocket so I would say that they got the throw on this button just right.

The pod for the Tance Max holds 4ml; a massive amount of ejuice for a pod vape. It’s the same capacity as some sub-ohm tanks and that’s not something that you get very often with a pod. The mouthpiece is also nicely curved which I really like. It’s a comfortable and natural feel when you take a draw.

The pod is lightly tinted but it’s still easy enough to see the amount of ejuice inside of the pod. The pod attaches magnetically to the device and fits in snugly with no wiggling. The magnet attracts and holds the pod securely so that it won’t accidentally come detached from the device. For when you do want to remove the pod there are raised lines on the side of the pod for grip. 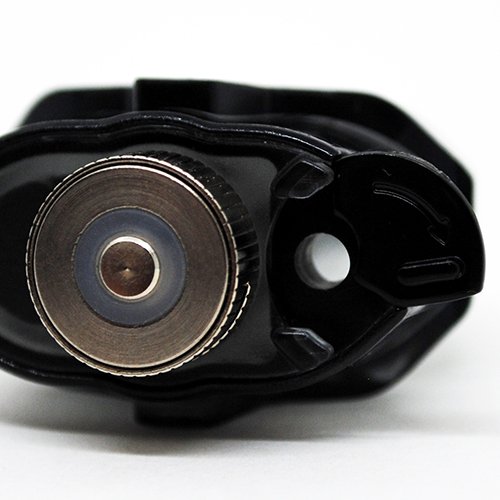 The pod is bottom filled and uses a rather intuitive and secure filling system. There’s a small door that swivels open 180 degrees to give you access to the fill port. It’s large enough to fit all bottle nozzles and even droppers, too. It got a little bit messy when I used droppers because some ejuice collected around the door. The ejuice can get underneath the door which makes it difficult to get it completely cleaned up. However, once the pod is filled and the door is closed, the door is extremely secure and doesn’t leak at all.

The two coils you get with the Tance Max are: 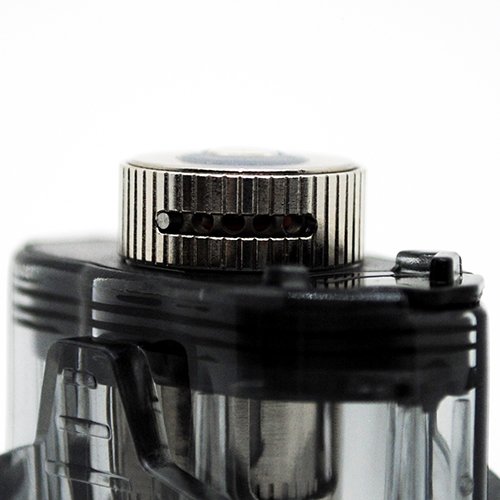 On the body of the Tance Max there are two large holes that direct airflow into the pod. These holes feed into the airflow control ring at the base of the pod. The AFC ring is fully adjustable for more or less restriction and it has four holes.

I enjoyed the Tance Max the most with two airflow holes open. This setting gives a good amount of restriction but the vapor is still warm rather than hot. It’s also much more flavorful than with the airflow fully open. There’s also an awful lot of vapor even with the airflow restricted down.

It’s refreshing to have airflow options in a market where you usually just get what you get with pod vapes. If you get a pod vape and you don’t like the airflow, you have to go searching for another device. Not with the Tance Max. The fully open airflow setting is something a DL vaper can appreciate while the more restricted airflow will certainly be liked by even the most picky MTL vaper. 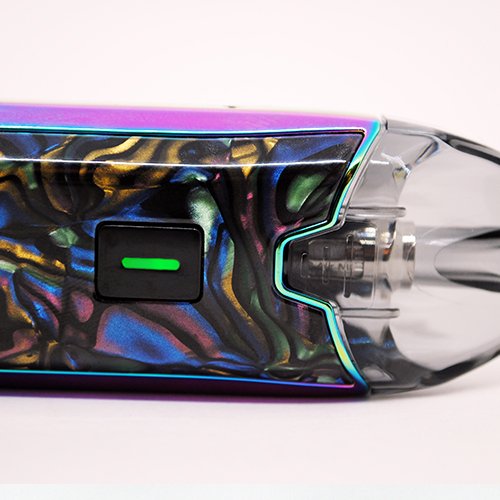 The Tance Max has a built-in 1100mAh battery. You get a lot of vaping time out of this battery thanks to the low wattage of the device and I’ve been very impressed by its longevity. I got a full day and a half of usage while using the 0.6ohm coil and almost three days of usage with the 1.6ohm coil! Absolutely nuts! If you vape a lot you’ve got nothing to worry about. Chain-vaping isn’t a problem at all with the Tance Max.

The firing button lights up to indicate the current battery charge level so you’ll always know where your battery is at. There are three colors:

In addition to great battery life the Tance Max uses USB-C charging for much faster charging times than with Micro-USB. My device recharged from dead in just under an hour. That’s extremely quick for an 1100mAh battery and this got me with more time to test rather than waiting for it to recharge. Impressive. 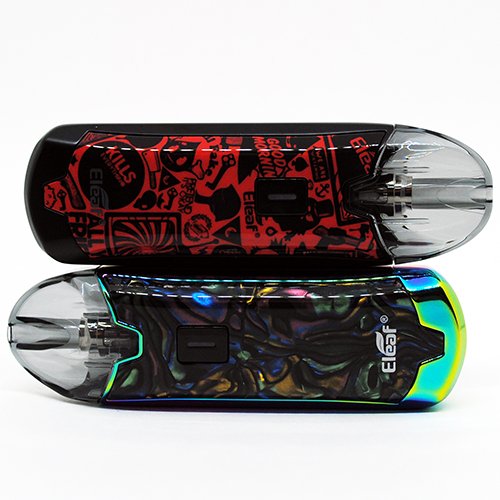 This device is impressive, especially because of my previous experience with Eleaf products. They’re very hit or miss and lately they’ve been missing more often than they hit. Now I wouldn’t call the Tance Max a home run but it’s definitely a massive step in the right direction.

I wasn’t too impressed the first time that I vaped on the Tance Max. I started off using the 0.6ohm mesh coil and the flavor just wasn’t coming through. I was also vaping with the airflow completely open which, I later learned, contributed to the lack of flavor. However, once I had gone through about a half pod (2ml) of ejuice and restricted the airflow down, it became a totally different vape.

Two airflow holes open is how I really enjoyed using the Tance Max. The vapor is warm, but not hot, and it’s a pleasant restricted MTL draw. The 0.6ohm mesh coil is accurate and flavorful and it produces an impressive amount of vapor for a pod device. I used Five Pawns GrandMaster and the banana and peanut butter flavors were front and center; no muting at all.

The 1.6ohm stainless steel coil is not as good as the mesh but it’s still decent. I also needed to restrict the airflow for the flavor to come through and that seems to be a pitfall of this device — you can get an airy MTL/restricted DL but it’s not going to produce the best flavor.

Both of the coils wicked well with 50/50 and 80/20 ejuices so they’re good with anything from thick to thin. I also had no gurgling or spitback with either coil. Plus, I used each coil for around a week and a half before the flavor started falling off. If I wasn’t being picky, I’m sure I could have continued to use them for at least another few days before having to switch them.

Lastly and perhaps most importantly, I had no leaking with this device from either the fill port or the mouthpiece. The fill port door is very secure and stays put once it’s closed. Leaking can be the downfall of even the best performing devices but it wasn’t a problem for the Tance Max. 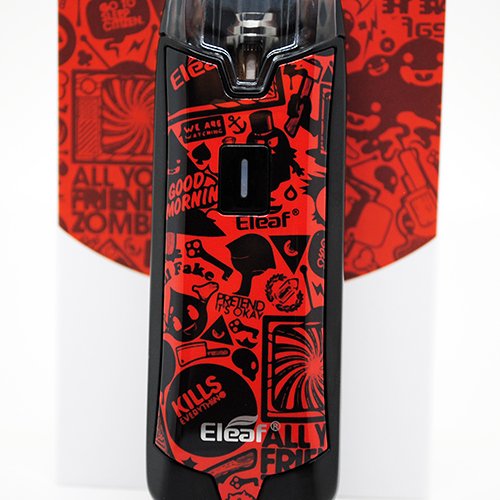 The Tance Max is a big step in the right direction for Eleaf. It’s ultra-portable, the build quality and battery life are amazing and the flavor with the mesh coil isn’t bad at all. Although you can achieve an airy MTL with the airflow fully open I would suggest restricting the airflow down for the best flavor. Both coils are decent, but the 1.6ohm SS coil does not perform as well as the mesh one.

Should you buy the Tance Max? If you’re looking for a first device or a backup vape then I would say yes. The battery life and quick charge times are reason enough to pick one up and it’s simple to use. It doesn’t leak either and that’s one less thing to worry about. The coils take a half pod to break in but once they do, the flavor is great. Personally, I think I’m going to continue to use this device whenever I’m not too busy reviewing.