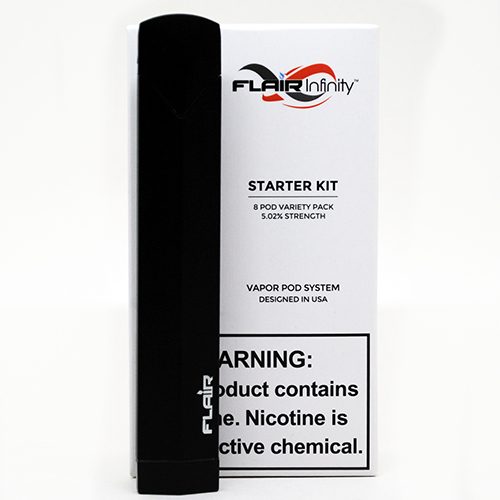 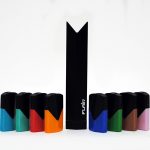 If you’re trying to quit smoking, closed pod systems are a convenient way to do it. The pre-filled pods make it easy to get into vaping and the devices require little to no maintenance. The Flair Infinity is one such device. You can get the device by itself or you can get the starter kit that comes with 8 different pod flavors. The Flair Infinity looks a lot like the JUUL and functions similarly as well.

It’s got an LED battery life indicator, uses pre-filled 1.0ml pods and there are a dozen flavors to choose from. The pods come with 50mg strength nicotine salts. Flair sent me the Infinity starter kit to try out and I’m going to give you my honest thoughts and opinions on this brand new device. 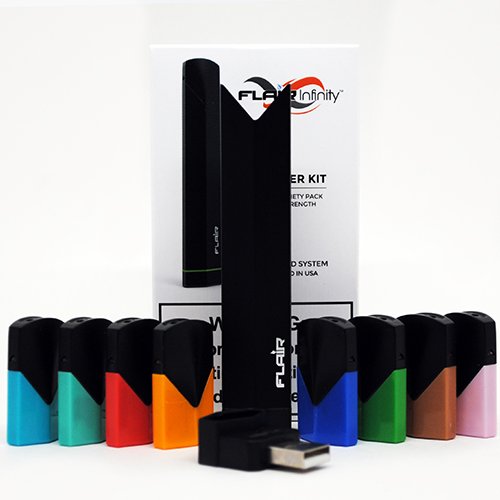 You can either purchase the Flair Infinity device by itself or as part of a starter kit. The start kit that I’m reviewing comes with 8 different pod flavors and seems like an easy way to get into vaping.

The Flair Infinity is a simple but nice looking pod vape. It truly looks a lot like the JUUL. It’s a bit taller than your average pod vape at 115mm and a bit thicker too with its 20mm width. It’s still nice to hold though and doesn’t feel very big at all when you’re using it. It’s currently available in either black or grey.

I can’t find what it’s made of on the Flair website but I think it must be made of plastic; it only weighs 21 grams. It’s a really light device. I barely notice when I have it in my pocket which makes it a good device to take around when you’re leaving your bag/purse at home.

In any case, it’s a durable little guy. I’ve used it for around two weeks and it still doesn’t have any dings or scratch marks. I’ve also dropped it a few times from standing height (I’m only 5’4” so it wasn’t from that high up) and it’s survived just fine. The paint doesn’t hold fingerprints either — something that I like a lot.

The overall design of the Flair Infinity is nice. It’s got a single design line that runs down the center of the device. There’s also a little “Flair” logo in silver. Otherwise the device is bare and has a super clean look to it. I’ll say it again: it looks a lot like the JUUL!

The Flair Infinity is also super comfortable to vape on. The pods (which function as the mouthpiece) have a curve to them that sits nicely on your lips. It’s also easy to hold the device in your mouth because of the light weight of the device.

It’s a draw activated vape so you just have to pull on the pod to start vaping. There are no buttons to press. Because of its simplicity, I can already see this device being attractive to new vapers. 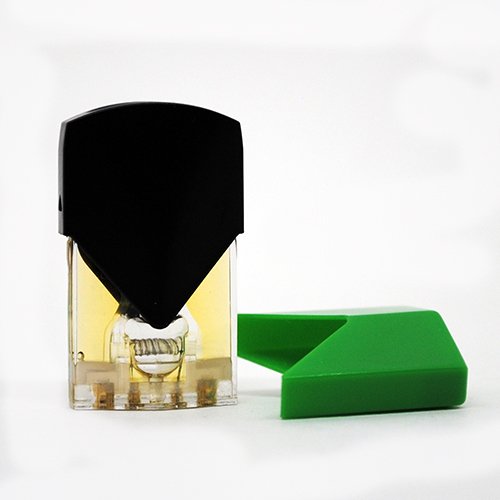 The Pods for the Flair Infinity come pre-filled with 1.0ml of nicotine salt ejuice. They only come in 50mg strengths though and that’s a bit of a con. Personally, I’m fine with vaping on 50mg nic salts but I know some people that would get nic’d up too quickly. For this reason, I’d like to see them sell 30mg pods in the future. I think this would open up the device to more people rather than just heavy smokers/vapers.

The pods attach magnetically to the Flair Infinity but the magnet is a little weak. I haven’t had them fall out of the device or anything but they still come out pretty easily. The pod also wiggles a bit when seated and doesn’t have a very tight fit. I don’t think they’re going to come out accidentally but I still think that they should be more tight-fitting nonetheless. The pods also only go in one way.

Big pro for the pods: they’re transparent. The mouthpiece portion of the pods are an opaque black but pulling them out lets you clearly see how much eliquid is left. You can also see the tiny little coil and cotton sitting in the center of the pod.

The starter kit that I got came with 8 different flavors: peach, blueberry, melon breeze, strawberry, virginia tobacco, blue mint, cool mint and classic menthol. They’ve also got four more flavors listed on their website that look pretty good: pink lemonade, cotton candy, mighty mango and cherry. If I had a choice for flavors, I would have picked all of the fruit/candy pods and left out the tobacco and menthol. Here are my thoughts on the flavors: 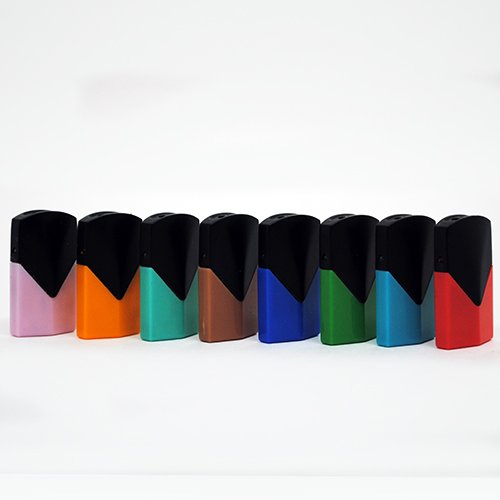 Peach: Even though I can handle 50mg nic salts, this one almost got me too nic’d up! It’s just so good! I kept taking puff after puff because it truly tastes like sweet peaches. There aren’t too many peach flavors around and this flavor got me questioning why. Love it!

Blueberry: This is a nice flavor but the blueberry is a little more subtle than I would have preferred. If the blueberry was only a bit stronger it would be perfect. Still tastes great though and you can certainly taste the blueberry flavor.

Melon Breeze: The site description says watermelon but to me it also tastes like honeydew. There’s a light menthol in this flavor too and it really rounds it out. This is another pod that I almost got nic sick from. It’s very delicious.

Strawberry: Another great flavor. It seems like they’ve really got the fruit flavors down! This is a good strawberry because it tastes really natural and not artificial in the least. It’s also just the right level of sweetness.

Virginia Tobacco: This is a good tasting tobacco flavor. It’s smooth and isn’t too harsh. No tobacco flavor is perfect (mainly because it’s nearly impossible to replicate the many flavors in a real cigarette) but this one is certainly one of the better tobacco flavors that I’ve tried.

Blue Mint: I’m no “mint expert” here so you’ll have to forgive me. I’ll describe these the best that I can though. This one is minty but it’s also a little sweet. It got a refreshing taste and it’s very smooth. Non-mint lovers might still enjoy this flavor because of the sweetness.

Cool Mint: Cool Mint is a lot mintier than the Blue Mint. I think it’s spearmint flavored. It blasts your mouth with coolness straight away and is more suited for real menthol lovers. This one will wake you up in the morning!

Classic Menthol: Similar to the Blue Mint, Classic Menthol has a touch of sweetness to it. It’s also not not-your-socks-off minty but it’s still got a cooling effect on the mouth. It’s got a less cool flavor than I would expect from the name but I found it very enjoyable to vape.

The pods come with color coded caps on them to let you know which is which. I like the caps because you can safely store away pods that you’re not using and/or easily take them with you. Cool idea.

The Flair Infinity packs a built-in 240mAh battery. For those of you comparing, that’s slightly larger than the JUUL’s 200mAh battery. There’s an LED indicator near the bottom of the Infinity that lights up when you puff and indicates your current battery charge. There are three colors:

One downside to this device is battery life. If you use this device heavily like I did then you’re going to have to recharge it every night. 240mAh isn’t that large, especially if you’re using it as your main device. By the time I finished the work day I was always in the 50-20% range. By the night time I was always in the red. If you don’t recharge this device every night you’re going to have it die on you early the next day.

The Flair Infinity uses a proprietary charger that is a bit like a docking station. The charger plugs into a USB port and then the device sits in the charger. Because of the small battery it charges pretty quickly though. It takes just around 30-40mins to recharge — an upside to the short battery life. 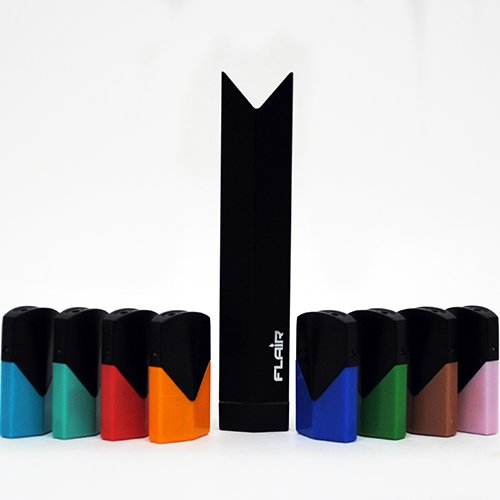 If you like a tight MTL draw then the Flair Infinity will hit the spot. Each of the pods have a small hole on the sides for airflow and this gives a fantastic, tight mouth-to-lung vape. It’s a lot like smoking a cigarette. The vapor is warm and smooth and the amount of clouds it produces is surprising too.

Pulling on it feels natural. The draw activation works like it’s supposed to and activates straight away. It’s worked every single time and has never messed up on me so it looks like they got the threshold just right.

The throat hit from the pods is also awesome. They give a satisfying kick that isn’t too heavy on the throat. You can take a longer draw for a more pronounced and aggressive throat hit or a shorter draw to reduce the throat hit.

One thing I noticed though was that the pods kept crackling for a second or two after I stopped drawing. It almost sounded like the device was still firing. But after some testing it seems like the coil just takes a second or two to cool down and that’s what makes the crackling/sizzling noise. It’s a lot more noticeable on longer draws.

On the other hand, the pods wick well and perform beautifully when chain vaping. Taking longer draws doesn’t affect them and I never once had a dry hit or anything close. Chain vapers, you can rest easy. 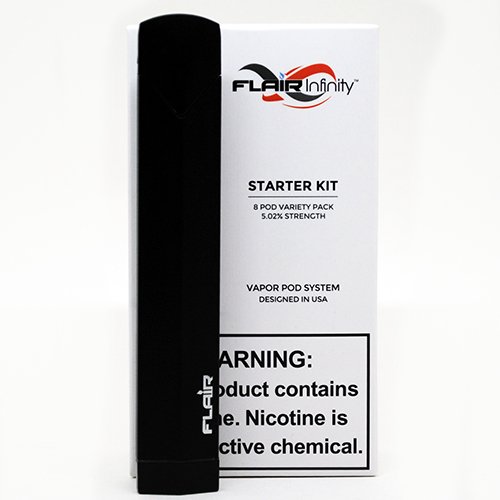 I can 100% see this device being used by beginners trying to get into vaping. The pre-filled pods make it simple and easy to use without having to worry about anything else. You can buy the starter kit, pop the pod out of the pack and into the Infinity, and you’re all set and ready to vape.

The flavors are very enticing too. I didn’t get to try out their four other fruit flavors but I can imagine that they’re just as good as the ones that come in the starter kit. Flavors are what keep people vaping instead of smoking so it’s great to have a dozen options to choose from.

The battery life and proprietary charger are the only real downsides to the Infinity. It will last you the day but you’ll have to remember to recharge it at night. Overall, the positives outweigh the negatives though so I think that it’s a great device to pick up if you’re a beginner vaper.

What are your thoughts on the Flair Infinity? Have you got one? Leave me a comment and let me know!