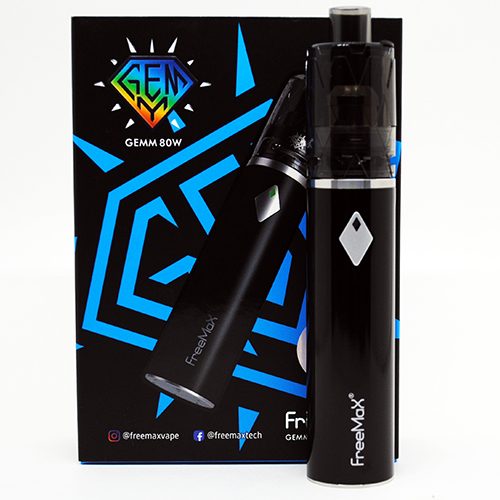 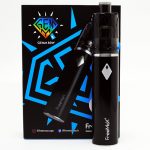 After the enormous success of the Twister, FreeMax are back with another vape pen: the Freemax GEMM. It’s got a bigger built-in battery than the Twister’s at 2900mAh and has three different wattage levels.

The Freemax GEMM kit comes with two disposable sub-ohm tanks. Each tank has a different coil and uses tea fiber cotton as wicking material which is supposed to provide better flavor and wicking capabilities. Is this a kit worth picking up? I reviewed it to find out.

This kit was sent to me directly from Freemax for the purpose of this review. 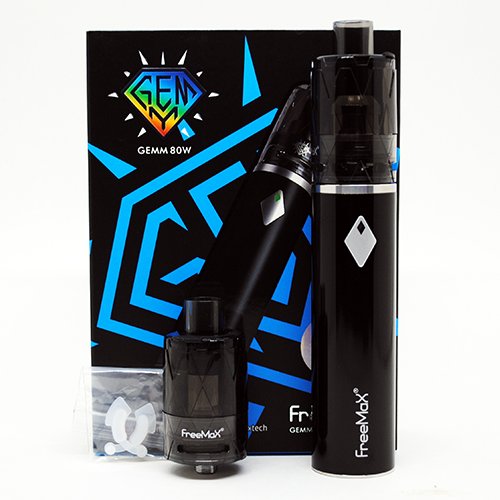 The FreeMax GEMM is a normal and standard looking tube mod. Sadly, there are no crazy graffiti designs like the Freemax Twister. I got the black GEMM mod and it’s got stainless steel accents for the 510 plate, firing button, logos and bottom of the mod. It’s reserved in appearance but nice nonetheless.

With the GEMM tank attached the entire kit is 131.65mm tall. Without the tank it’s 80.3mm tall. It’s got some weight to it when you hold but I wouldn’t call it heavy. It’s just heavy enough to feel solid in your hand.

Build quality is another plus. The button is firm, doesn’t rattle around and produces a satisfying click when pressed.  There are also venting holes on the bottom of the mod — something that I always like to see.

For a tank that you throw in the trash when it’s done, the GEMM tanks are actually really nice. They’re made primarily out of plastic but they have an attractive design that actually looks kind of high-end.

They’re well-built too. The tanks are well assembled and don’t feel like they’ll fall apart. They’re also quite durable and have been able to withstand a few mild drops without cracking or breaking.

You can get the GEMM tank in a few different colors: clear, green, purple, blue, or black. I got the black and clear colors for testing but the purple, green and blue look really cool too. It’s nice to have color options.

There’s a silicone gasket on the top of the tanks that pulls open to reveal the fill port. It’s a little narrow but it will still fit the tip of your dropper. Pointy tip bottles aren’t an issue.

These tanks use coils with identical resistances and ratings as the coils for the Fireluke 2 tank.  The tanks look identical to each other in appearance but the larger coils in the G2 and G3 tanks mean that they’ll hold slightly less ejuice. The G1 tank will hold up to 5ml of ejuice while the G2, G3 and G4 tanks will hold 4ml.

These tanks worked best on the GEMM mod at the medium (yellow) setting which is 60W. They pair perfectly with the GEMM mod but I also tried using them on other mods just to see how they would perform. 60W seemed to be the sweet spot as well. 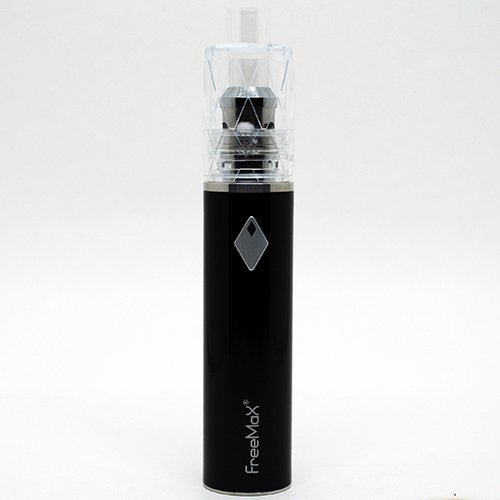 This is a straightforward and simple mod to use. There are very few functions to be aware of.

There are three power levels on the GEMM:

When you switch power modes the LED indicator will light up in the corresponding color. These aren’t set wattage levels though. Instead, the wattage output for each mode depends on which tank you’re using. This is the chart from the FreeMax website: 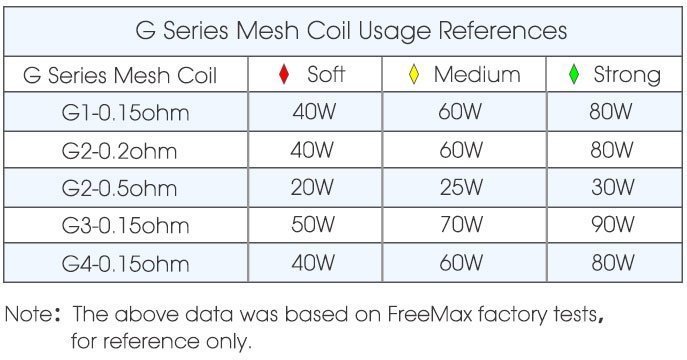 For both of the tanks included in the kit the wattage outputs are the same at each power level. Soft is 40W, medium is 60W, high is 80W. The chart is a bit confusing though. The G1 and G3 tanks both use a 0.15ohm coil, yet the GEMM fires at different wattages. I’m not sure why this is the case as there really isn’t any additional info on the Freemax website. This also makes me unsure about using tanks other than the GEMM disposables with the GEMM mod.

The GEMM packs a 2900mAh battery; a bit larger than the Freemax Twister’s 2300mAh size. The same LED that lets you know your wattage output also lets you know your battery charge level. Whenever you press the fire button the LED will light up in one of three colors:

I got through an average of about three full tanks before I had to recharge the mod. Respectable battery life. On the other hand, charge times are way too long. It takes over three hours to recharge the GEMM when it’s completely dead! If this is your only mod and it dies, you’re going to find yourself without a vape for hours at a time. 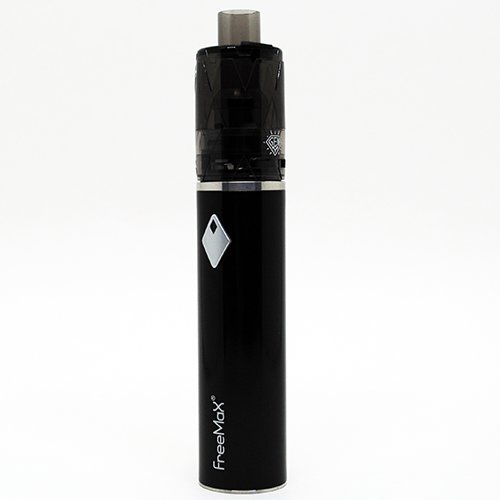 The Freemax GEMM mod fires nearly instantly when you press the fire button. It works well with the G1, G2 and G3 tanks on the medium (yellow) power level but the other power levels aren’t very useful. Soft (red) was too light of a draw while high (green) was too hot and powerful of a draw. Medium was just right for all three tanks. The vapor is warm but not too hot. It is a direct output device though so the draw will get weaker as the battery dies.

The flavor is crisp and really pops — it’s surprisingly good flavor for a disposable tank. I was blowing large and fluffy clouds too. I didn’t expect this level of flavor and clouds from these tanks, that’s for sure. Plus, even after multiple refills with each tank they still haven’t shown any sign of slowing down or losing flavor.

If I had to pick a favorite between the three tanks, I would pick the G3. Because even though all three tanks have very similar performance, the G3 triple mesh coil seemed to deliver just slightly better flavor than the G1 and G2.

The tea fiber wicks aren’t anything special but they do seem to wick faster and better than just organic cotton alone. With that being said, chain vaping isn’t a problem. These tanks wick fast and handled draw after draw without giving me a dry hit.

One downside is that the G2 and G3 tanks use a lot of ejuice. If you’re vaping heavily like I was you’re going to be refilling at least once, maybe twice per day. At 4ml of ejuice per tank, that’s a lot of ejuice.

The airflow for all three tanks was best around half way closed. It’s a relatively silent draw that Isn’t turbulent at all. These tanks are very smooth and enjoyable to vape on.

Using the GEMM mod with tanks other than the GEMM disposables is a different story. I used my Eleaf Rotor with a 0.20ohm coil and the results were underwhelming. At the “high” power level it just didn’t feel like a strong enough wattage. I also tried it the HorizonTech Falcon with the 0.15ohm coil and it was the same story. For some reason this mod just doesn’t deliver enough power when using other tanks. 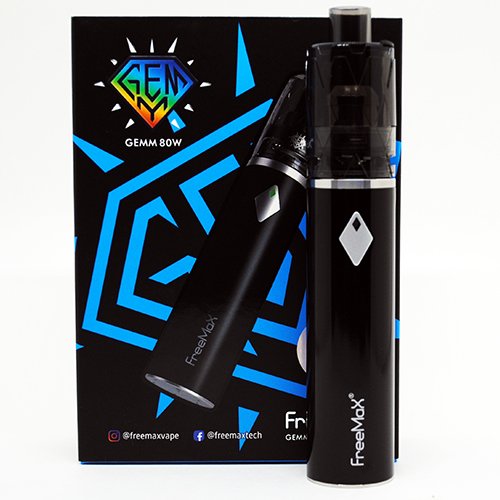 The Freemax GEMM is a good kit as a whole. The GEMM disposable tanks are surprisingly flavorful and the tea fibre cotton certainly wicks well. The different tanks aren’t too different from one another and perform quite similarly.

The only downside to the GEMM mod is that the wattage adjustment levels are a bit of a mystery; I’m uncertain why different coils with the same resistance fire at different wattages. This makes it confusing to use with other tanks. The GEMM mod just doesn’t output enough power for anything other than the GEMM tanks so I can’t recommend it outside of the kit.

If you’re looking for a new kit and like the idea of disposable tanks then the GEMM kit is a good buy. It’s not too expensive from places like EightVape either.

Let me know what you think about the GEMM kit.