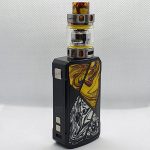 One of two new mod and tank kits released by Freemax, the Maxus 200W kit features a dual 18650 mod with a few tricks up its sleeve and the new M Pro 2 tank. This tank is the successor of the M Pro tank, which is very highly regarded and makes many top sub ohm tank lists. Let’s see how well this kit performs.

This kit was sent to me by Freemax for the purpose of this review. 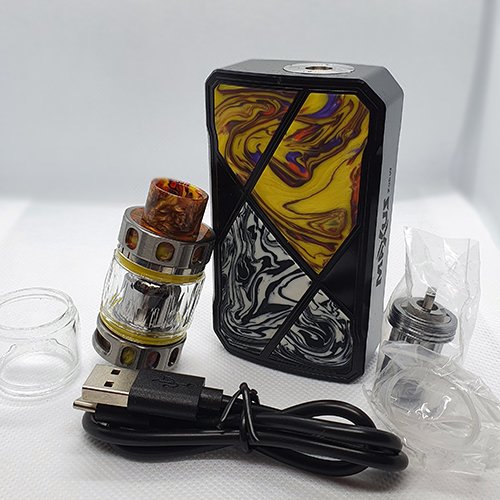 The Maxus 200W mod is not a small mod, but it fits nicely in your hand and feels comfortable to hold. It is almost box-like in shape but also has subtle curves which contrast with the straight lines. The corners are not rounded off, but are more cut off. These are not sharp corners, however, as they are very smoothly rounded off without breaking the lines of the design.

The size is 90mm x 52.4mm x 29mm and it weighs 190g by itself and 260g with the M Pro 2 tank attached. I feel it’s a nice solid weight, giving the whole kit a quality feel, without being too heavy to handle.

The kit is available in six different colour schemes: green-red, red-blue, blue-yellow, black-orange, yellow-black and orange-green. I received the yellow-black colored kit for this review. It should be noted that the colour you choose is actually the resign design on the mod and tank, with the actual color of the mod always being black and the color of the tank being stainless steel.

The battery panel is held in place by two strong magnets; one at the top, one at the bottom. It is easy enough to remove the panel using the little notch on the bottom of the panel, but the magnets are really strong. When replacing the panel it is literally sucked out of your hand before you’ve put it in place, so there are no worries about it coming off accidentally. There is a very small amount of wiggle to the battery panel when it’s in place. It must only be a fraction of a millimetre, but it is there.

The resin panels aren’t actually resin, they have a soft, matte finish which feels lovely to touch and also helps with grip when holding the device. Both the battery door panel and the other side of the device are slightly curved, which again ties in with the design of bold straight lines and subtle curves, and also makes the device more comfortable to hold than if these panels were flat.

On the top of the device is a stainless steel 510 plate with a spring loaded connection. It isn’t centered, but I actually prefer my tank to be offset away from the fire button like it is on this mod.

The 510 plate is slightly raised from the device to prevent tanks from scratching the finish on the mod. The M Pro 2 tank actually has a little lip which sits over the edge of the plate and prevents a gap. However, if you use a different tank without this lip, you will have a slight gap between the tank and mod. I get the thinking behind this, but also think if you have a gap between the tank and mod it is prone to collect dust etc from your pockets which could also scratch the finish of the mod when removing the tank.

The screen is a simple black and white affair. It’s bright and clear, even outside in direct sunlight.

There is a fire button positioned above the screen and two adjustment buttons below the screen. The buttons are square shaped, stainless steel, and are well made. They click nicely when pressed and are responsive.

Below the adjustment buttons is the USB C port. Although batteries should be charged externally, it’s nice to see USB C used. I just feel the connection ports are stronger than micro USB and will last longer.

The Maxus 200W takes two 18650 batteries but very interestingly it will also work with just one! Even more interesting is that you can load the batteries either way up in the mod.

Freemax calls this ‘SmartLoad’ and it does give you some interesting options. Obviously vaping at high wattages you’re going to want to be using two batteries, otherwise you’ll just drain that single cell in no time. But if you stick a MTL tank on it which you vape at low wattages, you will be able to get away with one battery.

Personally I’d rather just stick two cells in for the extra battery life, but the option is there for you with this device.

The batteries fit into the battery compartment snugly and there’s no movement of the cells once they are in. There is also a ribbon which makes it easy to remove your batteries.

The device also has what Freemax calls ‘Smart Coil Detection’. If you install a tank with a TC coil it will suggest TC mode if not already in TC mode. It works vice-versa also for Power mode.

The menu system is simply to use. To access it you press the fire button three times. This brings up the option of MODE, SET, INFO & EXIT.

MODE is where you choose your firing mode. As mentioned you can choose from Power, VPC, Bypass, TC (Ti, SS, Ni) and TCR.

Overall, the Maxus 200W is a full featured and flawlessly functioning mod, with a simple to use menu. There’s nothing too complicated that a beginner couldn’t cope with, but it’s got everything a more experienced vaper would need also.

The M Pro 2 tank is constructed from resin and stainless steel. The original M Pro was available in either resin or steel, with the resin model obviously being fragile and susceptible to breaking if dropped accidentally.

This hybrid design should hopefully alleviate some of that fragility as the resin on the top cap and bottom airflow control ring are encased in a chunky stainless steel ring, with cut outs to see the resin beneath. It gives the tank a sturdy look, which at first I wasn’t a big fan of. It has grown on me over my testing period, but may not be for everyone.

The glass that comes pre-installed on the tank has a cut glass pattern, if I’m honest that had to go straight away. Once I swapped it for the plain glass included in the box, that’s when I started to appreciate the tanks looks a bit more. Both these glass tank sections hold 5ml of juice, so it’s just a matter of personal preference.

The top cap has a push and slide mechanism to access the juice fill port. There is a little red dot which indicates where you push and it’s sturdy and slides very smoothly, clicking back into place nicely when closed. Freemax say they implemented 3 steel balls in the sliding top cap mechanism, which increases friction and reduces accidental opening of the top cap. It is still easy enough to open with one hand, and during my testing I’ve had zero leaks or issues with it.

The drip tip is an 810 with dual o-rings and the drip tip hole also has an o-ring in it, so you should be able to use any 810 drip tip with the tank if you want to.

The airflow control ring is nice and smooth when adjusting. It also has a stopper at fully closed and fully opened, which prevents the air flow ring free spinning. Although smooth, the ring won’t move by itself, it has a nice restriction to its movement.

The M2 0.2ohm coil was pre-installed, so I used that one first for testing. The juice I used for testing is an 80VG blue slush flavor. I filled the tank and left it to absorb into the coil for a few minutes. I am always over cautious with a new coil, giving it at least 10 minutes just in case.

I started on the lower end of the recommended wattage, 60 watts. Flavor is ok and warmth is there. Upping to 70 watts and the flavor really comes through and a nice warmth. 80 watts is still a nice warmth and more flavor again. 90 watts gives more flavor again and the warmth is too hot for me. I’m not going higher for risk of burning the coil, but it wicks the 80VG fine in the recommended ranges. The flavor on this tank is the best I’ve experienced from a sub ohm tank.

This coil hits hard. I vape 7mg juice in sub ohm tanks as 6mg doesn’t do it for me, but 7mg is too much in this tank! I get a nicotine head rush, like the first cigarette of the day when I used to smoke.

I found the M1 coil to have slightly less flavor than the M2, but it still gave a very nice flavor. I found 70W on this coil to be my sweet spot, but it depends on how hot you like vape.

I also tested the coils in TC mode, with them being stainless steel. I did try it in TC-SS mode and although I knew the value would be for SS316L in TC-SS mode, it vaped beautifully. I had it set to 400F and the temperature felt consistent on long pulls, with no dry hits at all. I also tried it in TCR mode inputting a value of 85 after a bit of googling. This was a hotter vape, so bringing it down to 350F I found my preferred temperature.

The coil life is really good on both coils. I’ve used about 30mls of liquid on each and there has been no deterioration in vape quality yet.

I have found both coils really drink the liquid, but it’s a trade off really for the amount of flavor you get from the tank.

Battery life I have found to be on par with other 18650 devices, I have to swap the batteries out for fresh ones each day when vaping at my preferred wattage of 70W.

I have thoroughly enjoyed the Maxus 200W kit. The mod itself is a great performer in both wattage mode and TC mode. There’s also the option of only using one battery if you want. Overall a solid mod. However, the M Pro 2 tank for me is the main star. It gives the best flavor of any sub ohm tank I’ve ever used. It drinks the juice, but this is a trade off for the amount of flavor you get from the tank.

I cannot find fault with the tank or coils and the only negative I found on the mod was the very small amount of movement on the battery panel. It’s a very minor gripe, but it’s the only one I can find.

Freemax have really hit the spot with this kit, and I cannot recommend it highly enough.