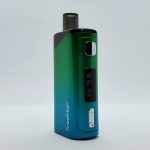 According to Freemax, the Autopod50 is the world’s first double mesh coil pod mod kit. It uses Freemax’s latest FM COILTECH 4.0 coils which are made with military-grade SS904L mesh and tea fiber cotton.

These coils are similar to the ones just released with the Fireluke 3 and M Pro 2 tanks and are supposed to last for 30-40 refills. With these big beefy sub-ohm coils, the Autopod50 has the potential to be a truly flavorful, DTL pod device.

The Autopod50 has a nice form factor, variable wattage up to 50W, and a 2000mAh battery. It also has adjustable airflow. The pod will hold 4ml of ejuice and takes replaceable coils. I’ve been using the Autopod50 for about two weeks now and it’s held up well during my testing. But is the Autopod worth the purchase? Read this full review for the answer!

The Autopod50 was sent to me by Freemax for the purpose of this review. 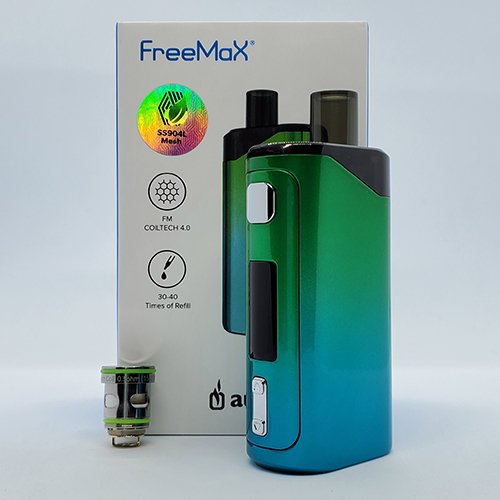 The Autopod50 is a mid-sized pod vape. It’s not as small as something like the Vaporesso Osmall or Freemax Maxpod but it’s still pretty portable. It is heavy for a pod vape though at 151.5g and I definitely feel it when I slip it into my sweater pocket.

The rounded design fits nicely in my hand and is comfortable to hold. It’s almost oval shaped, with long flat sides and a rounded front/back. I can’t quite palm the Autopod50 but it curves and fits perfectly in my palm when I try to.

The Autopod50 comes in six colors. Three are solid and the other three have a two-tone fading paint. My review unit is the Green-Blue fade and the paint is very nice. It has a metallic/pearlescent finish that looks great. The paint has held up well too and hasn’t chipped, scratched or faded. It’s a bit of a fingerprint magnet but if you use the silicone case this won’t be an issue.

The small OLED display is black and white. It’s clear and bright even when I’m outdoors in the sun. The buttons have a chrome finish that holds fingerprints but they’re nice buttons overall. They’re firm but responsive and make an audible click when pressed.

The pod magnetically attaches to the battery and sits securely in place. There’s absolutely no wiggle at all when the pod is seated. Even shaking the device around doesn’t move the pod.

All-in-all, top notch design and build quality on the Autopod50. I can’t say that I expected any less from Freemax.

The drip tip on the Autopod50 is built into the pod and non-removable. The drip tip is much smaller than an 810 but the bore is almost the same. It’s not my favorite drip tip but there’s nothing actually wrong with it. It’s fine to draw on and comfortable enough that I don’t mind it.

The pod is very darkly tinted so it has to be held up to the light in order to check the ejuice. This pod has a 4ml eliquid capacity and is filled through a port on the underside of the pod.

The rubber stopper does its job of keeping ejuice inside the pod but the point where it attaches to the pod is quite thin. This makes me concerned about its long-term durability. I made it a point to be extra gentle whenever I removed the rubber stopper and you should too.

The fill port is just wide enough for thick, pointy tip nozzles but I would have liked it to be wider. If it was any more narrow it would be a real struggle to fill with anything other than a needle nose bottle.

The Autopod50 uses FM COILTECH 4.0 coils. These are similar to the coils released for the M Pro 2 and Fireluke 3 but they’re not cross-compatible. The Autopod50 coils are just slightly smaller but for a pod system, these are some of the biggest and beefiest that I’ve seen. Freemax claims that these coils should last for 30-40 refills which is absolutely nuts! Talk about coil life!

These coils screw into a coil base and then screw into the bottom of the pod. This coil base has dual-slot adjustable airflow control. There’s knurling around the coil base to make adjusting the airflow easier. The AFC ring turns smoothly and with little effort but has enough resistance to stay wherever it’s set.

How to Use the Autopod50 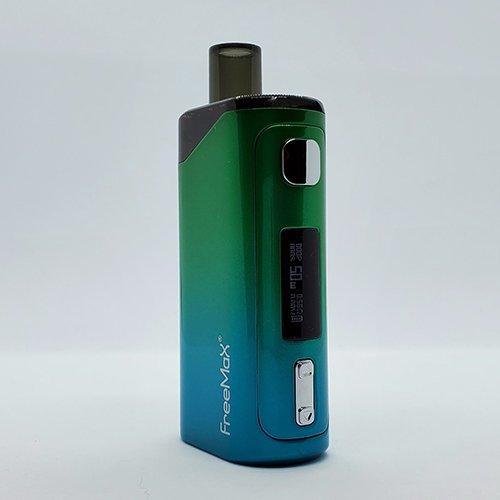 The Autpod50 has a maximum wattage output of 50W and works by button-activated firing. Getting it set up to vape with is easy and straightforward. When you first take it out of the box, the 0.25ohm coil will be preinstalled in the pod. There’s a little sticker on the bottom of the coil that has to be removed before use so remove the pod and take that off.

Remove the rubber plug from the underside of the pod and fill it up with your favorite ejuice. I would suggest only using regular nicotine ejuices with the 0.25ohm coil and regular nicotine ejuices or low strength nicotine salts with the 0.5ohm coil. When you’re done filling, replace the rubber bung and make sure it’s securely in place. Wait 5-10 minutes for the coil to become saturated before moving on to the next step.

Turn on the Autopod50 by clicking the fire button five times. Set the airflow control to fully open and insert the pod into the battery. You’ll want to start off with a low wattage and work your way up higher as you vape, until you find the wattage that you like. You can remove the pod and adjust the airflow as you go, too.

For the 0.25ohm coil you should start at 30W and work up in 5W increments using the adjustment buttons. Freemax states that this coil is best at 40W and can go as high as 50W, but I found it best at 37W. Of course, the best wattage will depend on your preference.

With the 0.5ohm coil you should start at 15W and, again, work up in 5W increments using the adjustment buttons. This coil is best at 30W but can go as high as 35W. 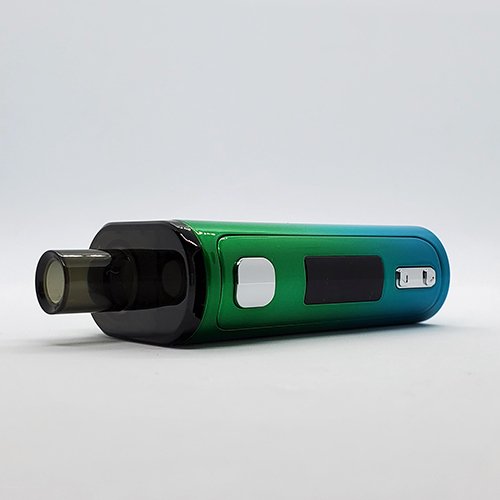 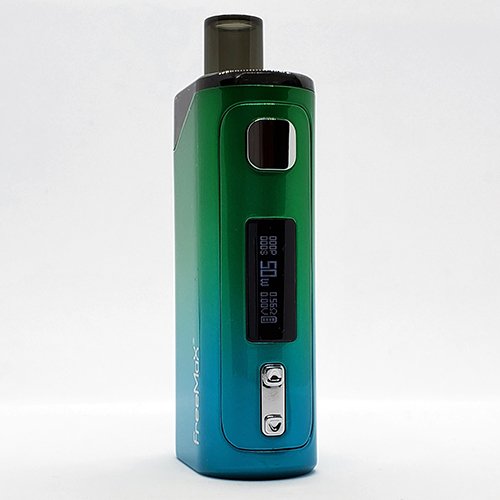 The Autopod50 packs a built-in 2000mAh battery and recharges using Type-C charging. I’ve been using this device for just around two weeks now and the battery life is impressive. I was getting such long usage out of it that I was almost sure I had charged it and just didn’t remember!

I vaped over 250 puffs at 30W with the 0.5ohm coil. That’s crazy vaping time from a single charge and surprised me the first time I went to charge it. Subsequent vaping all come out to around the same amount of puffs, somewhere around 250+.

The 0.25ohm coil gave slightly less battery life but I still got a lot of vaping out of a single charge. I vaped around 150 puffs at 37W which is not bad at all but pretty average for a pod device, especially one with a 2000mAh battery.

Using the Type-C charging cable that came in the box, the Autopod50 charged back to full in around an hour and a half. I expected quicker charge times as an hour and a half for a full charge is a bit lengthy. But on the other hand, it does charge to 50% in half an hour. So if you’re crunched for charging time, it will charge enough to get you through a few hours of vaping until you can full charge it.

The Autopod50 comes with two coils:

These coils are huge for a pod device and only slightly smaller than the coils for the M Pro 2 and Fireluke 3. These are both double mesh coils with large wicking ports to effectively absorb ejuice.

The 0.25ohm coil comes pre-installed in the pod and uses a honeycomb mesh that is denser than the 0.5ohm coil. Freemax states that this coil is best at 40W and I found it to perform optimally at 37W which is quite close. I started off at 30W and worked my way up in 5W increments. I found 40W to be a bit too hot though and turned it down to 37W which is where I stayed for the rest of my vaping time with this coil. Flavor is extraordinary and makes the notes in my ejuices ‘pop’. I kept the airflow only slightly closed.

The 0.5ohm coil is a more spaced out mesh than the other coil and as a result, the flavor isn’t quite as good. Freemax states this coil is best at 30W and I found that recommendation to be spot on. 30W is where this coil performed the best for me with the airflow halfway closed. Flavor is very good but not quite as good as the other coil.

Both these coils are cloud chuckers. This is definitely a device for DTL vapers who want big lung hits and huge clouds. Sorry MTL vapers, this one is not for you!

I’ve noticed very minor condensation build up in the bottom of the battery compartment but there has been absolutely no leaking. I used a 50/50 ejuice with the 0.5ohm coil and an 80VG ejuice with the 0.25ohm coil. Both coils wicked efficiently and never gave me a dry hit.

The Autopod50 is a game-changer. The double mesh coils have lasted long enough that I’m not sure if they’ll ever die! These are certainly very long lasting coils which means that you’ll be switching coils less and spending less money on replacements in the future.

The flavor from both of these coils is also amazing. These beefy double mesh and tea fiber cotton coils deliver extraordinary performance that will be hard for pod vapes with smaller coils to match.