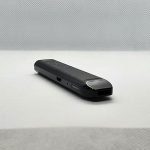 When I started vaping, pod systems weren’t around. I went from a cig-a-like to a vape pen and as I struggled to keep off the smokes I remember picking up a Aspire PockeX (AIO) which had just been released. This served me well and I felt I had finally stopped smoking. But then I had the vaping bug and tried a few different AIO devices, before moving on to mod and tank kits. Once I’d made this transition I never dreamt of going back to AIO devices.

The reason for this little personal vaping history reminiscence is that when pod kits came along, I instantly dismissed them. Never thought about trying them, and thought they were for people just wanting to make the switch to vaping and stop smoking. Almost like a newer version of the vape pens and to some extent the AIO devices that I’d already moved on from.

This is all to say that I’ve never used a pod device.

Obviously pod devices have changed since they first came on the scene, with some now blurring the lines between pod systems and mod / tank systems.

So, when the AAA Vape Savor Pod came up for review I was intrigued to finally try a pod device but my expectations weren’t very high, if I’m being honest.

Has the AAA Savor Pod changed my opinion on pod devices, or are they still to be ignored (by me at least)?

This device was sent to me by Heaven Gifts for the purpose of this review. 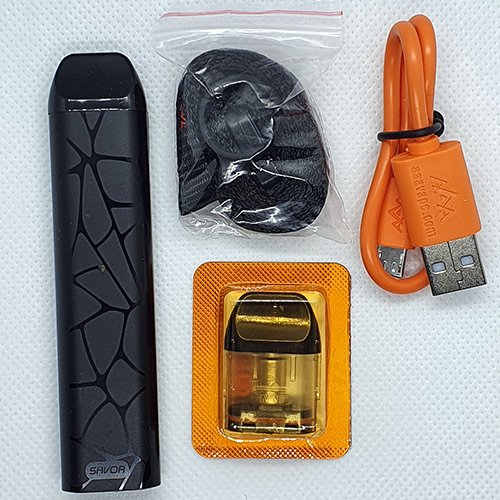 Upon opening the box of the AAA Savor Pod, the first thing that struck me was how small it is. From the images I’d looked at while waiting for the device to arrive I’d gotten a sense of what to expect, visually, at least. But I didn’t imagine it to be this small. Height wise it’s as tall as my palm is wide! Eyeballing it, it’s about a centimetre thick and two centimetres wide. It feels lovely in the hand and is very lightweight.

The build quality is very nice. I can’t find information on the material of the device but it feels like aluminium. It has a nice matte finish with a sort of cracked effect all over with the ‘cracks’ being of a highly polished finish. The device is available in six colors: black, blue, red, purple, green and rose gold. The logos on the back and front with AAA and Savor blend into the finish and are barely noticeable, which is quite nice. It has a micro USB charge port on one side, which is just slightly higher than half way up the device.

The Savor is draw activated, so there are no buttons on the device at all. The device is always on and it has a little round LED light which indicates the battery charge level when you take a draw on the device.

The Savor comes with two pods in the box, one pod containing a 1.0ohm dual coil which is preinstalled and the other containing a 1.4ohm dual coil. The pods hold 1.75ml of liquid and are very comfortable to use; the mouthpiece tapers allowing it to sit between your lips nicely.

The mouthpiece of the pods are black but the actual pods are clear, which allows you to see how much liquid you have left in them very easily. This is also visible when the pod is installed via a little window on each side of the device.

This is great in principle, because you don’t have to pull up the pod to check, however I do have a little niggle with it. Due to the small size of the pods and them housing a coil within, I have found that liquid can tend to sit on one side of the pod while air can sit on the other side of the pod with the coil in between. This means if you glance at the little window on one side of the device your liquid can seem full, but on the other it looks half empty. Not a big thing but just thought I’d mention it.

The pods themselves are held in place with 2 magnets on the base of the pods. These are strong enough that the pods sit securely on the device and they don’t move or wiggle once installed.

I did find that you have to fill the pods with care, giving the juice time to make its way around the coil to the other side, and the air to escape. If you just squirt it in, it’ll come back out. I did find if you hold the pod upside down and at an angle, it seemed to let the air escape better. It’s not a huge inconvenience and I guess it’s a trade off for the benefit of having such a small device and pod. 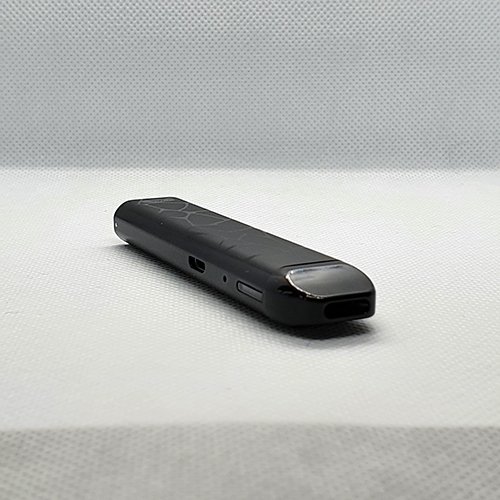 The Savor Pod will charge fully in 42 minutes, according to the manual, while in my testing I found it to be around 50 minutes . This is still good considering you’ll be getting a day’s use from the battery, it also means if you do need to charge during the day it’ll take less than an hour to fill the battery completely.

The device uses micro USB, but I would have liked to have seen USB C used. I think all new devices should adopt USB C as standard now, especially devices with built in batteries. I’ve been using the Savor regularly and have found the battery, which is 700mAh, will last most of the day. While working I’ve always made sure to have the charging cable with me and I’ve just topped the battery up to save risking running it down completely.

I do think if you’re a chain vaper or this is going to be the only device you are using you may find yourself recharging during the day, but of course it all depends how much you are going to vape it.

When vaping on the device the LED indicator light will let you know how much battery you have left via a color system. The colors and corresponding battery level are as follows:

So, how did I find my first use of a pod device? And has the AAA Vape Savor Pod managed to change my mind on them?

The most obvious thing to touch on first is how easy the device is to use. Charge it, fill it, suck on it. No buttons to press, no menus or settings to change, you don’t even have to turn it on or off or lock / unlock it. You really can’t get simpler to use.

I found the actual vape experience to be very satisfying, which really surprised me given my previous misconceptions regarding pod devices in general. The flavor from the pods themselves is good and the amount of vapor produced is plenty enough.

I found the coils to always be happily releasing bubbles when I pulled them out to have a look, so there’s no issues with wicking, and I never experienced a dry hit when using the device. I also never experienced any leaking from the pods, which we would hope would be a given with all vape devices, but sadly it can and does happen. Not here though.

Over my testing period I haven’t actually reached the end of life of either of the two pods provided. Granted, I have had two pods on the go for testing purposes and comparison, but I have to say I’m happy with the lifespan of the coils within the pods. AAA Vape advises you should get approximately 10 refills out of a pod before the coil starts deteriorating, so that’s about 17.5ml of liquid in total.

The airflow on the Savor I found to be perfect for me. I tend to vape more mouth to lung at the moment, and the Savor provides a moderately restrictive MTL vape. However, I actually found myself preferring to vape the Savor in a long, restrictive direct to lung hit. I found this provided me with a very satisfying vape.

The pods themselves don’t state the ohms of the coils, but they do have different color o-rings at the bottom to differentiate between them. The 1.0 ohm coil has a blue o-ring while the 1.4 ohm coil has an orange one. I didn’t think there was any difference in airflow between the two different pods, which to me is a good thing as you are getting a similar vape from either pod, provided you find the airflow enjoyable as I did.

Overall I have to admit the Savor has really smashed it for me. Flavor and the whole vape experience that I received was well above what I thought I was going to be getting. The battery life is great, the coil life has been great, it looks great and it’s lightweight. The only negative thing I can even think of is that you do need to take a little care when filling the pods. All in all, that’s the only negative I can find.

One more thing I thought I’d mention is the lanyard. I thought I might as well go all in and use it while testing, and found it to be such a convenient addition! I’ve had the Savor hanging around my neck constantly and have found it to be such a handy way to have access to your vape. Being solely a mod and tank user for so many years it was liberating to not have to constantly keep picking up and putting down a device. Not only that, but not having to think about where to put the device down, for fear of it being knocked over or keeping out of reach of children, has been such an eye opener for me on the benefits of little pod systems.

Now, I do have the disadvantage of not being able to compare this to other pod systems, this being the first time I’ve used one. However, what I’m giving is an opinion of a long time mod and tank user who was sceptical about pod devices, and I can say the Savor has made me realise that I was wrong about pod devices in general. What I thought were probably aimed at the new vapers, I have found to be so utterly convenient. My eyes have definitely been opened to pod systems. They say the best camera is the one you always have with you. Is the best vape the one I’ve now always got hanging around my neck?