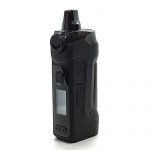 The Geekvape Aegis Boost Plus is the upgraded version of the Aegis Boost, the mighty pod mod.

If you are an experienced vaper, you’ll know what to expect from the Aegis line of products; waterproof, shockproof, dust proof, high performance.

The Aegis Boost is a highly regarded all-in-one pod device in the ever growing family of Aegis devices and was released towards the end of 2019.

Less than 12 months later we have a new version. So is it worth upgrading if you already have an original Boost? Or is it worth buying if you’re looking for an AIO pod device? Let’s take a look at the Aegis Boost Plus.

This device was sent to me by Heaven Gifts for the purpose of this review. 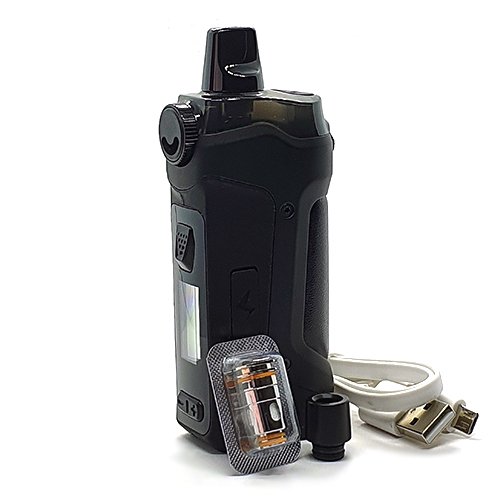 The Aegis Boost Plus continues with Geekvape’s Aegis design ethos. It has the skeleton metal frame, the high quality leather grip and a comfortable silicone body. It feels very much like other products in the Aegis lineup, which is no bad thing at all.

Comparing the Boost Plus to other AIO pod devices, it is on the larger side. It is 114mm tall, 29mm wide and 50mm deep, which makes it marginally bigger than the original boost too. That’s not to say it won’t fit in your pocket, it’s a very pocket friendly size and only weighs 180g with a pod full of liquid and an 18650 battery installed.

As is to be expected from Geekvape, the build quality on the Boost Plus is high. It’s very well made and put together. It also has the now-standard-for-an-Aegis IP67 rating, meaning the device is waterproof, shockproof and dust proof.

The fire button on the Boost Plus is a trigger style button that is responsive, clicks nicely and doesn’t have any button rattle present.

The up and down adjustment buttons are also responsive, clicky and do not rattle either.

On the side of the device is a micro USB port which is housed beneath a silicone stopper to ensure it is waterproof.

There are two 510 drip tips included with the kit. The pre-installed drip tip is a flat type which is kind of shaped like a duck’s bill, the other is circular and a more standard drip tip shape. Being 510 size mouthpieces you can switch them out for your own drip tip if you wanted to.

One of the big changes between the original Boost and the Boost Plus is that Geekvape took out the internal battery to let you put in a single 18650 cell.

On the bottom of the device there is a circular cap which unscrews to allow you to insert your battery. It has a little flip out handle which you can hold to turn the cap, or has a groove which you can insert something like a coin into to unscrew. The door can be a bit on the tight side when removing or tightening, but this is no doubt due to the o-rings providing a watertight seal, so I can live with that.

The overall size of the device is slightly larger than the original Boost, due to the device now housing an external 18650 battery. 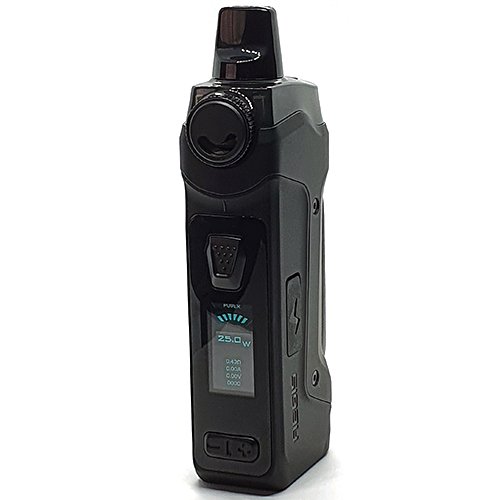 The Boost Plus features the same AS chipset that was used in the original Boost. It allows the device to fire between 5-40W in variable wattage mode.

You can also switch to TC-SS, TC-TCR, VPC and Bypass modes.

The screen on the Boost Plus is a TFT color screen that has been increased in size from the original Boost.

The screen is very clear to read and brightness can be adjusted. With the brightness up it’s very easy to see the screen in direct sunlight.

There are a few button combinations on the Boost Plus which are listed below: 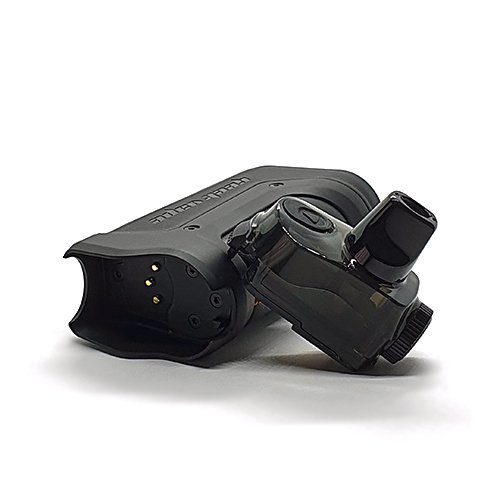 The pod for the Boost Plus holds 5.5ml of eliquid, which is an increase from the original Boost’s 3.7ml capacity. You fill the pod by unplugging the rubber bung on the top of the pod, so you don’t need to remove the pod from the device to refill. The rubber bung is easy to remove by using your nail and sits recessed within the top of the pod so there is little chance of opening it accidentally.

The rubber plug is also chunky so doesn’t feel flimsy like some do on other pod systems. It fits snugly in the fill port, with no leaking occurring during my testing time.

The fill port is circular and although fits nozzles from bigger bottles, I did have issues where bigger nozzles would stop air escaping causing liquid to spill out of the juice port. You need to take care when filling with larger nozzles.

The pod is darkly tinted, which visually looks nice. However, it does mean it’s difficult to see your juice level within the pod. You can see through it if you hold up the device to a light source though. I’m torn on this, as a more see through pod wouldn’t look as good but it would make it a lot more simple to see your eliquid level.

The pod clips onto the top of the device, with a little button to which you press to release the pod. It works great and I do actually prefer having this clip rather than magnets holding the pod in place, like many AIO’s tend to use at the moment.

The airflow is adjusted using the circular dial on the front of the pod. It works fine and is easy to adjust by turning to dial on the outer rim. I haven’t encountered any accidental adjustments of the airflow either, so the restrictiveness of the dial is just right.

The pods on the Boost Plus are not interchangeable with the pods from the original Boost.

It does state on the Geekvape website that an RDTA is coming soon, so being able to build your own coils will offer more flexibility.

There is also a 510 connection adapter coming soon, so you’ll be able to use your own tanks. Due to the small size of the device, I can imagine sticking something like a Wasp Nano RTA onto the Boost Plus would be a perfect match. 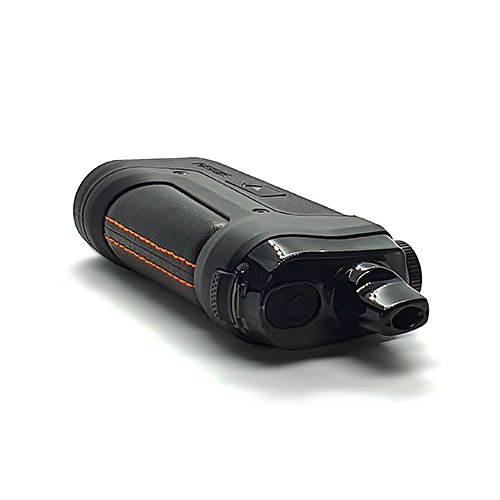 The coils are push fit and are installed in the bottom of the pod. They are a snug fit once installed but it isn’t difficult to remove the coils using a fingernail in the notch around the base of the coil. 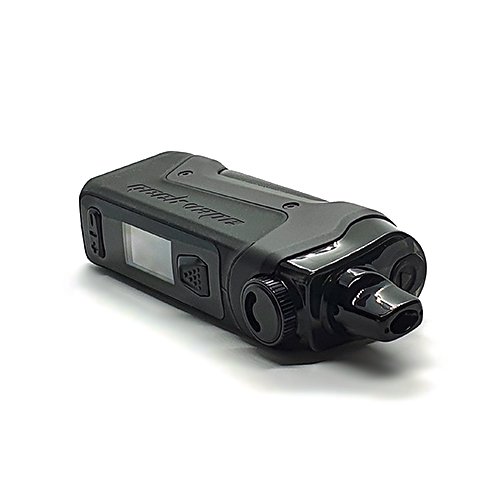 With the airflow wide open you get a really smooth vape. I prefer a more restricted airflow, so closing the airflow right down, I got a nice restricted DTL vape and found the flavor increased as well.

Next I tried the 0.6ohm coil. I get slightly less flavor from this coil than the 0.4ohm one, but they are quite similar. The draw is roughly the same on this coil as well. If I bump the wattage up to 28W, which is past the recommended max of 25W it does increase the flavor to be almost comparable with the 0.4ohm coil, but may impact coil life.

Overall, I definitely prefer the 0.4ohm coil, but they both perform really well. Really nice flavor, that pronounces the higher notes of the juice.

While using the Boost Plus I have encountered no leaking from the coil at the bottom of the pod, the refill port or the airflow control dial.

I’ve really enjoyed using the Boost Plus. The flavour from the coils is really nice and very impressive from a device running at a low wattage.

It is a very well built device and feels extremely comfortable to hold. The IP67 rating will ensure the device survives from drops, water and dust exposure.

Using an external battery is a huge plus for me from the original device and the increased pod capacity is great also. These additions do mean the device is slightly larger than the original Boost, but the benefits are an easy trade off.

The only little niggle I have is that when holding the device in my hand the fire button lies underneath my middle finger. I use my pointer finger to fire devices, and it means I’ve had to adjust my grip slightly. A little niggle, but coming from the Aegis X mod, I would have liked the button to lie under my pointer finger.

The only other thing I can pick fault with is that the font on the display could be too small for some people. With the increased screen size from the original, maybe the font could have been increased a little.

Maybe the micro USB port should have been upgraded to USB C also.

Overall, it’s a brilliant AIO pod device that is well made, comfortable to hold and provides great flavor at such low wattages.

If you are looking for an AIO pod device you can’t go far wrong with the Boost Plus.

If you already have a Boost is it worth upgrading? If you want the added benefits of an external battery and increased pod capacity then it’s a no-brainer, especially as any spare coils you have left over will pop straight into the Boost Plus.