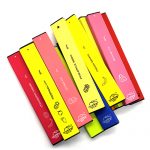 Leaving the house but don’t have a lot of pocket space? Want to start vaping but feel overwhelmed by mods and tanks? These are situations where disposable vapes are perfect.

Disposable vapes come prefilled with ejuice and don’t have to be cleaned or maintained in any way. You open up the packaging, puff on the disposable, and voila you’re vaping!

Because of their simplicity and increasing popularity, the market has recently been flooded with disposables. Some are great, some are.. Well, not so great.

Hyppe Bars are one of the many disposables that you’ll find at your local vape shop or online vape store. They come prefilled with 1.3ml of 5% (50mg) strength nicotine salt ejuice and are available in 15+ flavors.

Are Hyppe Bars actually good, or just hopping on the disposable hype train?

These disposables were sent to me by Vapor4Life for the purpose of this review. 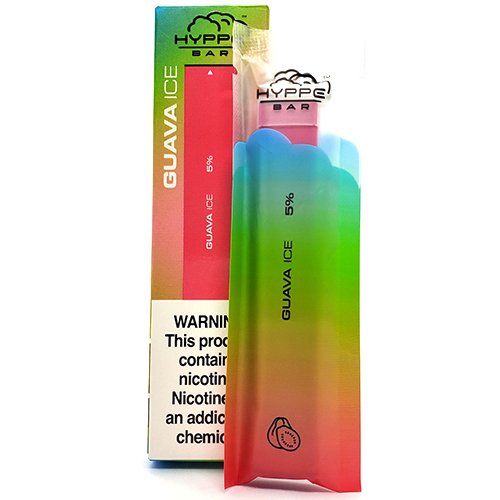 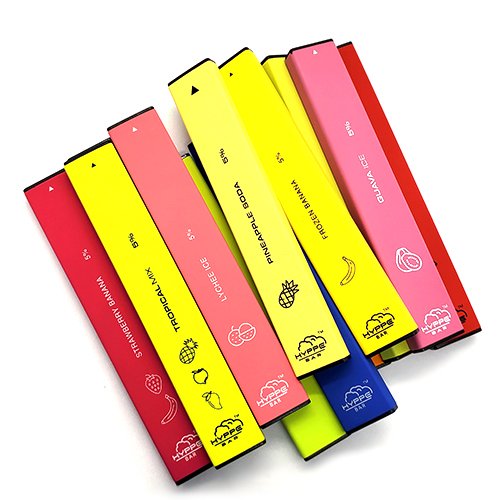 Hyppe Bars have a typical disposable vape design. They’re thin and shaped like a long rectangle which is a standard shape for a disposable. These aren’t as big as something like an Elf Bar and they don’t weigh as much either. Hyppe Bars are thin, light, and easy to slip into a front jeans pocket. Carrying a few of these at a time isn’t at all a problem.

Each Hyppe Bar is finished in a soft, semi-rubberized coating. This coating feels very high-quality, which is surprising for a device that is meant to be thrown away after it’s done. The color of each Hyppe Bar corresponds to the flavor; Orange Soda is orange, Frozen Banana is yellow, Blueberry Ice is blue, etc…

The bright colors and square shape has led to a couple of people commenting that they thought I had a carpenter’s pencil in my mouth! If you’re a carpenter you probably won’t attract attention, but otherwise you can expect people to notice.

Branding is minimal, with a Hyppe Bar logo on the bottom of each device. Each Hyppe Bar has the flavor printed on the front so you won’t mix them up, along with the nicotine strength and small icons depicting the flavors.

There’s a blue LED on the bottom of each Hyppe Bar that lights up when you take a puff. This light isn’t very bright so it’s only noticeable in the dark, or if you put your hand out in front of it.

Each Hyppe Bar comes in its own individual packaging. They come prefilled with 1.3ml of nicotine salt eliquid in 5% (50 mg) strength. As far as I can tell, this is the only strength that they come in.

Their description says that each Hyppe Bar should last for around 300 puffs. I’ve been keeping a loose track of my puffs and so far I’m over 250 puffs on some of them. They’re still going strong so the 300 puff rating is probably accurate. I would say that each one will last you a couple of days of exclusive use — not too bad considering their small size.

Hyppe Bars come in a ton of different flavors. There are over 15 different flavors and I was sent twelve of them for this review. The flavors I received are: Lush Ice, Lychee Ice, Tropical Mix, Orange Soda, Cool Melon, Strawberry Banana, Guava Ice, Icy Mint, Blueberry Ice, Pineapple Soda, Pear Ice, and Frozen Banana. I really liked all of these flavors, but a few of them could be stronger.

Lush Ice: This is a flavor that has been done by a bunch of other disposables, watermelon and menthol. The menthol is light in this flavor and not very strong, which is great if you’re not particularly a fan. The watermelon taste is also rather light but still comes through enough that I can taste it. As a whole, this flavor is enjoyable.

Lychee Ice: This flavor has ‘Ice’ in the name, but I’m not detecting any menthol. The lychee flavor is well done and tastes natural and authentic. This isn’t as strong of a draw as some of the other Hyppe Bars and the flavor is light, similar to Lush Ice. Tasty flavor but could be stronger.

Tropical Mix: This is one of my favorite Hyppe Bar flavors. It’s a mix of pineapple, mango, and peach. There’s a soda-like, almost alcoholic zing when you take a draw that is unlike anything I’ve tasted from other disposables. Pineapple is the most prominent, but mango and peach combine to add another dimension of flavor. I have a hard time putting this one down!

Orange Soda: I don’t know how they managed to recreate this flavor so perfectly but it’s amazing. You can taste the fizziness in this disposable; it tastes just like orange pop. It’s almost like a slightly diet orange pop but it’s really tasty.

Cool Melon: There’s maybe a slight hint of menthol in here but it’s barely noticeable. This is an accurate honeydew and cantaloupe vape that is sweet, but not too sweet. The flavor tastes really natural and it’s very refreshing and enjoyable to vape on. Anyone who likes melons will love this flavor.

Strawberry Banana: An old classic, Hyppe Bar does it well. It’s hard to put my finger on tasting just one of these; the strawberry and banana flavors are perfectly combined and mix together on every puff. The notes of banana are a little stronger than the strawberry but not by much. This is just sweet enough to be enjoyable without being overdone.

Guava Ice: Nice, light cooling mixed with a natural guava taste. This is how I wish their Lychee Ice flavor was formulated. The Guava flavor is bold and strong and very flavorful, with a dash of cooling to spice it up. Like their other ‘Ice’ flavors, the menthol is light enough that non-menthol vapers will still enjoy it.

Icy Mint: Icy Mint has the most cooling out of any of their flavors, and rightfully so. It is a mint flavor after all. Still, it’s not super minty and probably not for mint or menthol lovers who want something truly ice cold. It’s a light and refreshing flavor with an undeniable mint leaf taste.

Blueberry Ice: This is a really good and natural blueberry vape. Very little to no menthol — it’s essentially a pure blueberry flavor. This could be made slightly stronger but as it is it’s still good.

Pineapple Soda: Pineapple Soda is nowhere near as ‘fizzy’ as their “Orange Soda”, but it’s delicious all the same. It has a tangy pineapple flavor that is bold and sweet. This is without a doubt one of their best flavors.

Pear Ice: This doesn’t taste like pear to me. It tastes good, but it tastes a lot like the Tropical Mix. If you’re expecting pear you’re going to be disappointed, but it’s a tasty fruit flavor nonetheless.

Frozen Banana: Banana with a very slight touch of cooling. The banana flavor is rich and full, almost too much for my taste. It’s not exactly natural bananas, but it doesn’t taste overly artificial so I can’t knock it too much. Personally, this isn’t an all day vape flavor but it’s good for a few puffs here and there. 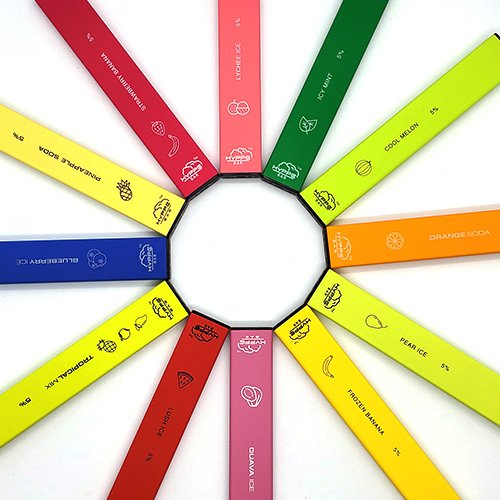 Hyppe Bars flavors are great and their performance is equally as impressive. The majority of these give a nice draw with a strong throat hit that is both satisfying and enjoyable. However, Blueberry Ice, Lychee Ice, and Lush Ice are three flavors where the flavor and draw isn’t as strong as the rest. These flavors are still good, but don’t expect a dense puff from them.

The rest of the flavors are perfect. They work without a problem and deliver a satisfying nicotine draw. People looking for their first vape or vapers looking for an easy and lightweight alternative to their box mod and tank setup will get the best use out of these disposables.

I received twelve Hyppe Bars for review and all of them worked; no duds. All twelve are still functioning as I write this review and none of them have acted up, leaked, or given any trouble.

Hyppe Bars are everything you could want from a disposable vape. They’re small and light so they’re easily portable. The flavors are all really good, although three of them would be better if the draw was stronger. The throat hit and draw from the others is perfect and will satisfy nicotine cravings in a jiffy.