GEEKVAPE Wenax U Review: Is it the Right Device For U? 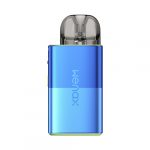 The Wenax U is Geekvape’s U series device that gives vapers the most options for how they want their draw to be. However, I didn’t find that it delivered an experience that was any better than the Geekvape AU. The option to change your wattage levels is nice, but the three wattage levels feel very similar. The airflow adjustment is also nice to have if you like a MTL draw that isn’t too tight, and beginner vapers will appreciate that there are only two settings.

I think that the overall performance of the Wenax U is good. It would have been even better if it came with the 1.1Ω pod though.

It’s a hard choice between the Geekvape AU and the Wenax U, but I think that I would pick the Wenax U at the end of the day. It gives a similar vaping experience and gives you more control over how you want your draw to be.

The Wenax U is one of three new pod vapes from large vaping manufacturer, Geekvape. It’s a part of the “U” series of pod vapes, which also includes the Geekvape AU and Obelisk U. Like its siblings, the Wenax U uses Geekvape’s U Series Pods, which are compatible with all three devices. There are currently two types of U cartridges available: a 0.7Ω pod and a 1.1Ω pod.

The Wenax U has the most features out of any of the U series devices. It features a side switch for airflow adjustment, as well as a button which allows you to set the wattage output to one of three levels. The Wenax U will fire at up to 20W and comes with a 1000mAh battery built-in.

In this review, I’ll go over the Wenax U and break down its design, features, and performance. I’ll also compare it to its U series siblings. Keep reading to learn everything that you need to know about Geekvape’s latest pod device. 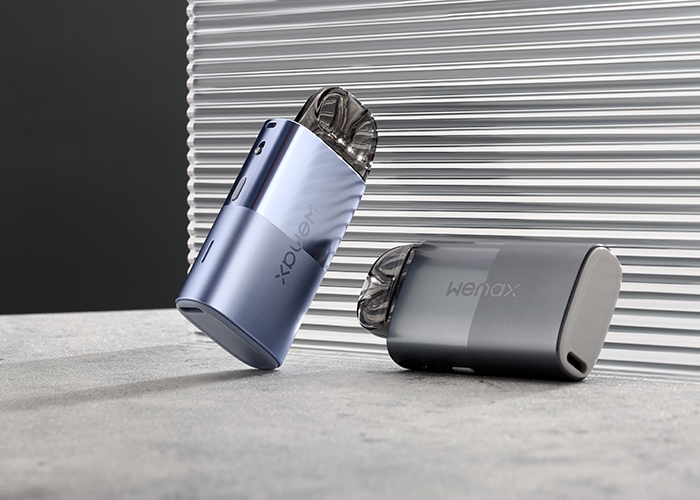 The Wenax U has a design that is a little different from its “U Series” siblings. It has a shape that is best described as rectangular, but all of the sides are slightly rounded. This makes it look rectangular from the front, but it has an almost oval shape if you look at it from the top or bottom.

Still, it’s very compact. It’s even smaller than some boxy disposable vapes that I’ve used but the Wenax U has the added advantage of being able to be filled and refilled with your favorite ejuices. It’s 78.2mm tall, 35.4mm wide, and 17.25mm deep, and it’s easily concealed in my hand. You can definitely pull off a bit of stealth vaping with this little guy.

The rounded sides naturally fall into my hand when I’m gripping the Wenax U, so it’s pretty comfortable to use. It’s also only around 50g with the pod, and it comes with a cool GEEKVAPE lanyard in the box. I’ve been wearing it around my neck and sometimes forgetting that it’s even there. The lanyard attaches to a handy little anchor spot at the top corner of the Wenax U.

The body is made of what I think is aluminum alloy, but the actual material is not stated anywhere on Geekvape’s website. The body is solid and does not have any flex, and it seems to be durable as well. 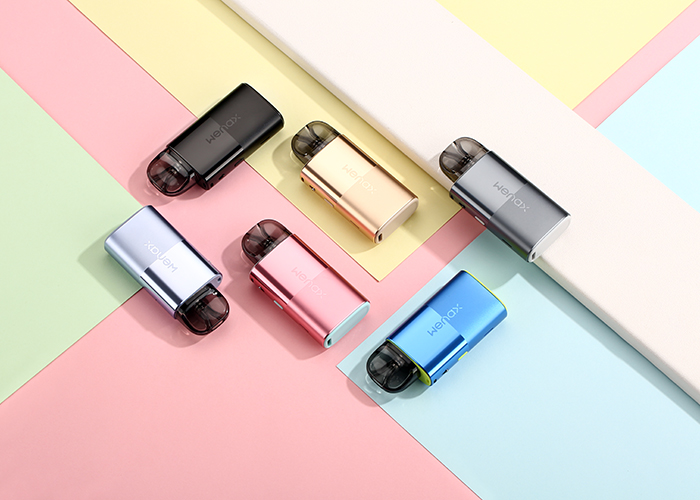 There are eight colors available, all of which have a two-tone body. By two-tone, what I mean is that they’re the same color, but the top half has a shiny finish and the bottom half has a matte finish. Personally, I like the look, and all of the colors look pretty attractive.

At the top and bottom of the Wenax U is a plastic portion that is a different color depending on which color body you get. On my blue unit, the top and bottom are neon green/yellow. The power button and airflow control portion are also this neon color. 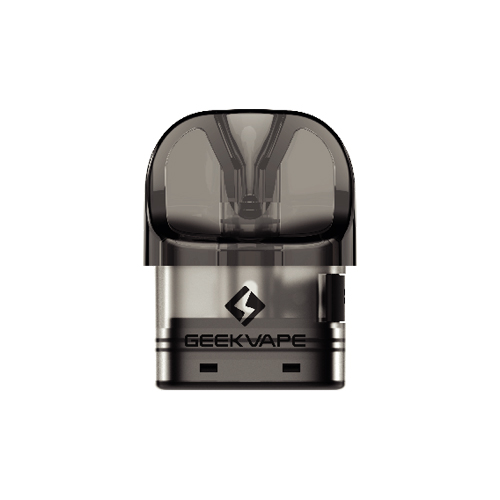 The Wenax U, like the Geekvape AU and Obelisk U, uses Geekvape’s U cartridges. These cartridges are cross-compatible between all of these devices, as well as with the Sonder U.

Only one U series cartridge comes included with the Wenax U, a 0.7Ω pod that functions at 16-19W. This pod will deliver a MTL or tighter MTL draw depending on how you have the airflow set.

Each pod holds up to 2ml of ejuice and attaches to the battery by way of magnets. There are two strong magnets that hold the pod firmly to the Wenax U. When installed, the pod wiggles a little bit but there’s no major movement. The magnets are strong and keep the pod held firmly in place, so you don’t have to worry about it popping out unintentionally, which is nice.

The pod has a light tint, but it’s still not a problem to see how much ejuice is left in the pod. Most of the time, you’ll have to remove the pod from the device to check on your ejuice level anyway, as half of the pod is not visible when installed.

The fill port is located on the side of the pod, towards the bottom. Filling is easy and straightforward. The rubber plug also nicely seals the fill port and I have not had any instances of leaking from the fill port. 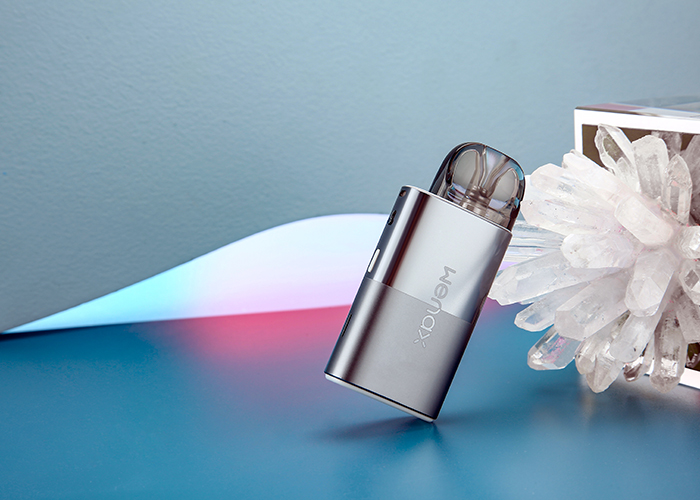 The Wenax U has more features than any of its U series siblings. It has both adjustable airflow and adjustable wattage, which gives you more control over your draw. Even though it’s more customizable, I didn’t find it hard to use at all. In fact, I think that the way that Geekvape has implemented the features on the Wenax U is still very beginner friendly.

So while you get some more control over your airflow, you don’t have to fiddle with setting the small slider to some precise, perfect way. You can either set it up or set it down, and you’ll get a tighter or looser draw.

The Wenax U can fire at up to 20W but there’s no documentation on Geekvape’s website that indicates what wattage is outputted at each level. I’ll take an educated guess though.

One complaint I have is that there’s no easy way to check what your wattage output level is set to without changing it. You have to press the button three times to change the wattage output, and then you’ll see the LED light up to indicate that you’re now one level up. I would have liked an easier way to check, rather than having to cycle all the way through the wattage levels just to get back to where I was. 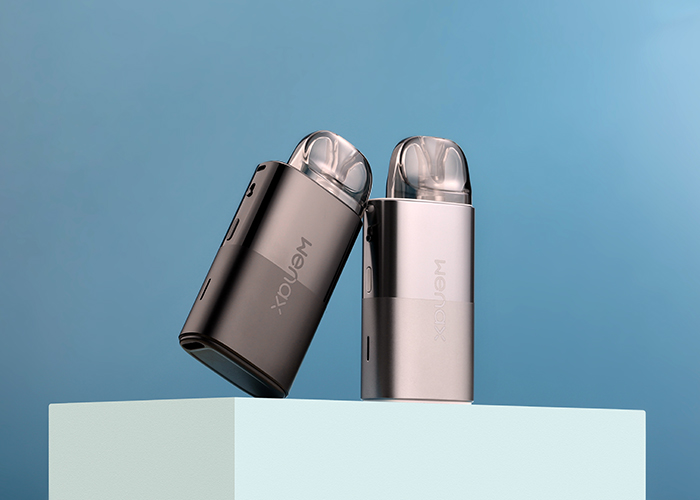 Remember that LED bar that I was talking about earlier? Not only does it indicate your wattage output level, but each time that you draw or reattach the pod it will light up to indicate your battery charge level. The colors of the LED and corresponding battery life are:

All told, the battery on the Wenax U lasts for a solid day or two of vaping. That’s good, and rather respectable battery life out of the 1000mAh battery.

It takes about an hour for a full charge if your battery is dead. The Wenax U also features pass-thru charging so you can vape on it while it charges as well. 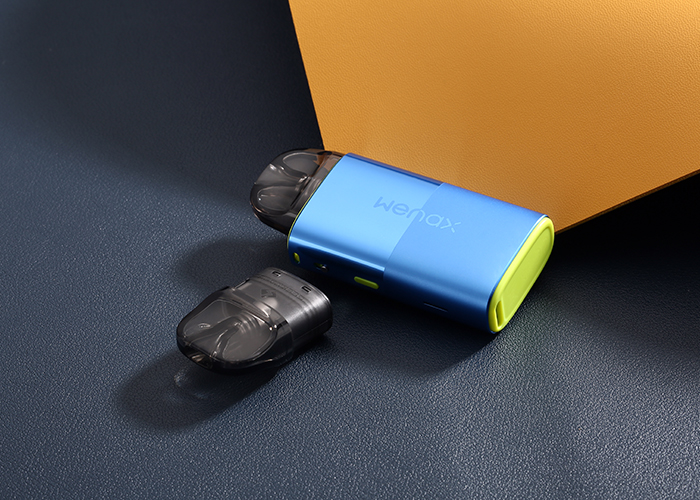 The Wenax U only comes with a single pod, a 0.7Ω U Series cartridge. What’s neat about this device is that you can use any of the pods from any of Geekvape’s other U series devices, like the 1.1Ω pod which is sold separately.

For the purpose of sticking to what the Wenax U comes with, I’ll only be going over the 0.7Ω pod in this review. If you want to know how the 1.1Ω pod performs, check out my review on the Geekvape AU.

The power on the Wenax U is just right for these mid strength nicotine salts. It delivers good performance with good flavor on the medium (blue) power output. Increasing this to the green output slightly increases the flavor, and also increases the strength of the draw a little. However, I didn’t find there to be a big difference between the three wattage levels, so whichever one you use will give you a similar vaping experience with the 0.7Ω pod.

My favorite way to vape the Wenax U is on the medium power setting with the airflow closed. It delivers good flavor, warm vapor, and a nice draw. Altogether, I rather like using the Wenax U with the settings like this. If you like a very tight MTL draw then it’s not going to deliver, but those who like a regular MTL draw to a MTL draw with some more airflow restriction will appreciate what it delivers.

The Wenax U is Geekvape’s U series device that gives vapers the most options for how they want their draw to be. However, I didn’t find that it delivered an experience that was any better than the Geekvape AU. The option to change your wattage levels is nice, but the three wattage levels feel very similar. The airflow adjustment is also nice to have if you like a MTL draw that isn’t too tight, and beginner vapers will appreciate that there are only two settings.

I think that the overall performance of the Wenax U is good. It would have been even better if it came with the 1.1Ω pod though.

It’s a hard choice between the Geekvape AU and the Wenax U, but I think that I would pick the Wenax U at the end of the day. It gives a similar vaping experience and gives you more control over how you want your draw to be.