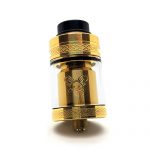 If you are a vaper in any capacity then chances are you have heard of Hellvape and indeed the Dead Rabbit branded atomizers that they make. In fact, you are likely to own at least one of the incarnations which are widely recognized as putting Hellvape solidly on the vape map. All were made in conjunction with the now retired YouTube vape reviewer Vaping Heathen.

It all started with the original Dead Rabbit RDA and from this there have been many further iterations spanning RDA’s, RTA’s and indeed sub ohm tanks. Is the version 2 we are looking at today a worthy purchase? Full disclosure I never actually owned the V1 RTA so this will not be a comparison review by any means. With that said let’s jump in and find out… 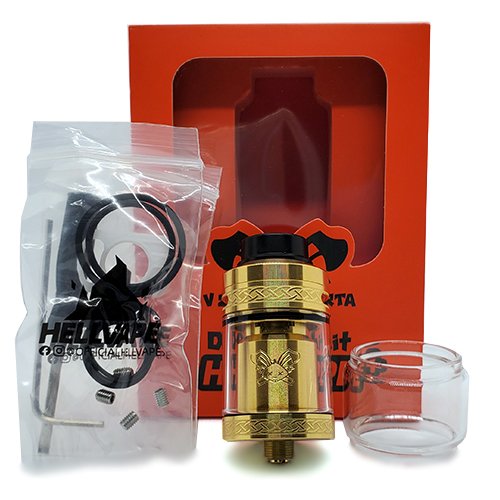 Right out of the box the build quality is to a good standard as you would expect from Hellvape. Not high end quality but for its price range it’s excellent. As usual Hellvape have provided a plethora of color options, nine in total: Purple; Blue; Gold; Black; Stainless; Full Black; Rainbow; Gunmetal; Matt Stainless. I have the gold one for review.

If I’m honest I’m not a huge fan of the aesthetics on the V2 overall and, whilst I didn’t own one, I actually prefer the look of the V1. They all come with a standard black drip tip, fairly low profile at just 5mm and it has a small lip running around the base where it slots into the 810. Not stunning in terms of looks but it’s functional and does the job.

The top cap is a ‘push to fill’ system which I have to say I really don’t like on any RTA. This is more of a personal preference, although I fully understand the convenience, I just find that over time they become loose and susceptible to opening in your pocket. Again, personal preference but actually Hellvape have done a decent job with this one as far as maintaining and cleaning goes. The whole thing comes apart, has nice tolerances, and during testing I had no issues.

Moving down the device we come to the top airflow which is a dual system on both sides; a single slot style that follows downwards to your coils via the honeycomb holes visible inside the chamber. Stoppers are present for full open/closed and the design is adorned with a Celtic pattern mirrored around the base of the RTA which I’m also not a big fan of but it’s fairly subtle and no big deal. 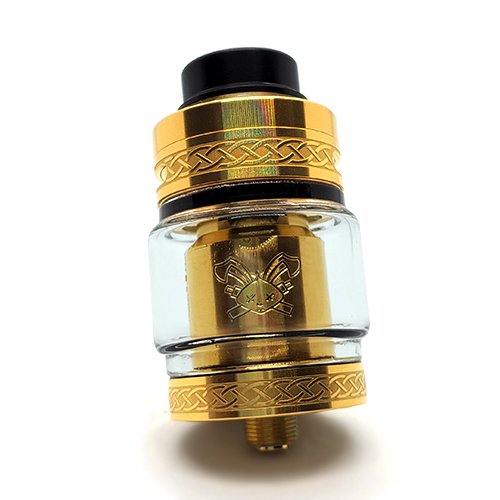 Two glass tanks are provided which I like to see, I’m not one that’s bothered by the aesthetics of bubble glasses but this one isn’t too bulbous and looks good. The base of the atty is where things become a little more interesting. We have a cog shaped removable frosted PC insulation plate. I like this a lot, it serves to prevent excess heat transfer from your mod but also being plastic, it won’t scratch the top of your favorite mod! Well done Hellvape.

The deck of the RTA is very familiar; same ‘Y’ styled rabbit ears that have evolved from the original straight ones of the previous atomizers. You will find your wicking channels to be of a reasonable size, and as with any RTA your wicking needs to be spot on (more on this in the build section of the review).

Around the wicking channels there are two barriers. These not only help to keep your wicks in place but they also prevent the chamber from spinning and keeps the airflow in place. Last but by no means least we have a nice protruding 510 pin which is suitable for a hybrid mod if you so choose. Let me be clear, there’s nothing new or groundbreaking here but there also doesn’t need to be as it’s a tried and tested formula… If it ain’t broke, don’t fix it!

How to build on the Dead Rabbit V2 RTA 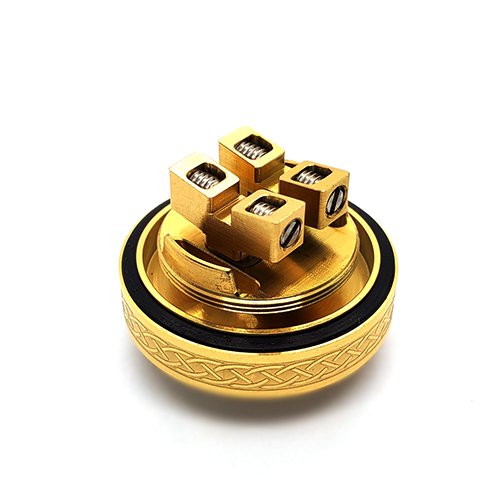 Building on the DR RTA V2 is a relatively simple process and not too dissimilar from building in any other DR product. Drop your coils in, tighten them down and snip the excess from below the posts.

Bear in mind that you want to keep your coils fairly high. It’s a pretty forgiving deck with plenty of room for whichever coils you decide to use, but you want to make sure that the airflow is hitting properly from the honeycomb inserts in the chamber. In testing, I have found that the perfect leg length is anywhere between 6.5mm to 7.5mm. This keeps the coils fairly straight in line with the deck.

Wicking the V2 is where the process becomes a little unforgiving. Due to the height of the coils this RTA relies heavily on a good amount of capillary action. From the juice intakes, the liquid has quite a way to travel in order to reach the coils.

This is not a con by any means it just requires a little more practice than other RTA’s. The trick to getting this right is to thin the cotton correctly. After passing your cotton through the coil, gently comb out some excess cotton from either side.

I have built the V2 having tested 2.5mm coils, 3mm coils and a single large 4mm coil. You want to create a solid dam style wicking, just resting the cotton inside the wicking channel with very little below the barrier of the channel. Cutting your cotton too long will clog the juice wells and too short will flood the deck.

It’s not a difficult RTA to build on but just bear these points in mind and you will have a wonderful saturated vape that will more than keep up with solid chain vaping. 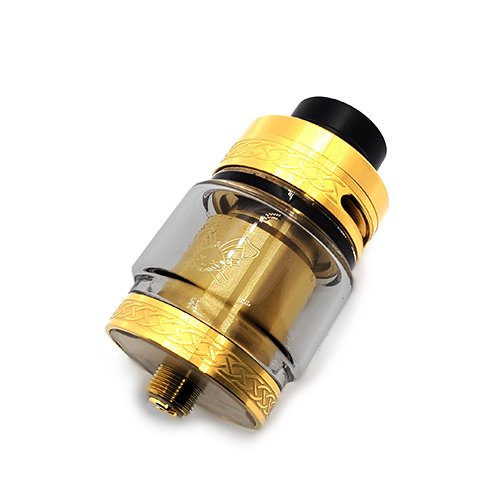 (This is the part where I forgot about my cons on the aesthetics!)

The Dead Rabbit RTA V2 is a solid performer in all areas, as I stated in the intro I cannot get into comparisons with the V1 as I didn’t own it. I tested with 3 different coil configurations and I had no issues  with dry hits or spit back. The tank is loud but the top airflow is the reason for this and is  always the trade off for having no leaking or condensation gathering around the base.

I had no seepage of ejuice even when I left it standing with a full tank for 2 days. I like the airflow full open on this one; it’s not too airy at all. Cutting the airflow down doesn’t result in whistling and I didn’t find the tank becoming too hot after a chain vape; kudos on the heat dissipation plate Hellvape.

Flavor is great from this RTA! Smooth and cloudy as you like. Just recently I’m blown away by how close the flavor from a good RTA is getting to that of an RDA and this one  is right up there. Once you get the wicking down it will no doubt impress.

Hellvape have absolutely nailed this one! I can’t speak to Heathen’s involvement but, all that aside, it’s a good solid RTA. Build quality is on point, flavor is amazing and I have thoroughly enjoyed using it. All of the cons I have are personal preference, none affect the performance.

All in all if you are in the market for a new RTA that won’t break the bank, would I recommend the Dead Rabbit V2 RTA? Absolutely I would.

Before I forget… one final tip… if you are someone that likes to purge before you vape, don’t do that on this RTA… unless of course you enjoy hot vapor in the face. 😉