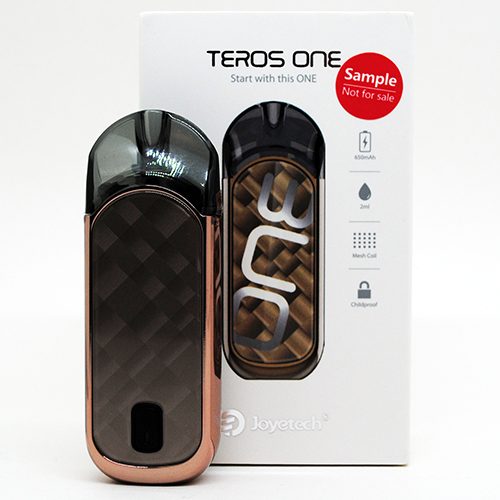 Home » Reviews » Joyetech Teros One Review — Is This Pod Vape The One?
Pod Vape ReviewsReviews

Joyetech Teros One Review — Is This Pod Vape The One? 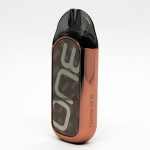 Not too long ago I reviewed the Joyetech Exceed Grip and it turned out to be a decent device. Now I’m back with another review on a pod vape by Joyetech, the Teros One. It’s a fancy looking device with glass panels on the front and back.

The Teros One is a constant output mod so the draw will remain constant even as the battery dies. It’s got three power modes that can be switched on the fly and this lets you choose the warmth of your vapor as well as the amount of clouds. It’s also got a 2ml pod with a push-to-fill port for easy filling, uses a pod with a built-in 0.5ohm coil and it has a 650mAh battery with USB-C fast charging.

I’m always on the lookout for the perfect pod vape and the Teros One has some nice specs. Is this pod vape the one?

Joyetech Teros One Review — Is This Pod Vape The One? 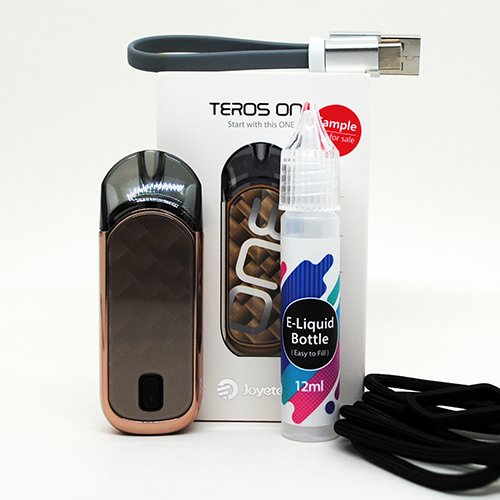 This is a fancy looking pod vape. It’s got glass on both the front and back of the device that covers a diamond patterned panel. It looks pretty neat. “ONE” is printed on the back in large print. These glass panels pick up fingerprints and smudges extremely easily so it’s hard to keep looking clean. Plus, my device is gold colored which I think looks a bit feminin. Overall, it’s still a nice device.

The Teros One is the same height as a lot of pod vapes at 80mm tall. It’s got a long, rounded shape that measures 29.5mm wide and 15mm thick. This shape is a change from the boxy design of the Joyetech Exceed Grip and it can be palmed and concealed easily. The 64.5g weight is also good. It feels solid but it isn’t too heavy.

Included in the box is a lanyard that slips around the body of the Teros One. This lets you wear it around your neck and prevents the mouthpiece from trapping pocket lint. I used this lanyard a bit and it’s comfortable to wear around your neck because the Teros One is pretty light. At times I forgot I was wearing it!

On the front of the Teros One there’s a small rectangular button. You can turn the device ON/OFF with five clicks. This button also lets you change the wattage level to one of three settings which is indicated by the LED color: green is high (13W), blue is medium (11W) and red is low (9W). To change the wattage quickly press the power button three times.

The button power button on the Teros One is solid and doesn’t rattle or shake. It’s firm but works smoothly and easily. The device itself appears to be mostly made out of metal but I can’t find the type listed. Regardless, the Teros One is a properly constructed device. The only design flaw is how easily the panels pick up fingerprints.

The Teros One comes with just one 0.5ohm pod in the box. This is going to be a con for me. Every device should come with at least two pods! This almost forces you to buy a pack of pods straight away because if you burn out your first pod or it’s a dud, you’re screwed.

The 0.5ohm pod has a mesh coil built-in and it can’t be removed. The pod will hold up to 2ml of eliquid and is filled through a push-to-fill port. This is becoming more common on pods and I actually like how they work. Just push the nozzle of your ejuice bottle into the port to apply pressure and start to fill.

The two downsides are that you can’t easily remove ejuice and that dropper bottles don’t work too great. Joyetech have included a 12ml pointy tip bottle in the box though so this can be used to fill if your e-juice bottle doesn’t work.

The pod slips into the top of the device and is held in place magnetically. The magnet is kind of weak but it holds the pod in the device. It’s not a tight fit though and there’s a lot of wiggle. The pod hasn’t come off in my pocket yet but it seems likely to happen.

The pod wicks great and has handled 70VG/30PG & 60VG/40PG eliquids just fine. No leaking of any sort and no dry hits. 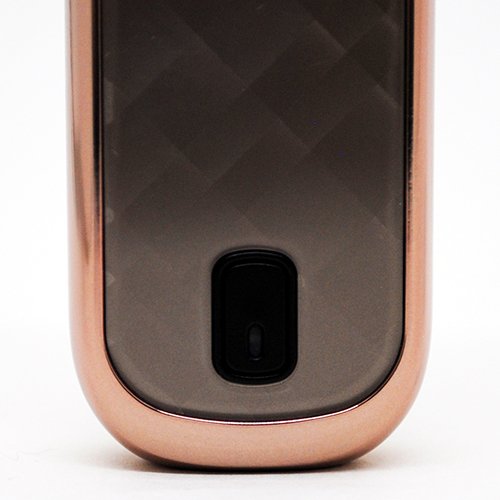 I used the device on the blue and green power levels and got about two days of heavy vaping before it died. That’s pretty good for constant output. I thought it would die a lot quicker but the 13W output of the highest wattage level is still low enough that it doesn’t use too much battery life.

The same LED that indicates the wattage level also lights up each time you take a draw to indicate the battery charge level. There are three colors:

From nearly dead the device charged very quickly. It took only 30 minutes to get it back to full thanks to the USB-C charging. That’s almost no time at all. 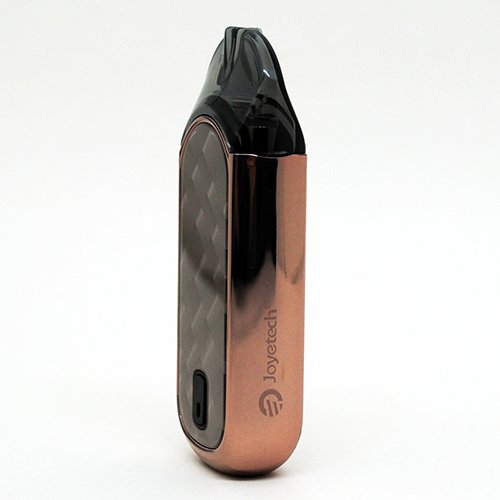 The Teros One is a decent MTL pod vape that delivers average flavor. It’s nothing too special when it comes to clouds or flavor but it was a good device to use — when it worked properly, that is.

I had a super frustrating time testing this device. The draw-activation was just a nightmare. At times it would work great but sometimes it just wouldn’t work at all no matter how hard I pulled. There’s no button-activated firing either so there’s not much that I could do. I found that blowing through the USB port would help a little but it was still a frustrating experience.

Aside from that major issue, pod life was good. I’ve been through 5 refills and it still tastes the same as the first. Again, the flavor from this device isn’t amazing but it’s acceptable. The low setting is a cool vape that I didn’t like too much. Medium and high power were progressively warmer and better flavor too.

The draw is a loose MTL that takes some effort to pull, even when the draw activation actually works. If you like an easy to draw, tight MTL vape then this isn’t going to suit you. 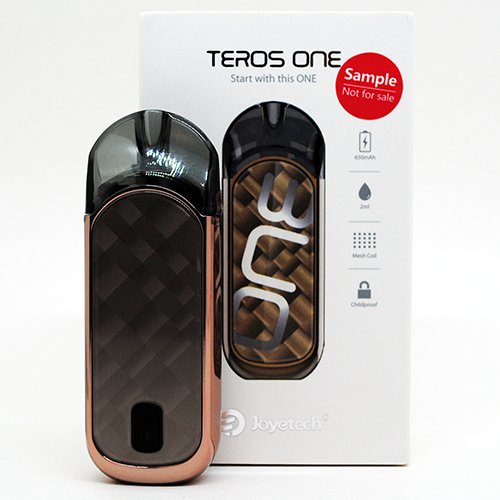 Joyetech have created a pod vape with good specs but it has a critical flaw. If the draw-activated firing wasn’t an issue this would be a decent device. However, with what I experienced I can’t recommend the Teros One. It could be that I received a faulty device but we’ll find out as more reviews are published. For now, I would recommend steering clear of the Teros One.