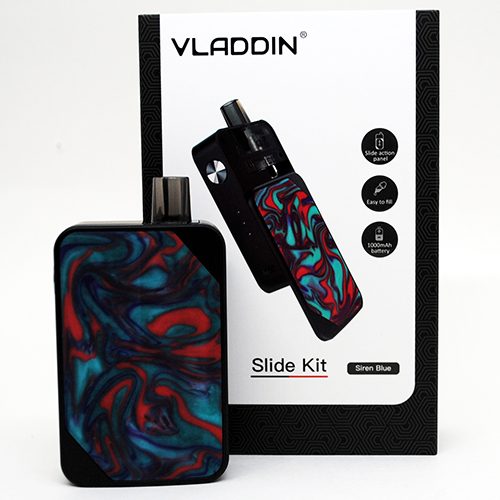 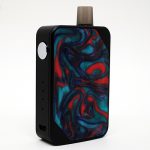 The Slide is a new all-in-one style device from vape manufacturer Vladdin. It’s a small boxy device that is similar in shape to the Joyetech Exceed Grip or Rincoe Tix. The Slide has a trick up its sleeve though. Instead of a removable door it’s got a resin panel on the front of the device that slides down to access the pod.

The Slide has a 2ml refillable pod that uses replaceable coils and it comes with a 0.8ohm mesh coil and a 1.2ohm regular round wire coil. It’s also got a 1000mAh battery, three wattage levels, and an adjustable airflow control ring. 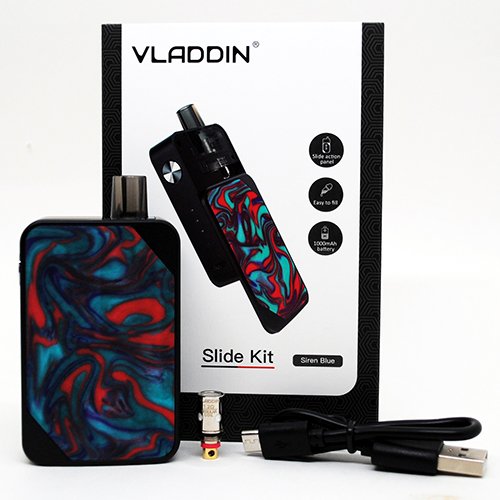 The Slide measures 82mm tall, 45.8mm wide, and 20.2mm thick. It’s a nice little device. The size and shape are like a miniaturized box mod but it doesn’t weigh nearly as much. It’s a relatively light mod that doesn’t feel fragile or cheap; it’s got just enough heft to it to feel solid.

The outer shell is made out of aluminum while the interior is made out of plastic. The front side of the Slide has a real resin panel that reminds me a lot of the Voopoo Drag. I think the Drag has some of the nicest resin out there and the quality and design of this resin is very similar. It’s really pretty.

The front side of the Slide is where this device gets its name. It slides down towards the bottom of the mod to reveal the pod inside. This is a great design because it keeps the pod held in place and prevents it from falling out accidentally. No way this pod is coming out in your pocket! The door slides with ease and uses a track system that is very smooth. The door is also spring loaded and stays shut with no wiggle or rattling.

There’s a single circular fire button on the side of the Slide. It rattles a bit which I don’t like but otherwise it works well. Below the fire button are four LEDS. The top three LEDS are for battery life. The last LED indicates your wattage setting.

The Slide has three wattage levels: red, green, and blue. Whereas every other pod vape I’ve seen has had the green LED for the high setting, the Slide uses blue. Weird. You can switch between the wattage levels by quickly pressing the fire button three times. The wattage levels are red (3.3V), green (3.5V) and blue (3.7V).

In the box you get one pod and two coils. The pod is slightly tinted but it’s not too dark so it’s still easy to see your ejuice level. The mouthpiece is built into the pod and it’s rather comfortable to vape on. It’s circular and similar to a 510 drip tip.

The pod holds 2ml of ejuice and fills through a port on the side. When you slide open the panel you’re supposed to be able to  fill the pod without having to remove it but I actually found this hard to do. Because the rubber plug is located so close to the body of the Slide it’s hard to remove when still in the device. I always had to slide the pod out just a little bit to remove the plug and fill the pod.

There’s an airflow control ring at the base of the pod. It unscrews from the pod and attaches to your coil. The whole airflow and coil assembly then screw back into the pod. There’s two wide slots for airflow and it’s fully adjustable to deliver anything from a restricted direct lung draw down to a restricted MTL.

The Slide comes with a 0.8ohm mesh coil and a 1.2ohm regular round wire coil. By adjusting the airflow you can use either coil for a DL draw or a MTL draw but I found that they both work best as MTL coils. The flavor is better and the draw just feels nicer.

I did have some wicking issues with both coils though. They don’t seem to fare very well with 80/20 VG/PG ejuices as they seem to struggle to wick fast enough. If you’re not chain-vaping or taking very long draws then they work fine but otherwise they can’t keep up. Even 70vg/30pg ejuices didn’t wick too well.

What I found is that both coils worked best with ejuices at or under 60VG. This limits the ejuices you can use with these coils if you’re chain vaping. On the other hand, the coils lasted for over a week each and were still going strong. What they lack in wicking capabilities they seem to make up for in coil life. 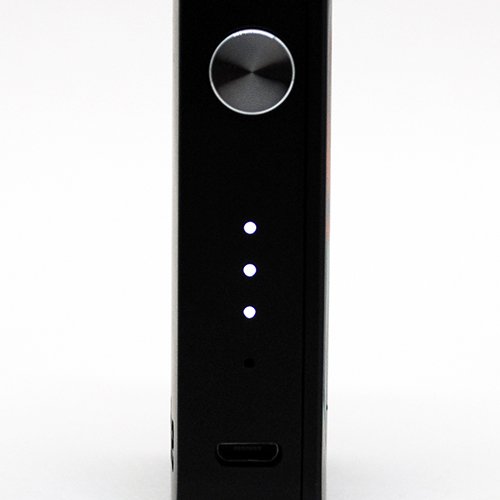 The Vladdin Slide has a 1000mAh battery. There are three LED indicators that light up white to let you know your battery level. When the battery is fully depleted a red LED will flash 10 times.

Battery life has been good with this device. I liked using the green power level which is 3.5V and I was able to get around two days of usage out of the device. This was the equivalent of two refills. Two refills doesn’t seem like a lot but the device doesn’t use a lot of ejuice. I would say that I’m happy with the battery longevity of the Slide.

I’ve never tested another Vladdin device so I didn’t know what to expect. It’s a nice little vape though. Aside from the wicking issues, the coils work and vape great with a 60/40 vg/pg ejuice. With the Slide set to medium power and the airflow closed down to just a pin hole it’s a warm and tight draw. Really nice.

My favorite of the two coils was the 0.8ohm mesh. It’s a flavorful coil especially for being so small. The 1.0ohm coil gives slightly less flavor but it’s not at all bad. Both coils provide above average flavor and I enjoyed vaping with them. The only real issue is how poorly they wick high VG ejuices.

I first tested the coils with an 80/20 vg/pg, 6mg ejuice. They wicked fine at first but my chain vaping quickly dried them out. I started to get a semblance of a dry hit and the taste of burnt cotton so I swapped in some new coils and changed up the ejuice.

60vg/40pg worked a world better for regular e juices as well as nicotine salt eliquids. I found the throat hit from the 0.8ohm coil to be more satisfying than the 1.2ohm coil but I like a more aggressive hit. When using nic salts, your favorite coil will probably ride on how much of a throat hit you like. If you want it to be less pronounced you can use the 1.2ohm coil. More aggressive? Use the 0.8ohm mesh. 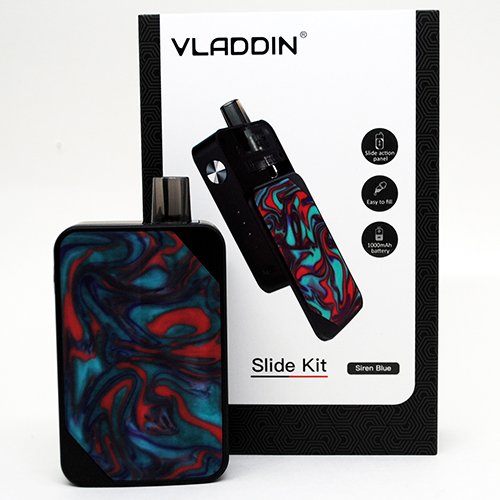 The Vladdin Slide is a good AIO device but its coils are a weak point. The wicking issues with high VG ejuices severely limit what you can use but otherwise the coils have really good flavor. The battery life of the device is good, the design is really nice, and the tight MTL draw is very enjoyable. The three wattage outputs and adjustable airflow are also great to have.  If you vape ejuices with 60% VG or lower then this could be a great device.  But if you’re using 70/30 ejuices this isn’t the device for you