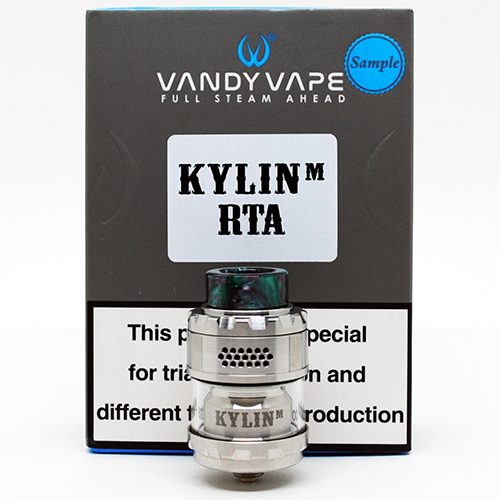 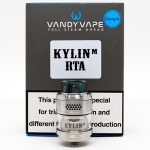 The Kylin series of rebuildable tank atomizers have long been some of the best in the industry. It all started with the Kylin RTA. Since then we’ve had the Kylin Mini and Kylin V2, both of which were excellent flavor and cloud RTAs. They were easy to build on, looked great and most importantly produced great vapor.

The Kylin M is the latest addition to the family. It keeps a similar look to the previous Kylin tanks but this time brings a dedicated mesh build deck that is very similar to the Wotofo Profile Unity RTA. It will hold up to 4.5ml of eliquid and is top filled for easy use. Plus, there are twenty airflow holes for a high level of airflow customization. It is a top airflow RTA though and that’s usually not good for flavor, so we’ll have to see how this pans out.

Does the Kylin M live up to the high expectations associated with the Kylin name? Keep reading to find out! 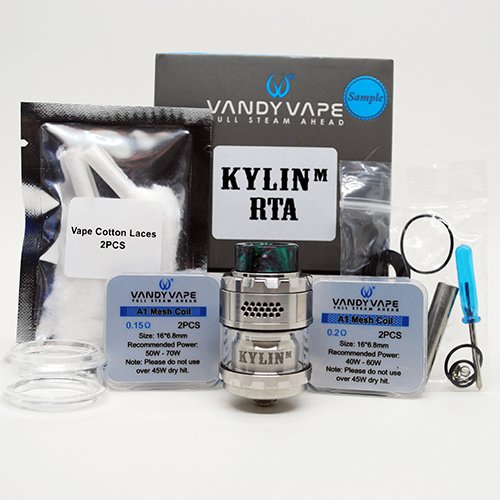 This RTA is awesome for all of the goodies you get included. There’s everything you need to build and start vaping (if only they had included some ejuice, too). You get a pair of two different mesh coils, two pieces of agleted cotton and, most importantly, a mesh shaping rod. This is used to form your mesh so that you won’t get any hot spots and it will be very useful if it’s your first time building a mesh coil. A+ for the box contents here. 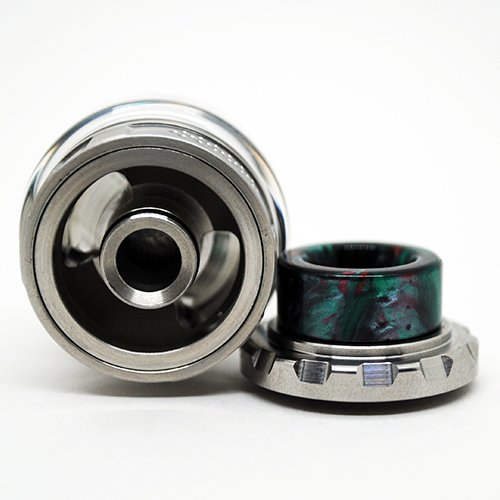 The Kylin M looks very similar to previous Kylin tanks. It’s got ridges along the top cap as well as ridges along the base of the tank — a signature design of the Kylin series. This tank has a 24mm base diameter so it’s about average size and will fit on most mods without overhang.

Overall it’s a pretty good looking tank. I got the stainless steel version for this review but it’s also available in grey, gunmetal, black, rainbow, gold and an especially nice blue color. The build quality is on-point, as you would expect from Vandy Vape, and all pieces are clean cut and very well machined.

You get one drip tip with the Kylin M and it’s a wide bore 810. It’s made of resin with multiple different colors infused into it and I like the look and feel. It’s just thick enough and it feels good on the lips. I hate it when drip tips are super thin so that’s a plus for sure.

The top cap is threaded and simply unscrews to reveal the fill ports. This is my favorite type of top cap because it’s also the most secure and ensures that you won’t have it accidentally opening in your pocket. The threading is smooth and the top cap comes off and goes on without a fuss.

Underneath the top cap the fill port section is quite deep. It extends down for a few millimeters so if you turn the tank upside down juice will collect in this top cap section. I found this useful when I wanted to check on my coil but still had a bunch of ejuice left in my tank.

There are two large fill ports, both of which are quite wide, so I had no trouble filling up the tank. Plus, the fill port section is shaped like a bowl and is slanted downward to funnel ejuice into the holes. 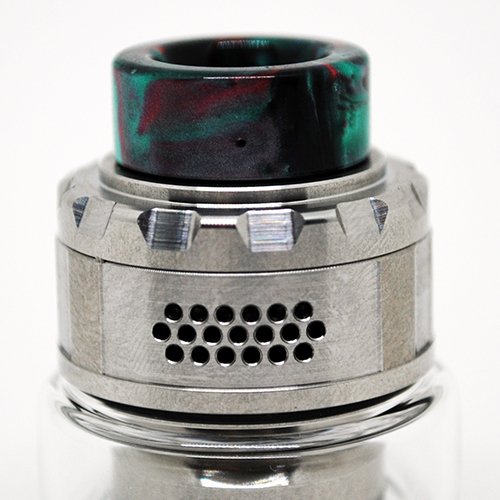 The airflow on the Kylin M is a top airflow, honeycomb style and it’s made up of twenty small holes. Air feeds in through these top holes and is then funnelled to the mesh coil through two large slots on the inside of the tank. There’s no whistling when you take a draw but the airflow is a little on the loud side.

With the airflow fully open you get a nice, direct lung draw. Restricting it down to about halfway is the way that I liked to vape this tank and it makes it a little more restricted. With the airflow almost fully restricted it gets to be a restricted direct lung hit but this is way too little airflow for the mesh coil. It ends up getting way too hot and was almost uncomfortable to vape. For the best results I would suggest keeping it anywhere from half to fully open.

The build deck on the Kylin M is almost identical to the Wotofo Profile Unity. It’s got two spring-loaded clamps and these are quite narrow in size. However, the mesh that comes with the Kylin M is cut to size and fits in perfectly.

The screws are good quality Phillips head screws and I didn’t have a problem with them. Thank goodness because I’ve been seeing a lot of poor quality screws on build decks lately and it can really ruin the entire building experience. Just take care not to loosen the screws too much on this build deck or they’ll pop out due to the springs.

The center of the deck features a spring loaded block. This block pushes down while installing the cotton and then pushes up on the cotton to make full contact with the mesh coil. It’s a great design because if you’ve ever built a mesh coil, you’ll know that anywhere the cotton doesn’t make contact is going to be a hot spot. This spring loaded block completely prevents this problem if you use a good wad of cotton (which is definitely recommended with this RTA). Conveniently, Vandy Vape include two thick pieces of agleted cotton with the Kylin M.

The wicking channels on this RTA are wide enough to fit a lot of cotton but they are a little shallow. The wicking ports are oval shaped and large enough for good wicking though. I never had a problem with dry hits with this RTA and, if you build it correctly,  you won’t either.

Building on the Kylin M RTA

If you’ve never built a mesh coil before then building on this RTA can be a little bit tricky. However, once you know what you’re doing it’s actually pretty simple and straightforward. The Kylin M comes with everything you need to build: a pair of two different mesh coils, two pieces of thick agleted cotton and a mesh shaping tool.

I started by slightly loosening the screws on the build deck. The mesh is super thin so you don’t have to loosen them much. Plus, because the clamps are spring loaded, loosening them too much will make them pop out. Next, I took my 0.15ohm mesh coil and used the mesh shaping rod to form it into a semi-circle. This part is key; you don’t want to bend or crease the mesh. Instead, smooth it around the mesh shaping rod to form a nice, perfectly curved semi-circle.

Carefully take the mesh coil and place the ends into the clamps (and again, make sure not to bend or crease the mesh!). Try to get it to sit as evenly as possible — you can use the rows in the mesh to help you here. Tighten the screws down and you should have a perfectly curved piece of mesh installed on the build deck.

Take your piece of agleted cotton and carefully thread it under the mesh. Press down on the spring loaded center block with the cotton as this will make it easier to thread through. Do this while being careful not to bend the mesh at all. With your cotton threaded through, give it a good combing and fluffing and you’re ready to cut your wicks to size.

Cutting the wicks right can be a little bit tricky so do it one side at a time. This way if you cut it too short you can pull through some more length. You’ll want to cut your cotton so that it just reaches the base of the wicking ports. Stuff and spread your cotton into the wicking channels and tuck them in neatly so that nothing is sticking outside of the ports. Voila! That’s all there is to it. 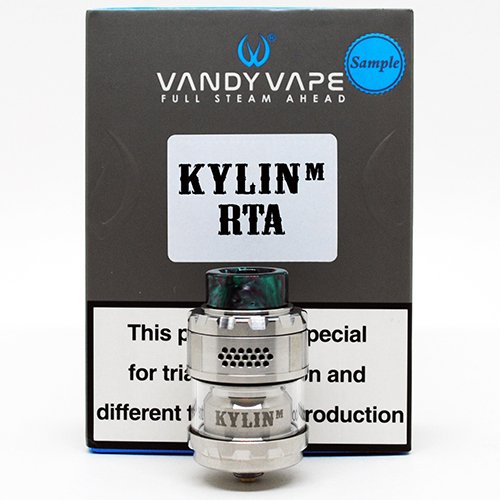 When I first got the Kylin M, I was super excited. The previous Kylin tanks were all excellent flavor RTAs and so I expected this one to be no different. Unfortunately, the Kylin M falls short of its predecessors and it’s probably got a lot to do with the top airflow configuration. Don’t get me wrong; it’s not terrible flavor RTA. It just isn’t top-notch and certainly not what I expected from a tank bearing the Kylin name.

The 0.20ohm “honeycomb” mesh coil was the worse of the two included coils. It worked best at 40-50W but just didn’t deliver great flavor. I was getting very muted vapor and I just wasn’t able to taste what I would usually taste with my favorite ejuices.

The 0.15ohm fine mesh coil at 55-60W was definitely the better of the two. The flavor I got off this coil was much better than the 0.20ohm coil although it still wasn’t excellent. With this coil the Kylin M falls somewhere in the average range of flavor RTAs; it’s not anything special but it’s also not bad.

Wicking was good and I didn’t have a single issue with dry hits. I took hits back to back and it wicked beautifully throughout. If you’re having issues with dry hits it’s most likely a problem with your build. Be sure that the mesh isn’t bent and ensure that your cotton is making full contact with the coil.

The Kylin M is a beautiful tank. It’s well made and the build deck is super easy to build on but it sadly falls short in the flavor department. Everything else about this tank was so good that I was hoping it would be a contender for the best RTA of 2019 but that’s sadly not the case.

The 0.20ohm coil just isn’t good while the 0.15ohm coil only performs at an average level. This probably has a lot to do with the top airflow setup as the previous Kylin tanks were all bottom airflow and delivered excellent flavor. Hopefully the next Kylin will stick to its bottom airflow roots.

What are your thoughts on the Kylin M? Let me know down below.