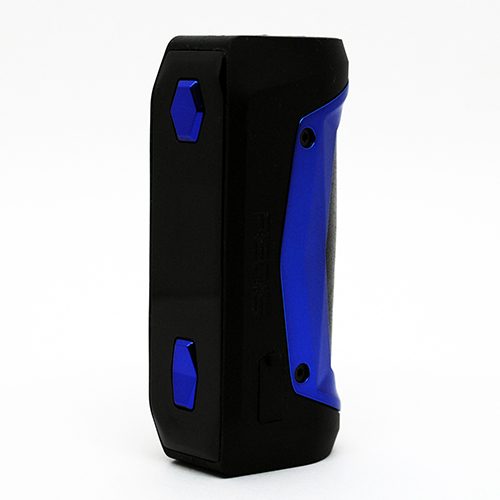 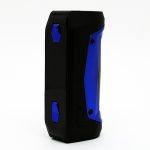 The Aegis Solo is the latest waterproof, dustproof and nearly indestructible mod from Geekvape. It’s a follow up to the larger, dual battery Aegis Legend and looks nearly identical to the Aegis Mini. However, while the Aegis Solo and Aegis Mini look alike, there are some key differences.

Leaving the comparison aside, how does the Aegis Solo stack up to other single battery mods on the market? I’ve been using it for a few weeks now to find out and so far it’s been a great mod. How good? You’ll have to read the rest of this review to find out!

This item was sent to me by MyVpro for review. This does not in any way affect my opinion or rating of the device. 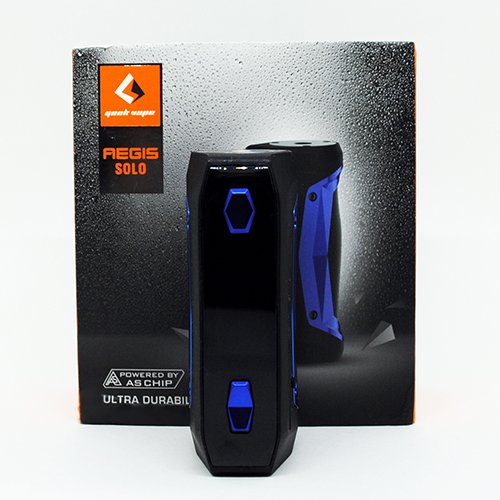 At just 85mm tall, 31.5mm wide and 41.2mm deep the Aegis Solo is a small mod. It fits nicely in my hand and I can palm it quite comfortably. It’s also very light; the Aegis Solo weighs just 112.5 grams. For comparison, the Aegis Legend is nearly double the weight at 203.5 grams.

I was a big fan of the design of the Aegis Legend and the Aegis Solo looks more or less the same, just miniaturized. It’s got rubberized sides and a metal band that goes around a small leather-like patch. Geekvape is inscribed on one side of the mod and Aegis on the other.

All of the color variations of the Aegis Solo will have a black rubberized exterior, however the color of the metal band and buttons will be different. I myself got the blue color for this review and it’s a nice, dark blue that looks really neat.

This mod feels solid to hold. The rubber isn’t too squishy but is rather firm. There’s no rattling of any sort and everything is very well built. I haven’t had any fading of the color on the metal band, so the paint seems to be good quality. I also haven’t had any real scratches or scuffs on the rubber or leather. I could tell that this mod was going to be able to withstand some heavy abuse before I even subjected it to the durability tests (which I’ll get into a little later). 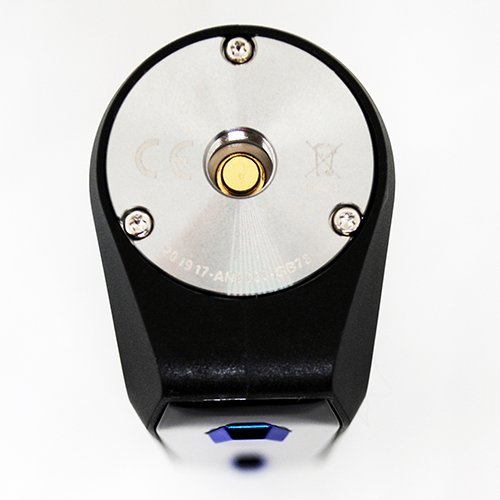 The Aegis Solo can hold up to 26mm tanks without any overhang. The 510 plate isn’t centered but because of how tiny this mod is, your atomizers don’t sit too far forward and are just off center. The plate is flat and flush with the top of the mod and the spring-loaded connection works nicely — I had no gaps with any of the atomizers I used and they all sat flush atop the mod.

The Aegis Solo has three buttons: one diamond shaped firing button and two connected adjustment buttons. The firing button is comfortable to fire with either your thumb or your index finger depending on how you hold the mod. It’s a nice size and has a good clickiness to it. I haven’t had it fire accidentally in my pocket or even when holding the mod so it’s well calibrated. The adjustment buttons also take the same amount of pressure to use and have a soft but nice click to them.

The screen is black and white, not color like on the Aegis Legend, but I don’t think that this is too big of a deal. It does however have the same UI layout as on the Aegis legend. It’s integrated into the front face of the mod underneath a plate of plastic. This plastic scratches quite easily; after my first day or two I already had a couple of deep scratches. I have no idea how it happened either.

On a positive note, the screen is easy to read in all situations because you have the option to adjust the brightness. Hold the power button and adjustment buttons to do so. 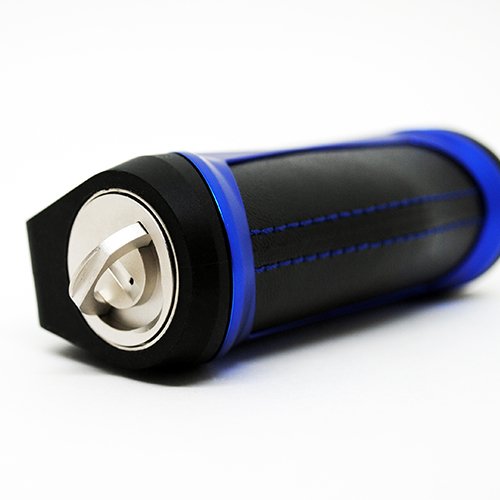 The battery cap has a small handle on it that is stiff at first, but it loosens up a little with use. It doesn’t loosen up to the point where it’s floppy, though. There’s a rubber ring on the battery cap, above the threading for the waterproofing. Even with an 18650 battery installed there’s no rattling. The battery fits in nice and snug.

There’s also a rubber plug over the micro-USB port for waterproofing. It fits nice and tight as well. The box also comes with an extra plug if you happen to lose or damage the first one.

Powered by a single 18650 battery, the Aegis Solo will fire at up to 100W in Power Mode (20W more than the Aegis Mini). It will also do from 200-600°F in Temperature Control Mode. It comes with TC support for your typical materials (SS, NI200 & Ti) but you also have the option of TCR. Pretty standard but it does have a full set of modes.

VPC is the mode that I really like because it lets you configure a wattage curve with up to 5 different wattages. For example, I set mine to 35, 40, 45, 40, 35. This means that when I took a draw the wattage increased from 35 to 40, then up to 45 before decreasing back to 40 and lastly 35. If you like a harder hit you can ramp up to it, or if you want it to get weaker with a longer draw you can have it taper down. It’s really a neat feature and it works flawlessly. No complaints from me!

The UI on the Aegis Solo is just like the Aegis Legend. Your mode and the Wattage is at the top. You then have a battery life indicator, coil resistance, amperage, voltage and a puff counter.

This made it a little frustrating when I was only trying to change the wattage by 5-10 watts because I would always overshoot if I held the button. I ended up having to hold the button for a brief second at a time to scroll in 1 watt increments. Not a deal breaker but it’s worth mentioning.

To lock the device you hold both adjustment buttons at the same time. Note: this doesn’t lock the fire button.

To test out the water resistance I took the Aegis Solo and dropped it into a barrel of fresh water that was about 4 feet deep. I left the battery in and the device powered on and let it sit for about 20 minutes. I removed the device from the water and… It was still working! I had no doubts that it would, based on how resilient the Aegis Legend was. The device was still powered on and worked as if nothing had ever happened. No water got into the Micro-USB port so the rubber plug seems like it did its job. I also removed the battery compartment and no water had gotten in there either— all good news for anyone concerned about the water resistance.

For durability testing I tossed the Aegis Solo mod around and let it hit the ground. I dropped it onto pavement, concrete and wood flooring from varying heights. After each drop I checked the device to see if it was still functioning. Aside from some scratches and scrapes on the rubber, metal band and leather though, it survived all the drops without a hitch. The screen didn’t even crack which is pretty incredible. It still powered on and vaped without an issue so I can say pretty confidently that you don’t have to worry about dropping this mod. I also checked the battery for any damage but it was still in perfect shape. Nice.

While I didn’t try running the Aegis Solo over with my car like I’ve seen a few people do, I have no doubt that it would have survived that, too. 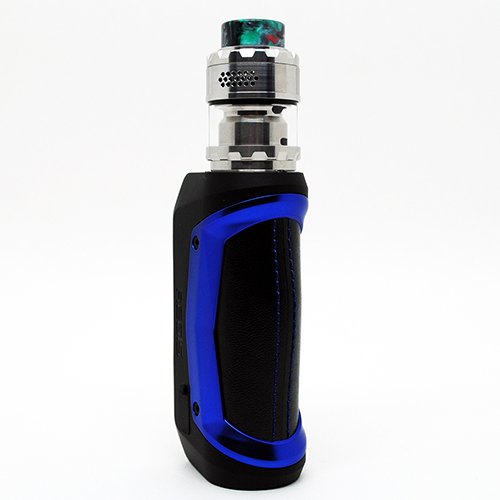 For a single battery mod the Aegis Solo is very good. It’s a no-frills vape mod that proved to be simple, reliable and efficient for wattages up to 60W. Although it can go up to 100W, I don’t think that it truly reaches the said wattage. Plus, vaping it anywhere higher than 60W will drain the battery considerably fast.

I mainly used the Aegis Solo with Wattage Mode and VPC. In Wattage Mode it performs great around 40-60W and lasted me a full day of heavy usage with battery life left over. I’m particularly a fan of the VPC mode and it works great on this mod. Setting your wattage curve provides more customization in your draw and allows you to ramp up or taper down your wattage depending on how you like to vape. With the ability to set up to 5 different wattages per draw, you can have a lot of fun finding what you like.

Firing speed is nuts with this mod. The second that you hit the fire button, the Aegis Solo fires. It’s almost too quick! There’s literally zero delay between when you press the button and it firing.

I liked being able to adjust the brightness by holding down the power button and adjustment buttons. If I was in a darker environment I would turn the brightness down and save myself some battery. If it was super bright, like when outdoors, I just turned it all the way up. It’s easy to adjust and a convenient feature to have.

Should you get the Aegis Solo? That depends. If you’re planning on running builds that require wattages up to 75W, then I would say yes. The only real con to this device is how fast the wattage scrolls and the maximum 100W output. Aside from these minor inconveniences, the rest of the mod is super. It’s small, compact, efficient and reliable — there’s not much more you could want from a single battery mod.

Plus the water and shock resistance are awesome. You’re not going to break this mod with normal use. To break it you’ll have to try really, really hard. Even then, I’m not sure what it would take! It passed the water and durability testing with flying colors and is certainly as indestructible as a vape mod can get.

What are your thoughts on the Aegis Solo? Let me know by dropping a comment!