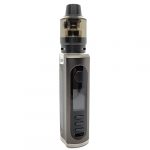 Lost Vape released the single battery Grus mod late last year and it turned out to be an excellent mod. Now in 2021 they’ve re-released the Grus with an upgraded Quest 2.0 chipset. It’s essentially the same mod, at least as far as the design is concerned, but the new chipset should mean even better performance. The performance was excellent to begin with so it will be interesting to see how this new Grus performs.

Unfortunately, the new Grus V2 is not sold by itself and only comes as part of a kit. This kit includes the new UB Pro Tank and two coils. For those of you unfamiliar with the Grus, the V2 will fire up to 100W and takes a single 21700, 20700, or 18650 battery. It has power, bypass, variable voltage, power curves, and TC modes for nickel, titanium, SS316, and SS904.

Is it worth buying the kit to get the Grus V2? You’ll find out in this review. 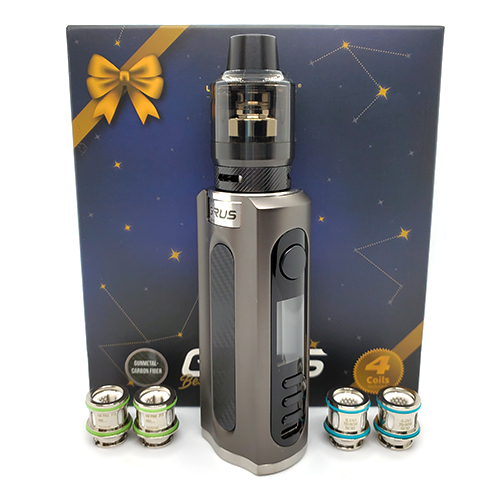 The Grus V2 is a really nice mod. The body is made of zinc alloy and features rounded edges and flowing curves that give it character and set it apart from traditional “boxy” mods. Each side of the Grus V2 features an inlaid panel. On my unit it’s a matte 2×2 weave carbon fiber panel and it accents the gunmetal body nicely. The minimalist design here is spot on. I’ve seen and used a lot of mods but this is hands-down one of the best looking box mods out there.

The build quality is also spot on. The Grus V2 just feels solid and the entire mod is extremely well built. The zinc alloy body feels strong and the flowing curves feel nice in my hand. For a single battery mod it does weigh quite a bit at 215g with the tank but this is the only thing that could possibly be a con for the design & build quality.

At the top of the Grus V2 is a huge stainless steel 510 plate which can hold tanks up to 30mm in diameter with no overhang. Lost Vape and Grus are printed on the sides of the 510 but that’s the only branding present on this mod. I think it looks classy.

The bottom of the Grus V2 is where the battery cap is located. It’s a circular cap with a fold out handle and the cap just unscrews from the bottom of the mod. The threading is smooth and screws in or out nicely. The cap also has 3 venting holes built into it which is always nice to see. The Grus V2 takes a 21700 or 20700 battery. You can also use an 18650 battery if you use the included adapter. With a battery installed there is absolutely no rattle or movement, even with an 18650 and the adapter.

The front of the Grus V2 has a large 0.96” color display. This display is bright and vibrant and, because this Grus uses the new Quest 2.0 chipset, the UI is different from the Grus V1. I’ll speak more about this in the next section. The fire button is large, round, and feels good. There are 3 adjustment buttons: up, down, and select. These buttons also feel good and are easy and intuitive to use.

The overall design and build of the Grus V2 are just as good as the original. Like I said, I think that it’s one of the best looking mods out there and the build quality is similarly among the best made mods. Bravo to Lost Vape. 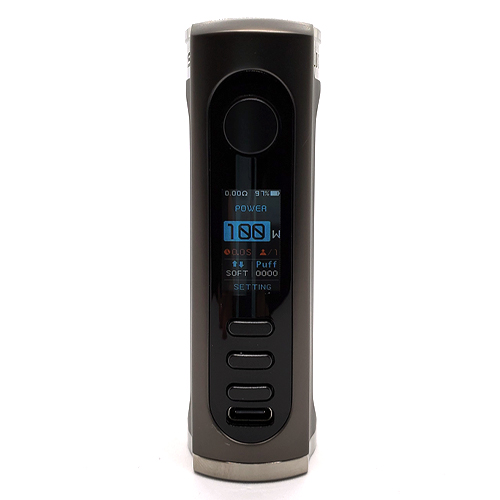 The biggest change on the Grus V2 is its use of the Quest 2.0 chipset. This chipset adds a few more modes to the Grus and also brings a new UI. This UI is more detailed and provides a lot more information about your setup. The screen displays your coil resistance, a battery life indicator with percentage, mode, wattage/temperature/voltage, puff time, user profile, and a puff counter. It’s a lot of information but the way that it’s laid out on the screen is organized and easy to read.

The modes available on the Grus V2 are power mode, variable voltage, bypass, power curves, and TC for nickel, titanium, SS316 and SS904. Unfortunately there is no TCR on the Grus which is one of the pitfalls of this mod.

At the bottom of the screen is a settings menu. This menu allows you to view your atomizer information and remeasure the coil resistance if it’s reading incorrectly. You can also change the wattage and temperature from this screen as well. Other options in the menu include screen brightness, UI color, and user profiles. The user profiles are neat because you can set a profile for wattage mode and a profile for TC and then all you have to do is click the profile icon and change it to the desired profile and it will change all of the settings. This could be useful if you want to use multiple RBA tanks.

The UB Pro Pod Tank is Lost Vape’s new tank that comes with the Grus V2 kit. The tank is made of plastic with a metal base and it uses an 810, removable drip tip. Paired with the Grus V2 it looks pretty good but it is a simple looking tank. It’s called the Pro Pod Tank because it fills up more like a pod than a tank; there’s a rubber stopper on the side of the tank that you simply open up to fill the tank. It’s a very convenient tank to fill as you don’t need to open or slide the top cap like on other vapes. The fill port seems secure too as I haven’t had any leaking from it.

Installing coils is a matter of unscrewing the plastic portion from the metal base and pushing in a new coil into the bottom of the tank. The threading here is good and smooth. The airflow control ring is adjustable and spins freely due to a lack of a stopper. There are three medium-sized airflow slots. 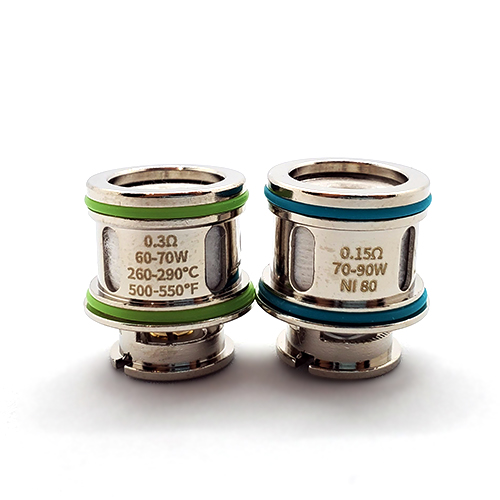 The kit comes with two coils: 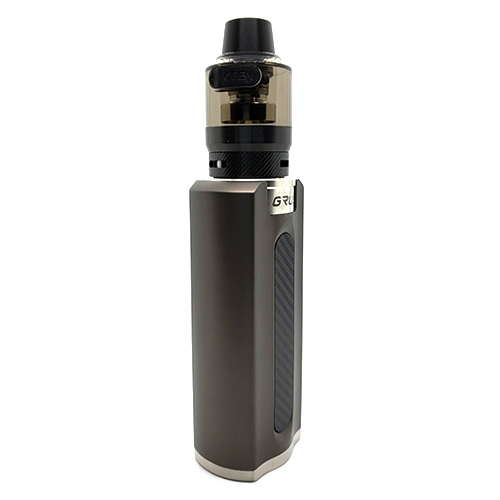 I’ll start off with the positives of this kit. First off, the Grus V2 is excellent. It performs as you would expect it to in power mode which is instantly firing and accurate wattage outputs. It detects and reads coil resistances correctly and the battery life is good when using a decent mAh 21700 battery, even vaping at 70W.

The Grus V2 is also a decent mod for temperature control vaping, provided you use one of the four preset materials. I tested the Grus V2 using the 0.3Ω SS904 stock coil and set the wattage to 70W. Anything below 500°F and you barely get any vapor. The real vaping happens from 520°F to 550°F though. I preferred staying at 520°F and the Grus V2 allowed long draws, but throttled down the power when it needed to in order to prevent dry hits. The throttling is just right and isn’t too aggressive or too lax. It’s definitely an enjoyable kit to use thanks to this TC coil. Flavor and vapor are surprisingly good from these coils considering the basic plastic tank that they’re used in.

The other 0.15Ω Ni80 coil has a wattage range of 70-90W. It’s a good wattage mode coil that I vaped with for over 1100 puffs before I noticed the flavor starting to drop off. 82W is where I found this coil performed the best and delivered the best flavor. Again, surprisingly good flavor and vapor from this coil.

Now for the negative points of this kit. One big one is the lack of TCR on the Grus V2. I was hoping that this would be added to this upgraded chipset because it was lacking from the original Grus, but sadly it wasn’t. This means that you can only use the four preset TC materials and nothing else which is disappointing. It also means that you can’t fine tune the TC if you find it too aggressive or too lax.

Okay, I can live with the lack of TCR. But the biggest problem with this kit is that the UB Pro Pod Tank leaked like crazy with the 0.3Ω coil. The first time I filled up the tank with this coil, I left it for 5 minutes to saturate and when I came back it had all leaked out the airflow holes. Coil was installed properly and tightly. The second time I filled it up only as much as I had to and it worked fine without leaking for a little, but later that day it again leaked out through the air flow slots. After that I continued to fill it up only as much as I needed to and so far it hasn’t leaked anywhere as severely as the first two times I filled it, but I still do get a bit of ejuice under the coil.

I had a much better experience with the 0.15Ω coil. It never leaked and emptied the entire tank but I have still experienced ejuice collecting in the base of the tank, under the coil.

The Grus V2 with the upgraded Quest 2.0 chipset is even better than the original, and that was already a great mod. I’m disappointed that it still doesn’t have TCR but perhaps this can be added in with a future update. Otherwise, it works great for wattage mode and temperature control mode and is overall a very solid mod.

While I do like the UB Pro Pod Tank because it’s simple to fill and delivers on flavor, the fact that the 0.3Ω TC coil leaked so much is unacceptable. It’s otherwise a great tank but this one fault is the one that’s going to define the tank for me.

The Grus V2 isn’t sold by itself and only sold as part of the kit but, even with the UB Pro Pod Tank leaking, I think that the mod with the upgraded chipset alone is worth the price of the kit.