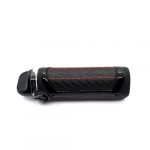 The SMOK IPX80 is SMOK’s newest rugged pod mod. Like the Scar P5, the IPX80 seems built to compete with Geekvape’s Aegis line of devices. It has a solid, rugged design that is IP67 water and dust resistant as well as shock/drop resistant. 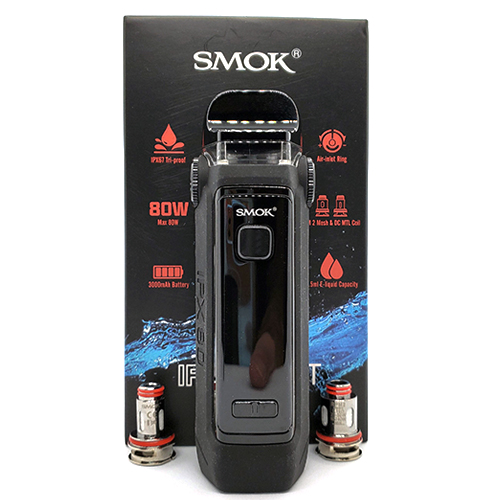 Just by looking at the IPX80 and its specs, you can tell that SMOK is trying to compete with the Geekvape Aegis Boost and Aegis Boost Plus. The IPX80 has what I like to call ‘your typical IP67 rated rugged design’: a silicone outer shell that spans the sides and bottom of the device, a grip pad, and a metal bezel that surrounds this grip pad. This design is what Geekvape have been doing with all of their Aegis mods and it’s a design that other companies have been quick to copy for their own IP67 rated mods.

The silicone shell is firm but it has some squishiness to it that feels nice. My hand comfortably wraps the device and my fingers naturally rest on the semi-firm grip pad. The pad on my Black Carbon Fiber unit is made of what looks to be carbon fiber material. It has two lines of red stitching that run vertically up the pad with a SMOK logo embossed between them. The rest of the device, including the bezel, is all black. There are 6 other colors available which are Grey, Blue, Brown, Red, Fluid 7-Color, and Fluid Black Grey.

The IPX80 is about the size of a regular single 18650 battery mod. It’s close in height to the Aegis Boost Plus but the oval shape is quite a bit girthier. It weighs 130g with the pod installed but it surprisingly doesn’t feel very heavy in my hand.

Like the Nord 4, the IPX80 has dual airflow adjustment dials. There’s a dial on each side of the device and these dials rotate to open or close the airflow. Rotating the dial counter-clockwise opens up the airflow, while rotating it clockwise closes down the airflow. The dials have ridges on the edges for grip but they’re very firm and hard to turn, especially straight out of the box. They loosen up a little as you use them but not very much. Although, I’ve found that once I found my preferred airflow setting, I didn’t really use the airflow adjustment afterwards and it will likely be the same story for you. 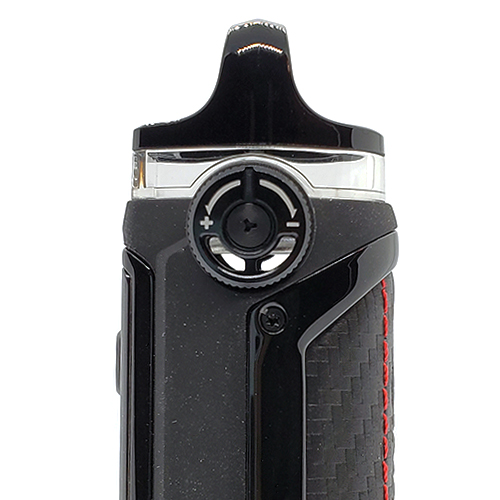 The front of the IPX80 has a square power button, a 0.96” color display, and two small square adjustment buttons. All of the buttons are firm and don’t rattle or move around. The buttons are easily activated when you want to use them, but not so easily pressed that they will fire from any little touch.

The display on the IPX80 is super nice. The screen is full color and bright. It appears to be under a piece of actual glass too, not plastic like many other devices. It could be plastic but if it is, it’s a solid piece that isn’t flimsy.

At the bottom is a Type-C charging port that is plugged by a rubber stopper to ensure that it’s waterproof. I prefer to be able to charge my devices standing up so that there’s no risk of the pod leaking out but this isn’t too big of a deal. I just remove my pod before I set it down to charge.

Overall the build quality of this device is excellent. The design isn’t exactly original but it looks good on this device. The IPX80 is going to lose some style points for the overplayed design but otherwise it gets good scores. 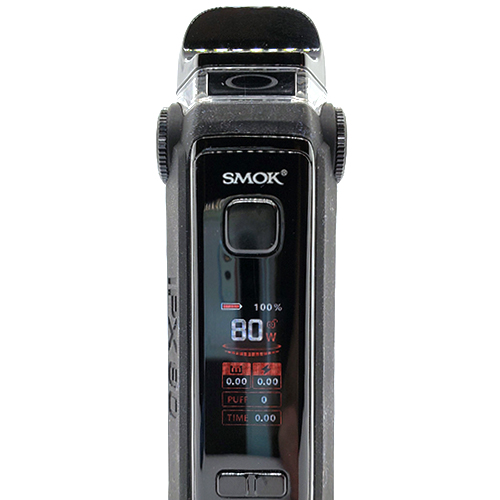 The IPX80 will, as the name suggests, fire up to 80W. We can also glean from the name that it’s IP rated, in this case at IP67. This means that it’s totally protected against dust, and protected against the effects of temporary water immersion up to 1m of fresh water for up to 30 minutes. While not part of the IP rating, the IPX80 is also marketed as shock and drop resistant.

I really like the screen on this device. It’s tall and in full color and it just looks really nice. At the top of the screen is a battery life indicator complete with percent. The set wattage is in big numbers in the middle of the screen, followed by the coil resistance, voltage, a puff counter, and puff time.

The color of the screen can be changed by pressing the fire button and + adjustment button simultaneously. This changes the UI color to either white, blue, green, red, yellow, or purple.

There’s no menu or settings screen on the IPX80. It’s a wattage mode only device and therefore it’s perfectly straightforward to use. New vapers won’t have an issue operating and using this device.

The pod on the IPX80 is a big one. It can hold up to 5.5ml of ejuice which, even with the 0.16Ω coil, should be more than enough ejuice to get you through at least the day. The pod has a black drip tip which is pretty thick and not the nicest on my lips. It just feels too big to be comfortable.

Aside from the black plastic drip tip, the rest of the pod is clear. The upper half of the pod remains visible even when inserted into the device so you can get an idea of if you’re running out of ejuice without having to remove the pod. If you can’t see your ejuice then you probably need to fill up. The fill port is located on the back side of the pod and plugged by a secure rubber plug.

The pod has 4 magnets on the bottom that attract strongly to the device and sit firmly in place. Once inserted there is no movement and you have to give the pod a good pull to disconnect it from the magnets.

Coils insert into the bottom of the pod by way of press fit. Two coils come included with the IPX80 kit:

Both coils can be used for regular nicotine eliquid, and from their resistance it seems like that’s what they’re best suited to. I suppose that you could a nicotine salt eliquid with the 0.6Ω MTL coil but it would have to be very low strength like less than 20mg for sure. I personally did not use nicotine salts with the IPX80 and I would suggest that you stick to regular nicotine ejuices with this device. There are dedicated devices for nicotine salts if that’s the type of ejuice that you want to vape. This RPM2 pod is also compatible with other RPM2 coils. 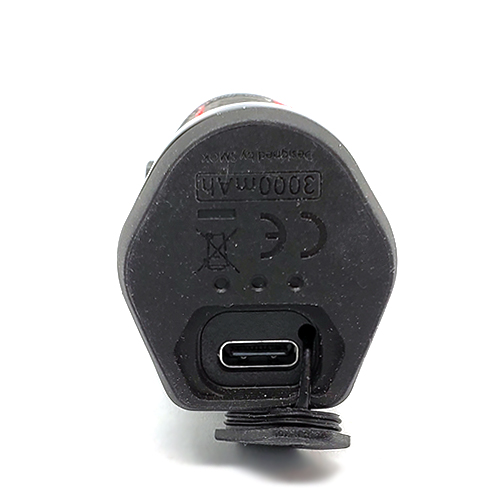 A highlight spec of the IPX80 is its 3000mAh battery. I say that it’s a highlight because the battery lasts for a reasonable amount of time, even when using the 0.16Ω coil. In my case, I vaped for 2-3 full days from a full charge when using the 0.16Ω coil at 40W. This ended up being around 270 puffs every time. The 0.6Ω coil allowed the battery to last even longer because it requires much lower wattage. Vaping at 20W I got 500+ puffs.

On the other end of things, the time that it takes to charge this device is lengthy. It takes almost 2 hours to fully charge the IPX80 which is strange considering that it uses Type-C charging. I get that it has a 3000mAh battery but I would expect quicker charging times than this. 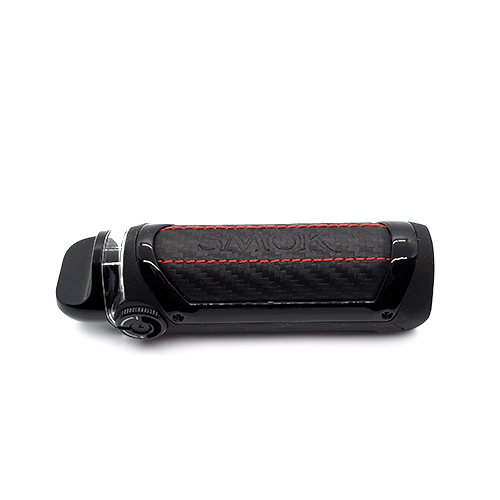 I started off using the IPX80 with the 0.16Ω coil. This is a mesh coil with a wattage range of 25-50W so I filled it up, waited 5 minutes, and went straight to 40W which is the recommended ‘best’ wattage. This coil is a direct lung coil no matter how you set the airflow. Even with the airflow fully closed, it’s at best a slightly restricted direct lung hit. To talk about the flavor, it’s impressive. The vapor is really tasty and nice and warm at 40W. For a pod mod the IPX80 does well in the flavor department with this coil. I used a 70VG ejuice with this coil.

As for the 0.6Ω coil, it’s also quite flavorful but not on the same level as the 0.16Ω coil. Close but not as good. My issue with this coil is that it’s marketed as a MTL coil but there’s no way to get a good MTL draw with the airflow on the IPX80. At best it’s a restricted direct lung draw but in no way can I call it MTL. I used a 70VG ejuice with this coil at 20W. Good flavor and the vapor is warm too but don’t expect a true, tight MTL draw or you’re going to be disappointed.

I have had some minor leaking from both coils. Small amounts of ejuice have collected in the battery section, underneath the pod, but thankfully nothing major. I made sure to take out the pod and clean out the battery every other day or so just to be sure that it wouldn’t seep into the device.

As a direct lung pod mod the IPX80 performs very well. The design looks good but I think that it’s a design that’s been overused and it’s not original at all. However, the build quality is excellent and it feels like a rock solid device. The buttons are firm, the screen is beautiful, and it’s comfortable to hold.

On the performance side of things the IPX80 is great but only as a DL device. The 0.6Ω coil is marketed as being for MTL but in my experience that’s just not possible to do with the airflow setup here. Flavor from both coils is good, but they both leaked a little bit of ejuice so you gotta be sure to check under the pod every other day at least and clean up anything that has leaked out. No major leaking, but enough for me to worry about it seeping into the battery.

Overall, I really liked using the SMOK IPX80 for my regular nicotine ejuices. The battery lasts for a long time no matter which coil you use and that’s a strong point of this kit.