Wotofo Troll X RTA Review: The Return of a Classic 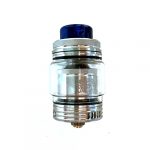 In a time when the vape market is saturated with pods and AIO devices, it’s really exciting to be given the opportunity to review a new rebuildable RTA! Even more so when it’s the follow up to one of your first owned and loved.

Wotofo is a company that has consistently released quality products for as long as I can remember. Most recently I had the pleasure of reviewing their Manik Pod kit which I really liked but what I love are rebuildable RTA’s and RDA’s because I’m a hobbyist vaper through and through.

In 2017 Wotofo released the original Troll RTA and for a time it was my absolute go to RTA, so you can imagine my excitement at the prospect of reviewing Wotofo’s brand new version X. Let’s see if it lives up to the name! Also, thank you to Wotofo for sending this over for review. 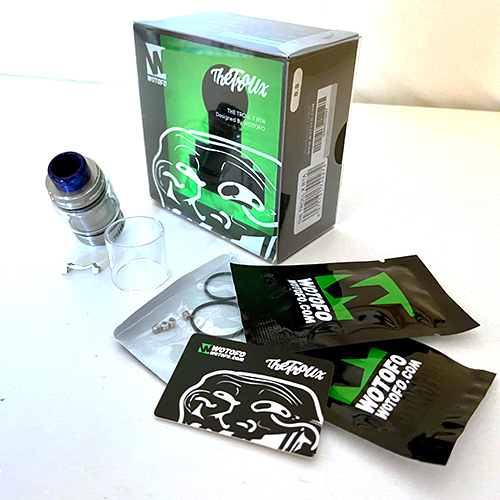 Wotofo are normally great on the build quality front and the Troll X is no exception. All the threading and machining feels buttery smooth and very well presented. The X is available in six different colours: Black; Silver; Gunmetal; Blue; Gold; Rainbow. All are provided with accented resin drip tips of various colours and overall I love the look of the X but… Let’s not get too far ahead. As usual I will go from top to bottom and take a look at all the details.

The drip tip provided is a nicely rounded edged version of the resin variety. Not too long but not short either and it feels very comfortable in the mouth, as opposed to some of the very wide bore ones we have seen before.

Filling of the X is down to a slide mechanism… WHY WOTOFO? Not to be overly dramatic here but those that have read my previous reviews will know that I really do not like slide to fill systems. I won’t harp on about why but in my experience they just don’t have the integrity to last.

The fill cap does have some really nicely machined knurling around the cap. It can be unscrewed for cleaning and there’s a nice rubber valve style fill port. Where to slide the top cap open from is not clearly marked. There is a very small, almost invisible arrow but I personally found it almost impossible to see and when I needed to refill I just ended up fumbling my way around the cap until it opened. My other gripe with it would be that it doesn’t slide open very far, meaning that those big 120ml gorilla bottles can be a bit tough to fit and in some cases you will need to remove the drip tip.

Looking at the condensed size of the chimney told me right away that the flavour would be great. The classic Troll logo has remained but it’s etched into the chimney which I really like. Nice and subtle — I’m not the biggest fan of branding so this was pleasing to me.

Airflow is a dual sided affair with horizontal slots and again some knurling is present to help with the grip needed in order to slide it round. There aren’t many intricacies to the outside airflow but the adjustment really comes from the included inserts for under the deck. 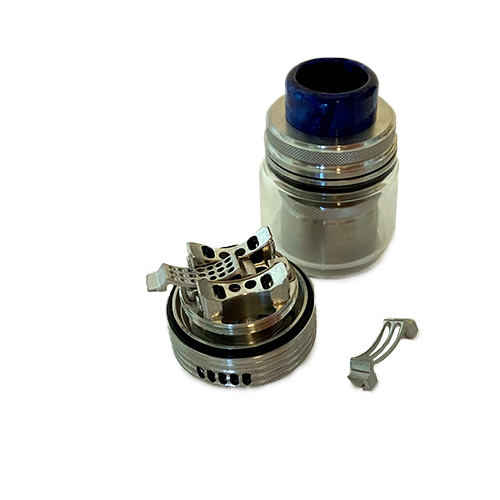 The Troll X deck is a post-less one; airflow comes up from directly underneath your coils and features a slot system for changing your airflow plate. It comes with two options: one has two elongated wide open slots and the second is a honeycomb insert for those that prefer a restricted/single coil setup. They slide in nicely and have good tolerances.

In testing I liked both inserts; it’s not a wide open 10/10 airflow with either. There is a touch of resistance there which I’m a big fan of. Personal preference for me was actually a single coil with the honeycomb but we will get to why later. For your cotton legs, the deck sits on a GTA style platform allowing the liquid to access from underneath the deck.

Last but not least the 510 pin is protruding enough to use the X on a hybrid safe connection should you wish to do so. Just ensure you know your ohm’s law and practice proper battery safety before using a mechanical device please.

How to Build on the Troll X RTA 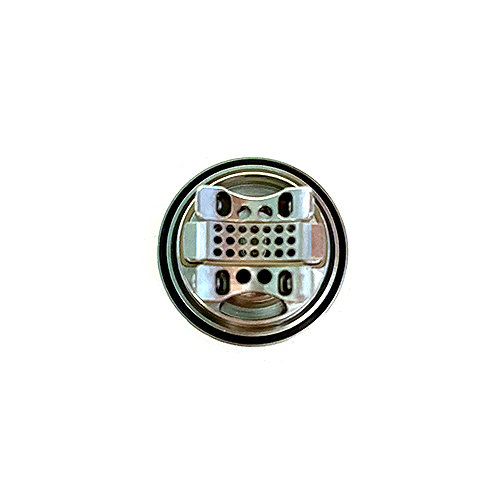 There really isn’t anything too difficult about the coil installation on the X. It’s a postless deck and coils slip in very easily. Wotofo recommends trimming your wires to 6mm with the included coil tool, however I really found 5mm to be better when using dual coils. The reason being is that the X having a post-less deck means that it keeps your coils relatively high, which in turn means that it also relies very heavily on capillary action to soak up your e-liquid. Installing coils a little lower equals less cotton which ultimately means less need for capillary action and thus less of a chance of dry hits.

For a single coil build the legs do need to stretch a little further so I found 6mm perfect. The airflow inserts are fairly easy to replace even with a build installed although this can get messy so I would advise placing before you build.

This is where the Troll X can be a little tricky! Not impossible by any means but not as forgiving as most RTA’s these days. The wick is doing a lot of work in the X and it has a fair way to travel. Couple this with the possibility of over thinning the wick and it’s probably going to dump all its liquid out of the airflow. It’s an extremely fine line with the X.

Take your time on the wicking. You want the cotton to be snug but not too tight and you want some thinning action going on. When you place the cotton in the wells it needs to be just barely showing beneath the GTA style platform and you want to ensure that the well is filled but not overstuffed or compacted.

As I said before, there are many RTA’s these days that are extremely forgiving when it comes to wicking but the Troll X is just not one of them. If your wicking doesn’t work at first, persevere because the payoff is fantastic flavour when it does. 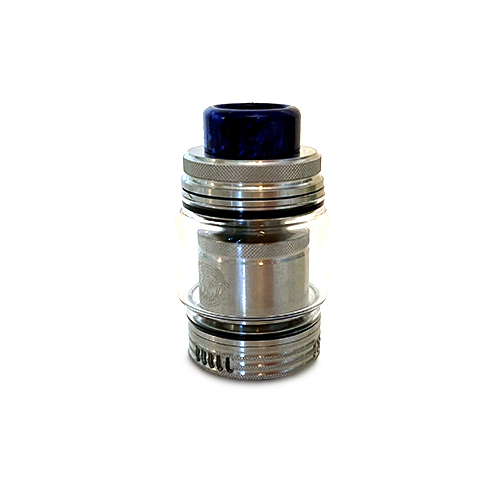 Once you get the wicking down you are in for a treat!

The Troll X really shines in its performance. Yes I really dislike the top fill, yes it’s hard to open due to an almost invisible arrow but… This tank performs to a great level. The airflow inserts differ and offer a good level of dialing in how you want it to vape.

On beginning this review I really thought that I would love the straight up, open airflow with a dual coil set up because that’s how I liked the original. The truth is, it really does offer a nice lower level of restriction this way. However rocking the X with a single 4mm ID coil and the honeycomb airflow is tremendous! E-liquid lasts longer, and lower wattage means I can happily sit it on top of a single 21700 battery mod so actually, this is the way I like it the most.

Flavour is amazing whichever way you choose to vape it, although I felt as though it was ever so slightly improved when using the honeycomb insert and gaining that little bit more restriction. You are always going to get good flavour from an under-coil airflow but the Troll X is also very smooth, not overly loud and produces a nice dense and saturated vape.

Wotofo’s Troll X RTA did not disappoint me. It can be a difficult one to get right when it comes to wicking but the performance is up right up there with my favourite tanks. I really don’t have too many cons here; aesthetically it looks great, the build quality is on point and it vapes beautifully.

I just don’t, and never will, like slide fill mechanisms and especially one that doesn’t easily allow you to fill from bigger bottles. The fill port arrow is also so hard to see that they might as well have not bothered. These issues are the only thing I dislike about the X. Is it enough to stop me using it? No, but it could have been so much better with a quarter turn fill system, Wotofo.