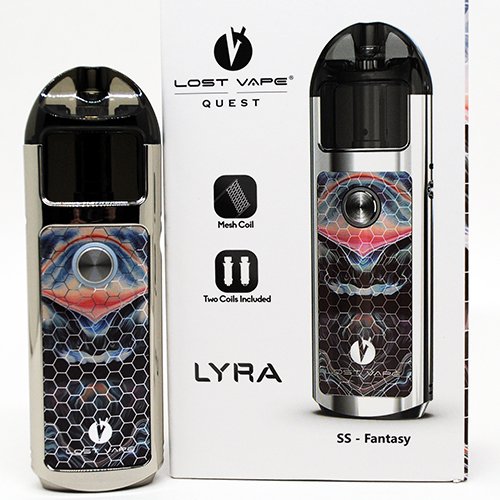 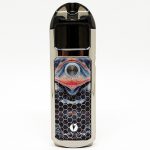 The Lyra is the latest offering from Lost Vape, the same company behind the Orion line of devices. It’s a pod style device that uses replaceable coils and it comes with one coil for “regular” nicotine ejuices as well as a coil for nicotine salts. It’s got three power levels that fire at different wattages depending on the coil that is being used, a 1000mAh battery, and a 2ml refillable pod.

Is the Lyra worth your money? Read on to find out.

This device was sent to me by EightVape for review. 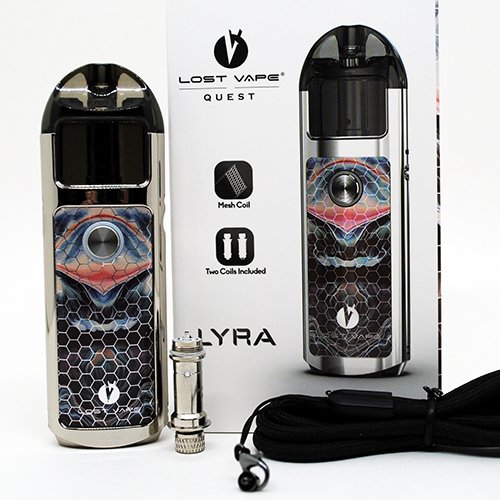 The Lyra is a nice looking mod. The body is made out of zinc alloy and there are decorative panels on the front and back of the device. The color that I’m using for testing, “SS – Fantasy”, looks super cool. It’s a serene mix of colors resembling a landscape with a hexagon grid overlay. It’s everything that I would expect from Lost Vape; craftsmanship and quality.

The other colors come with resin-like panels but they’re not actually made with real resin; they’re simply plastic panels made to look like resin. I can’t knock them though because they still look and feel good. The Lyra also comes with faux leather panels but those aren’t really my style.

The Lyra is a comfortable mod to hold. It has an oval shape with rounded sides that I can almost completely conceal in my hand. It is about 96mm tall, 30mm wide and 15.8mm deep. It weighs 79g with the pod and feels solid and well-constructed. It isn’t heavy but I can notice the weight in my hand.

There’s a single fire button and it’s responsive and clicky. The firing button is surrounded by an LED ring that lights up red, blue or green to indicate remaining battery life as well as the output mode.

The sides of the frame have venting holes for the battery at the bottom and airflow holes for the pod near the top. There’s also a spot to attach the included lanyard. The lanyard screws into a small hole that is hard to get it in, but once it’s attached it’s extremely secure.

The pod for the Lyra is a little different than what I’m used to. It’s got a cap on the pod covering the fill ports and coil. There are clips on the sides of the pod which have to be squeezed to release the cap. These clips are a little stiff but they hold the cap securely in place.

Taking the cap off gives access to two large fill ports that are plugged with rubber stoppers. The pod can be filled through either port but opening both gives the air somewhere to escape and makes filling a lot easier. The pod holds up to 2ml of eliquid.

There’s a dark tint on the pod but it’s not as dark as some other offenders. I still had to hold it up to the light to see my ejuice level though. The pod attaches magnetically to the battery and the magnets are strong but it still requires a push to get it fully seated. The pod will probably pop out if the Lyra is dropped.

There are two coils that come with the Lyra: a 0.6ohm mesh coil and a 1.2ohm “regular” coil. The 0.6ohm coil is for regular nicotine ejuices and the 1.2ohm coil for nicotine salt eliquids. The coils have a knurled grip to make it easier to screw them into the pod.

I have an issue with the coils though: the wicking holes are placed higher up than they should be. Because they aren’t at the bottom of the coil, I would always end up with a fair amount of ejuice remaining in the pod that couldn’t be wicked. Good thing I was paying attention, otherwise I would have burned my coil on the first day.

How to Use The Lost Vape Lyra

The Lyra has three output modes: green, blue & red. The wattage output of each mode depends on the coil that is being used: 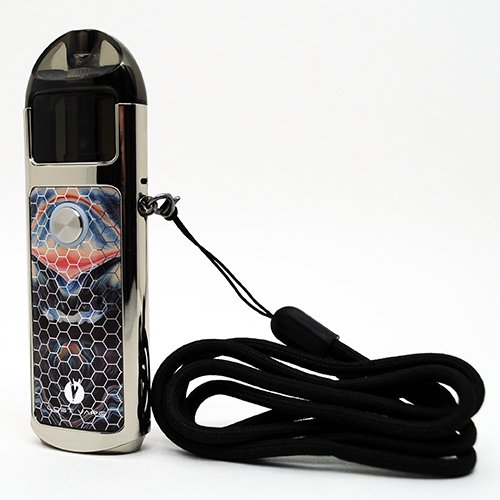 Battery life is good but nothing too exciting. I got a full pod and then some out of a full charge — about a day and a half of use. As the battery dies the draw gets weaker so I tended to recharge well before the Lyra was completely dead.

The LED ring indicates the battery level whenever the fire button is pressed. It lights up in the same colors are the output modes: green, blue or red.

Charging times are lengthier than most other pod vapes with similar sized batteries. I timed an hour and fifteen minutes for a full charge whereas other vapes average just about an hour. There’s no pass-thru charging either so I couldn’t vape on it while I waited. It sucks to be stuck waiting for a vape to charge! 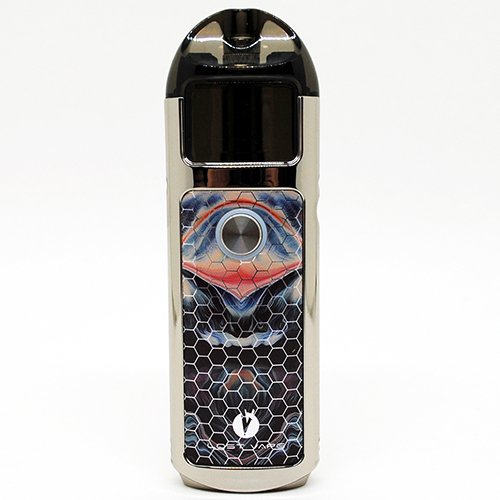 I’ve gone through a handful of refills with each coil and they’re still performing great. The flavor is still on point and, thanks to the secure pod design, I’ve had no leaking to speak of either.

Unlike a lot of recent pod devices, the Lyra doesn’t have adjustable airflow. The coils it comes with are made to deliver completely different vaping experiences though and that should be enough to satisfy most of you out there.

Starting with the 0.6ohm coil, it’s a DL draw with a touch of restriction. It’s an airy and open draw. I used a 70VG ejuice with 9mg of regular nicotine and then a 50/50 ejuice with 9mg of nicotine. The flavor is up there with this coil and its kept up with long draws flawlessly. The highest wattage output works the best and the vapor is warm but not hot.

I find the 1.2ohm coil delivers above average flavor but it’s not quite up to par with the other coil. I used a 50/50 nicotine salt in 35mg strength and the throat hit is spot-on. I keep the wattage output on low or medium for this coil and the warmth of the vapor is just right. This isn’t a “true MTL” coil but instead it delivers a loose MTL vape.

Even though the Lyra doesn’t have a way to alter the airflow, the coils deliver drastically different draws. This isn’t a device for tight MTL vapers but if you want either a loose DL or a loose MTL then you’ll like what the Lyra has to offer.

Flavor is a highlight of the Lyra; it’s considerably better than most other pod devices out there. The throat hit is wonderful with nicotine salts too and there are no performance issues to speak of. Whether you’re new to vaping or just looking for a new device, the Lyra is a good pick up.