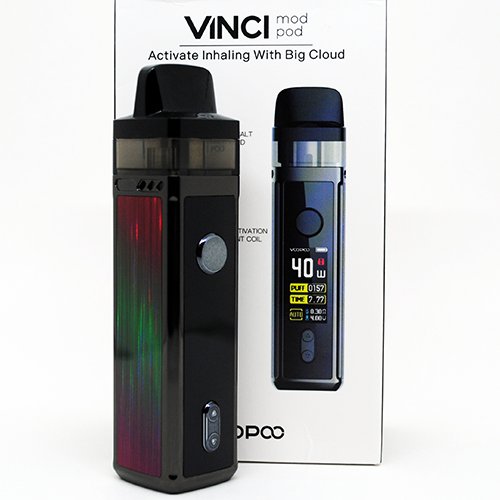 Voopoo have already released a few pod vapes this year like the Drag Nano and Find S Trio, both good vapes. Now they’ve come out with the Voopoo Vinci and it’s got a lot of people interested. Because while a lot of newer pod systems let you choose between three set wattage outputs, the Vinci delivers truly adjustable wattage from 5-40W.

The Vinci has a full color LED display, a 5.5ml pod that uses replaceable coils, and a 1500mAh battery. It also uses Voopoo’s new GENE.AI chipset and comes with “coil protection” as well as draw-activated and button activated firing.

Many vapers have been waiting for a variable wattage pod vape. But is the Vopoo Vinci worth your money? Keep reading to find out. 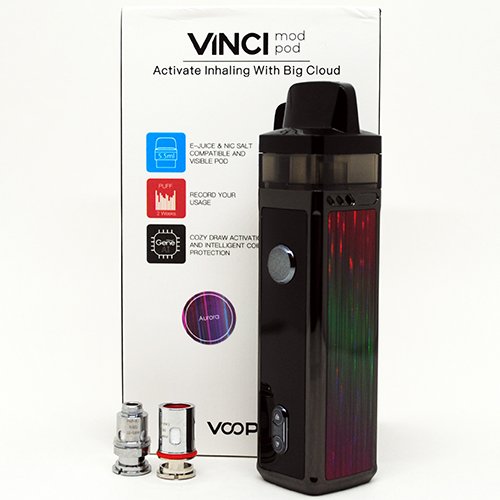 The Vinci is a cube shaped device with rounded edges. It’s a good looking device but it just feels bulky. It’s bigger and thicker than most other pod vapes and it has a fair bit of weight to it too. The boxy shape also feels weird but it isn’t uncomfortable to hold. Maybe just a bit awkward at first but I got used to it quickly. Like most of Voopoo’s products, the Vinci feels like a quality device.

You can pick up the Vinci with one of ten different panel designs. I’m using the Aurora panel which is a mix of pink, green, blue and red. The colors change when light hits the panel. The rest of the device is a gun-metal color that picks up fingerprints like crazy.

The panels are resistant to scratches but the body of the device isn’t. My Vinci is already scratched and scuffed and I’ve been nothing but gentle with it!

The back of the Vinci has the VOOPOO logo going down the middle and a small “Gene Chip Inside” logo at the bottom. On the front of the Vinci is a 0.96” LED screen and it’s clear, vibrant, and bright. It’s a full color screen that sits behind a sheet of plastic which will offer some protection if the device is dropped.

The Vinci has a circular firing button and two small adjustment buttons. They all feel solid and are firm and clicky.

How to Use The Voopoo Vinci 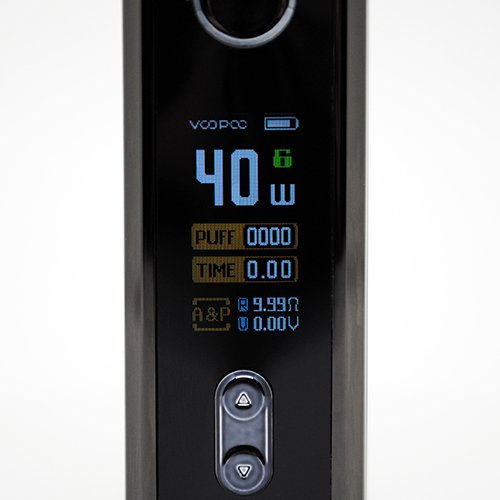 The Vinci has a lot more going on than most pod vapes. The wattage can be set using the adjustment buttons and it can fire from 5-40W— kind of. Only the 0.30ohm coil allows you to adjust the Vinci up to 40W; the 0.80ohm coil doesn’t let you go any higher than 18W. This is for the best though because any higher would likely end up burning the coil.

When you insert the pod the Vinci will automatically set the wattage to the lowest range of the coil. It also does this if the device goes to sleep; it got annoying having to turn the wattage back up whenever I left the device for too long.

There’s a puff counter log on the Vinci that tracks your puffs each day. You’ll first have to set the time by holding all three buttons. The clock is in 24H format so take care to set the right time for an accurate puff counter. Hold both adjustment buttons to view your puffs per day.

The pod for the Vinci is big and shaped like a cube. It’s lightly tinted so it’s easy to see how much ejuice is in it. The pod attaches to the battery magnetically and is firmly held in place by four magnets, one on each corner of the pod. There’s no wiggle at all when the pod is seated in the battery.

The pod holds 5.5ml of eliquid and is filled through a side port. The port is plugged by a deep rubber stopper that holds in the ejuice. The fill port is large and fit all of my ejuice bottles easily. I also had no trouble filling the pod.

The Vinci comes with two coils. There’s a 0.30ohm mesh coil and a 0.80ohm dual coil. Each coil provides an airy draw but there is slightly more restriction with the 0.80ohm coil (more on this in the Airflow section).

If you’re planning on using regular nicotine ejuices then you can use either coil. 6mg ejuices vaped fine and gave a nice draw. But for nicotine salts I wouldn’t recommend using the 0.30ohm coil. Even with a 25mg salt at 32W it delivers far too much nicotine and isn’t a pleasant experience. The 0.80ohm coil was much better suited for salts although I wouldn’t vape anything higher than 35mg.

The pod are easy to install. They pressure fit into the base of the pod with no threading necessary. The fit also isn’t too tight so they can be removed easily when needed. 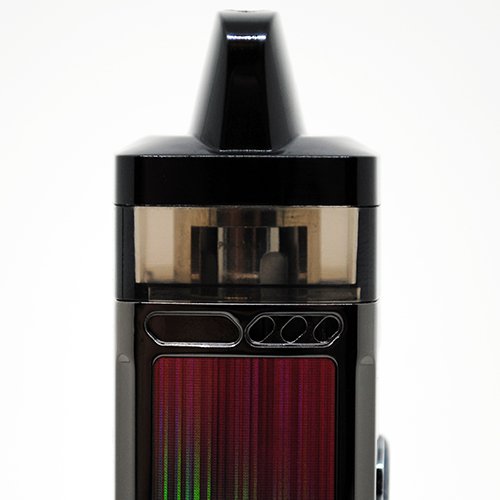 The airflow on the Vinci depends on the coil you use. It also depends on how you have the pod inserted into the device.

The 0.80ohm coil delivers closer to a MTL draw. But even with the pod inserted for closed airflow it’s only a loose MTL vape. With the airflow open I would consider it an airy MTL vape that is only slightly restricted. As someone who prefers a very tight draw with my pod devices I was hoping for a draw that was more restricted.

The Vinci has a 1500mAh battery and it’s been good to me while I’ve been using it. I got over a full day of use with the 0.8ohm coil and about a day with the 0.30ohm coil. That’s good considering that I vaped on the Vinci almost non-stop. With moderate use you can expect it to last even longer.

The Vinci charges through a micro-USB port on the bottom of the device. You can’t charge it standing up and have to lay it down on its side to plug in the cord.

The Vinci displays the battery percentage as it charges; a neat feature. Charge times are quick though! Using the included USB cable and a wall charger it took only one hour for the Vinci to reach 100%. 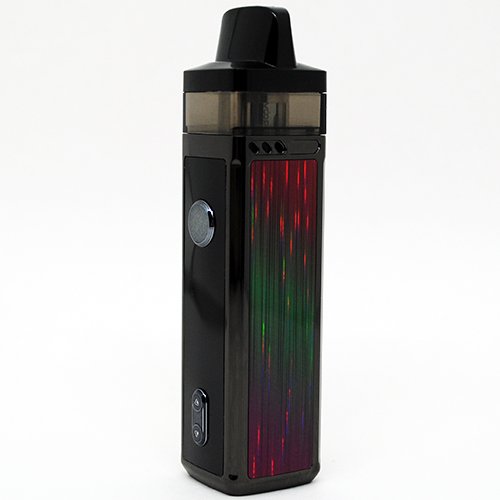 The Vinci is well designed and it’s awesome that it has a screen and variable wattage. Because it looked so good and had all the features I wanted I was hoping that it would perform superbly too. Unfortunately, although the flavor from the 0.30ohm coil is excellent, I had a host of issues that left me utterly frustrated and disappointed.

Bear in mind that I only had one of each coil to test so it’s possible that they both had quality defects. I can only go on what I experienced though.

Wicking was one issue. 80VG ejuices don’t wick well at all with the 0.30ohm coil and I tasted the verge of a dry hit any time I took a few puffs in a row. The same thing happened with long draws. Thinner eliquids didn’t give me this issue but that led me into another problem… Leaking.

It didn’t leak like a sieve or anything but after an hour or two I always had a pool of eliquid in the battery connection area and under the pod. It’s hard to clean it out too because of how this part of the battery is shaped. This happened with both coils. I got less leaking with the 80VG ejuice but it was still a significant amount. With 50/50 eliquids I might as well have poured it into the drain.

On top of the wicking and leaking (which may have contributed to this next issue), the Voopoo VInci would sometimes display “CHECK ATOMIZER” after cleaning and reseating the pod. The battery wouldn’t recognize the pod until I played around with the coil. Sometimes I had to rotate the coil in the pod to get it to read. Utterly frustrating.

Issues aside, the 0.30ohm coil is a really flavorful coil. It’s a pleasant and very warm vape at 35W so it sucks that I had all of these other problems. I can live with it struggling to wick high VG ejuices but the leaking and check atomizer problems are too much. If it didn’t give me so much trouble I would be hard pressed not to recommend the Vinci based on the flavor of this coil alone.

I experienced slightly muted flavor with the 0.80ohm coil but I liked the tighter draw. 15 watts is where it’s at with this coil for warm vapor and decent flavor. It’s not a bad coil (I would say it’s a smidge above average) but in comparison to the other coil it’s nowhere near as good.

I’m hoping that my coils had a manufacturing defect because almost everything else about this device is perfect. The draw could be tighter because that would almost certainly fix the auto draw not working but it’s an otherwise excellent device. The 0.30ohm coil delivers excellent flavor and the other coil isn’t too shabby either. If the coils didn’t leak this would be a prime choice for a pod vape.