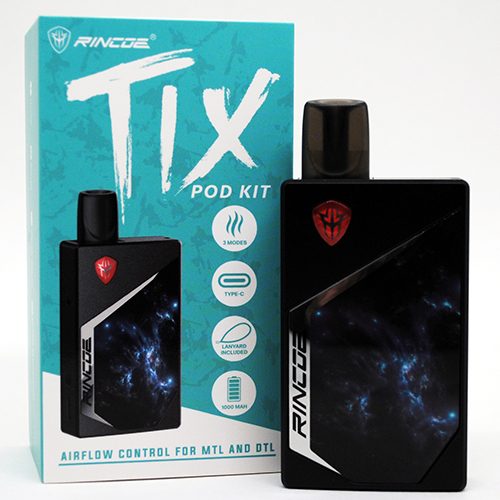 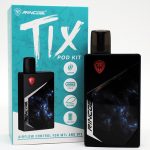 The Rincoe Tix is a small pod vape that’s just hit the market. It’s got nice looking IML panels that come in a multitude of designs. It packs a 1000mAh battery that recharges through a USB-C port, button-activated drawing and uses a 2ml pod with replaceable coils.

The Tix comes with both a 0.8ohm mesh coil and a 1.0ohm standard coil. It’s also got an adjustable airflow ring as well as three different wattage output levels. In my experience, adjustable airflow and wattage on a pod vape are awesome because you’re able to find just the right draw.

This device was sent to me for review directly from Rincoe. 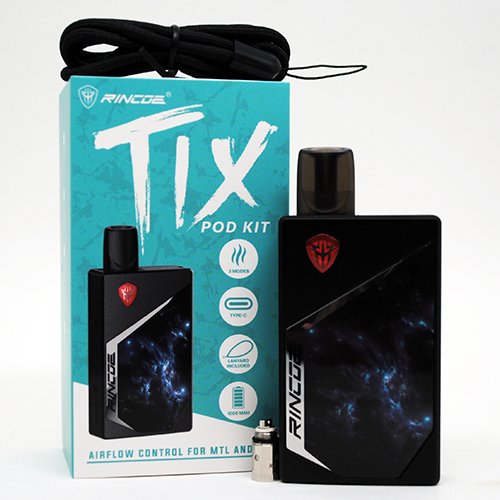 The specs of this device look good and the device itself looks even better! The Tix has a small boxy shape that is just 90.7mm tall, 43mm wide and 19mm thick. I like the small size a lot.

The body is made primarily out of zinc alloy. This material gives it quite a bit of weight but it feels very tough and durable. It also comes with a lanyard in the box but I haven’t really used it; the Tix is just too heavy to wear comfortably around your neck.

The front panel is made of IML plastic and comes in seven different designs. I received the “Galaxy” version and it’s probably the nicest one that they sell, at least in my opinion. The “Vast Sky” panel is pretty nice too though.

Just above the IML panel on the front of the device is a red badge-looking button. This is the power button and you have to press it in order to draw. There’s no draw-activated firing on the Tix.

The back of the Tix has a magnetic door that you must remove in order to access the pod. It uses strong magnets to stay attached and the door itself is quite sturdy. There’s just the tiniest amount of wiggle to it but only if you really try to move it. The battery door has “RINCOE” engraved into it and some design lines as well for a better grip.

On the side of the Tix there’s a single circular button and two LEDs. You can change the wattage output by pressing this button and the top LED will flash in one of three colors: red for low (3.3V), blue for medium (3.65V) and green for high (full power).

The Tix comes with a single pod and it uses replaceable coils. The mouthpiece on the pod is built-in and non-removable. It’s rather nice though and has a wide oval shape that is super comfortable to draw on.

To access the pod you have to remove the battery door from the back of the Tix. Then you can pull the pod out and adjust the airflow, change the coil or fill the pod. There’s a rubber plug on the side of the pod that pulls out to reveal the fill port. It’s a decently sized port so I had no trouble filling the pod. The Tix will hold up to 2ml of ejuice.

The Tix comes with two coils: a 0.8ohm mesh coil and a 1.0ohm round wire coil. The 0.8ohm coil is better suited for the airflow open and DTL hits while the 1.0ohm coil is meant to be used with the airflow restricted for a tighter MTL draw. I found that you can use either coil for whatever draw you like though and they both worked well for MTL vaping.

The wicking capabilities of both coils are also quite versatile. 50/50 up to 70VG/30PG ejuices worked just fine with either coil and they wicked optimally. Flavor also remained pretty much constant for my duration of using the coils and I used each coil heavily for around a week each. 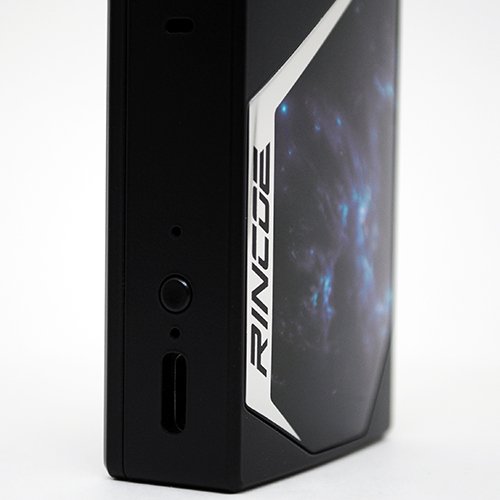 There’s a non-removable 1000mAh battery built-into the Tix. It’s not the largest battery capacity on paper but in practice it definitely lasts. Using the Tix at the medium (blue) or high (green) wattage output I was able to get two days of solid vaping which equated to around two full pods.

Just below the wattage adjustment button is a battery LED indicator. It lights up whenever you draw to indicate your current battery charge. There are three colors: red (5-15% battery), blue (15-50% battery) or green (50-100% battery).

There isn’t much difference in the power of the draw when the device is at blue or green battery but once it gets to the red I could definitely notice a power drop. Because of this I usually ended up charging my device before it completely died.

Charge times are extremely fast thanks to the USB-C charging. I clocked in around 40mins from the red power level to fully charged and that’s blazingly fast. There’s no place for Micro-USB anymore when USB-C charges so much quicker. Manufacturers, take note! 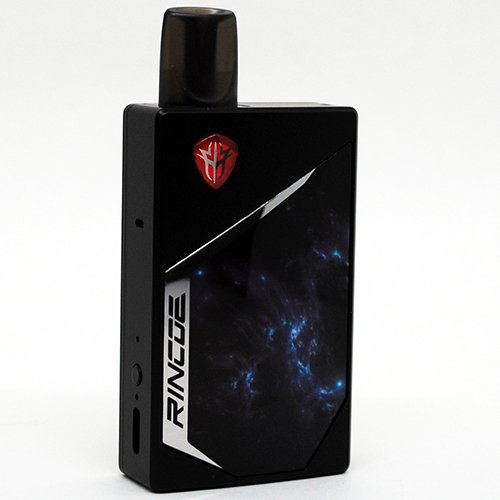 I started my testing with the 0.8ohm mesh coil. The red power level wasn’t providing enough of a draw so I upped it to the medium blue wattage output. This is where the Tix really started delivering good flavor and a great draw. I was able to get a direct lung draw with the airflow open while closing the airflow down gave me a nice tight MTL draw.

The 1.0ohm coil performs very similarly and there really isn’t much of a difference between the two coils. I didn’t find it to be any more restricted or open than the 0.8ohm coil. Flavor was also just about the same even though this is just a regular round wire coil as opposed to mesh.

The Tix works best at the medium (blue) or high (green) power levels, regardless of which coil you’re using. I just found the red to be too underpowered and not satisfying enough. The vape is always warm and gets increasingly warmer as you up the power and restrict the airflow. It was never hot though.

The draw that the Tix delivers is super satisfying when using nicotine salts. I used a 25mg nicotine salt and the throat-hit is great. It’s undoubtedly one of the best throat hits I’ve gotten from a pod vape.

I mentioned this before but it’s worth restating: the coils have great longevity. After a week of using each coil the flavor showed no sign of fading or decreasing. I’m sure you could use each of these coils for a week and a half easily, if not longer. 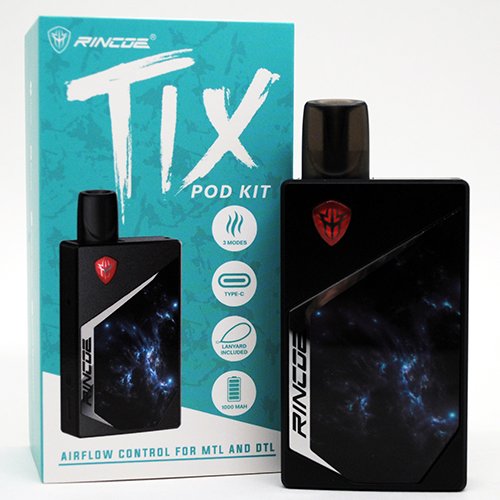 Rincoe have produced a great device here. The adjustable airflow has great variation in the open and closed settings and so do the wattage levels. The throat hit is also one of the best I’ve had from a pod vape recently. And to top it all off the battery life is excellent.

It’s a tad on the heavy side for its size but that’s something that I can look past. There isn’t really much negative to say about this device. So if you’re in the market for a new pod vape, I can confidently recommend that you get the Tix.