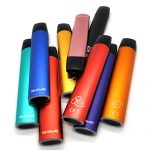 Disposable vapes don’t have to be cleaned, refilled, or maintained in any way. They come pre-filled with ejuice and all you have to do is open up the packaging and puff on the disposable. That’s all there is to it.

Shade disposables come prefilled with 1.7ml of 5% nic salt ejuice and have a few features that makes them stand out from other disposables. They have a large, ergonomic mouthpiece that makes them more comfortable and natural to use. They also have a metallic finish that is different and looks great too. 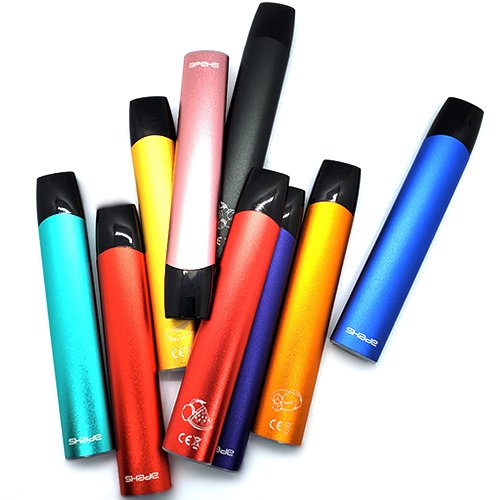 The body is also quite different from other disposables that are overwhelmingly boxy in shape. Shade disposables have an oval shaped body that is finished with bright, metallic paint. They’re not the most discreet device because the paint makes them quite eye-catching, however they do look good. The finish is nice and looks great.

These are standard size for a disposable — much smaller than most pod vapes, and much lighter too. You can easily carry a few of these in your sweater or jeans pockets and they won’t noticeably weigh you down. It’s convenient to carry a few different flavors at one time so you can always have flavor options.

On the front side of each Shade disposable you’ll find “SHADE” printed at the bottom. On the other side there are icons of fruits to let you know what flavor you’re vaping. The color of the body also corresponds with the flavor inside.

The bottom of the Shade has a bright LED ring that lights up when you take a puff. It’s not very noticeable during the day but in the dark you can’t miss it. If you’re not trying to attract attention you can always cover the LED when you take a draw.

For a small disposable there’s a surprising amount of ejuice in each of these. Each Shade is prefilled with 1.7ml of 5% (50mg) nicotine salt eliquid. This is the only strength they come in so they’re more suited to smokers trying to quit rather than casual vapers.

Build quality and longevity has been impressive. They’re very light and they’re disposable devices, so I can’t say that they feel premium. But they are well made and don’t feel like they’re going to fall apart. I especially like the mouthpiece as it’s very comfortable. The paint is also neat and looks very good. 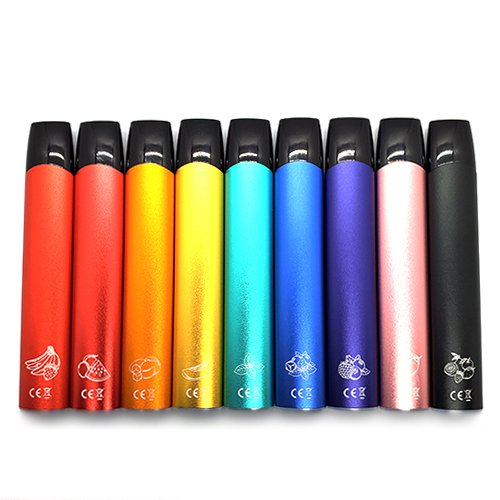 There are 9 flavors available for the Shade and I have all of them with me for this review. These flavors are: Peach Mango Watermelon, Strawberry Banana, Blue Razz, Pink Punch Lemonade, Melon Craze, Mystery, Mango Ice, Mojito, and Blue Slushy.

Some of these flavors are nothing new but a few sound interesting and unique like their Mojito flavor and their peculiar Mystery flavor. I’ll be going over each of these flavors and describing how they taste to the best of my ability.

This is a tried and true flavor that has become a staple for disposable brands. Shade’s take on this popular flavor combination is not unique, but it’s what I expect to taste from a Strawberry Banana vape. The banana is stronger and more upfront than the strawberry, however I can still taste both. It has a natural sweetness that is tasty and enjoyable to vape on.

This flavor would be more appropriately named if it didn’t have ‘Ice’ in the name at all. It’s really just a pure mango flavor with no cooling or menthol that I can taste. The mango flavor isn’t too strong but powerful enough that I can taste what it’s supposed to be. I can’t call it ‘natural’ but it does taste good. This is a perfect disposable for anyone who likes fruity flavors that aren’t too sweet but still tasty.

This is supposed to be a mojito cocktail which is rum, lime, and mint. While it’s not bad, the mint flavor is overwhelming and takes center stage over the rest of the flavors. There’s a touch of rum flavor on the inhale and a slight hint of lime on the exhale but if they were more prominent it would enhance the vape. Regardless, if you like mint then you will still like this flavor.

When done right, blue raspberry is a great flavor. Shade has done a good job with their blue raspberry flavor. It has a candy-like sweetness and tart notes that are a signature of blue raspberry flavors. This disposable is verging on being almost too sweet but I like it a lot. If you don’t like ultra-sweet flavors then you may want to pass on this one.

I absolutely love this flavor. The mango is hard to taste but this tastes great as it is. There are mostly notes of watermelon with peach as a supporting taste that comes in afterwards. It’s a great balance of flavor and just the right amount of sweetness.

I love a good melon vape and this one does not disappoint. The honeydew and cantaloupe come together for a light and refreshing taste with realistic and natural sweetness. There’s also a hint of watermelon in here that brings together the whole flavor quite nicely.

How this flavor tastes is accurately described by the name. It tastes like a glass of pink lemonade, complete with a tangy and slightly sour kick of lemon. The lemon is strong in this flavor and I think that it makes it that much better and more enjoyable. This flavor isn’t as sweet as some of the other Shade disposables but it’s very, very good.

Shade’s Mystery is like the white Airheads candy in a vape. It’s a mashup of all of their different flavor profiles. Before I tried it, I didn’t think that it would be any good but it’s surprisingly tasty. It tastes almost like a glass of fruit punch; it’s hard to discern individual fruit flavors but it’s tasty nonetheless. It’s mysteriously good for a blend of all different kinds of fruits. 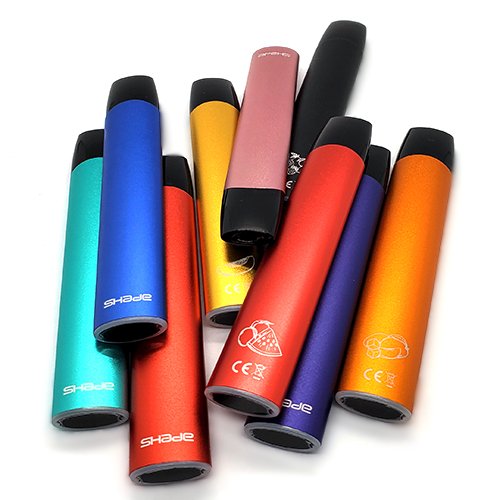 Shade Disposables only come in one strength, which is 5% (50mg). This is the case for many disposable vapes, but Shade’s disposables hit different than your standard 50mg. They’re still equally as satisfying as their competition but I’ve noticed that the draw is much smoother. It could be that they’re using a different nic salt formulation but I can’t say for sure. But they’re easier to chain vape while still providing a nice throat hit.

The draw from the Shade is a mouth-to-lung one, however it’s a little looser than most other disposables that I’ve tried. It’s not exactly a loose MTL draw, but it’s looser than your standard MTL draw. Hard to describe accurately but that’s the best that I can convey with words.

Draw activation works properly but it takes a bit of force to activate. This could be due to the slightly looser draw. The mouthpiece is very comfortable to vape with and I prefer it over the flat, boxy ends of other disposables.

Yes, it’s another disposable. But I think that Shade has done a good job with their flavors; enough of a good job to warrant trying them. The shape and ergonomics of the mouthpiece are also a welcome pro to these disposables. The whole design is more comfortable to use and the look of them reminds me more of a pod vape than a disposable.

Like a lot of other disposable brands, some of the flavors could use some work but that’s to be expected — it’s difficult to come out with flavors that everyone will love.

There are some cons to Shade’s disposables but the pros are enough to outweigh them handily. If you’re looking for a new disposable to try, Shade disposables are a great option.