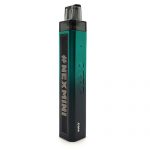 Pod devices are something new for Wotofo, especially a MTL pod device, but they’ve released a few good MTL tanks like the Cog MTL RTA and STNG MTL RDA in the past so it’s safe to say they know what MTL vapers want.

The Nexmini Pod has adjustable power output from 1-30W, an OLED display, and an 800mAh battery that charges with a Type-C cable. It has a 2.5ml pod capacity and takes replaceable coils. It also has adjustable airflow control built into the coils.

Should you get the Nexmini Pod if you’re a MTL vaper? Read this review to find out. 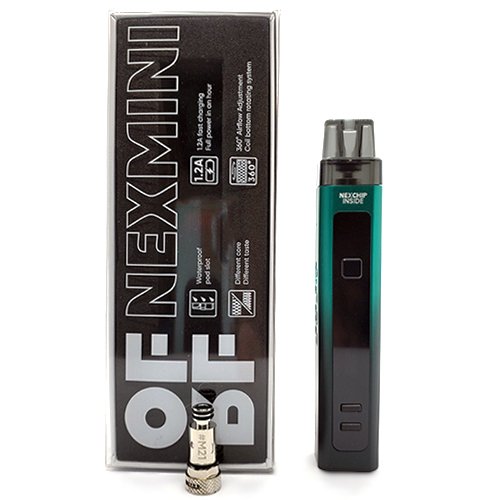 The Nexmini is like a cross between a pod device and a traditional vape pen. It’s a stick-shaped device that is much taller than it is wide, with flat sides and a square base. The edges on the Nexmini are slightly rounded to make it more aesthetically pleasing and comfortable to hold. The build quality is excellent as I’ve become accustomed to from Wotofo products. The machining is clean and the device is well made and precisely manufactured.

At 110.5mm tall, 19.5mm wide, and 19.5mm deep, I can almost conceal the Nexmini in my palm; it’s just slightly too tall. The rounded edges make it pleasing to hold and it feels very natural to use. The fire button is perfectly positioned for thumb firing. Index firing is slightly awkward but manageable. The fire button and two adjustment buttons are firm and take a reasonable amount of pressure to activate.

Aluminum alloy is used for the body and the pod is made of PCTG. It only weighs 56g with a full pod so calling it light is an understatement. I might as well be holding a feather! Without a doubt this is one of the lightest pod devices out there.

I love the fading paint on the Nexmini. My Black Green device has a satin finish that fades from green at the top of the device into black at the bottom and it looks awesome. There are three fading colors available (Black Red, Black Blue, Black Green) as well as four solid colors. The paint is seemingly of high-quality and has not faded, chipped, or scratched during my testing.

There’s a lot of branding on this device but I don’t think that it looks bad. In fact, I think that it matches the character of the Nexmini perfectly. The back of the mod has a fine mesh grill with #NEXMINI printed onto it. The side of the Nexmini has the OFRF logo and a .com printed, while the other side has a small picture of mesh with an even smaller “Powered by nexM technology” printed below it. There’s a lot going on but it’s done in such a way that it compliments the look of the Nexmini nicely.

The front of the Nexmini is spanned by black plastic that makes it look like it has a huge screen. In actuality, the screen is tiny and occupies just a small space above the adjustment buttons. Despite its small size, the screen is crisp, very bright, and perfectly usable. On the bottom side of the device is a Type-C port for charging. 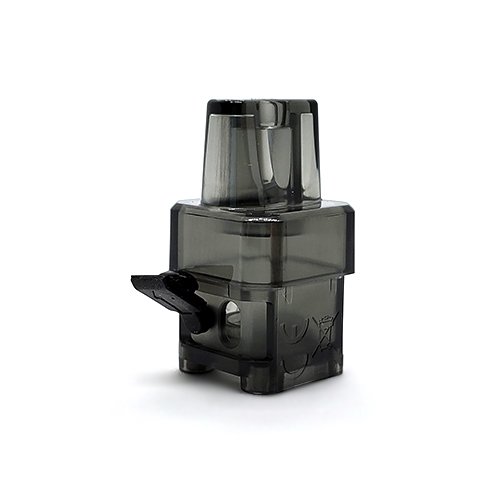 The pod attaches to the battery with a mix of magnets and pressure fitting. There are four magnets, one on each corner of the pod. The mouthpiece is a slim rectangle shape that is comfortable to vape on. The pod holds 2.5ml of eliquid and is filled through a port on the side of the pod which is secured by a rubber bung. Because the port is located in an odd spot on the side of the pod it’s difficult to fill the pod all the way without spilling and making a mess so I usually just filled it as much as I could.

How to Use the OFRF Nexmini Pod 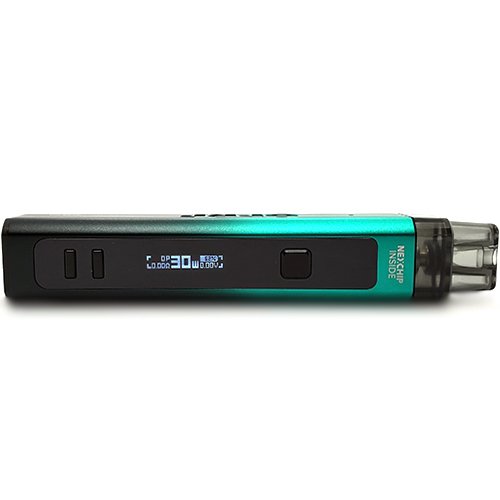 The Nexmini uses Wotofo’s Nexchip and features adjustable wattage from 1-30W. Simplicity is the name of the game with the Nexmini. It’s a very straightforward device to operate because there is no menu and no modes other than the default wattage mode.

The Nexmini comes with a coil pre-installed so all you have to do to get started is fill the pod. Pull out the pod and open the rubber bung on the side. Fill it up with your favorite eliquid and leave it for 5 minutes to become fully saturated. While you wait, ensure that the airflow control on the bottom of the coil is set to fully open.

Insert the pod into the device and turn it on by pressing the power button five times. The pre-installed M22 coil is best from 15-18W so set it to 15W to start with. Press the fire button and vape away. From here you can adjust the wattage until you find the output that you like (up to 20W). You can also get a more restricted draw by removing the pod and turning the airflow control if you so wish.

The Nexmini uses nexMESH replaceable coils that are specifically made for it. This means that they aren’t cross-compatible with any of Wotofo’s other coils. The Nexmini comes with the following two coils which are the only coils presently available:

These coils push fit into the bottom of the pod and are easy to install or remove. They have built-in airflow control on the base of the coil which consists of 5 holes. The airflow control ring tends to move up and down and could have been constructed better. The airflow can be cut down to achieve an even tighter MTL draw than what the Nexmini delivers by default by twisting it to adjust. 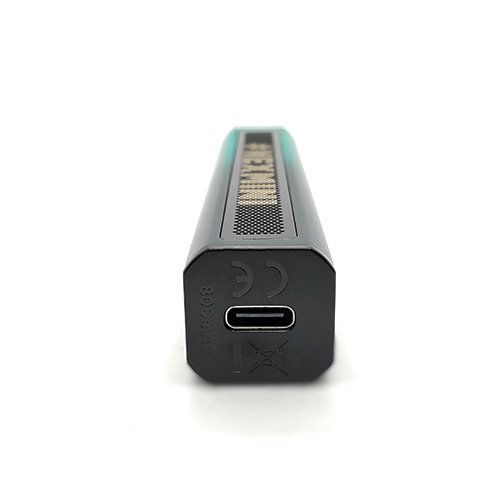 For only having an 800mAh battery the Nexmini lasts for quite a while of vaping. This comes down to the coils needing relatively low wattage to operate efficiently, so not much battery power is used each time you take a puff. At 18W I was able to vape nearly 2 full pods of ejuice on a single charge.

The Nexmini uses Type-C fast charging and boy, does it charge quickly. From completely dead I timed 40 minutes for a full charge using a fast charger. 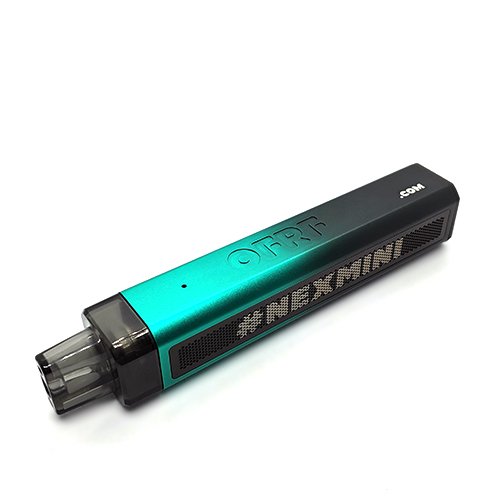 The Nexmini is truly a MTL device with no option for DL vaping. The airflow on its most open setting of 5 airflow holes per side is a nice MTL draw that is restricted and not loose at all. Cutting down the airflow allows you to get all the way down to a tight MTL draw when vaping on 1 or 2 holes. This range of adjustment for MTL vaping is great and allows you to achieve exactly the type of MTL vape that you’re after.

Both the M21 and M22 coil performed very similarly to one another. I didn’t notice a drastic flavor difference between them. The only real difference is that the M21 coil can be pushed to slightly higher wattages than the M22 coil and so it can deliver a warmer vape.

Both coils deliver a warm vape at 15W and very good flavor. I can taste all of the nuanced and subtle flavors in my ejuice and that’s surprising considering the low wattage. Increasing the wattage leads to a warmer vape and I liked vaping both coils at 18W. For me, the airflow completely open is a nice MTL vape that isn’t too loose but still isn’t too tight that it’s a struggle to draw. For ratings, I give the flavor a 9/10 and the draw a 10/10.

50VG, 55VG, and 70VG all wicked without a problem. The coils had no trouble keeping up with wicking and stayed moist at all times and through all manners of chain vaping. On the flip side of the coin, I did get some condensation on the bottom of the coils but no leaking whatsoever. The battery stayed completely dry throughout my entire review period.

I’ve ran 25ml+ through each coil and at this point they’re still vaping like they did when I first started using them. I haven’t experienced a noticeable drop off in flavor or performance. I’d guess that these coils can probably go another 10ml+ at the minimum. Coil life is a huge pro for the Nexmini.

Wotofo has produced an incredible MTL pod vape with the Nexmini. It’s small and lightweight and, perhaps most importantly, very satisfying to vape nicotine salts with. The number of pros for this device are numerous, with very few cons to speak of. There are only two coil options available right now (the ones that come with the Nexmini), but luckily they’re excellent coils.

If you’re a MTL vaper, the Nexmini will suit you perfectly and allow you to vape on a single coil for an extended period of time, saving you money on coils. I myself am going to continue using the Nexmini for my nicotine salt eliquids. It’s really that good.