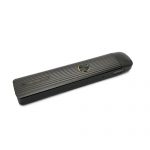 When Uwell released the original Caliburn back in 2019, the vaping world was taken by storm. The slim and lightweight design was instantly appealing and the warm, loose MTL draw even more so. The Caliburn has long since remained the ‘gold standard’ for pod vapes, with many pod vapes trying and failing to achieve its level of popularity and success.

Although the original Caliburn seemingly had everything vapers were looking for in a pod vape, Uwell obviously saw room for improvement as they’ve just released the successor to the Caliburn; the Caliburn G.

The Caliburn G retains much of what made the original so popular, but with a few new changes that will hopefully make it even better. The Caliburn G has both draw and button-activated firing, it takes replaceable coils instead of replaceable pods, and features two airflow modes.

Is the Caliburn G a worthy successor to one of the greatest pod vapes of all time? Read on to find out. 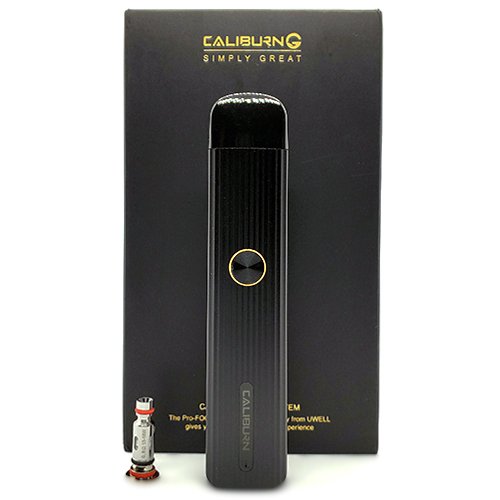 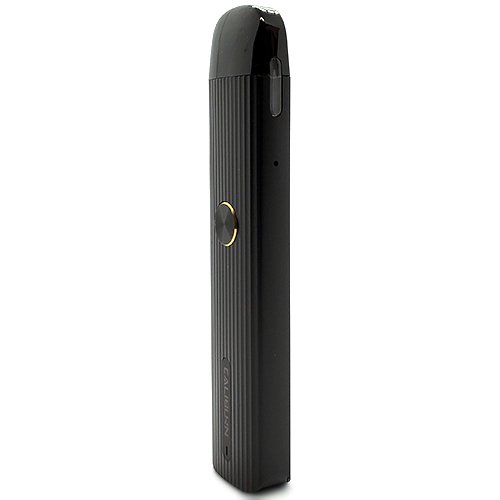 When you have a design that everyone seems to love, it makes sense not to change it too much. With that in mind, Uwell have made a few design changes to the Caliburn G to make it stand out from the original but nothing too drastic.

The Caliburn G is still a long and skinny device but it’s slightly shorter, a little wider, and slightly thicker than the original. This ‘vape pen’ shape is ultra-convenient because it easily slips into a jacket or pants pocket and doesn’t take up a lot of room. The Caliburn G is made out of zinc-alloy and very light.

The ribbed lines that ran down the sides of the original are featured on the entire front and back face of the G. These lines add some grip to what would otherwise be a slippery device and gives it a nice look as well. On the front side of the device “Caliburn” is printed subtly with an LED indicator just beneath it.

The firing button is larger than it was on the original and has a bronze accent ring around it. The bronze accent gives it a classy look that I’m a huge fan of. The button is tactile and responsive when pressed, but the Caliburn G also features draw-activated firing so you can just draw on the mouthpiece to vape. 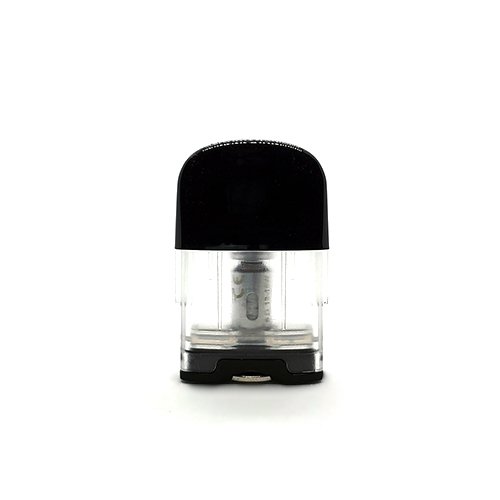 The mouthpiece also serves as the fill cap for the pod. It’s much more rounded than the mouthpiece on the original and while I think the original was comfortable to use, I like this mouthpiece even more. It follows the curves of my lips even better and just generally feels nicer.

While the pod on the original Caliburn attached by way of magnets, this pod clicks into place. There was nothing wrong with the magnetically attached pods but I prefer the security of the click-fit. It won’t come out easily, even if dropped, and this can save you from searching around in the dark for the pod if you drop it.

When the pod is installed there are windows on the side of the Caliburn G that allow you to easily check your remaining ejuice. The bottom half of the pods are completely clear and can hold up to 2ml of ejuice. The Caliburn G takes Uwell’s new Caliburn G replaceable coils.

It’s hard to best a classic but I’m satisfied by the design and overall quality of the Caliburn G. It looks good and it’s built well. I know that they say “if it ain’t broke don’t fix it” but I feel like everything that Uwell changed actually makes the device even better.

How to Use the Caliburn G 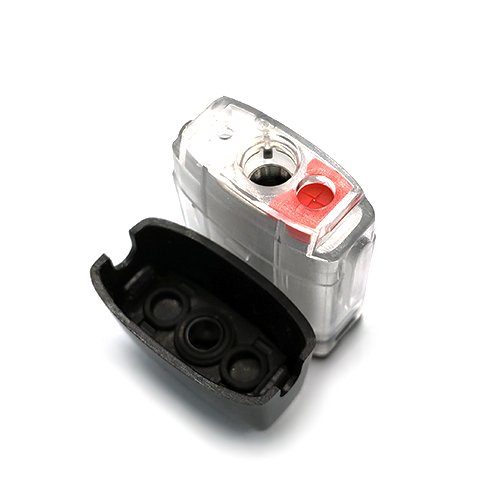 Even if you’re new to vaping the Caliburn G is a quick and easy device to get set up with. However, it takes replaceable coils instead of the replaceable pods on the original so you’ll want to make sure that you prime properly before vaping.

First, grab a coil. Both of the coils that come in the box are the same so it doesn’t matter which one you choose. Take your ejuice of choice and drop a few drops of eliquid onto the cotton on the sides of the coil. After you’re done this, take the coil and insert it into the pod by lining up the flat edge with the flat edge on the bottom of the pod. The coil simply pushes into the bottom of the pod.

The mouthpiece serves as the fill cap so remove it by pushing it front to back or side to side. The mouthpiece is slick so it can be a pain to remove at first, but once you do it a couple of times it becomes a little easier.

You want to fill the pod by sticking your ejuice bottle nozzle into the red gasket. Fill the pod up and let it sit for 5 minutes. The Caliburn G will deliver either a MTL or tight MTL draw depending on which way you insert the pod so try both orientations and see which way you like. 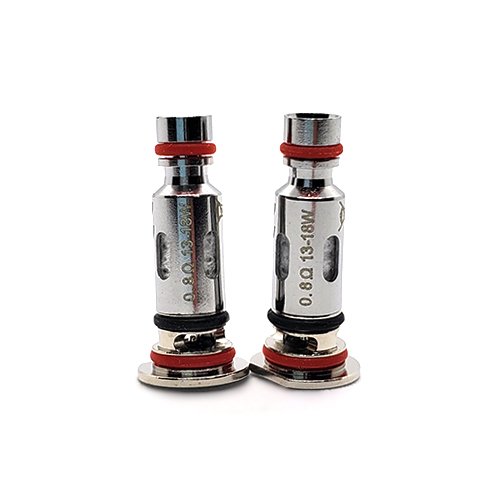 Two coils come in the box and both are the same: 0.8ohm Caliburn G Series Coils. There are also 1.0ohm coils available to be purchased separately. 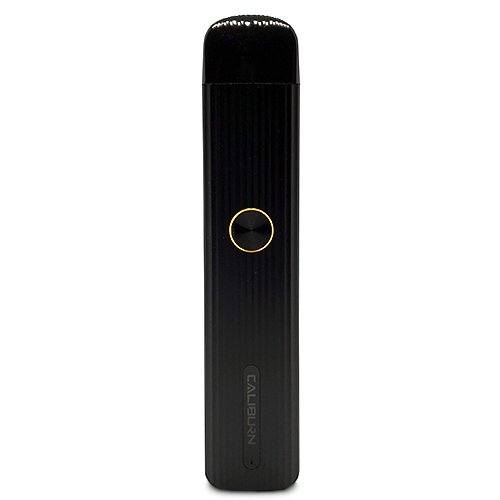 One big change to the Caliburn G that I’m glad to see is the addition of a Type-C charging port. Using a Type-C cable and power block, this charges the Caliburn G to full in 40-45 minutes. Being able to fully charge the device in under 45 minutes is huge and adds a ton of useability to the device. It can also be used while it charges so you’ll never be completely without a vape.

The Caliburn G has a higher max. wattage output than the original (15W vs 11W) so it uses slightly more power, however this is offset by the increased battery capacity (690mAh vs 520mAh). You can expect to vape a pod and a half to 2 full pods of ejuice before having to recharge.

When you draw there’s an LED that lights up to indicate your battery level. Green is 60%+, blue is 30-60%, and red is less than 30%. When the battery dies the red light will flash 10 times in a row and refuse to fire. 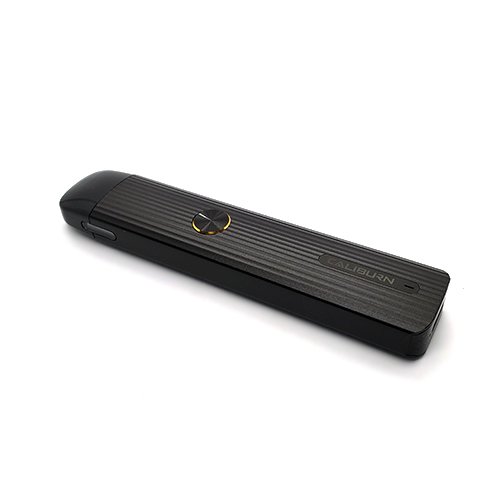 For such a simple and straightforward device there’s a lot to go over about the performance. The first thing I would like to talk about is the airflow. Depending on how you insert the pod the Caliburn G can go from a tight MTL draw to an even tighter MTL draw, both of which are significantly more restricted than the draw on the original Caliburn. I personally felt that the draw on the original was good but I always desired just a slightly tighter draw. If you liked the looser MTL that the original delivered, just be aware than the Caliburn G is not the same and will not give you as loose of a draw.

Another improvement over the original is the flavor. The Caliburn G steps up the flavor game and provides rich, warm, and flavorful vapor that is hard to compete with. Using the draw activated firing gives me warm vapor, but pressing the fire button just before starting to draw allows for a slightly warmer vape that is really nice. The flavor from this vape is downright impressive and better than any other pod vape I’ve tried thus far.

In addition to being flavorful, these 0.8ohm coils are versatile. A 6mg regular nicotine ejuice still delivers a nice draw, despite being used in such a low powered device. Nicotine salts are where it’s really at with the Caliburn G, though. A 35mg nicotine salt gives me an excellent throat hit that is really just perfect.

I even ran a 50mg nicotine salt through the Caliburn G for a pod worth of ejuice and while it was a much stronger and noticeable throat hit, it wasn’t too overpowering or too strong at all. No matter what type or strength of ejuice you prefer to use, the Caliburn G will handle it and handle it well.

Performance issues have been non-existent. There has been no leaking from the coils and no condensation either. The bottom of the pod and the contacts inside of the battery have remained completely dry throughout my testing. I used a 50VG ejuice, a 65VG ejuice and a 70VG ejuice and none of these leaked. The coils also keep up with chain vaping spectacularly as I never even came close to getting a dry hit.

In addition to the fantastic wicking capabilities, coil life is also fantastic. I’ve refilled the pod using a single coil more times than I can count as I stopped counting after the tenth refill. Only now is the coil is starting to taste a bit off so I’ll likely end up changing it in the near future.

Uwell managed to fix what wasn’t broken and got nearly everything right — again. For me, the Caliburn G is the new ‘gold standard’ for pod vapes as it’s everything I was looking for: a tight MTL draw, fantastic flavor, versatility with regular and nicotine salt ejuices, warm vapor, long coil life, great battery life, and fast charging for minimal downtime. The only con I could find was that the fill cap can be difficult to remove, but it gets easier after being taken off a few times.

If you were put off by the loose MTL draw on the original Caliburn, the Caliburn G might just be what you’ve been waiting for.

What do you think of the Caliburn G? Have you tried it? Leave me a comment and let me know your thoughts!