Smok Nord 4 Review: Bigger, But Is It Actually Better? 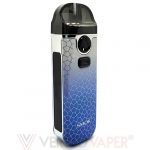 The Smok Nord 4 is the latest device in Smok’s popular Nord line of pod vapes. The Nord has been incrementally gaining new features with every iteration — the Nord 2 brought a screen, adjustable wattage up to 40W, and a larger 1500mAh battery.

Next came the Nord X with dedicated buttons for adjusting the wattage up to an increased 60W, as well as Type-C charging.

Now we have the Nord 4 which brings adjustable wattage up to 80W, a larger 2000mAh battery, and dual-adjustable airflow rings. It comes with two pods and coils: an RPM pod and coil and an RPM 2 pod and coil. Both pods have a 4.5ml capacity and are compatible with all coils from their respective coil ranges.

So is it worth upgrading from your current Nord device? I’ll answer this question and more in this review!

The Nord 4 is a pretty big and chunky pod vape. It’s 105mm tall, 33.7mm wide, and 24.4mm thick and it weighs 115g. It’s quite a bit larger than the Nord 2 in all aspects; taller, wider, thicker, and heavier. But compared to other pod vapes, it’s nothing really out of the ordinary. While it’s not one of the lightest or smallest pod vapes around, it’s still decently portable. You won’t have any trouble putting it in your pocket, but you’re definitely going to notice that it’s there.

Aside from the fact that it’s bigger, the design is relatively unchanged from previous Nord devices; rounded edges, flat plastic front and back panels, and a rectangular button with built-in LED are all still present. Even the mouthpiece on the pod is virtually the same duckbill shape.

But something that you’ll immediately notice isn’t the same is the addition of two airflow control dials. There’s one dial on each side of the device, just below the pod. Each dial has a semi-circular slot cut into it and can be rotated clockwise to close the airflow, or counter-clockwise to open the airflow.

There are small notches along the side of the dials, as well as a notch that runs down the face of it, that aid in turning the dials. Still, it’s much too hard to adjust, especially when you first start using them. The dials loosen up a little bit with use, but not nearly enough. If you don’t have nails, good luck! Start growing them now! 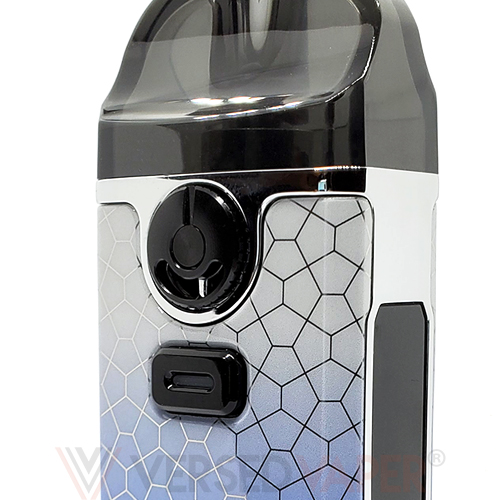 I appreciate the idea of the dual adjustable airflow but I always ended up setting them to the same setting. There’s no point in closing one off dial completely and restricting airflow to one side of the coil.

There is an OLED screen on located on the right side of the body. It’s been slightly improved from the Nord 2 and it’s now much brighter , but otherwise it’s the same screen and layout. It’s a simple black and white screen that displays your wattage, coil resistance, voltage, puff count, and battery life with %. Just below the screen are two small adjustment buttons that can be used to adjust the wattage up to 80W.

Something I find frustrating with the Nord 4 is that there’s a ‘fake display’ on the other side of the device. What I mean is that it looks just like the screen on the other side so I’ll press the fire button to check it, only to realize that it’s just black plastic and I’m looking at the wrong side. I get that SMOK probably did this for aesthetics and to give the Nord 4 symmetry, but I’ve looked at the wrong screen so many times that I’m just over it!

How to Use the Nord 4 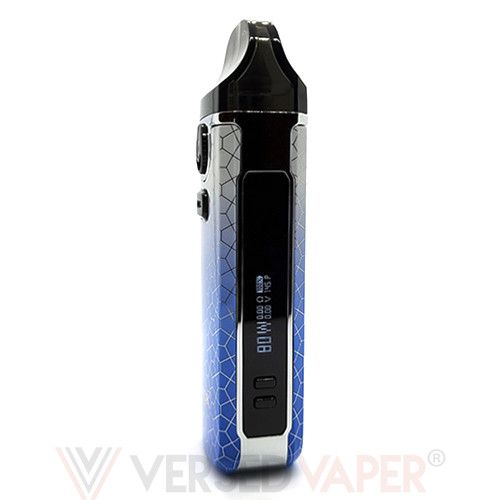 The Nord 4 isn’t a complicated device at all. It’s very easy to use because there aren’t any modes other than the default wattage mode and there are very few button combinations. To turn it on or off, press the fire button five times.

In the box you get two pods and each one comes with a coil pre-installed. You can see which pod is which by looking at the red fill port stopper, as they are labeled “RPM” and “RPM2” here.

Take your pod of choice, remove the fill plug, and fill it up with your preferred ejuice. Note that because both of these coils are relatively low resistance, they’re best suited for use with regular nicotine ejuices. You can use the 0.4ohm RPM coil with nicotine salts, but it will have to be fairly low strength (<25mg). Once you’re done, wait a few minutes for the coil to properly saturate before inserting it into your device. This is just so that you don’t accidentally hit the fire button and burn your coil before it’s fully saturated.

With your coil wicked and ready, set your wattage to somewhere in the recommended wattage range. I suggest starting at the lowest recommended wattage and working your way up, like the airflow, to find what you like best. For the 0.16Ω RPM2 pod/coil this would be 25-50W, and for the 0.40Ω RPM pod/coil it’s 25W.

The Nord 4 is exclusively a button activated device and draw activation is not a feature. So in order to vape, you just have to press and hold down the fire button. Start with the airflow dials fully open by turning them all the way counter-clockwise. As you vape you can close off the airflow until you find an airflow setup that is to your preference.

You can lock the device by pressing the fire button 3 times. This will lock the entire device and you won’t be able to adjust the wattage or fire.

These pods are much bigger than the pods used for the Nord 2 and aren’t cross compatible. They also hold a bit more ejuice with their 4.5ml capacity. The pods have a light tint to them but seeing your ejuice level isn’t too difficult. The pods attach magnetically to the battery by way of 4 strong magnets, one on each corner of the pod. There’s no movement when the pod is inserted and it sits firmly in place.

The 0.16Ω RPM2 coil is rated for 25-50W and, according to Smok, best at 40W. This coil is designated as a direct lung coil and because of the low resistance, should only be used with regular nicotine ejuices.

The 0.40Ω RPM coil is simply rated at 25W with no wattage range at all. This coil is designated by Smok as a mouth to lung coil, but we’ll get into this in the performance section. Because of the resistance rating this coil is also best if used with regular nicotine ejuices but it can probably manage low strength nicotine salt ejuices that are 20mg or less.

These coils push into the bottom of the pod and are secured by a little latch. This latch is spring-loaded and has to be pulled to the side in order to remove the coils. The pod can be filled by removing the red rubber stopper at the side of the pod. 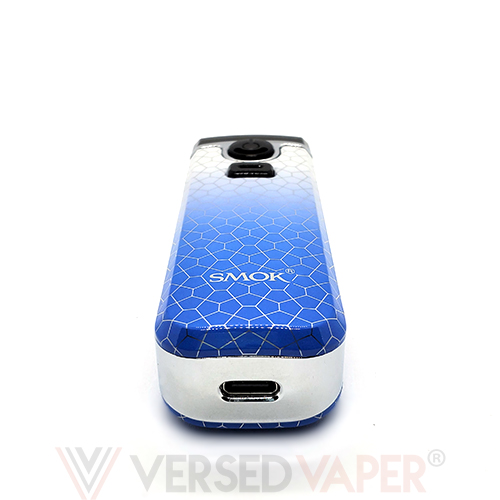 The battery on the Nord 4 is an upgrade from previous Nord devices. It’s a 2000mAh battery which is pretty large for a pod vape. With the RPM coil at 25W, you can expect 2-3 days of use out of a single charge depending on how heavily you vape. The RPM2 coil requires higher wattages and if you vape it at 55W like me, you’ll end up having to recharge it midday or every day at the least.

I timed the Nord 4 at around an hour for a full charge. A little lengthy but considering the size of the battery I can’t complain. Not bad, not bad. 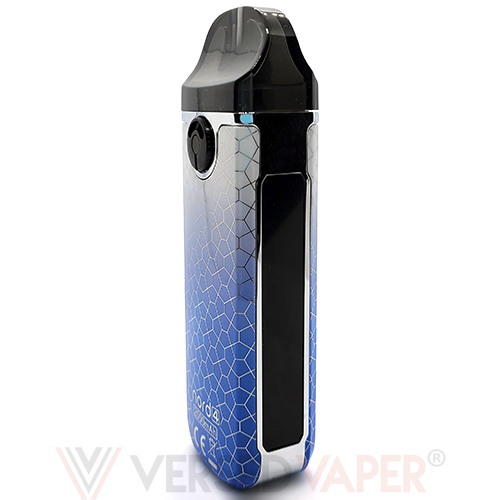 I used 70VG, regular nicotine ejuices with both of these coils. The RPM coil is recommended at 25W and that’s actually where it performs the best. I liked it the most right at 25W and didn’t feel the need to push up the wattage any higher. Flavor is good and vapor production is actually pretty decent. It produces warm vapor, not hot, and I found it nice to vape on with a 6mg ejuice.

With the airflow dials both closed I got a very, very loose MTL draw if you can even call it MTL. It’s more a restricted direct lung draw verging on loose MTL. Any way you put it, this is not the true MTL vape I was looking for when Smok designated this as a MTL coil. This is a decent coil, but not one that hardcore MTL vapers will enjoy.

The RPM2 coil is rated at 25-50W and I tried vaping it within this range for a while, but eventually I turned the wattage up to 55W and that’s where I liked it the most. Yeah, it’s a little outside of the recommended wattage range but it performs just fine here. Vapor is a little warmer and more to my liking than the lower wattages.

Flavor output here is rather good and a lot of the notes come through in my ejuices but not all of them. This is a slightly above average coil for flavor but not an incredible coil by any means.

For airflow I kept the airflow almost completely open on both sides, sometimes closing the dials down just slightly. This gives you a very open draw with lots of airflow. This amount of airflow allows this coil to put out big plumes of vapor so if that’s your style, leave the airflow open.

Now let’s talk about leaking. The RPM coil didn’t leak at all on me. There was a little condensation under the pod but no large amounts of ejuice. The RPM 2 coil leaked pretty heavily though and I had to make sure to remove the pod and clean it out at least once a day, just to be sure that it didn’t leak down into the internals.

Other than the leaking I had no real issues with performance. The button activated firing worked instantly when pressed and vaping and charging were totally fine.

The Nord 4 is the most full featured, best looking, and most well-made Nord device that Smok has ever produced. Unfortunately, I can’t say that all of this necessarily makes it better — that really depends on what you’re looking to do with it and how you like to vape. The leaking RPM 2 coil doesn’t do it any favors either.

For direct lung vapers who are maybe looking for a smaller device that is still powerful and that can be used to chuck some clouds, the Nord 4 might be a possible choice. But the 2000mAh battery isn’t going to last you through the day if you use it heavily, and the included RPM 2 coil is going to give you leaking issues. If the battery doesn’t bother you, you’ll at least want to pick up a different RPM 2 coil.

For anyone else, including MTL vapers, the Nord 4 should be a device you pass on. Out of the box it can’t be used with nicotine salt ejuices (not those with a higher strength than 20mg anyway), and it doesn’t give anywhere near a tight MTL draw.

All of this leaves me to wonder, who exactly did Smok design this device for? It’s a big departure from the MTL oriented Nord and Nord 2, and most direct lung vapers will be happy to stick with their box mod and tank/RBA setup.

What do you think? I would love to hear your thoughts. Leave a comment down below for me!