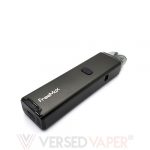 FreeMax is a company that is perhaps best known for their sub-ohm tanks. From the Mesh Pro, to the Fireluke 3, to the M Pro 2, it’s clear that Freemax makes some top quality vaping hardware.

For a while they were almost exclusively producing tanks, but in 2020 & 2021, Freemax greatly expanded their offerings and released the Maxus 200W, Maxus 100W, and Maxus 50W box mods, as well as the Maxpod, Autopod50, and Maxpod Circle pod vapes.

Here to expand their pod vape inventory a little more is the Freemax Onnix kit. It comes with one COILTECH 4.0 RDL mesh coil and one COILTECH 3.0 MTL coil so it can be used with either regular nicotine ejuices or nic salt ejuices.

The side of the device features an airflow slider that can be adjusted for RDL or MTL vaping to suit the coil that you’re using. It comes with a built in 1100mAh battery that charges through Type-C fast charging and last but not least, the power output can be set to one of 3 levels with a maximum output of 20W. 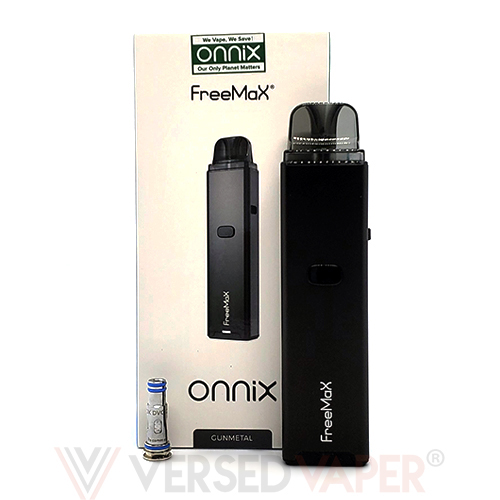 I’m not sure what it is about the Onnix, but it looks like a Freemax device. There’s no particular design element that makes me say this, but I think ‘Freemax’ when I look at it. The Onnix is a boxy pod vape with a long rectangle shape and rounded edges. It comes in six color choices; Gunmetal, Grey, Blue, Coral Red, Black, and Rose Pink. I got the Gunmetal one for this review. The paint is a matte finish that doesn’t hold fingerprints so it stays clean and looking neat.

The Onnix is a little tall at 109mm but it’s otherwise a nice size. It’s 26.2mm wide and 16.2mm thick so my hand has something to wrap around and hold which is nice. It’s still small enough to easily fit in pockets without being too noticeable, especially since it only weighs 50g.

The front side has a FreeMax logo that is small but stands out. The back side has a very in-your-face ‘ONNIX’ in a huge font that takes up the entire length and width. It’s honestly obnoxiously large and I’m not a fan of the lines inside the lettering. I think that it makes the Onnix look ugly.

There’s a fire button on the front that is made of a gloss black plastic. While the paint on my unit is still perfect, the fire button has gotten visibly scratched and scuffed. Other than the scratches it works perfectly and takes a decent amount of force to activate. I’ve still had it active in my pocket, but the button activated firing can be turned off by pressing the fire button 4 times.

One one side of the Onnix is a small airflow hole and on the other side there is an airflow slider. Sliding it to the right opens up the airflow and sliding it to the left closes the airflow down. There’s a nice amount of friction and resistance to this slider. It’s easy to adjust but it stays wherever you set it. I’ve played around with it quite a bit and it hasn’t loosened up at all so that’s reassuring for long term use.

Aside from how easily the fire button is scratched, the build quality of the Onnix is solid. The design is nice, but it could do without the huge ONNIX on the back.

How to Use the Freemax Onnix 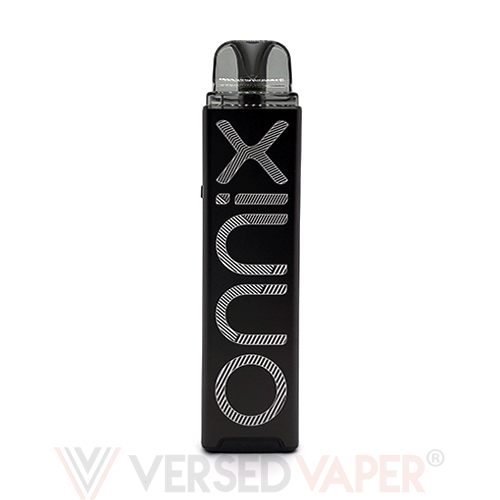 The Onnix has 3 power levels and the wattage output of each level will depend on the coil that you’re using:

To change the wattage level you just press the fire button 3 times and you’ll see the LED at the bottom of the Onnix light up. The Onnix actually scrolls “backwards” through the power output levels; it goes green, then blue, then red, then back to green when you change the power output level. Not sure why it’s like this. I think it would make more sense for it to scroll up. How about you?

Getting started with the Onnix is easy. It comes with the 0.5Ω coil already installed in the pod so if you’re using regular nicotine ejuices or low strength nicotine salts (<30mg), you can use this coil. If you want to use the other coil then just pull the coil out of the bottom of the pod and push the new coil in. Make sure to insert the new coil fully and ensure that it sits snugly.

The Onnix pod has a convex mouthpiece that is really nice to vape on. The pod has a very light tint that doesn’t obscure seeing your ejuice level at all. The pod holds 3.5ml of ejuice and it’s side filled, however you have to remove the pod from the battery to access the fill port.

You get two coils with the Onnix:

The 0.5Ω coil is a SS904L mesh coil with FreeMax’s tea fibber cotton wick. This coil will fire at 16, 18, or 20W depending on the power level you set. It’s meant for restricted direct lung (RDL) vaping and for regular nicotine ejuices from 0-6mg. I also used it with a 35mg nicotine salt on the lowest power level and didn’t have a problem.

The 1.0ohm coil is a dual vertical coil that is presumably made of kanthal, but Freemax doesn’t list the material. This coil also uses a tea fiber cotton wick. It will fire at 9, 11, or 13W and it’s meant for mouth to lung (MTL) vaping (Confused about the difference between RDL and MTL vaping? Check out our guide). This coil can be used to vape regular nicotine ejuices from 3-12mg and nicotine salts up to 50mg. 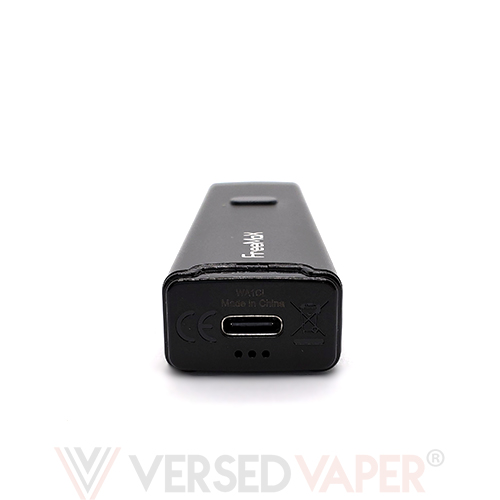 The Onnix only has an 1100mAh battery but because both coils function at relatively low wattages and aren’t ultra-low resistance, the battery does well. With the 1.0Ω coil you can expect to vape close to 2 pods of ejuice before you have to recharge. Using the 0.5Ω pod you can expect to vape 1 pod before recharging. The pod holds 3.5ml of ejuice so this is good battery life in my book.

The Type-C charging port is at the bottom of the Onnix so you have to lay it down on its side to charge. Using a wall charger it will charge from 0% to 100& in about 60 minutes.

When vaping with the Onnix the LED will light up when you draw to indicate your remaining battery life. It will also light up when charging. The colors are: 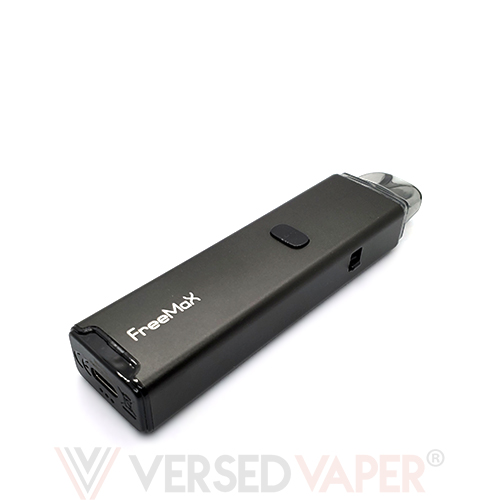 I have been using the Onnix for the past few weeks and I really like the simplicity of it. You can just pick it up, press the button, and you’re vaping. The wattage levels are nice to have but, while they do make a difference, it’s a very small change between each level because the wattage outputs are so close to one another.

The 0.5Ω coil comes preinstalled and so that is the coil that I used first. This is a nice restricted direct lung coil that is verging on MTL depending on how you set the airflow. Leaving the airflow wide open is what is suggested by FreeMax, presumably to prolong the life of the coil. This coil worked great for me with a 35mg nicotine salt on the red (16W) power level and put out good flavor. Closing off the airflow on the highest power level works too, but the vapor gets almost uncomfortably warm. From one power level to another the flavor and performance seemed consistent.

Moving on to the 1.0Ω coil, it’s a great coil for MTL vaping that does well on flavor too. Even with the airflow open you get a nice loose mouth to lung draw. With the airflow closed it’s a tight MTL draw that I really enjoy. With this coil the wattage levels seemed to make even less of a difference than with the other coil as it’s only a 4w difference from the lowest to the highest setting. I usually just left it in the middle on blue and went about my vaping.

One annoyance I faced with the Onnix is the draw activation. It worked without issues with the 0.5Ω coil but was hit or miss with the 1.0Ω coil. I actually gave up on it and ended up using the button all the time. I had to pull so hard to get it to activate that it just wasn’t worth the effort.

I’ve had tiny droplets of condensation inside the battery but no leaking from either coil. As far as coil life goes, the 0.5ohm coil lasted for 7 refills (24.5ml) before it tasted off and required changing. The 1.0ohm coil did a little worse at 5 refills (17.5ml). This is average to above-average coil life and certainly not bad, but if you vape a lot then you should pick up an extra pack of coils when you buy the kit.

There isn’t a lot to complain about with the Onnix. The only things that I disliked are the huge ‘ONNIX’ on the back of the device and the spotty draw activation but apart from these cons, it’s a convincingly good pod vape. Whether you like a restricted direct lung vape or a mouth to lung vape, you can get it from the Onnix. Flavor is good, the coil life is good, and the battery lasts and doesn’t take too long to charge.

Who would I suggest the Onnix to? MTL or RDL vapers who mainly use nicotine salts will get the most out of the Onnix, as will beginners or those who want a straightforward device that will work. Good job FreeMax!