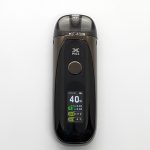 The SMOK POZZ X is an AIO pod device which has been released to celebrate SMOK’s 10 year anniversary. A lot of the specs for the POZZ X are identical to the Nord 2: a 4.5ml pod, adjustable wattage up to 40W, button activated firing, and a 1400mAh battery.

But there are some changes (not necessarily improvements) that make the POZZ X different. For one, it has an adjustable airflow control ring on the bottom of the pod. It also has a large color display on the front of the device. The POZZ X is compatible with all of SMOK’s RPM coils.

Just from looking at the specs, the POZZ X seems like nothing more than a Nord 2 in a different shell; a Nord 2 #2, if you will. Does it perform differently? Is it better? Read on to find out!

This device was sent to me from Vapor4Life for this review.

The POZZ X is one of those devices where the color you choose makes a huge difference to how good the device looks. My black unit with carbon fiber looks pretty average — it just looks like a dark, chunky device. In my opinion, the 8 other colors look much better, especially the purple, blue, orange, gray and 7 color, and yellow. They just ‘pop’ a lot more and give the device a totally different appeal.

The POZZ X has rounded edges and rounded sides with a curving front and back plate. It’s free of sharp angles so it’s really nice to hold, although it is a little chunkier than I like my pod vapes to be. Compared to the Nord 2, the POZZ X is slightly taller, wider, and thicker by a few millimetres each way. On paper it doesn’t seem like much but with the POZZ X in my hand I can feel the difference.

The gun metal paint on the sides of my unit is a nightmare for fingerprints. It picks up every small touch and smudge and quickly starts looking dirty. The power/firing button is also finished in this same gun metal paint. The front and back panels hold fingerprints too, but it’s not as noticeable.

The 0.96” display is a color screen and it’s a decent size. It shows a small SMOK logo, a battery life icon, your wattage, voltage, coil resistance, puff time, and a puff counter. It also shows whether the device is locked or not with a large green padlock.

Overall, the battery portion of the POZZ X is quite well built. It’s a solid device with no visible imperfections in the build quality and the button is firm and responsive. Some design aspects like the gun metal paint and overall chunkiness could do with some changes though.

On each side of the POZZ X are three airflow slots: one large slot and two smaller slots. Airflow enters these slots, travels down through the channel on the inside, and through the airflow control ring at the base of the pod. This airflow control ring is fully adjustable and can be set to two small slots, two large slots, or anything in between. Unfortunately, adjusting the airflow doesn’t change the draw at all. The draw is the same fully closed or fully open and that’s a shame.

The pod for the POZZ X is different from the pods for the Nord 2. They hold the same 4.5ml of ejuice but the POZZ X has a smaller pod. As a result, the pods are compatible with each other. The pod clicks into the battery and is held in place by two clips. The pod stays seated firmly enough that it won’t just pop out of the battery but there is a lot of wiggle. With very little effort I can wiggle the pod back to front and side to side.

The POZZ X comes with a single 4.5ml RPM pod. This pod is compatible with all of SMOK’s RPM coils so in addition to the 0.4ohm and 0.6ohm RPM coils that come with the POZZ X, you can also get 1.0ohm and 0.3ohm coils as well. The coils simply push into the bottom of the pod.

The top of the pod is easy to see through but the bottom portion of the pod is frosted with a dark tint. So when you’re running low on ejuice, which is the time you’ll want to check your pod, it’s not so easy to see.

The rubber plug on the side of the pod is deep and secure but it’s still easy enough to pull out. On the first fill I had trouble getting the plug back into the hole but it became easier once it got some ejuice on it. The fill hole is a decent size but it’s easiest to fill with pointy tipped bottles.

The 0.4ohm coil comes preinstalled in the pod.This is a DTL coil and it’s meant to be used with regular nicotine ejuices. The 0.6ohm coil is more of a MTL coil but it’s a loose MTL draw that is not as tight as I hoped it would be.

These two coils can be used with either regular nicotine ejuices or salt nicotine ejuices, but I would stick to lower nicotine salt strengths if you use the 0.4ohm coil. The loose MTL draw of the 0.6ohm coil is better suited to high nicotine strengths.

How to Use the SMOK POZZ X 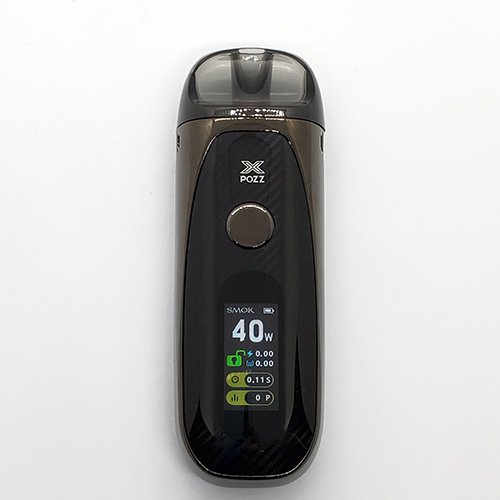 Pressing the fire button five times brings up a menu. There are three options: lock, power off, and puff clear. The options are pretty self explanatory.

Using the POZZ X is easy. Take the coil you want to use, prime the holes with some ejuice, and push it into the bottom of the pod. Remove the rubber stopper from the fill port and fill the pod up. Wait 5-10 minutes to allow the coil to fully saturate. Now, click the fire button three times and scroll to the wattage you want. I found both coils worked well in the 20-25W range. Press the fire button to vape! You can also adjust the airflow control ring but it really doesn’t make a difference to the draw. The draw will depend on the coil that you use. 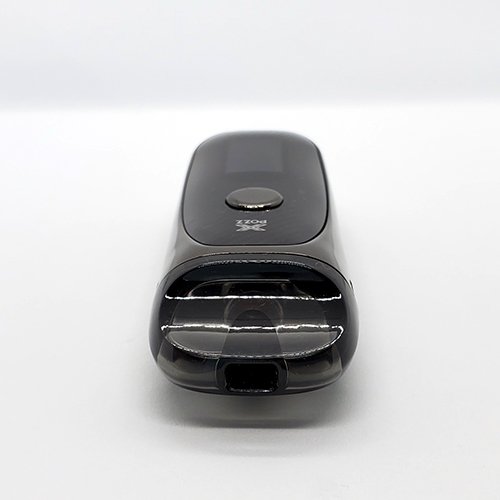 I used the 0.6ohm coil at 22W and the 0.4ohm coil at 24W and averaged about a pod and a half per charge. This equalled over 200 puffs per charge which is not bad at all. The battery definitely lasts long enough to get through a day of heavy vaping so I can’t fault the POZZ X here.

The POZZ X uses Micro-USB charging which I find strange. I thought for the 10th anniversary device they would at least use the latest Type-C charging but oh well.  Charging times aren’t bad though, coming in at 55 minutes for a full charge. 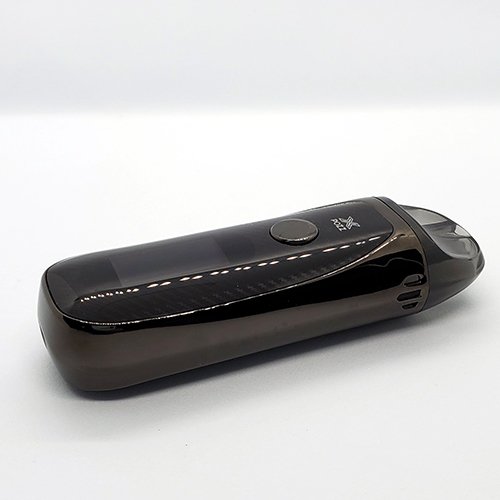 Is the POZZ X better than the Nord 2? Not really. It’s good, just not as good as the Nord 2. One especially big issue I faced is leaking. Using any ejuice below 70VG like 60VG or 50VG results in ejuice pooling in the bottom of the battery. This happens with both coils. I can only imagine that this has something to do with the airflow control ring because the 0.4ohm coil is the same coil as for the Nord 2 and I never had any issues with it in the Nord 2. If you use thin ejuices, the POZZ X is going to leak.

Another performance issue is the airflow control ring; it doesn’t do anything. Whether I close it all the way or I set it to fully open, the draw feels exactly the same. Disappointing to say the least!

I liked both coils best in the 20-25W range. 24W is where I tended to stay with the 0.4ohm coil but this coil can be pushed higher. The flavor is very good and the clouds are pretty nice too. This coil is for DTL vaping so I stuck with 6mg regular nicotine ejuices. I’m sure you could use low strength nicotine salts in it, but I didn’t try. 70VG+ ejuices wick nicely and didn’t leak on me.

22W is where I liked the 0.6ohm coil the most but I didn’t like this coil as much as the other. The draw is tighter, like a loose MTL, and I like that. But my ejuices taste muted with this coil and don’t give me the same profile as I’ve had with better coils. The draw with a 50mg nicotine salt is pretty powerful and the throat hit is very aggressive. Like the other coil, no leaking with any ejuice 70VG+ and it kept up with wicking no problem.

I’m torn on the POZZ X. It’s not necessarily a bad device but there’s really no reason to purchase it over the Nord 2. If the airflow control actually worked it might be a different story but as it stands, the POZZ X is just a slightly worse version of the Nord 2. The pod wiggles, it leaks thin ejuices, and the 0.6ohm coil delivers muted flavor. The 0.4ohm coil is good but this coil already comes with the Nord 2 — and it doesn’t have any of the previously mentioned issues.

If you have the option of picking up the Nord 2 then get that instead. If not, the POZZ X is still a good performer with the 0.4ohm, just with a few issues.