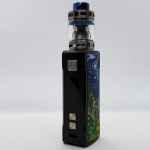 Freemax have earned a reputation for their flavorful tanks like the Fireluke 2 and Mesh Pro. Recently they’ve also released a few small pod devices like the Freemax MaxPod and AutoPod50 and both of these deliver great performance. But one thing Freemax lacked was a box mod. Here to fill that void are the Maxus 200W and Maxus 100W kits.

The Maxus 100W is a single battery box mod that, as the name suggests, can fire at up to 100W. It’s compatible with a 21700, 20700, or 18650 battery and what’s neat is that the battery can be loaded in any direction. Freemax calls this “SmartLoad Battery Technology”. The Maxus 100W has Power mode, Temperature Control, TCR, Bypass, and VPC modes.

The Maxus 100W kit comes with the Fireluke 3 tank which is an upgraded version of the Fireluke 2. It uses COILTECH 4.0 SS904L coils which are Freemax’s latest generation of mesh coil technology. 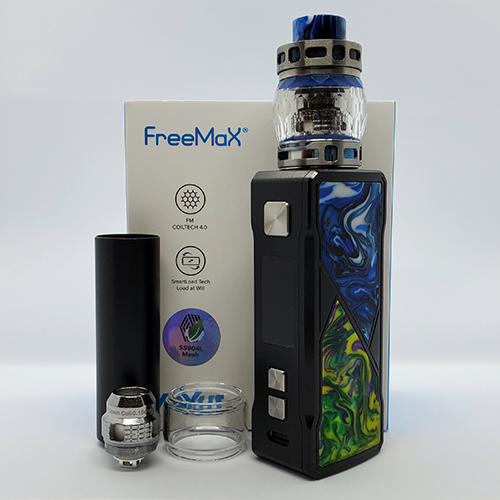 The Maxus 100W is a nice size for a single battery box mod. It’s not the smallest single battery box mod out there but it’s a comfortable size and weight. It’s 90.2mm x 37.5mm x 28mm and weighs 146g. With the Fireluke 3 attached the whole kit weighs around 194.5g. You can feel the weight in your hand but it’s not too heavy at all.

The Maxus 100W has a boxy rectangular shape with angled edges. It’s not exactly ergonomically shaped and the sides dig into my hands a bit. Still, for me this isn’t a deal breaker but rounded sides and edges would be more comfortable to hold.

The battery door cover has two diagonal resin patches in contrasting colors. Personally I’m not a huge fan of how this looks but I applaud Freemax for doing something different than all the other companies. The top resin patch matches the resin on the included Fireluke 3. My unit is the blue-green and the top resin patch is blue to match the blue resin Fireluke 3. The bottom resin patch is a green/yellow mix. There are six colors available so there should be a color mix that you like.

The 510 plate is slightly raised off the top of the mod so there’s a slight gap with a tank attached. This is to prevent the paint on the top of the mod from getting scratched and scuffed by the tank but the gap still irks me. The gap is for the best though as I’ve already had some paint coming off on the edges of the mod. I can only imagine that the top would get messed up pretty quickly if not for the raised 510. And for those of you wondering about the 510 pin: yes, it is spring-loaded.

The screen is black and white and honestly looks a bit outdated but it’s very crisp and clear. It’s bright too and easily viewable even in sunlight. The buttons are firm and responsive with no button rattle whatsoever. Just below the buttons is a Type-C charging port.

The battery compartment on the Maxus 100W is super clean. It’ll fit either a 21700, 20700 or 18650 battery and there’s a ribbon for easy battery removal.  What’s really cool is that the Maxus 100W uses what Freemax calls “Smartload Battery Technology”. This means that you don’t have to worry about positive or negative orientation and lets you load the battery however you want. I loaded my battery both positive side up and positive side down and I can attest that it works just the same.

The Maxus 100W will fire, as its name suggests, up to 100W. It supports Power mode, Temperature Control, TCR, Bypass, and VPC modes.

The menu system is straightforward and easy to use. Pressing the fire button three times brings up the menu with MODE, SET, INFO, & EXIT.

MODE lets you, well, select your mode. This is straightforward too but one thing I want to mention is that when you’re setting your TCR value, there’s a list of common TCR values on the bottom of the screen. Thoughtful of Freemax and quite frankly very useful too.

The settings option lets you change the screen timeout, lock the coil resistance, clear the puff counter, check & clear the puff time, and change to C° or F°.

Overall, I’m happy with the features and functioning of the Maxus 100W. It’s a full featured mod with an easy to navigate menu. I think even beginners will find this mod easy to use and vape with.

As the follow up to one of the best tanks of all time, the Fireluke 3 has got big shoes to fill. Starting with the looks, it sticks to the same general design and has a similar appearance to the Fireluke 2. The biggest design differences are the metal rings around the top cap and airflow control ring.

The Fireluke 3 is primarily made out of resin but there are metal rings for protection and reinforcement. A big problem with the Freemax Mesh Pro was that the resin was fragile and prone to breaking if you dropped the tank. I think the Fireluke 3 looks really good and it’s reassuring that it looks sturdy enough to survive a fall.

The tank comes preinstalled with a diamond pattern glass. This glass looks neat and different but only holds 3ml of ejuice. There’s a 5ml regular bubble glass in the box and this is what I switched to after just a few days. The larger ejuice capacity makes a big difference, especially with how much ejuice this tank uses.

The top cap pushes back to fill. There’s a red dot on the front of the tank, just below the Freemax logo, where you push it back. Apparently there are three steel balls for added friction to prevent the top cap from opening accidentally. In my testing the top cap is indeed very sturdy and doesn’t open too easily, but it’s still easy enough to open with one hand. It’s a perfect balance.

First introduced on the Fireluke 2, the Fireluke 3 also has an air-release vent to make filling the tank easier. Open the top cap and look down the drip tip and you’ll see a little hole. This hole releases air as you fill the tank to prevent ejuice from spilling back out the fill port. I can stick my ejuice nozzle in the fill port and fill away without a care in the world and I don’t have any problems.

The Fireluke 3 uses an 810 drip tip with double o-rings. The drip tip hole also has an o-ring so any other 810 drip tip should be compatible.

The Maxus 100W kit comes with two coils for the Fireluke 3:

The 0.2ohm coil comes preinstalled in the Fireluke 3 so I left it in there and started my testing. I filled my tank with an 80VG green apple flavored ejuice and let it sit for a few minutes. From what I observed with this coil, it wicks really fast. Even with a thick ejuice like 80VG it didn’t take long for the coil to get fully saturated (between 5 and 10 minutes).

I get great flavor from the X2 double mesh coil which is rated for 40-80W. 40W feels much too cool for this coil and the flavor isn’t that great. Upping the wattage to 60W is warmer and better flavor but still a bit too mellow for my liking. 70W is where this coil really brings out the flavor from my ejuice and the warmth is just right.

The X1 mesh coil performs nearly the same as the X2 mesh coil but the flavor isn’t as intense. Still, the flavor that this coil gives is really good. Like the X2 mesh, anything under 70W feels underpowered and the vapor is too cool. At 70W and above the flavor really pops. How high above 70W you want to go will depend on how hot you like the vapor to be.

Both of these coils use SS904L mesh so I figured I would test them in TC mode as well. I had to do a bit of searching to find the correct TCR value for SS904L but I eventually found 85 to be the correct value. With the temperature set to 400°F the performance is heavenly. It throttles after a few seconds when I take a long draw but it’s not too aggressive. It feels like it’s correctly regulating the temperature and so far I’ve had no problems with dry hits.

Coil life is really good with these coils too. I’ve refilled with each coil at least 5 times (25ml+ through each coil) and they’re still going strong. I’m not sure if it’s the tea fiber cotton but these coils definitely retain their flavor.

The Maxus 100W fires pretty well instantly when I hit the fire button. It’s about as fast as many of my other mods and there’s no power lag. Battery efficiency seems to be good too as a 3000mAh, 20700 battery will get me through around two days of vaping at 70W.

The Maxus 100W kit is a two for one deal. You get a great single battery mod that can use a 21700, 20700 or 18650 battery and it’s great in power mode or temperature control. Plus, you also get the Fireluke 3 which has some of the best coils that I’ve tried so far. As a whole the kit is amazing so I would highly suggest picking it up rather than just getting the box mod. Trust me, the Fireluke 3 is a tank you’re going to want to try.