Uwell Caliburn AK2 Review: Better than the Caliburn A2? 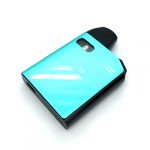 The Caliburn AK2 is just as good as the Caliburn A2 and possibly even better depending on how you like your draw. The tighter MTL draw of the AK2 is really nice and slightly more to my vaping preferences than the looser draw on the A2 which makes me want to use this more than my A2.

Aside from the draw, the two devices perform identically. Same battery life, same flavor output, and same ease of use. The AK2 is actually a little easier to use than the A2 because it does not have any buttons, but this also means there’s no button activated firing. That shouldn’t be an issue though because the draw activated firing on the AK2 is fine-tuned and works remarkably well.

Overall, the Caliburn AK2 is an excellent pod vape that easily gets my recommendation.

The Caliburn AK2 is the third iteration of Uwell’s popular Caliburn Koko pod devices. The Koko devices have always been companions that are similar to Uwell’s primary “Caliburn” pod vapes, but with a different form factor.

The Caliburn AK2 has dropped the “Koko” from the name but it’s still very much a Koko device, as you will learn in this review. This is the companion to Uwell’s Caliburn A2 and, like previous Koko devices, it’s similar in many ways but also a little different.

Which one should you get? The Caliburn A2 or the Caliburn AK2? I’ll answer these questions and more in this review.

Although the Caliburn AK2 is Uwell’s third “Koko” series device, it has gone back to its roots with its design. It looks like Uwell tossed the design of the Koko Prime to the side and instead refined the design of the original Caliburn Koko when making the AK2. Just take a look at the two previous Koko’s and you’ll know what I mean.

The Caliburn AK2 is a rectangularly shaped device with a flat front and back and rounded sides. The corner opposite the pod is cut at a slant and features a lanyard anchor spot to attach the included silicone lanyard.

This device is available in 8 colors and I am using the Turquoise Blue color for this review. The paint finish is good and has not faded during my use. However, I’ve dropped it on to pavement a few times and it has chunked out some of the edges to the bare silver metal. Be careful dropping this device because it shows the wear easily.

The AK2 is nearly identical in size to the original Caliburn Koko (which is a little smaller than the Caliburn Koko Prime). It’s a nice size for a pod vape. I don’t find it to be quite as portable as the slim pen shape of the Caliburn A2 but it’s not large by any means. It’s also light so it’s easy to wear it around your neck with the included lanyard and not notice that it’s there. 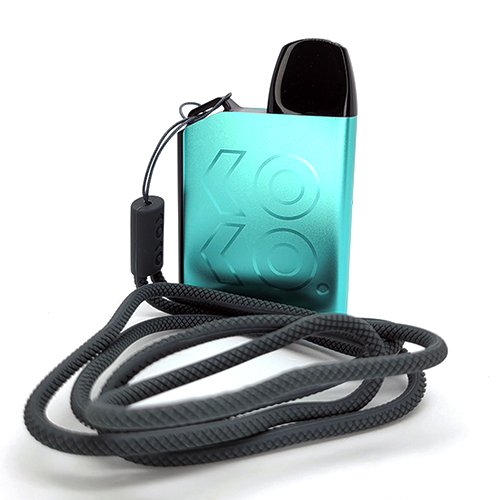 One side has the KOKO logo and the other has CALIBURN, decorative diagonal stripes, and “Keep on Keeping on” as well as a set of coordinates: E113.843°N22.601°. Punch those coordinates into Google Maps and you get what I believe is Uwell’s office in Baoan, Shenzhen, Guangdong Province, China. This was a neat little easter egg, even if I already had an idea of where I would end up once I punched in the coordinates.

The black plastic side of the AK2 has CALIBURN engraved into the plastic. The other side has a small airflow inlet and a slit LED indicator light.

Just like the Caliburn A2, the AK2 has an ejuice viewing window on the front side of the device. Also like A2, this window is only on one side. It’s useful for checking on your ejuice without having to remove the pod but having the window on the other side too would have made it easier to see. It’s usable to an extent, but I sometimes still have to take the pod out to check my ejuice and this kind of defeats the purpose of having the window in the first place.

The overall build quality of the AK2 is good and the design is a nice refresh on the original Caliburn Koko. The AK2 looks clean and modern without going overboard with a complete redesign. But as I mentioned previously, be careful about dropping it or it will start to look beat up very fast. 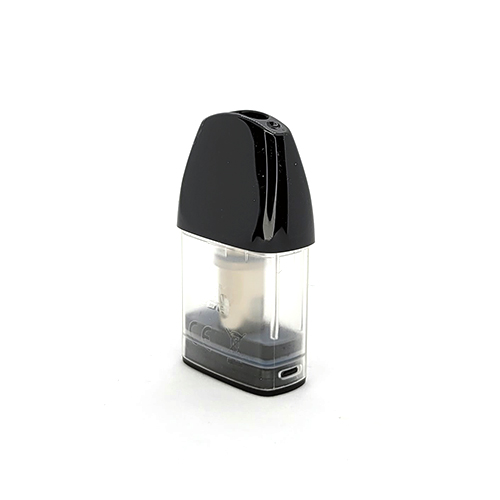 The mouthpiece on the AK2 is also the cap for the pod. It’s much more rounded than the pod on the original Caliburns and just looks and feels better. It’s worth noting here that these pods are not cross-compatible with the original Caliburn, Caliburn Koko, Caliburn Prime, or Caliburn G. They are only cross-compatible with the Caliburn A2. Squeezing the sides of the cap is an easy way to remove it because it won’t come off any other way — it’s on there pretty securely.

With the pod removed you’ll see the fill port which features a mechanism that is different from the A2. The fill hole is like a spring-loaded plunger; you have to push your bottle tip into the hole and push down to fill up. When you remove the nozzle, the hole will close itself. It’s super easy to fill but it can be messy if you fill quickly. If you fill up too fast, ejuice can come out of the air relief hole so fill slowly and steadily.

The pod attaches magnetically to the battery and the magnets are quite strong, however the pod pops out every time I drop the AK2 so they could be stronger. There is a tiny bit of pod wiggle if you try moving the pod around, but none in regular day to day use.

How to Use the Caliburn AK2 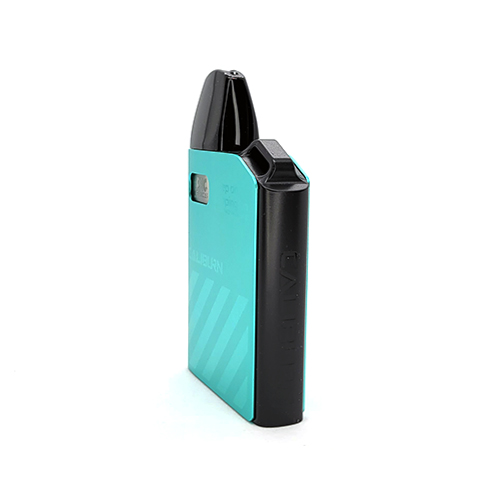 As part of Uwell’s “A” series devices, the AK2 is meant to be very easy to use. For those who are unfamiliar, Uwell has split their caliburn devices into two series: A and G. The A series uses pods with built-in coils, while the G series uses removable and replaceable coils. This makes the A series devices more suited to beginner vapers and those who want a device that is easy to use and vape with.

There are no settings to adjust on the AK2. Just pop off the top cap, fill it up, and you’re ready to vape. There are no buttons here either and the device remains in an “On” state at all times. To vape, draw on the mouthpiece and the AK2 will begin firing and producing vapor.

For a quick setup with the AK2, here’s what you do. Take your pod and squeeze the mouthpiece cap to remove it. From here, take your ejuice bottle and stick the nozzle into the red fill port on the top of the pod. Push down slightly and fill the pod up, then replace the top cap. Wait about 5 minutes for the coil to saturate and you’re ready to vape. Just pop the pod back into the device and draw on the pod to vape. 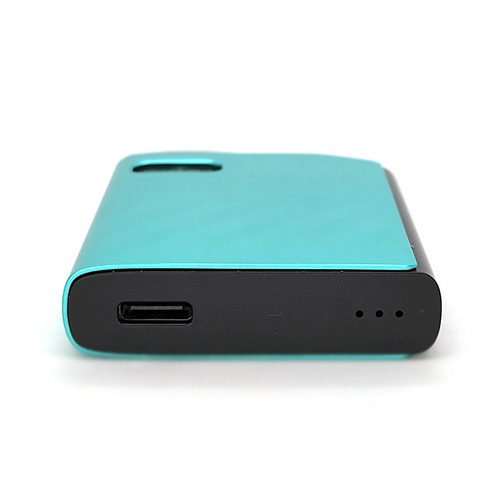 The 520mAh battery on the Caliburn AK2 is the same capacity as the one on the Caliburn A2 and they both fire at 15W. As a result, battery life between the two devices is nearly identical. You can expect to vape around a pod and a half of ejuice before having to recharge.

The AK2 has a Type-C charging port on the bottom of the device. Even though you may only get a pod and a half out of a full charge, that’s not bad at all when you consider that the AK2 recharges to full in only 45 minutes. This means that you’ll never be without it for too long.

When you draw there’s an LED indicator on the side of the AK2 that lights up to indicate your battery level. Green is over 60%, blue is 30-60%, and red is below 30%. When the battery dies the red light will flash 10 times in a row and refuse to fire. 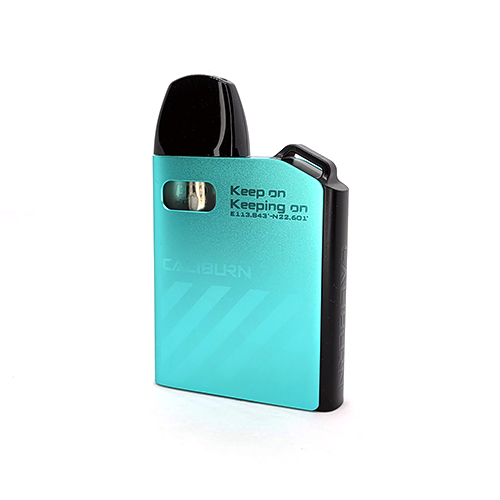 The performance of the AK2 is nearly identical to the performance of the Caliburn A2 but with one difference; the draw on the AK2 is tighter. It’s not a super tight MTL draw or anything, but it’s a tighter MTL draw than the loose MTL draw of the Caliburn A2. This is because the AK2 only has one airflow inlet on the side as opposed to the two on the A2. If you wished that the draw on the A2 was just a bit tighter, the AK2 is what you’ve been looking for.

Adding to the good results is the fact that the AK2 pods don’t leak. My pod and pod connection have both remained nearly completely dry during my testing, save for traces of ejuice here and there.

The Caliburn AK2 is just as good as the Caliburn A2 and possibly even better depending on how you like your draw. The tighter MTL draw of the AK2 is really nice and slightly more to my vaping preferences than the looser draw on the A2 which makes me want to use this more than my A2.

Aside from the draw, the two devices perform identically. Same battery life, same flavor output, and same ease of use. The AK2 is actually a little easier to use than the A2 because it does not have any buttons, but this also means there’s no button activated firing. That shouldn’t be an issue though because the draw activated firing on the AK2 is fine-tuned and works remarkably well.

Overall, the Caliburn AK2 is an excellent pod vape that easily gets my recommendation.

What do you think about the Caliburn AK2? Leave me a comment down below!