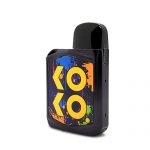 Uwell’s Caliburn series of pod vapes have long been some of the most popular vaping devices to date. It all started with the original Caliburn which quickly gained a cult-like following. Next came the Caliburn Koko, a similar device with a different design that was equally adored by vapers.

Since the release of these two pod vape titans, vapers have been patiently waiting for the next iterations of ‘Caliburn’ devices. Uwell has now released the Caliburn G (which I recently reviewed), and the successor to the Caliburn Koko, the Caliburn Koko Prime. 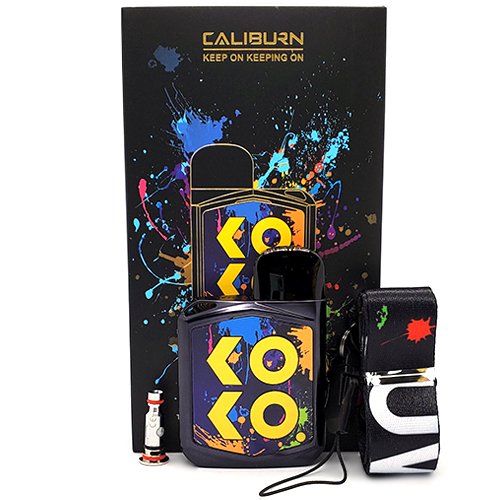 In terms of pure looks, the Caliburn Koko Prime isn’t radically different from its predecessor. It has been updated and refreshed with a slightly different design but it generally stays true to the look of the original Koko.

The original Koko was small, square shaped and very light. The Koko Prime is nearly identical in size but just a few millimeters wider and thicker at 68mm tall, 45.6mm wide, and 16mm thick. It’s a very small and compact device.

The biggest design change is the departure from the squared off, flat surfaces on the original Koko to curved and sloped surfaces with the Koko Prime. I think this design looks super modern and just screams ‘upgrade’. If you placed the two devices side by side, it would be instantly apparent which one was the old model and which one was new.

There are six colors available: purple, blue, grey, black, green, and red. Each one has a different color frame, as well as differently colored panels. These panels are magnetic and can be pulled off to be swapped out for another color. Eightvape and a couple of other online vape stores are currently selling these panels separately.

There’s a lanyard anchor spot located on the top side of the device, opposite the pod. The lanyard that comes in the box is similarly bright and attention grabbing as the panels with paint splatter, graffiti writing, and Koko and Uwell logos. The lanyard is really well made and super convenient to use. It clips closed at the neck to make putting it on or taking it off easy, and features a guide to tighten or loosen it around your neck. It also has a quick detach clip near the device for if you want to remove the Koko Prime from the lanyard. This is definitely the most convenient, most well thought out, and most useful vape device lanyard that I’ve used.

The pod is the exact same as the one for the Caliburn G. It clicks into place and has a rounded shape that makes it comfortable to vape on. When the pod is installed there are windows on the side of the Koko Prime that allow you to easily check your remaining ejuice.The pod holds 2ml of eliquid and takes Caliburn G replaceable coils. In the box with the Koko Prime you get two 1.0ohm Caliburn G coils.

How to use the Caliburn Koko Prime 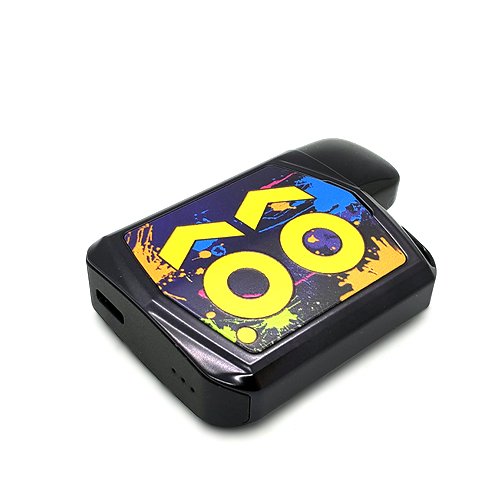 Even for a complete beginner to vaping, the Koko Prime is a quick and easy device to get started with. It takes replaceable coils so you will want to make sure that you prime the coils properly before vaping. Otherwise, it’s a straightforward device to use.

First, remove the coil that comes pre-installed in the pod by pulling it out. Take your ejuice of choice and drop a few drops of eliquid onto the cotton on the sides of the coil. After you’re done, take the coil and insert it back into the pod by lining up the flat edge with the flat edge on the bottom of the pod. The coil simply pushes back into the bottom of the pod.

The black mouthpiece on the pod also serves as the fill cap. Remove it by pushing it front to back or side to side. Because the mouthpiece is slick it can be a pain to remove at first, but once you remove it a couple of times it becomes much easier.

Fill the pod by sticking your ejuice bottle nozzle into the red gasket. Fill the pod up and let it sit for approximately 5 minutes to give the cotton time to absorb all of the ejuice. 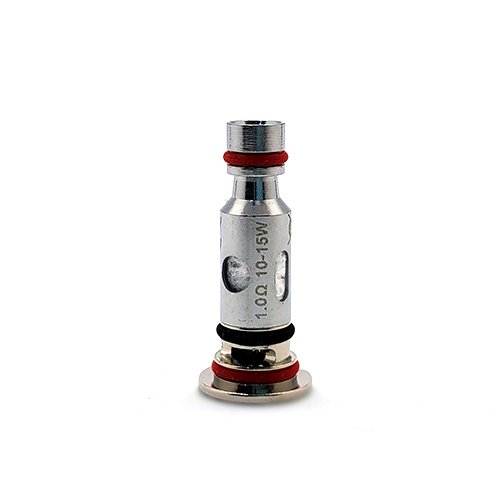 Two coils come in the box and both are the same: 1.0ohm Caliburn G Series Coils. There are also 0.8ohm coils available to be purchased separately (these come with the Caliburn G). 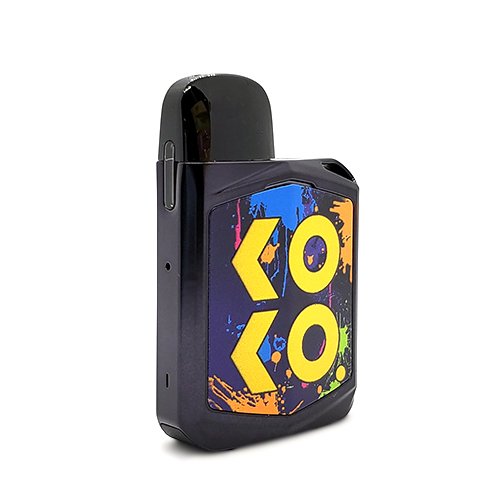 Oh how I love to see Type-C charging ports on new devices! The Koko Prime charges from completely dead to a full charge in 40-45 minutes. Being able to fully charge the device in under 45 minutes is huge and adds a ton of useability to the device. Unfortunately It can’t be used while it charges.

The Koko Prime has a higher maximum wattage output than the original (15W vs 11W) so it uses slightly more power, however this is offset by the increased battery capacity (690mAh vs 520mAh). You can expect to vape a pod and a half of ejuice before having to recharge.

When you draw there’s an LED that lights up to indicate your battery level. Green is 60%+, blue is 30-60%, and red is less than 30%. When the battery dies the red light will flash 10 times in a row and refuse to fire. 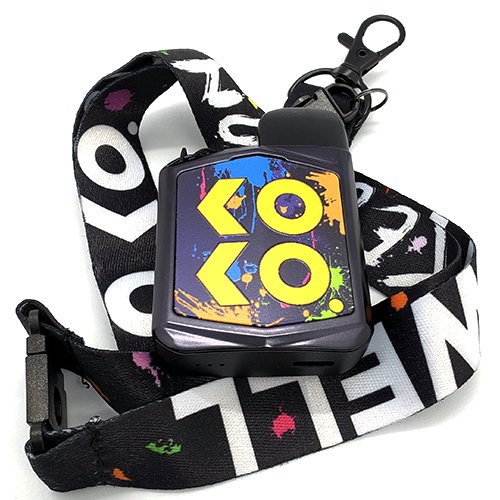 The original Koko was just like the original Caliburn, only in a different body. The Koko Prime is similarly just like the Caliburn G, only in a different body. I reviewed the Caliburn G very recently and as such, the performance is still fresh in my mind. There’s very little difference between the two devices, if any. Which one you get is going to come down to which look you like better. For those who haven’t read my Caliburn G review or who haven’t used the Caliburn G, I’ll go in depth on the performance of the Koko Prime for you.

One big thing to talk about is the airflow. Depending on how you insert the pod you can get either a loose MTL draw or a tight MTL draw, both of which are significantly more restricted than the draw on the original Caliburn and Koko. I liked the draw of those devices, but always desired for just a slightly tighter draw. If you liked the looser MTL draw that the originals delivered, be aware that the Koko Prime will not give you as loose of a draw.

Flavor is top notch with these coils. Just like the 0.8ohm coils that come with the Caliburn G, these 1.0ohm coils deliver rich, warm and flavorful vapor that beats out the rest of the pod vape competition. The flavor is downright impressive and, with the exception of the Caliburn G which is equally good, better than any other pod vape I’ve tried thus far.

A 3-6mg nicotine ejuice still delivers a nice draw and throat hit, despite being used in such a low powered device. However, nicotine salts are where it’s really at with the Koko Prime. A 35mg nicotine salt ejuice delivers an excellent throat hit that I find is just perfect. It’s a satisfying and smooth draw.

Performance issues have been virtually non-existent. I’ve had no leaking from the coils, but I have had a little bit of condensation build up on the bottom of the coils. Nothing concerning but it’s worth mentioning in this review. Just like when I tested the Caliburn G, I used a 50VG, 65VG, and 70VG ejuice and none of them leaked. These 1.0ohm coils keep up with chain vaping perfectly and I never once came close to a dry hit.

In addition to the fantastic wicking capabilities, coil life is also fantastic. I’ve refilled the pod using a single coil more times than I can count but I believe I’m somewhere around 12 refills. Only recently has the coil started to taste a bit off so I’ll likely end up changing it in the near future.

The Koko Prime is another amazing pod vape from Uwell. It brings the same equally amazing performance as the Caliburn G, only in a different shape with a more colorful design. If the colorful panels aren’t your thing, keep in mind that you can remove them for a less flashy, subtle look.

The only issue with the Koko Prime is that the fill cap is difficult to remove, but it becomes easier with time. Other than this, I can’t find another fault or anything that would prevent me from recommending this device.