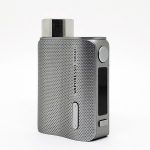 Vaporesso have released yet another mod and this time it’s the Swag II. It sticks to nearly the same design and shape as the original Swag but now it has a rubberized coating like the GEN and also uses Vaporesso’s newest AXON chipset.

Is the Swag II the single battery mod to buy? 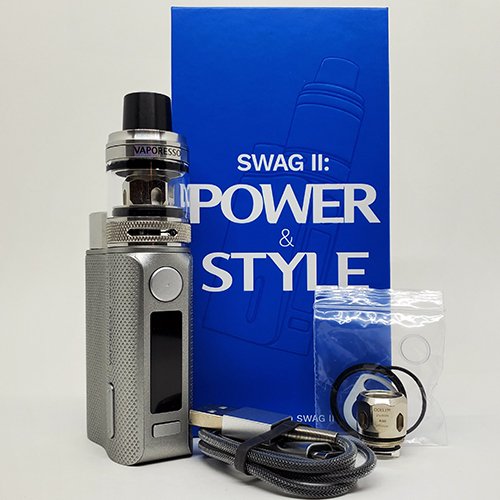 The Swag II is like a mix of the Eleaf iStick Pico and the Vaporesso GEN. It’s small and compact like the Pico and it has a battery cover that sits next to the tank. It also has the same rubber coating as the GEN, as well as the same screen & menu.

The rubber coating feels awesome. Since the Swag II is primarily made out of plastic it makes the device feel newer and more premium. It’s also one of the things that I liked the most about the GEN so I’m glad that they implemented it on the Swag II. Thanks to this plastic and rubber paint combo the Swag II remains feathery light, even with a battery installed.

At 75mm tall the Swag II is short but it has the battery cap sticking out on top of it. Because of this cap a 25mm tank is the largest that the Swag II can accommodate. Plus, the Swag II is only 25mm wide so anything larger would overhang anyway.

The threading on the battery cap is smooth as butter and it comes off or goes on easily. A single 18650 battery fits snug but not too tight and there’s no battery rattle at all. In addition, there are venting holes on the bottom of the device just in case of a battery incident.

The body of the Swag II has a slight curve on one side and, depending on the hand I use, my fingers rest right in the groove. If I use my left hand it’s more comfortable to fire with my index. Using my right hand feels better with my thumb.

There’s minimal branding on the body: a Vaporesso “V” on the bottom center of one side and “Vaporesso Swag II” on the other. It’s not too in-your-face and I like that.

The fire button on the Swag II is the same as the GEN only it’s smaller. It’s small and round with a dimple in the center and it’s placed at the front of the mod — standard placement. But the adjustment buttons are placed in an awkward position on the side of the mod, just like the original Swag.

The 0.91” display is also the same as the one on the GEN. It’s simple but it works. I think it’s bright enough when set at 5 but if you want it brighter it can be turned all the way up to 10 in the menu settings. 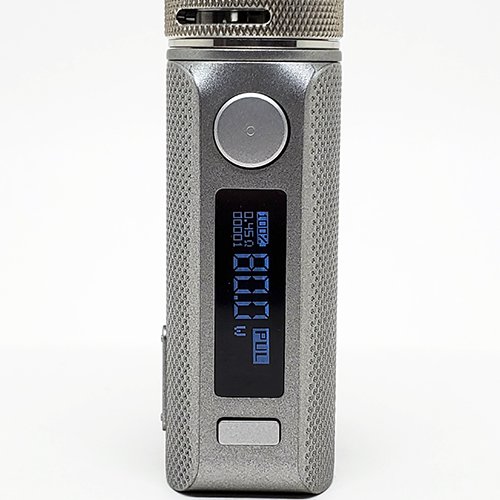 The Swag II is a single 18650 mod and as such it will only fire up to 80W. It comes with lots of modes; pretty much every mode you could want, and then some!

Pulse mode was first introduced on the GEN and it’s nearly the same as regular wattage mode. The difference is that it pulses the wattage every 0.2 seconds when you take a draw. This is supposed to make the vapor more flavorful and dense but it’s a small difference if any from wattage mode.

Smart TC mode automatically detects your coil material and then sets the correct TC mode. But in my testing the Swag II sometimes had trouble correctly identifying my coils. If this happens you can always use the regular Temperature Control mode and set the correct material but I think that this feature could use some tweaking.

There’s a rectangular, dedicated menu button under the screen. Pressing it three times opens the menu. Also, this menu button is used to select options; not the fire button.

If you pick up the Swag II kit then you’ll also get the NRG PE tank. It has a 25mm diameter and fits perfectly on the Swag II. It’s a nice tank with knurling on the airflow control ring and “Vaporesso” printed directly below the fill cap. The drip tip is wide-bore, 510 delrin drip tip. It’s good but it looks plain.

The NRG PE doesn’t come with a bubble glass and ships with a straight glass tube. It holds 3.5ml of eliquid. It’s a small tank size and not the largest capacity tank by any means. Due to this, I sometimes found myself refilling the tank twice a day so I had to keep my ejuice close.

The top cap swivels open with a push and the fill port is surrounded by a silicone guard. It’s a standard size fill port that will fit all bottle types. The top cap seals the fill port well enough when closed that I haven’t had any leaking issues.

The NRG PE has two wide airflow slots and the ring is on a stopper. It’s easy to turn but firm enough that it stays in place wherever it’s set.The threading on the tank is smooth and the build quality is good.

I used the NRG PE with the Swag II and the results I got are just okay. The 0.15ohm GT4 coil says it’s best at 60-70W and I found that  accurate. I got the best out of the coil at 65W. Flavor is good but not great. It’s not a coil that I mind using but there are better ones out there.

The 0.5ohm CCELL coil vaped best right at 30W but it’s just decent and I’ve had much better. I liked vaping this tank with the airflow closed up to around half for a denser and more restricted draw.

My verdict for this tank is that unless this is your first kit, it’s probably not worth it. You probably have a better tank already if you’ve purchased that tank outside of a kit. But the NRG PE isn’t a bad tank and they’re not bad coils. Maybe I’m just being too picky.

When it comes to performance the Swag II is like a mini GEN. It’s just as good to vape with in power mode but because it only fires up to 80W, it’s better suited to coils that don’t require a lot of power.

The soft, normal and hard wattage modes are excellent. The draw is consistent and the Swag II feels like it’s outputting the correct wattage. A draw at 65W feels like it should which is strong and warm. It outputs power instantly too with zero delay. Really good wattage mode performance.

Pulse mode isn’t much different from wattage mode but lately I’ve found myself using it more. The draw feels a bit smoother and maybe the flavor is a bit better as well. I can’t say with 100% certainty.

Oddly enough Temperature Control mode doesn’t seem to work as well as it did on the GEN. I thought that they use the same chip but maybe I’m mistaken. The Swag II just feels underpowered and doesn’t provide the draw that it should in TC mode. It’s weak and inconsistent at best. Not a good TC showing.

Vaporesso have done a great job with the Swag II. Temperature control performance is lacking but everything else is excellent. It’s a nice mod that makes a great companion for taking on the go without taking up too much space.

The NRG PE tank is decent for a first tank but otherwise I would skip the kit and just get the mod.

What are your thoughts on the Swag II? Leave a comment below!