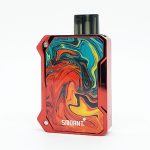 Smoant might not be as well known as other vaping companies but they’ve actually been making vape mods for some time. They made the popular Cyclon and Ranker mods and most recently had success with their Battlestar mod. Lately they’ve been coming out with pod vapes and I had a chance to review the Smoant Pasito a few months back. It was a really good device, especially for their first pod vape.

The Battlestar Baby is their newest pod vape and from first looks, it reminds me a lot of the Voopoo Drag Nano. It uses pods that have a 2ml capacity and takes replaceable coils. It also has a built in 750mAh battery, a maximum, constant wattage output of 15W and uses Smoant’s ANT chipset.

The design looks good and so do the features. But is the Smoant Battlestar Baby worth your money? Keep reading to find out.

This device was sent to me for the purpose of this review from Vaporl. 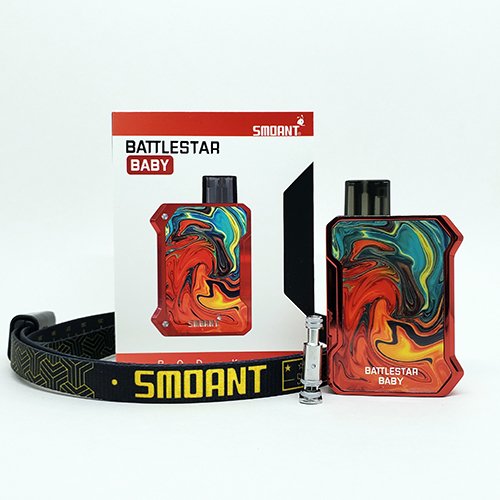 Before I even start talking about the mod, I’ve got to mention the lanyard that comes with it. It’s actually a USB Type-C cable and it’s fully functional. There are clips on each side of the Type-C cable that clip into the lanyard holder.

It looks like any other lanyard from the outside. It’s got Smoant branding on one side and a functional measuring tape on the other. It’s truly a multi-purpose lanyard! What a neat and useful idea. I’m surprised no other companies have thought of this before. I’m worried that durability might be an issue but I’ve used it for two weeks and it’s still working fine. But I wonder how it will hold up after a few months.

When I first took it out of the box all I could think about was how similar it looks to the Voopoo Drag Nano. It has the same sort of shape and appearance but the Battlestar Baby is just a bit taller, wider and thicker:

Not much of a difference. It’s still a very tiny pod vape and it’s easy to bring out of the house without bulking me up or weighing me down. It weighs a light 78g.

The body of the Battlestar Baby is made out of zinc-alloy and the paint is electroplated on. It’s a shiny mirror finish paint and it looks very good. The panels on the front and back look like resin but according to Smoant’s website they’re made of “CPR”.

Apparently, CPR is wear resistant and has a high-gloss appearance. It’s also resistant to smudges and fingerprints. So they aren’t real resin panels but they still look gorgeous. I can’t knock how they look.

This is a draw activated pod vape so it has no buttons. This also means that it doesn’t have adjustable wattage. The wattage goes from 10-15W though and fires according to the pod that is being used. 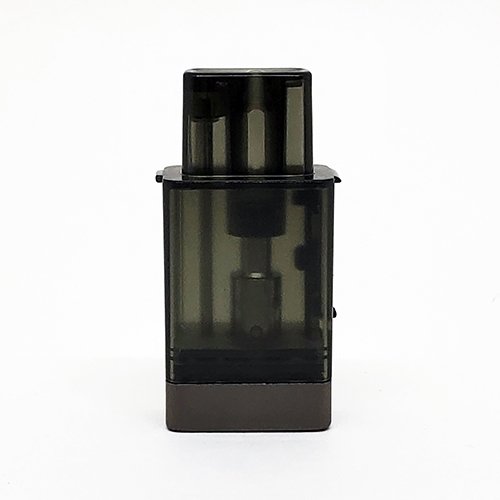 The Battlestar Baby comes with a single pod. It has a dark tint to it that makes viewing the ejuice level difficult unless it’s held up to the light. It’s a big pod that will hold up to 2ml of ejuice.

There’s some wiggle when the pod is inserted and the magnets don’t feel strong enough. It’s much too easy to remove the pod from the device. In any case, I haven’t had the pod come out accidentally.

The mouthpiece on the pod is also very similar to the Drag Nano. It’s thin and rectangular in shape. It’s comfortable to vape on and feels nice on my lips.

The fill port is plugged by a rubber stopper but it’s really thin and small. There’s a tab to help lift the plug but I still had trouble getting it out, even with my long nails. Once I did get it open, I was disappointed by the size of the fill hole. It’s ultra small. It’s a circle just wide enough to fit the tip of an ejuice bottle. Dropper bottles are a no-go. 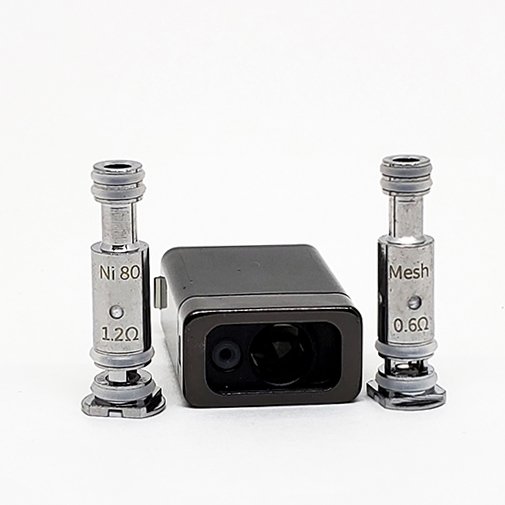 Both coils use organic cotton as the wicking material and have the same external size and shape. These coils are plug and play so they’re easy to install or remove. All it takes is pushing the coils into the base of the pod and they’re good to go.

The 0.6ohm coil wicks well with thicker ejuices like 70VG or 80VG but I had leaking when I used a 50/50. In my experience this is a coil better suited for high VG ejuices.

The 1.2ohm coil on the other hand wicked everything without an issue. I used ejuices from 50/50 to 80VG and it wicked perfectly without any leaking.

I had some condensation under the pod after long vaping sessions though and this happened with both coils. Not a big issue but I thought that I should let you guys know anyway!

As for coil life, the 0.60ohm coil is below average. I used it for only 5 days before it started to taste burnt. I’d expect to get at least a week minimum. The 1.2ohm coil fared better and has lasted 7 days so far and it’s still going strong. 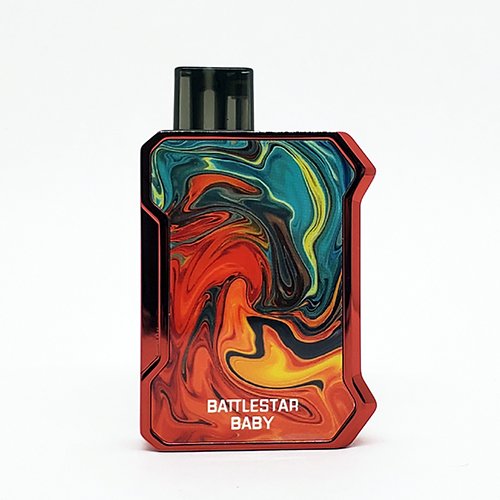 The Battlestar Baby doesn’t have airflow control so the draw that it delivers is what you get. I also didn’t find a difference between the two coils. They both give the same MTL draw but it’s a tight enough draw to satisfy me. 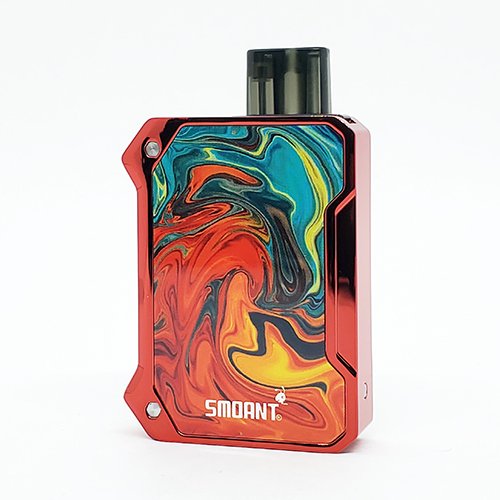 A 750mAh battery comes packed into the Battlestar Baby and it’s been giving me some impressive usage times. I averaged about two days of moderate to heavy use while using the 0.6ohm coil before I had to recharge. That’s really good, especially for such a baby of a pod vape.

There’s an LED light on the side of the Battlestar Baby that lights up whenever you take a draw. The LED lights up in three colors to indicate the battery level:

While charging, the LED’s are almost the same:

I used the included Type-C cable/lanyard to charge and it worked just the same as any other Type-C cable would. I got from dead to fully charged in 50 minutes. Pretty speedy. The Battlestar Baby also supports pass-thru charging if you’re really antsy and need to hit your vape. 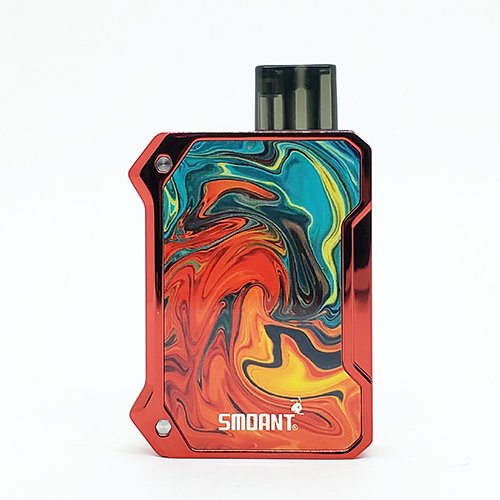 As I mentioned in the Airflow section earlier, the draw from the Battlestar Baby is a MTL draw. This doesn’t change with the coils and remains the same draw no matter which coil I use. Overall performance is good and I’m pleased with the flavor from the 1.2ohm coil. However, the 0.6ohm coil isn’t anything special.

The Battlestar Baby is a constant output device so the draw remains the same, even as the battery dies. I didn’t notice a difference between when it was nearly dead or fully charged; the draw is consistent.

I’ll start with the 0.6ohm coil because it’s the one that comes pre-installed and the one that I tested first. It works well with 70VG+ ejuices but anything thinner left me with a pool of ejuice in the battery. The flavor from this coil is alright but it isn’t anything exciting or special. Flavor is muted to a small degree and doesn’t taste as full as it should. It’s definitely not the worst coil I’ve used but it’s certainly not the best.

The 1.2ohm coil saves the Battlestar Baby. The flavor is crisp and clean and there’s no muting whatsoever. This coil also wicks well with anything from 50/50 to 80VG/20PG so it’s versatile too. Nicotine salts deliver a strong throat hit with just the right amount of kick. It’s a satisfying coil to vape on. I might actually have to pick myself up a pack of these.

The Battlestar Baby is a good pod vape but it’s not as good as the Smoant Pasito. I’d rate this device a bit below but it’s not too far off. It’s a good and simple device that performs excellently with the 1.2ohm coil but the 0.6ohm coil could be a lot better.

If you ask me, I think it’s still a device worth picking up. It’s small and portable and I really like the draw. The throat hit is great so it makes an excellent vape for nicotine salts. So If you’re thinking of getting one, I say go for it. Just make sure to grab an extra pack of the 1.2ohm coils.